Blake’s Babe in the Woods

Blake’s longest lyric fable, “The Little Girl Lost” and “The Little Girl Found,” appears to be influenced, in its plot and illustration, by the English ballad called “Babes in the Wood” or “Children in the Wood.”1↤ 1 The ballad is suggested as “source of analogy” for Blake’s lyrics by Irene H. Chayes in “Blake and Tradition:[e] ‘The Little Girl Lost’ and ‘The Little Girl Found,’” Blake Newsletter 13 (August 1970), p. 25. The sixteenth century ballad Blake would have known from the copy he owned of Percy’s Reliques of Ancient English Poetry (1765). The ballad, moreover, was popular in contemporary chapbooks. Not many of these survive from the eighteenth century, and few of those that do are illustrated. But we have some chapbooks from the early nineteenth century which contain the ballad “Babes in the Wood” and illustrate it in a manner indicating that Blake’s illustration of “The Little begin page 36 | ↑ back to top Girl Lost” may be based on illustrations of the ballad in the chapbooks of his time. In fact, the picture on Blake’s first page of the song can hardly be called an illustration, since nowhere in the song’s lyrics does a young man embrace Lyca. Rather, Blake’s human figures embracing beneath a tree seem to be a pictorial allusion to the ballad as it would have been illustrated in Blake’s time.

The climax of the ballad, which is the episode most conducive to illustration, occurs after a boy and his sister have failed to find their way out of a forest in which they have been abandoned by their wicked uncle. They lie down and die for lack of nourishment. As Thomas Percy records the ballad,

Thus wandered these poor innocents
Till deathe did end their grief,
In one anothers arms they dyed,
As wanting due relief:
No burial ‘this’ pretty ‘pair’
Of any man received,
Till Robin-red-breast piously
Did cover them with leaves. (III, p. 176)

This is the passage illustrated in a Banbury chapbook published by J. G. Rusher in about 1815 (illus. 1), and in a chapbook published by Benjamin Tabart in 1804 (illus. 2), reprinted by William Godwin in Tabart’s Collection of Popular Stories in 1809.2↤ 2 The reproductions of the chapbook illustrations appear by courtesy of The Osborne Collection of English Children’s Books, Toronto Public Library. The illustration on the first page of “The 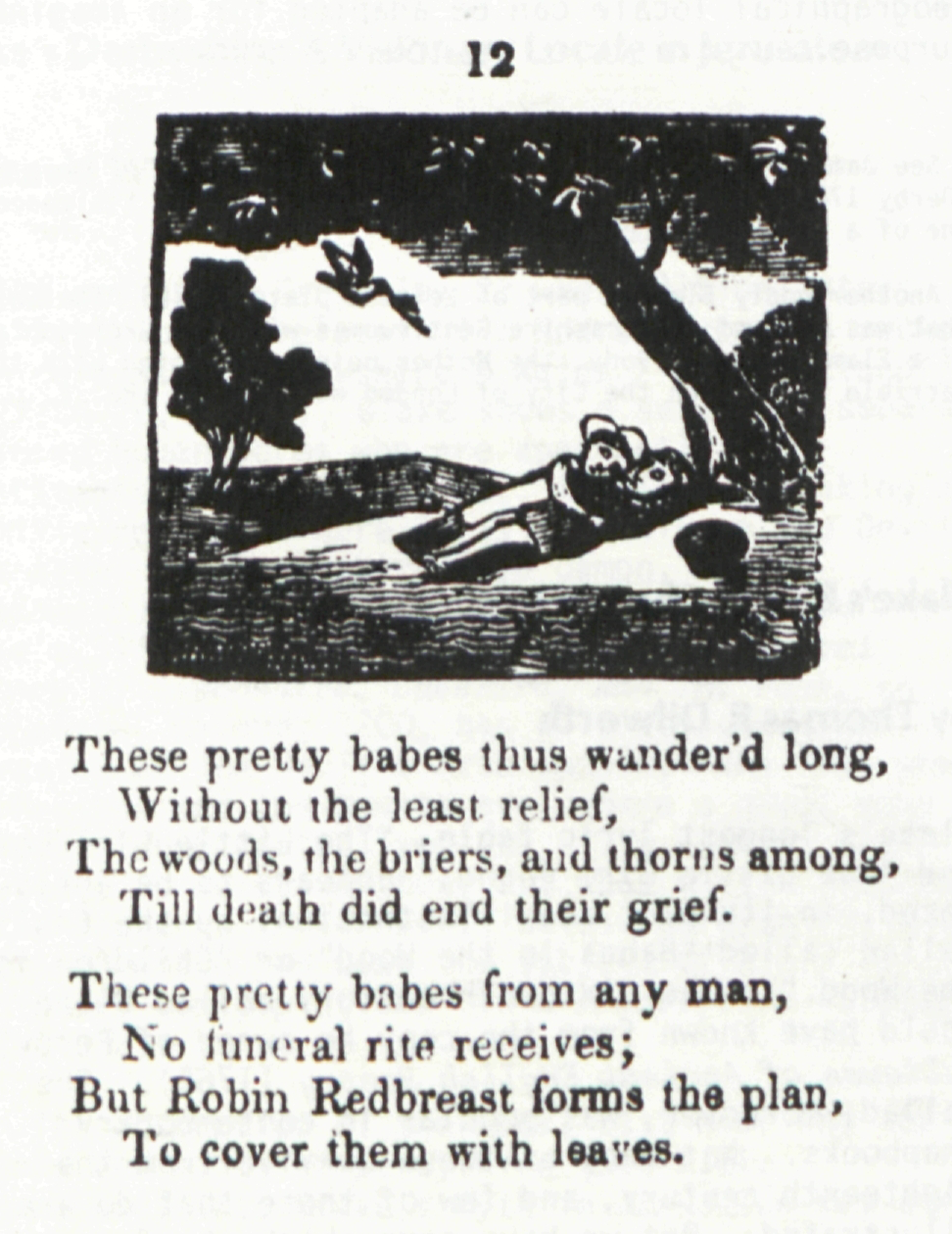 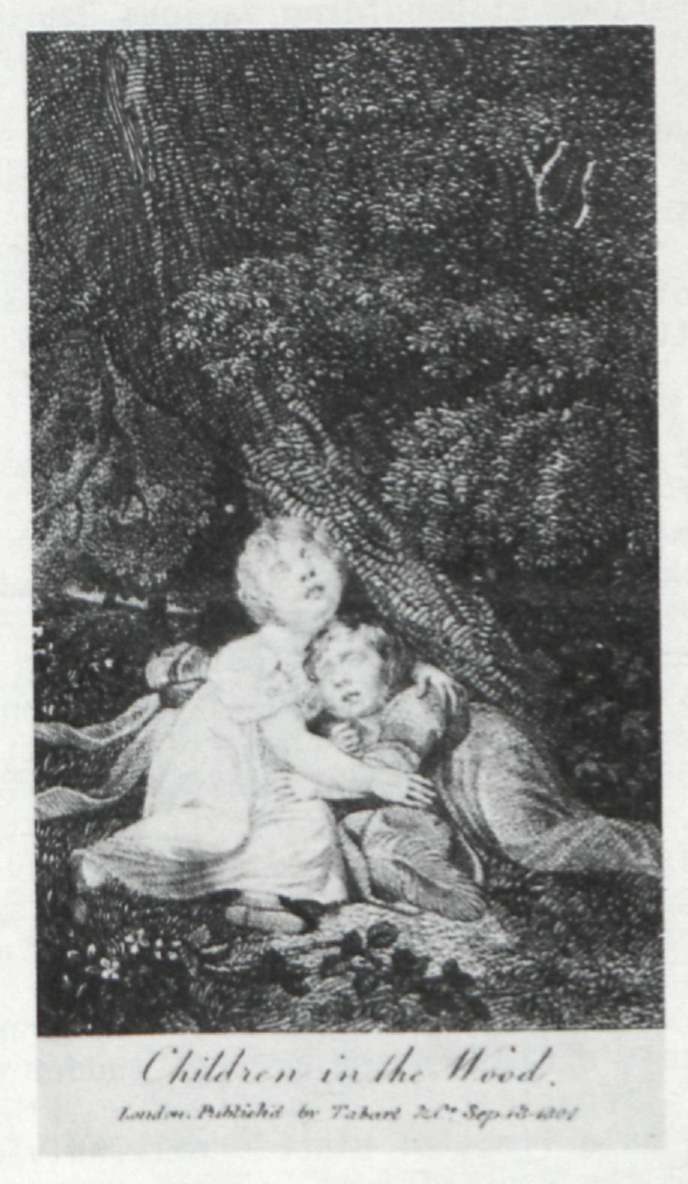 [View this object in the William Blake Archive]
begin page 37 | ↑ back to top Little Girl Lost” is remarkably similar in composition to the ballad illustrations. Blake’s Lyca and her companion embrace beneath a tree that grows out of the picture’s left-hand side. Above them flies a bird corresponding to the robin in the Banbury chapbook illustration. In fact, Lyca appears to be pointing to the bird directly overhead.

The similarity between the ballad and Blake’s songs extends further. Lyca, lost in a forest, sleeps in a protracted manner that suggests death. Moreover, lions befriend her, and in “Night” lions are shown to be amiable only after death. (The Lyca songs were originally grouped along with “Night” in the Songs of Innocence.) Her transfer to a cave by beasts seems a sort of funeral and recalls the kindness of the ballad’s robin. The children in the ballad die of starvation. In “The Little Girl Found,” Lyca’s searching parents dream she has starved. In the ballad, seven years elapse before their bodies are discovered by humans. This period may have a numerical echo in the seven days that pass before Lyca is found. The seven years of the ballad may also be reflected in the age given to Lyca who, though she is obviously post-pubescent in the illustrations to the songs, is said to be “Seven summers old.”

The focus of the relationship between the ballad and Blake’s songs is death’s double meaning. Blake’s illustrations indicate that nubile Lyca’s dying is sexual and takes place in her lover’s arms. If Blake did have the ballad in mind as he wrote his two songs about Lyca, his sexual theme may have been suggested to him by two lines already quoted from Percy that seem especially charged with sexual connotations: “In one another’s arms they dyed, / As wanting due relief.”