Although it will probably be difficult to find, this very good reproduction of one of the great copies of Blake’s Songs may occasionally appear in used-book stores; because it was marketed as a collectible object rather than published as an ordinary book, it has so far escaped the attention of Blake’s bibliographers. Superficially, the volume manages to be pretentious but not prepossessing. It is bound in brown leather and features yellow watered-silk endpapers, a marking ribbon, a hubbed spine, gilt edges all around, a frontispiece of the Linnell portrait of Blake from the Fitzwilliam, and ungraceful gilt stamping on the cover and spine. The leaves—of appropriately heavy (but not avowedly acid-free) matte paper—are practically the same size as those of the original (21.5 × 14 cm.).1↤ 1 Notes from the Editors, a somewhat dizzy 22-page promotional pamphlet for this volume that was discovered and brought to our attention by Robert N. Essick, describes the paper as “70-pound Franklin Library Vellum White” (22). Issued in April 1980, it was the sixty-eighth of a variously sized and bound series of collectible editions of “The Hundred Greatest Books of All Time” from the Franklin Library (an affiliate of the Franklin Mint, purveyers of such collectibles as Elvis commemorative plates). When telephoned, the Franklin Library was at first reluctant to answer inquiries about itself, the scope of its offerings, or this volume, but eventually revealed that the reproduction of Songs was never available except as part of the complete set of one hundred

Songs, copy U, general title page.   Franklin Library reproduction.
books, which cost about $4000, and that it is long out of print.

In spite of such unpromising auspices, and the general inferiority of the other volumes in this series, this reproduction of Songs copy U is of high quality—someone (the Franklin Library’s representative suggested that the person departed long ago) lavished considerable thoughtful attention upon its production. Scholars, libraries, and collectors of Blakeana should all wish to acquire it. Most readers of this journal are familiar with the various reproductions of the Rosenwald-Library of Congress copy of Songs copy Z, which range in quality from the magnificent Blake Trust collotype and stencil facsimile (1955) to the Orion/Oxford six- and eight-color offset reproduction (1967/1970) to the blurry but inexpensive Dover edition (Experience only, 1984). In contrast, copy U of Songs has been reproduced as a whole only once before, not very well, by Quaritch in 1893, and since then only single pages from it have appeared in print: in Erdman’s Illuminated Blake (general titlepage and “Introduction” to Innocence), Johnson and Grant (general titlepage, in color), and accompanying Grant (“The Tyger,” in color).2↤ 2 For more complete information on reproductions of the Songs see Grant and Johnson, and Wilkie.

Copy U itself is a beautiful copy, comparable in degree and quality of finishing to the better-known, probably later, beautifully colored copies Z and AA (at the Fitzwilliam). Most pages bear extensive delicate outlining in ink, and its general titlepage contains unique variants; some of these are discussed by Erdman (42, 386). The arrival of the book at Princeton in 1967 was heralded by Morton D. Paley in this journal, and its general character has been well described by Ryskamp, following Keynes and Wolf: “54 plates on 54 leaves. Watermark [RUSE & TURNERS] 1815. Printed in red-brown; ‘elaborately and brilliantly painted with water-colours and opaque pigments, heightened with silver and gold; each plate within a single framing line. Foliated by Blake 1-54’” (38).

The Franklin Library edition is not a scholarly reproduction, and it has some characteristics that might mislead one expecting it to be exactly like copy U.3↤ 3 See Tanselle for a review of some problems presented even by serious scholarly facsimiles. The color quality, of course, varies, and the register is sometimes appreciably off, especially in those plates that use black ink: for example, plates 1, 2, 20, 29, 40, and 44 are all too dark, and 40 is seriously out of register in the copy we have examined. Grant’s notes on the original indicate other discrepancies as well, but it would not be useful to report these until the reproductions and the original have been compared side-by-side. What is more notable is that the plate sizes in the reproduction vary from the originals by as much as a centimeter (vertically). More deliberately, Blake’s foliation, written at the upper right hand corner of each design (within the framing line), has been silently removed, even though the numbers accurately indicate the page sequence and would not really compete with the alternative pagination in conventional printing. The begin page 261 | ↑ back to top edition also provides a transcription of the text on the verso facing each plate page; the punctuation has been normalized more or less as Keynes did in the Orion/Oxford facsimile (e.g., line 16 of “The Tyger” has a question mark rather than Blake’s printed exclamation point).

As offset reproductions of illuminated books go, however, this is a decided success. On the average it is somewhat less muddy in color and sharper than the Orion/Oxford facsimile of copy Z, partly because Blake’s delicate outlining of details comes off well. It is not possible to reproduce Blake’s most elaborately colored pages (such as these) by offset lithography without some murkiness and flatness in the colors, and this edition has its share of dead spots and infelicities. Yet all the images are at least plausible, even though no more than four ink colors were used in printing, and most of these reproductions are about as good a job as ordinary offset can manage. The printing inks themselves are transparent, but the presence of “opaque pigments” mentioned by 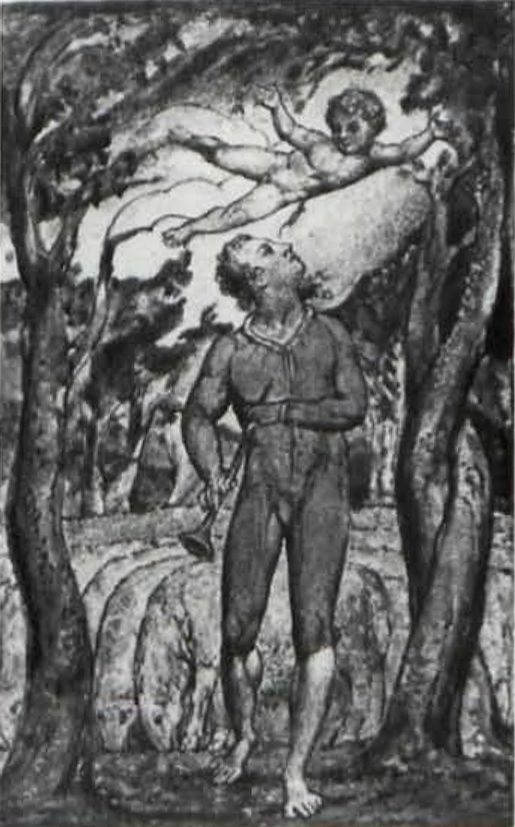 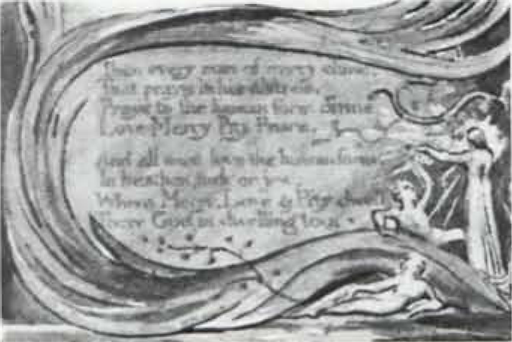 Detail, Songs, copy U, “The Divine Image.”   Franklin Library reproduction.
Keynes and Wolf is sometimes easily discernible, as on plates 13 and 18, where a pale blue-white suspension has been used to create halo effects; the metallic silver and gold they also mention are, of course, not in evidence.

Finding a copy of this edition will require haunting rare book stores, though for now one will probably do best at the least pretentious places. Several other large series have been offered by the Franklin Library in similar bindings, but a book dealer who has one volume from this set may have more or know where to get them. Some purchasers of “The Hundred Greatest Books of All Time” are selling individual volumes (or the whole set) for a fraction of their cost, and used-book dealers in the Midwest are asking twenty to thirty dollars apiece. On the other hand, the very impressiveness of this particular book might make a collector who was otherwise disenchanted with Western Civilization according to the Franklin Library more likely to hold on to it alone.

Notes from the Editors: Songs of Innocence and of Experience by William Blake. Franklin Center, PA: Franklin Library, 1980.