In an article published some years ago,1↤ 1 “A Cornish Artist Edward Calvert, 1799-1883,” The West Country Magazine Vol. I, pp. 43-6. Mr. Geoffrey Grigson commented on reminiscences of Cornish scenery in Edward Calvert’s visionary engravings. He mentioned in general the landscape in the valley of the Fowey north of Lostwithiel, and in particular the castle and steep slope of Restormel, which he thought might be reflected in the wood-engraving, “The Lady and the Rooks.” I too referred to this in my monograph on Calvert.2↤ 2 Edward Calvert (London: 1962), p. 86. “The Lady and the Rooks” is number 13 in the catalogue in that book (p. 105). 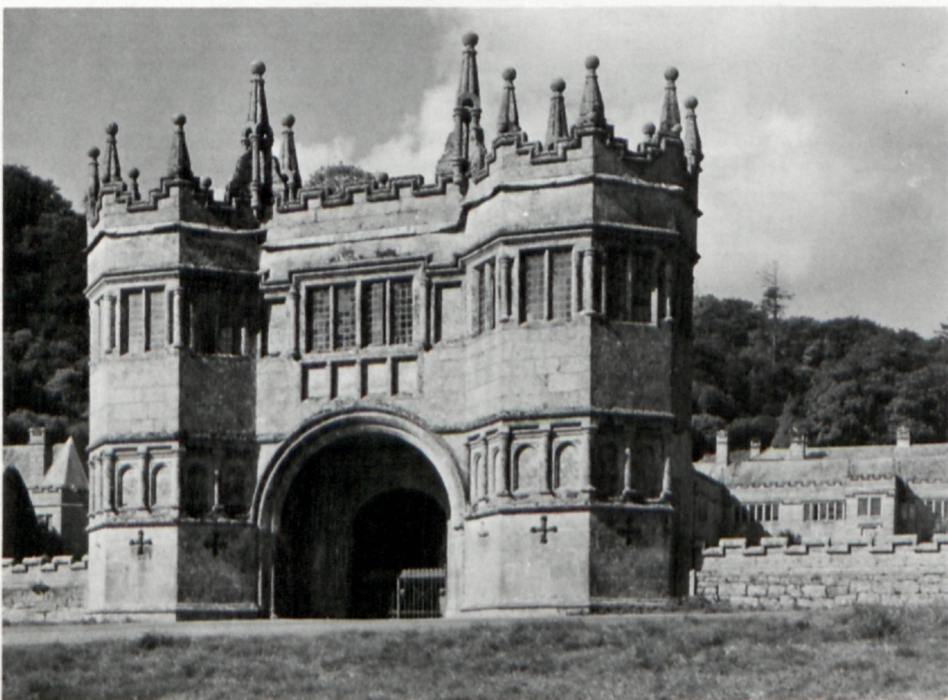 The Gatehouse, Lanhydrock House, Cornwall (1658).   A Property of the National Trust.

I recently revisited Cornwall after an interval of twenty-two years, and took the opportunity of looking at the castle of Restormel (twelfth-thirteenth centuries) and its surroundings. It is in a splendid setting, similar to that in “The Lady and the Rooks,” with the ground everywhere steeply sloping away, revealing lovely views. Yet the Romantic building in the background of Calvert’s engraving has nothing in common with the stark lines of Restormel itself, and I left feeling less convinced than before about the association.

Later during the same afternoon, I visited Lanhydrock House, near Bodmin, seat of the Robartes family. It is a late nineteenth century Romantic building, replacing one of the seventeenth century, the larger part of which was destroyed by fire in 1881.

One structure unaffected by the fire was the granite gatehouse, built between 1636 and 1651, which, as I first looked at it, seemed familiar. I had by this time dismissed “The Lady and the Rooks” from my mind, but it came back now with redoubled force. If Calvert based his design on Cornish landscape and details, this gatehouse was surely what he had in mind. For, although the detailing of Calvert’s building (which could be the side of a gatehouse) and that at Lanhydrock are somewhat different, they have enough in common to make the identification likely.

And not only the structure, but the wooded setting, is remarkably like that in the engraving, perhaps not sloping so dramatically, but sufficient to have provided the inspiration.