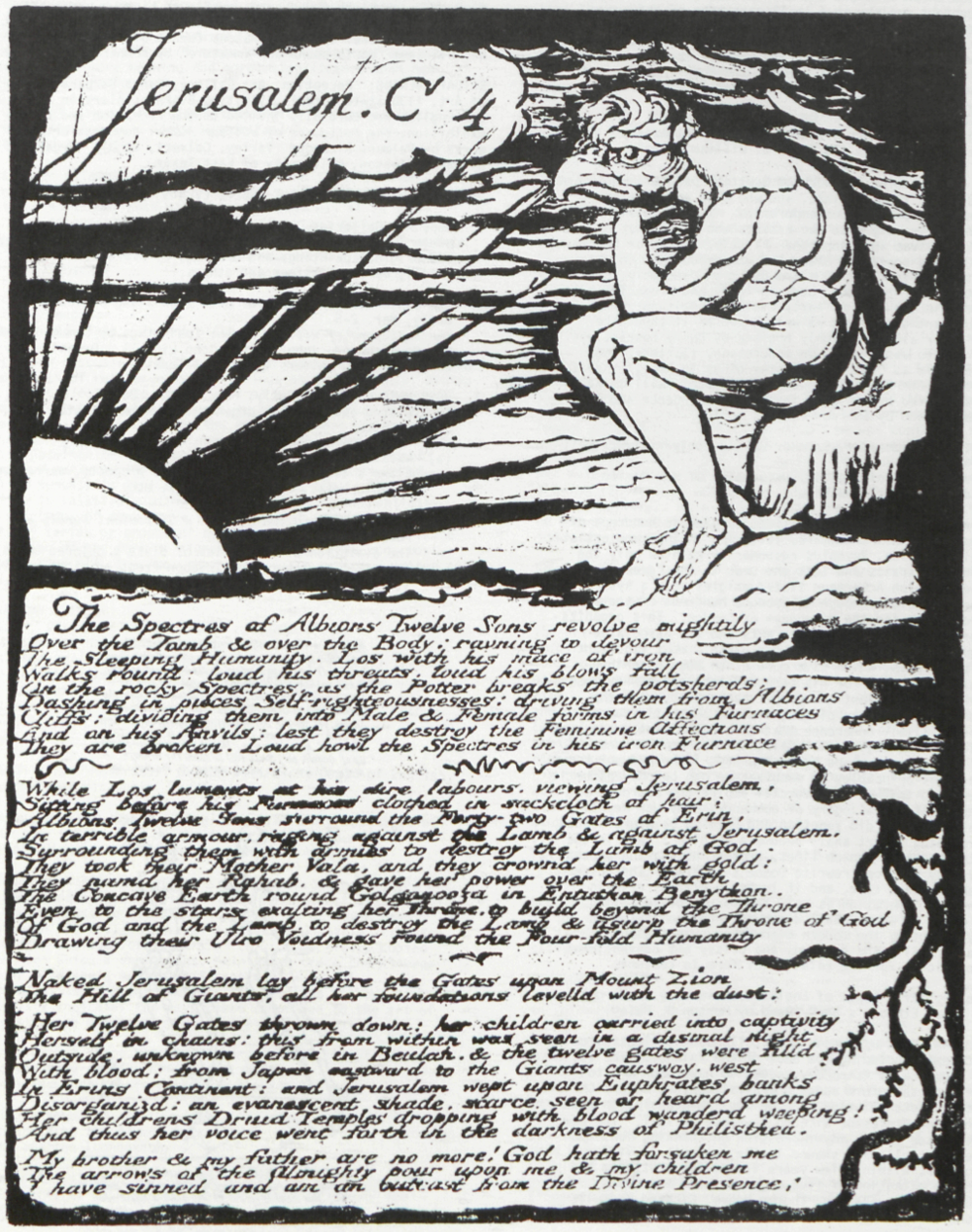 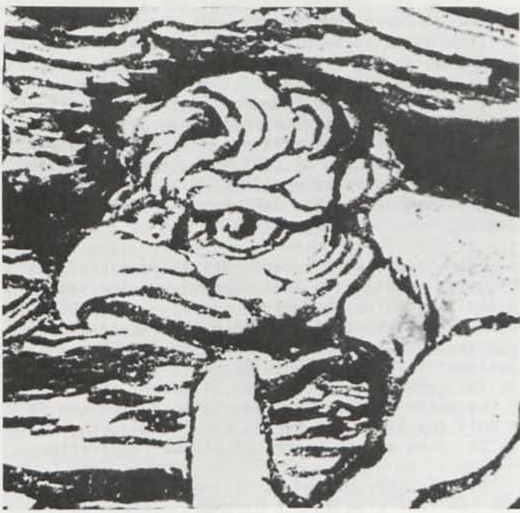 The Bird-Man of William Blake’s Jerusalem

The illuminations of William Blake’s Jerusalem are as complex as the actual text and as fascinating. One of the more puzzling of these illuminations is found on plate 78 (illus. 1), the title page of Chapter 4. It is a half-page illustration of a man with a bird’s head, seated upon a rock, his head resting upon the clenched fist of his left hand. The text of the page is written upon the murky waters which surround him, a quarter-sun appears upon his left, and dark clouds billow in an arch above his head.

This odd figure has already been identified as representing Los, Blake’s Time-Spirit “in a mood of conflicting emotions.”1↤ 1 Joseph Wicksteed, William Blake’s Jerusalem (London: The Trianon Press, n.d.), p. 226. Mr. Wicksteed’s further identification of the figure, however, I feel is incorrect. The bird’s head shown is not that of a cock. This is made obvious through a comparison with the bird’s head in Blake’s illustration of Comus with the Lady Spellbound, which does show a cock’s head. John Beer, in Blake’s Visionary Universe (New York: Barnes and Noble, Inc., 1969) also identifies the Bird-Man as an “Eagleheaded guardian visionary,” pl. 43. This interpretation is probably correct, as far as it goes. However, there is more meaning in this Bird-Man image (illus. 2), unique among Blake’s illuminations, than an identification as Los can provide. Blake has incorporated several visual allusions within this image and, once recognized, they add dimension to his character Los.

The motif of a figure resting his head on his hand is part of a visual tradition traceable to ancient Egyptian sarcophagi reliefs.2↤ 2 Raymond Klibansky,[e] Erwin Panofsky and Fritz Saxl, Saturn and Melancholy (London: Thomas Nelson and Sons, Ltd., 1964), pp. 286-87; see also Erwin Panofsky, Albrecht Dürer, 2 v., (Princeton, N. J.: Princeton University, n.d.), v. I, p. 162. Connected with Egyptian mourners, it signifies grief. This gesture was also used to show sleep, fatigue and creative thought. That Blake was familiar with this ancient device and used it in several of its meanings can be seen in his illuminations. In his watercolor, Queen Katherine’s Dream, he uses it to show dream-filled sleep. In My Son! My Son!, from the Gates of Paradise (pl. 8), he uses the pose to represent despair and grief. And in his illuminations for Poems by Mr. Gray (p. 82) Blake repeats the convention again, this time to imply creative thought. Which, if any of these meanings, apply to the figure in plate 78? A look at his artistic sources is helpful here.

As a boy, Blake bought engravings and drawings from several of London’s auction rooms.3↤ 3 G. E. Bentley, Jr., Blake Records (Oxford: The Clarendon Press, Press, 1969), pp. 421-22. Dürer, in particular, was one of Blake’s heroes and it is known that a copy of Durer’s Melancholia I (illus. 3) hung for a great part of Blake’s life on his workroom wall.4↤ 4 Bentley, p. 565, fn. 3. It is doubtful that the similarity between the poses of Dürer’s melancholy angel and Blake’s Bird-Man is merely coincidental. What is puzzling is why Blake chose to make such an obvious and singular allusion to Melancholia I in this illumination. The answer may lie in the Neoplatonic philosophy in which Dürer’s print is steeped and about which Blake may well have known. 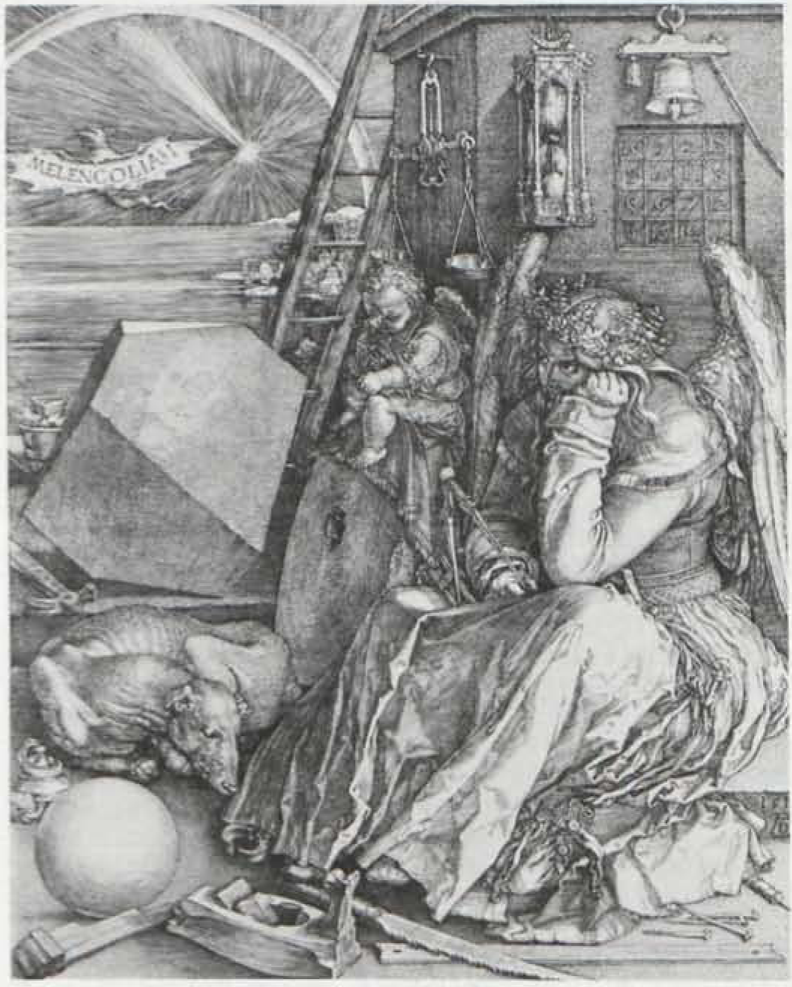 3 Albrecht Dürer, Melancholia I
begin page 50 | ↑ back to top

Of the major works of Dürer in 1514, Melancholia I is the most involved iconographically.5↤ 5 I have relied heavily upon Panofsky’s analysis here, Albrecht Dürer, v. I, pp. 156-71. It symbolizes one of the four humors, or temperaments, popular in the Middle Ages—specifically, the dreaded melancholy humor. The Florentine Neoplatonists, in particular Marsilio Ficino, gave the melancholic a much more favored position than previously assigned him.6↤ 6 See R. Klibansky,[e] et al., Saturn and Melancholy for a discussion of the evolution of melancholy in the 16th century’s Neoplatonic thought. By transposing the idea that all geniuses are melancholics into the statement that all melancholics are geniuses, this humor became associated with high thought. This kind of melancholic is the one that Dürer represents. His engraving is, in Neoplatonic terms, of a “melancholia artificialis,” or artist’s melancholy. For Durer, and possibly for Blake as well, Melancholia I was a visionary image of the melancholy artist he was himself.

Plate 78 therefore has an implicit connection with the melancholy artist. In Blake’s system Los is the “creative imagination,” the deepest Zoa and the center of each individual.7↤ 7 S. Foster Damon, A Blake Dictionary (Providence, R. I.: Brown University Press, 1965), p. 246. Durer’s angel, lapsed into a state of gloomy inaction, represents Theoretical Insight, for she thinks but cannot act—so Los broods in inactivity. Melancholia, representing architecture and carpentry, has about her elements which are of Los’ trade. They are both seated near water as murky as the black gall which afflicts melancholics and both have the characteristic “earthlike” complexion of melancholics.8↤ 8 Erwin Panofsky, Albrecht Dürer, vol. 1, p. 163. As Durer’s angel is the embodiment of the tragic unrest of human creation, Los—the creative imagination—is the origin of that restless creation, and his son Orc is the revolutionary spirit itself.

Another element in plate 78, traced to its artistic source, provides the next level of meaning in Blake’s image. That is the figure of a man with a bird’s head. Again this is a commonly used, ancient motif traceable to representations of the Egyptian sun god Horus, shown with the head of a hawk. As both Los and Horus are associated with the sun, Los probably being an anagram of “Sol,” there is a connection even here.9↤ 9 Damon, p. 246. Yet the head of Blake’s Bird-Man is not a hawk and his artistic source may well be not from his early work for the Society of Antiquaries, but from his knowledge of early medieval Christian motifs.

That Blake chose an eagle’s head for his Bird-Man can be seen through a comparison with the eagle-head of the griffin in his illumination to Dante, Beatrice Addressing Dante from the Car. Blake was familiar with the Christian tradition that associated the four evangelists with the four beasts of the Apocalypse (in Blake’s system, the Four Zoas). In this tradition St. John was represented by the eagle. Medieval illuminators chose to depict St. John in one of three ways: with an eagle, as an eagle, or as a man with an eagle’s head (illus. 4).10↤ 10 F. Edward Hulme, Symbolism in Christian Art (New York: Macmillan & Co., 1891), p. 132.

Aside from the fact that an eagle-man is St. John’s traditional symbol, he is also often shown, as in plate 78, alone on the island of Patmos writing the Book of Revelation. Thus Blake’s figure is not only a direct reference to the evangelist, but to the event of divine inspiration for which he was known. Again, it seems pertinent to ask why Blake chose this allusion.

According to Blake’s system, Los is “the ‘Prophet of Eternity,’ who reveals the basic truths . . . He directly inspires Blake himself . . . .”11↤ 11 Damon, p. 247. Thus St. John, who wrote the Apocalypse—a book exclusively meant to reveal future truths—proves an appropriate parallel figure. St. John’s visions, especially of the Last Judgment, were also a great inspiration in Blake’s writings. As Blake identified with Los, so too he must have identified with the great visionary evangelist. With Blake as the common link, Los and St. John became fused, in plate 78, into one image.

Traditionally, the eagle was the one bird who could soar on high and look directly at the sun.12↤ 12 Damon, p. 112. A symbol of genius, he was an appropriate symbol for St. John, who wrote of the highest mysteries of faith. As Blake said, “When thou seest an eagle, thou seest a portion of Genius; lift up thy head!”13↤ 13 Marriage of Heaven and Hell, 9:15. Thus the symbolism surrounding St. John, the sun and the eagle are linked. In plate 78, the sun is not only the link with Los as his “golden orb,” but with St. John as his source of Divine Inspiration.

Blake’s quarter-sun is divine because he shows it on the left side of his Bird-Man plate. In Renaissance tradition, the sun shown on the left, or sunlight from the left in a picture, was a northern sun.14↤ 14 Erwin Panofsky, Early Netherlandish Paintings: Its Origins and Character (Cambridge, Mass.: Harvard University Press, 1953), pp. 147-48; for a discussion of the symbolism of lighting conventions and their meanings in Renaissance art. Northern light, as an unnatural phenomenon, was considered divine—a well-known artistic convention even in Blake’s time. Los and the eagle, both in Blake’s northern quarternary, further identify the region as northern.15↤ 15 Damon, p. 246. Thus the sun is not only a symbol for Los, and of St. John’s inspiration, but an equation of the two. Blake, the visionary, saw his inspiration and that of St. John as originating in the same way—from imagination.

But do the motifs of St. John and Melancholia have a common linkage? The four evangelists were equated with the four humors in medieval literature.16↤ 16 Erwin Panofsky, Albrecht Dürer, included in his discussion of Durer’s Four Apostles, p. 235. Durer himself made this connection and, using age as the key, showed St. John—according to northern custom—as a young man and therefore the sanguine. But, as Panofsky implies, this does not necessarily reflect a fixed association. St. John was often represented as an old man with a white beard in the Eastern tradition and could have been also associated with the melancholic humor. Certainly some representations of St. John suggest just such an association.17↤ 17 A representation such as St. John sculpted by Jacobello e Pierpaolo Dalle Masegne[e] in the Basilica di S. Marco, which shows the apostle characteristically with his hand to his cheek, in a melancholic pose. The melancholic’s inclination for 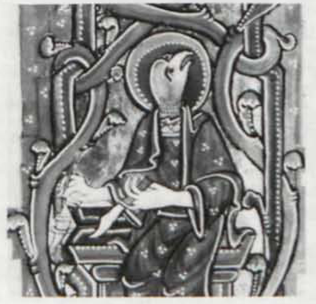 4 Man with an eagle’s head
begin page 51 | ↑ back to top solitude and study, plus the Neoplatonic equation with genius, make the connection a strong possibility. Perhaps Blake, knowing of the medieval associations, made his own link.

Thus the illumination of plate 78 is multilayered in its meaning. It is the figure Los, the creative imagination, surrounded by the sea of time and space, enveloped in Urizen’s “clouds of reason” which obscure the mind, accompanied by his sun symbol, in a mood of sullen contemplation. The figure is also the melancholy artist, surrounded by the waters of Saturn or waves of black gall, gazing at the inspirational sun, but unable to use his genius as he broods on the lonely shore. He is St. John as well, but without (or before) inspiration, exiled to Patmos, lethargically looking upon God’s sun with his eagle eyes, unable to act. Together, plate 78 represents all of these elements in one image, as they were in Blake’s mind—not to be differentiated, but ultimately perceived as one unit infinitely meaningful.