A Possible Source for a Blake Sketch and Drawing 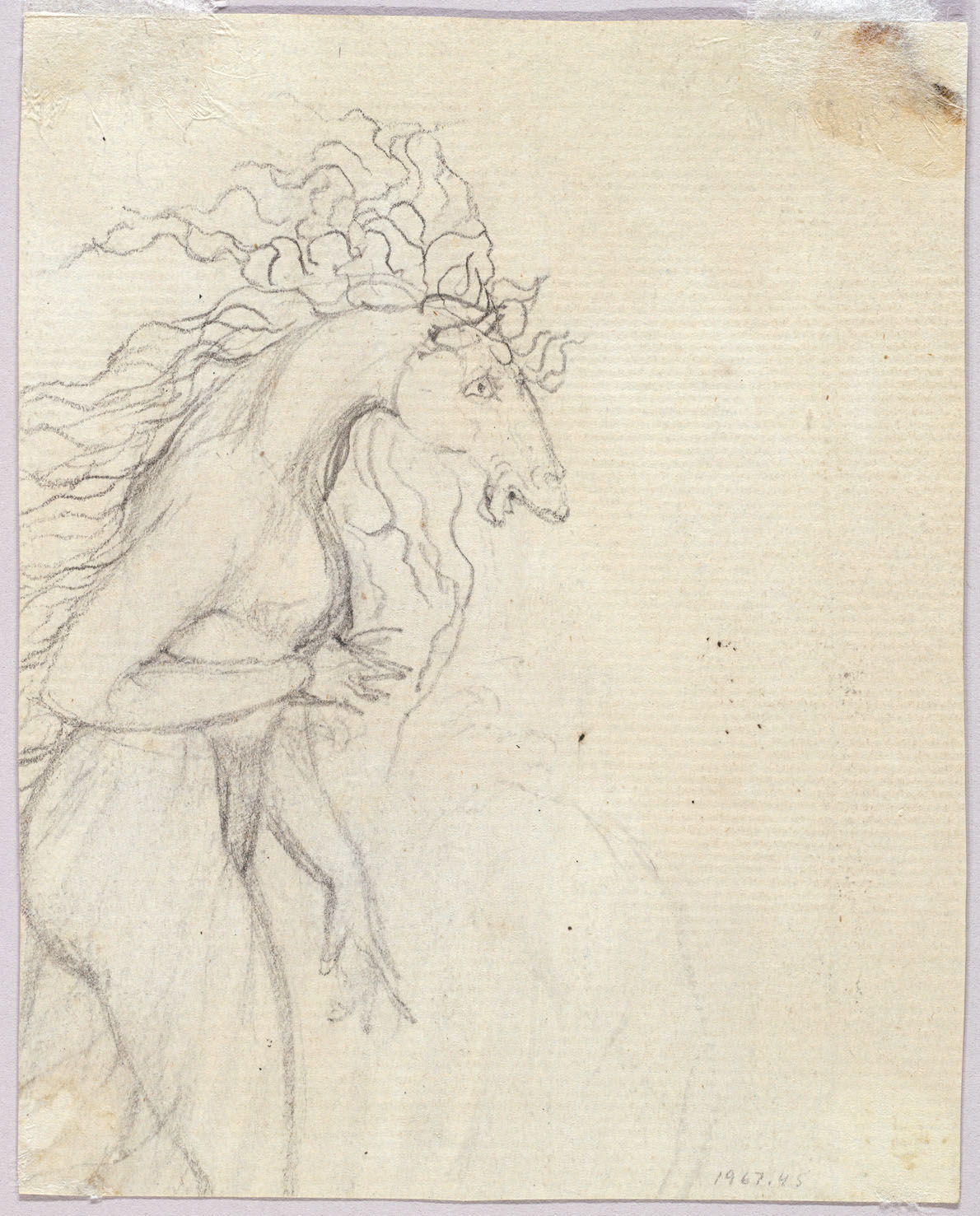 1 Blake, “Female figure with head of a horse”

In “Some Blake Puzzles—Old and New” (Blake Studies, 3 [Spring 1971], pp. 107-28), Michael J. Tolley told how his efforts resulted in the finding of some hidden Blake sketches in the British Museum. Among them was a pencil sketch of a nude figure with a dog-like head catalogued in the British Museum as 1874-12-12-119 verso. (See illus. 2, which is a reworking of the sketch for a cover of Blake Studies.) In the article Tolley terms the sketch “singularly unpurposive” and states that “this figure may be confidently identified as Anubis, in view of its probable relation to the Fuseli design engraved by 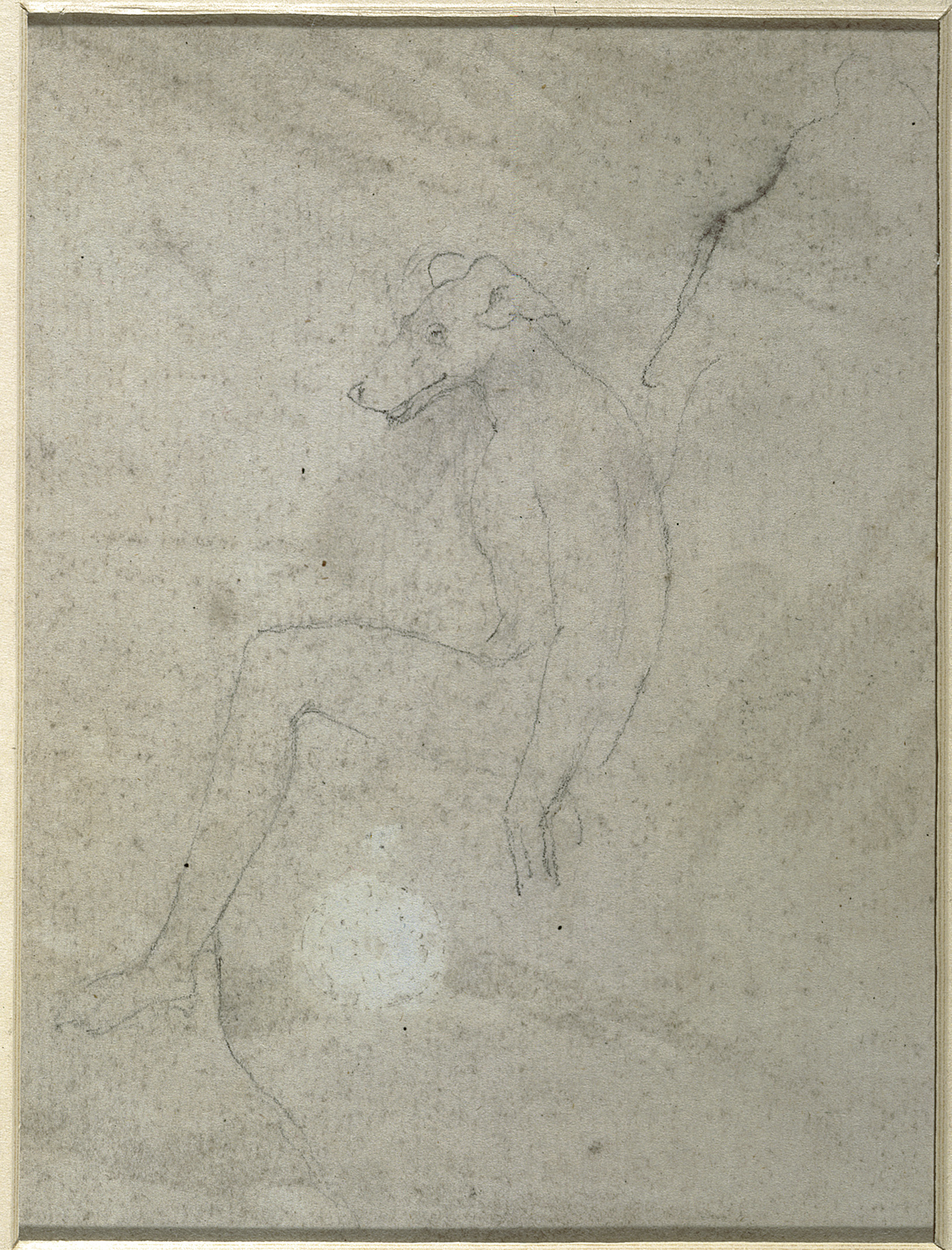 2 Blake, “Anubis”
Blake for Darwin’s Botanic Garden”[e] (pp. 107-08). (See illus. 4.) Tolley then goes on to attempt to fix the date of the sketch based on his identification of the figure as Anubis.

I would like to suggest that the two sketches may indeed be related, not in that they might belong to “the conjectured series of animal-headed figures” to which John Grant refers, but rather that both may have a common source, plate XIII of Jacob Bryant’s A New System, or, an Analysis of Ancient Mythology, 3 vols. (London, 1774-76).

Plate XIII (illus. 3) depicts four figures: Juno, Hermes, Hippa Triceps, and Hippa Phigalensium. What I would like to suggest is that the Hermes of this plate may be the source for the sketch of the dog-headed figure whom Tolley has identified as Anubis. Comparing both Blake’s engraving for the Botanic Garden and the engraving of Hermes for Bryant’s A New System with Blake’s sketch of the figure with a dog’s head, we see that perhaps the most important consideration is the fact that the engraving of Anubis for Darwin’s Botanic Garden shows only the back of the head, while the engraving of Hermes for A New System is a facial profile just as in the British Museum sketch. (Granted, in the Hermes engraving the head is a right profile and in the British Museum sketch it is a left one; nonetheless, 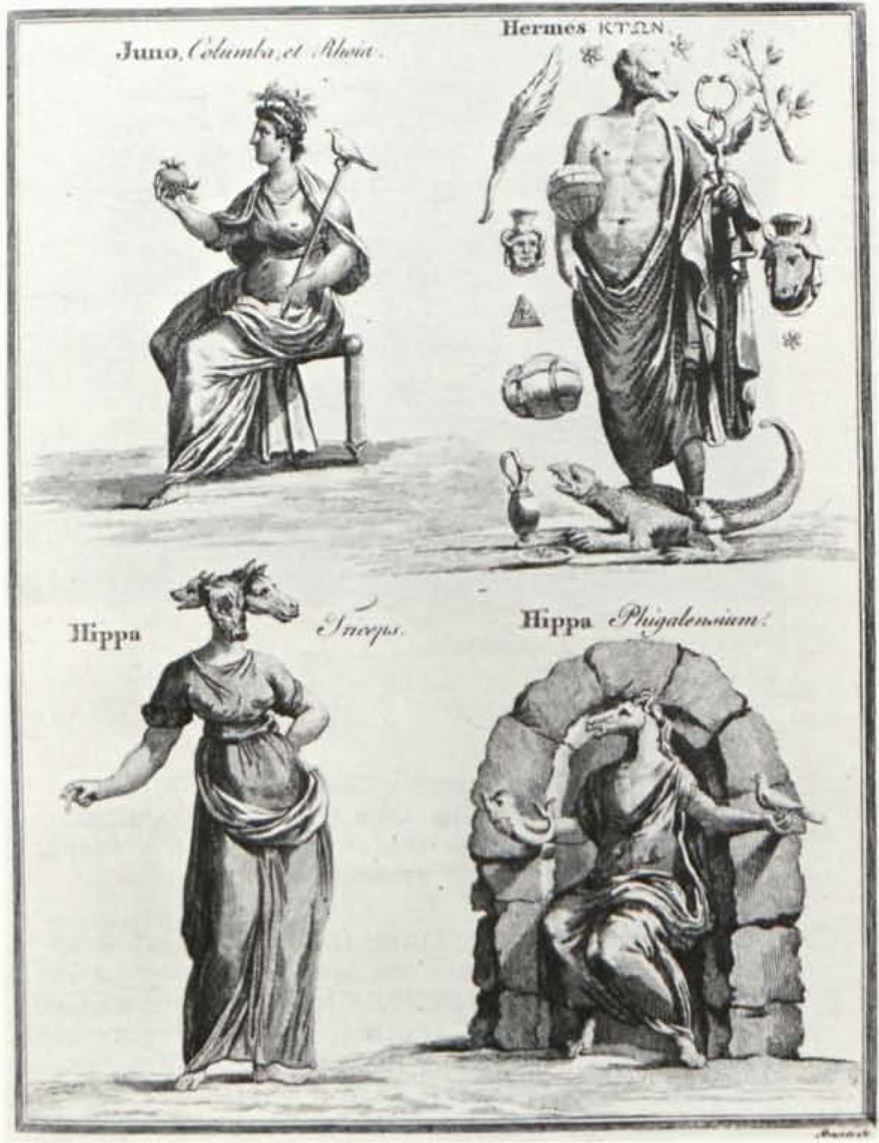 3 Plate XIII, Bryant’s New System
the dog-like tapered snout and overall shape of the head in both profiles are remarkably similar.)

Directly beneath[e] the Hermes on plate XIII is a female with a horse’s head, Hippa Phigalensium, the Horse of Poseidon, whom Bryant identifies as having sprung from Neptune after a dispute with Minerva. This engraved figure, Hippa Phigalensium, may have been the source for Blake’s pencil drawing now in the Fogg Art Museum, “Female Figure with a Horse’s Head” (illus. 1).

As with all of his sources, both verbal and pictorial, Blake transformed his material. If Blake’s pencil sketch of the nude man with a dog’s head is meant to be Hermes, then Blake’s sketch becomes a singularly wry version of a fertility god whose symbol was often a phallus. In Blake’s sketch of Hermes, the lines of the body and the figure’s posture convey lassitude and perhaps even immobility; the figure appears exhausted with its dangling arm and resting feet. Its potential as a fertilizer of the land has been spent long ago. If this figure is Hermes (as appears likely), it is a fertility god metamorphosed by Blake’s graphic irony.

Blake may have intended a similar critique of Hippa Phigalensium in his pencil drawing, “Female Figure with a Horse’s Head.” In the engraving for A New System, Hippa holds a dove, a symbol of peace, and a dolphin, a symbol of hope; yet Blake would have associated peace and hope with the Elect, not the truly regenerated. In Blake’s pencil drawing, the horse has been sensualized by the use of line in general and the emphasis on the breast and buttocks. The figure’s expression seems to be one of agitated fear; certainly it is in some kind of excited state. Blake’s presentation of Hippa in his pencil drawing is a far cry from the stoical-looking figure portrayed in plate XIII of A New System, whose solidity is emphasized by the stone portal which forms its background in the engraving. In drawing Hippa as he did in “Female Figure with a Horse’s Head,” Blake executes an ironic deflation similar to the one he subjected Hermes to in his pencil sketch of him now in the British Museum (illus. 2). In both this sketch and in the drawing of Hippa, Blake has created wry yet pointed criticism aimed at these pagan deities, and, by implication, at the classical culture from which they sprang.

It is possible that Blake could have engraved part of plate XIII, since he was apprenticed to 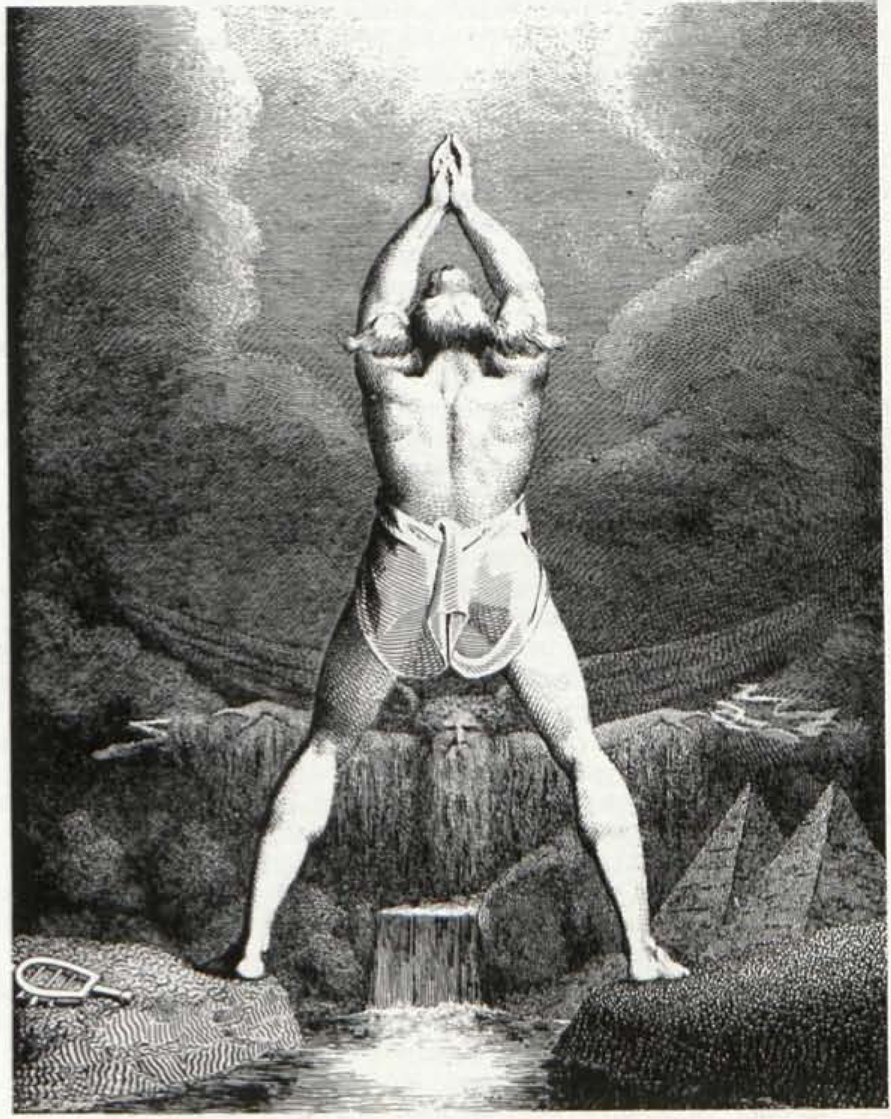 4 “Fertilization of Egypt,” Blake after Fuseli
James Basire, the engraver whose signature appears on the plate. There were 31 plates in the three volumes of the first edition of Jacob Bryant’s A New System; all but three have the signature of Basire. Bentley and Nurmi in A Blake Bibliography (Minneapolis, 1964) state that “with such a number of plates [in A New System] by Basire, it is virtually certain that Blake engraved at least part of a few” (p. 103).1↤ 1 Roger R. Easson and Robert N. Essick in William Blake Book Illustrator, Vol. I (Normal, Ill.: American Blake Foundation, 1972) include in their volume “only those prints signed by Blake as designer and engraver or ascribed to him in the book in which his work appears” (p. x). Because of their cautious approach in attributing work to Blake, they exclude plates from Bryant’s A New System from the first volume of their projected three-volume set. They do mention that the “Vignette of the Deluge” at the end of Vol. III of A New System has been attributed to Blake, but they remain unconvinced of the attribution because of the lack of solid evidence. Blake certainly could have seen plate XIII. (He was apprenticed to Basire from 1770 to 1783.) If Blake did engrave part of this plate (and this is only a conjecture), in the sketch of Hermes and the drawing of Hippa we may have embryonic examples of Blake’s protest against the staid, traditional art of his time.