The exhibition of drawings by James Jefferys held at the Victoria and Albert Museum from February to May 1976, supplemented by an article by the two organizers, Timothy Clifford and Susan Legouix, in the Burlington Magazine for March 1976, has added another name to the circle of artists whose work lies behind the proto-Romantic Neo-Classicism of much of Blake’s work.1↤ 1 Exhibition The Rediscovery of an Artist: The Drawings of James Jefferys (1751-84), Victoria and Albert Museum, February-May 1976, with sixteen-page illustrated catalogue, and article “James Jefferys, Historical Draughtsman (1751-84)” in Burlington Magazine, 118 (1976), 148-57. His drawings, the main body of which is in the Maidstone Museum with other examples at the Royal Academy, British Museum, Huntington Library and two or three other collections, include imitations of John Hamilton Mortimer (1741-1779), works that have at one time been attributed to James Barry (1741-1806), and reflections of other artists such as Gavin Hamilton (1723-1798), George Romney (1734-1802), and Henry Fuseli (1741-1825). He was in fact, within this general overall style, a thorough-going eclectic. Certain personal mannerisms will no doubt lead to further attributions, but his early death seems to 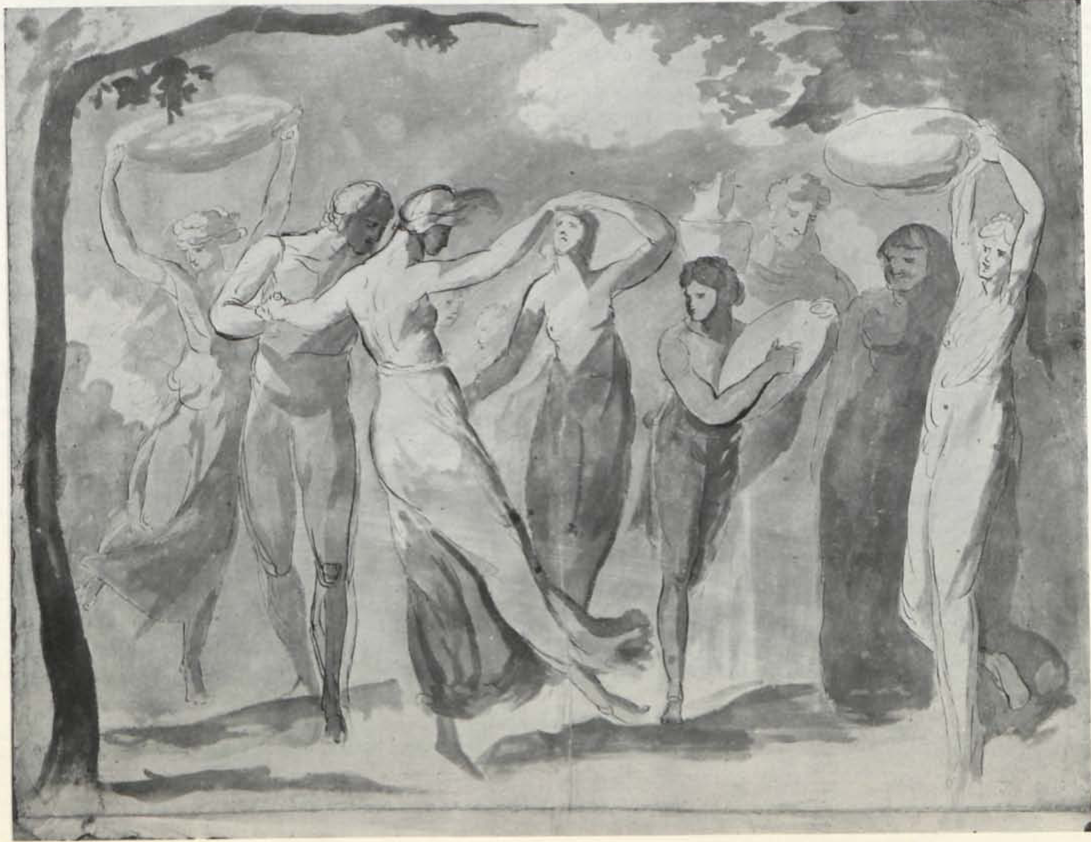 Apart from the inferences to be made from his drawings (the closeness of some of them to Mortimer suggests perhaps a master-pupil relationship) little is known of his life. Study at the Academy Schools and the exhibiting of a number of works at the Society of Artists led to the most significant feature of his career, a stay in Rome on a traveling scholarship from 1775 to some unknown date, probably 1779 or even later. Nearly all of Jefferys’ dateable drawings were done during this visit. Mentioned by the landscape painter Thomas Jones (1742-1803) as one of the English colony of artists there, he would have known most if not all of this group, among them significantly Fuseli (in Rome 1770-1778), Romney (in Rome 1773-1775), Thomas Banks (1735-1805; in Rome 1772-1780) and John Brown (1752-1787; in Rome 1771-1781).

Of Blake’s works it is particularly the early drawings in pen and wash that are closest to this group of artists; the technique and general style were common property. Central to the attribution of Blake’s drawings in this idiom are the two sketches on one sheet at Windsor2↤ 2 Repro. Geoffrey Keynes, William Blake’s Illustrations to the Bible, 1957, nos. 32a and 32b. for the Joseph series exhibited at the Royal Academy in 1785. In addition, one of the group of similar but slightly cruder drawings for the composition known as “The Good Farmer” is on the reverse of a drawing for “St. John the Evangelist before a Vision of Christ,” engraved by Blake for The Royal Universal Family Bible in 1782.3↤ 3 British Museum 1874-12-12-143; see Martin Butlin, William Blake: A Complete Catalogue of the Works in the Tate Gallery, 2nd ed., 1971, p. 26 under no. 3. Round these fixed points can be gathered, with varying degrees of certainty, a fairly large group of other drawings. At first sight one Jefferys drawings in the exhibition at the Victori and Albert Museum, “A Rustick Dance” (illus. 1), caused this writer at least momentary doubts. The drawing is particularly close to such works as the Tate Gallery’s “Allegory of the Bible”4↤ 4 See Butlin, Catalogue, p. 26 no. 2, repro. (this is in fact colored but is otherwise similar in style to the rest of the group) both in its technique and in the rather flaccid, elongated figures. These doubts are now stilled but suggest that the fringes of this group of attributions to Blake should be critically reexamined with a thoroughness that is, alas, impossible in time for my forthcoming catalogue, already with the publisher if not as yet at the printers.

A much grander and more personal example of Jefferys’ draughtmanship is “Fallen Warrier lying against a Dead Horse” (illus. 2). This shows a more general kinship with Blake’s series of depictions of the horrors of war and other disasters, which began with the small watercolor of c. 1779-1780 of “Pestilence, probably the Great Plague of London,”5↤ 5 See Martin Butlin, “Five Blakes from a 19th-Century Scottish Collection” in Blake Newsletter 25 (Summer 1973), pp. 4-8, illus. 1. included two works exhibited at the Royal Academy in 1784, “War unchained by an Angel, Fire, Pestilence, 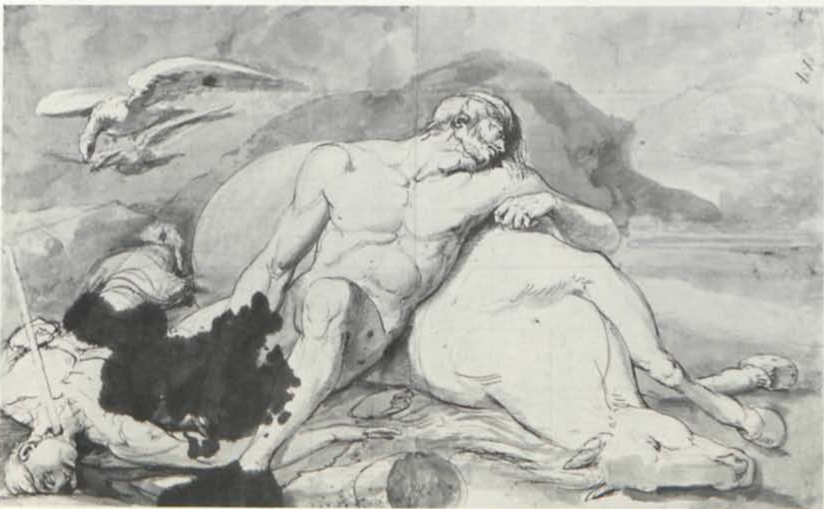 2 James Jefferys, “Fallen Warrior lying against a Dead Horse.”   Pen and grey wash over pencil 19-¾ × 30-¼ (50.1 × 76.8) Maidstone Museum and Art Gallery.
and Famine Following” and “A Breach in a City, the Morning after a Battle,” and culminated in four watercolors of 1805, “Pestilence,” “Fire,” “War” and “Famine.” Moreover, “A Breach in a City,” at least as it is known in the surviving versions,6↤ 6 Those in the Carnegie Institute, Pittsburgh, probably of the early 1790s, repro. David V. Erdman and John E. Grant, eds., Blake’s visionary Forms Dramatic, 1970, pl. 23; and the University of North Carolina, of the later 1790s, repro. Kerrison Preston, ed., The Blake Collection of W. Graham Robertson, 1952, pl. 56. even includes a hovering eagle close to those in the Jefferys drawing.

The rediscovery of Jefferys has already led to further discoveries concerning both his relationship to Mortimer and the possible later development of his style; these have yet to be published. A possible effect on some Blake attributions has already been suggested. But most important is the addition of a new personality to the background of Blake’s artistic development, and the strengthening of the importance of artistic life in Rome in the 1770s for an artist who was fated never to leave his native England.