When Karen McHaney and I began working on maps for the Norton Critical Edition of Blake in February 1976, neither of us knew what we were getting into. Karen, a professional cartographer who happens to be a close friend of mine, expected to do precision work; I had in mind a visionary map making use of the northern and southern “gates” in Milton 28 [K 26] and the miniature skylines of York and London in Jerusalem 57, perhaps outlining Albion’s sleeping body against the cliffs of Dover. I thought we could distort the scale along the lines of “A New Yorker’s View of the U.S.A.,” which shows the Hudson River about where the Mississippi should be and the rest of the country a shrunken blur, except for San Francisco, Los Angeles, and Miami Beach. The only example I had on hand to give Karen was a non-scale tourist map of London which contains blow-ups of the main attractions. It turned out, however, that Karen’s insistence on true scale forced me to a better understanding of the physical spaces in Blake’s visionary universe which I believe will make certain geographical relationships clearer to others than can be determined from previously existing maps.

We worked first on the Holy Land and Britain, thinking it would be a cinch to put together the maps in the backs of our Bibles with Stevenson’s map in the Longman-Norton Blake and to check both against Blake’s biblical allusions. But Bible maps show political boundaries at particular points in history, and the map in Stevenson’s edition (p. 575, drawn by K. C. Jordan) doesn’t make a typographical distinction between tribal names and other territories such as Bashan and Moab; also the tribal territory of Simeon has been omitted. We combined place-names from all historical periods to represent Blake’s overlaying a Christian outlook upon this ancient land. When the authorities were uncertain or in conflict about the location of a city, we placed it where it seemed best to fit Blake’s references. To keep the map uncluttered, we left out all places important in the Bible but unimportant in Blake. We followed the same practice for the map of Britain, adding to Damon’s Dictionary map of the cathedral cities the locations of the 52 counties (a meaningless catalogue of names to American students) and the major rivers and mountains mentioned by Blake, as well as Felpham and the landmarks in the southern “gate,” Lizard Point and Land’s End. We settled for an arrow pointing to Caithness along the northern “gate”; if we had extended the area to the north of Scotland we would have had no space for the names of the counties, after reduction to fit the map on the Norton page. Our effort to draw something resembling both the coastline of Britain and the Giant Form of Albion came to nothing; perhaps some one person knowledgeable in Blake and skilled in cartography, calligraphy, and drawing could do better. We left Albion and Jerusalem to the viewer’s imagination and suggested the visionary dimensions of Britain and Palestine by Stonehenge-like trilithon markers for places associated with human sacrifice, including Golgotha and Tyburn.

Making the London map was the hardest, yet most rewarding, of our jobs. Our chief innovation has been to represent all places important to Blake, in both his life and his work, during all periods of his career. Thus we could not base our map on any single historical map. Stevenson’s “Map of London ca. 1810” requires an explanatory note: “The site of Regent St. is approximately that of Swallow St. on this map” (p. 621), and in any case it takes in so much territory that it had to be reduced beyond the point of legibility to fit on the page. Nor could we depend upon the portion of Cary’s “Plan of London and Westminster” (1820) reproduced in Damon’s Dictionary—helpful though it was to us—because the Blake locations don’t stand out among all the other features; also it doesn’t extend far enough east into The City to show St. Paul’s and London Stone or far enough north to show Regent’s Park. Until the last stages of our project, I somehow forgot about Bentley’s reproduction of portions of Horwood’s “Plan of the Cities of London and Westminster” (1792-99), which points out all Blake’s residences; without Bentley’s guidance I would have misplaced Fountain Court near the Temple, on the basis of an erroneous guidebook description. Because of the combined effects of photographic blurring and reduction, the name of Fountain Court in Bentley’s reproduction is illegible; this street is not shown at all in Damon’s clear reproduction of Cary’s Plan (it should be about where the “46” is, west of Waterloo Bridge).

Because we were not confined to a London map of any one year, we were able to represent “eternally building eternally falling” London: John Nash’s renovations (1812-20) and Waterloo Bridge (originally planned as Strand Bridge). Here I began to understand what the Golden Builders were doing. We had already found Willan’s Farm and the Jew’s-Harp House on early maps of London before Blake’s time; in begin page 118 | ↑ back to top 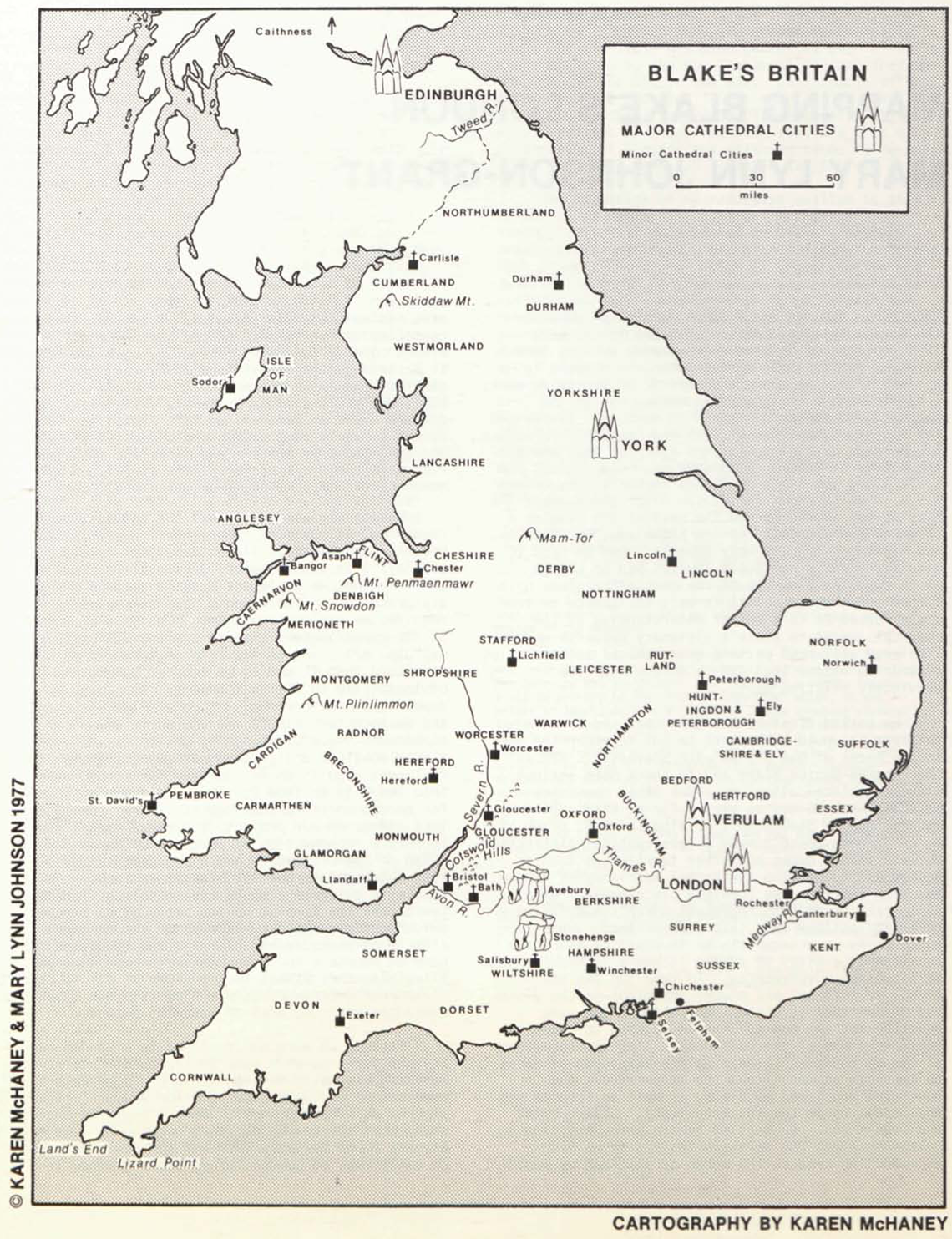 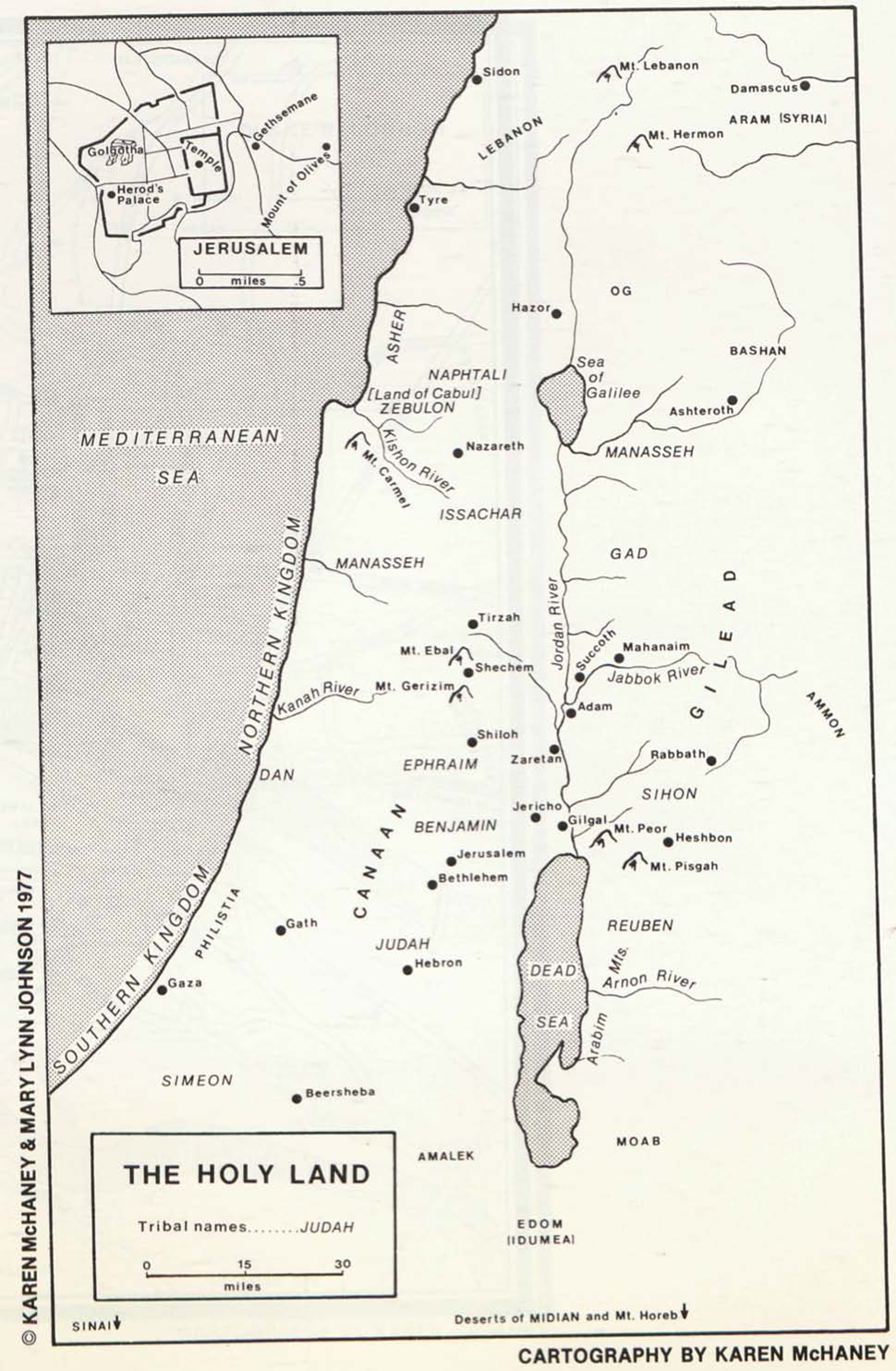 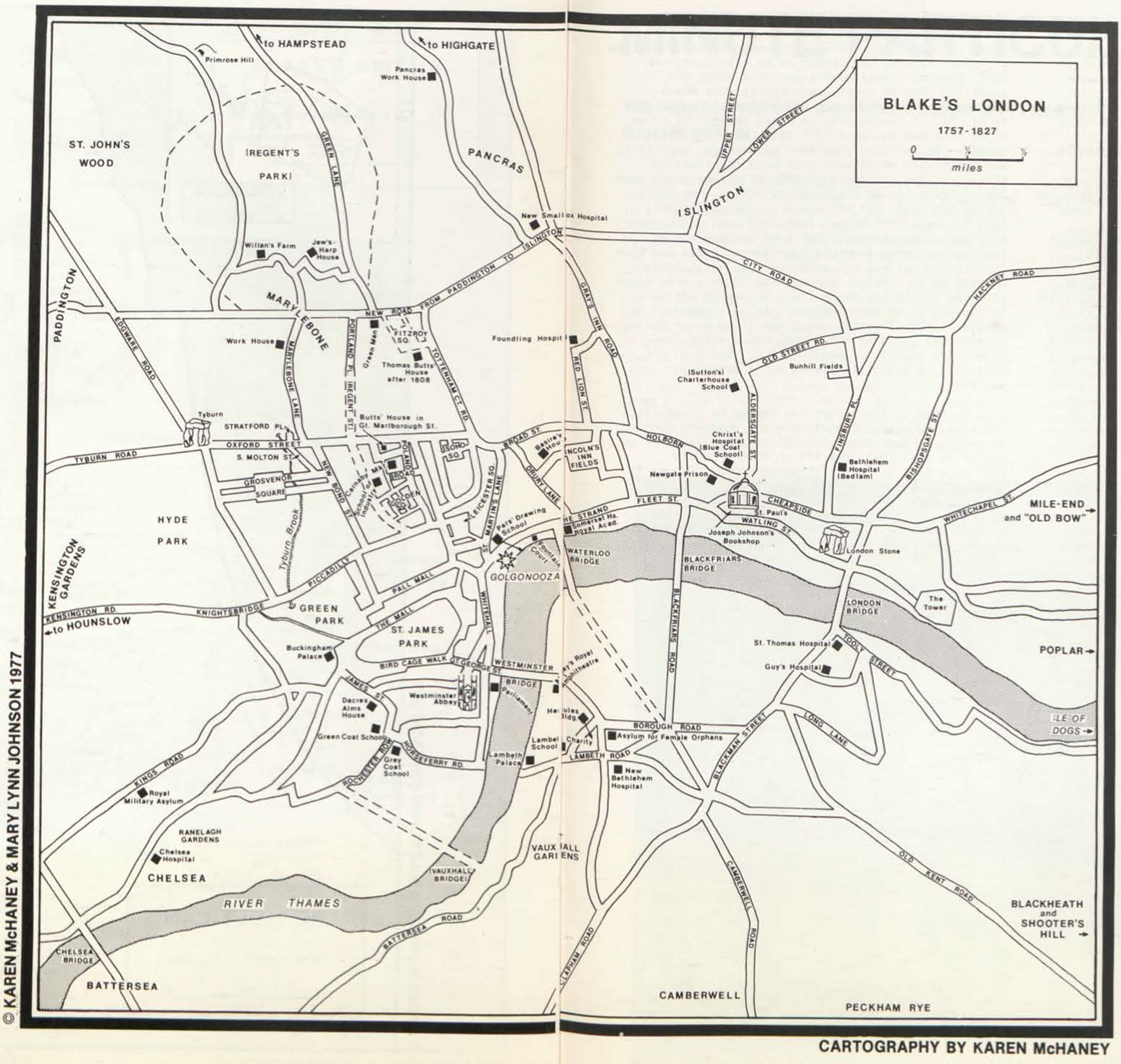 begin page 122 | ↑ back to top aligning these with post-1820 maps showing the results of Nash’s project, I was finally able to grasp the point that the farm and the tavern were actually within the royal preserve which Nash redesigned as Regent’s Park—not further out in the country as I had imagined them. Even after going through piles of reference books, however, we were never entirely sure of the exact course of Tyburn Brook. It rises at Shepherd’s Well in Hampstead and since the sixteenth century has flowed in a conduit surfacing at Stratford Place and Oxford Street; it formerly separated into three swampy branches emptying into the Thames near Westminster Abbey, but it was diverted into ornamental streams in Green Park and St. James Park. It was originally the boundary between Kensington and Westminster. Blake seems to place it within Kensington Gardens (Milton 6:9); Hogarth pictures it just at Tyburn Gallows in The Idle ’Prentice Executed at Tyburn (1747). According to Damon’s Dictionary, “It crossed Oxford Street a little to the east of the present Marble Arch [i.e., at Tyburn], and flowed through St. James’ Park, then plunged underground at the intersection of Stratford Place and South Molton Street”; this would mean that it flowed south and then back north, crossing Oxford Street twice. It was apparently so scarcely a river and so nearly a sewer that maps of Blake’s time do not record it. Karen and I followed Stevenson in representing only the surface section which wound from Stratford Place past Grosvenor Square and entered Green Park at Halfmoon Street (the latter street not named on our map). I would like to know its full course and what it looked like in Blake’s time.

A few other features are noteworthy: Blake’s patron Thomas Butts, usually thought of as residing in Fitzroy Square, did not move there until 1808; we have marked also his house in Great Marlborough Street, to which Blake addressed his correspondence. By leaving out streets and landmarks inessential to Blake’s London, we were able to show places associated with his training and career as an artist-engraver: Pars’ Drawing School, James Basire’s house and engraving shop in Great Queen Street, the Royal Academy in Somerset House, Joseph Johnson’s bookshop in St. Paul’s Churchyard; if I had thought of it we might have put in Langford’s sale-rooms in Covent Garden. We included prominent orphanages, hospitals, and workhouses which must have been important in Blake’s vision of London whether or not he names them. One of these is the Charterhouse School, the institution for “aged men and youth” in Obtuse Angle’s song “To be or not to be” from An Island in the Moon; this and other charity schools on our map can be imagined as those from which children in red and blue (Christ’s Hospital) and green (Green Coat School) marched to St. Paul’s, and perhaps Dacre’s Alms House is where little Tom Dacre lived before he was sold to the master chimney sweeper. An idle query of no scholarly significance: as there is no North Molton Street, was South Molton Street named after the Devonshire village of South Molton? Books on the origin of London street-names don’t answer the question.

Working on these maps has helped me visualize the building of Golgonooza amid the soot and clamor of London. Place-names associated with Blake are easier to spot than they are on other readily available maps of late eighteenth-century and early nineteenth-century London. I hope all three maps will be useful to readers of the Blake Newsletter, as well as to the students who will read William Blake: Selected Poems and Designs, a Norton Critical Edition edited by John E. Grant and Mary Lynn Johnson, scheduled for publication in the winter of 1978.