With this issue the Blake Newsletter celebrates its tenth anniversary. The first issue was edited and published by Morton Paley from the University of California at Berkeley in the summer of 1967. In 1970 Paley divided the editorial responsibilities with Morris Eaves, and the production office of the Newsletter was moved to the University of New Mexico in Albuquerque. With the sponsorship of the English Department there, the Newsletter was able to change its format: first from multilith to photo-offset, which allowed us to reproduce pictures, and then from photo-offset in single columns to a double-column format that allowed the pictures to be integrated more flexibly with the text. We published our first color illustration in 1974-75, and another last year. Bibliographical work gradually became a sort of sub-specialty, beginning with the supplement to the Bentley-Nurmi Blake Bibliography that appeared in one of the very early issues, which was followed by Robert Essick’s handlist of reproductions, Bentley’s checklist of the Blake 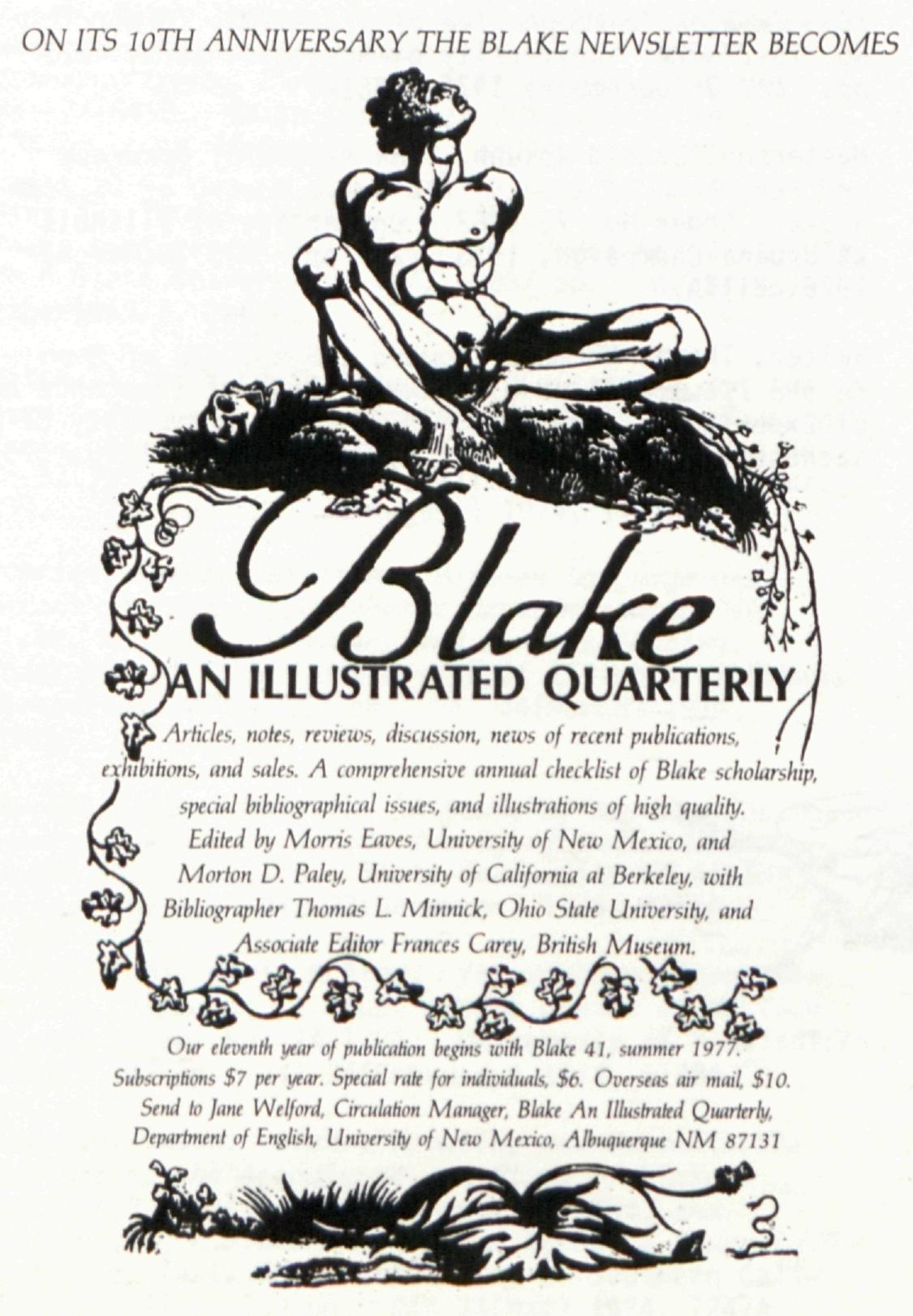 collection at the British Museum, Ruth Lehrer’s checklist of the Rosenwald collections, Everett Frost’s checklist of Blake slides, and a host of others. Finally, in 1976 Thomas Minnick was added to the editorial staff as Bibliographer, to handle all our bibliographical projects, including the annual checklist of Blake scholarship, which was joined a couple of years ago by Robert Essick’s annual checklist of sales, “Blake in the Market-place.” We published our first special thematic issue, on Blake among Victorians, in 1974, and another, on The Textbook Blake, with a long bibliographical essay with checklist by Mary Lynn Johnson, in 1976. We contributed resources for discussion to the annual MLA Blake seminar for the first time in 1975, with a supplemental booklet by W. J. T. Mitchell on Blake’s pictures of the Last Judgment, and again in 1976, with an essay by Irene Tayler on Blake’s Laocoön. In 1975 we went outside the confines of the journal itself to publish an inexpensive classroom facsimile of America, a feat we hope to duplicate with other works in illuminated printing before too long.

Now, in 1977, with issue number 41, the first in our eleventh volume, we are changing our name to bring it in line with what we think is the truth—dropping “Newsletter” from the title to become simply Blake An Illustrated Quarterly, and reminding ourselves of our origins by making our “News” section the “Newsletter.” We have already grown, we believe, to be the quarterly that our new name asserts we are, and therefore we plan no special changes in format or extent, except that we shall now welcome from contributors some of the longer and more “interpretive” articles that we have never solicited in the past.

The change in the price of a subscription that also goes into effect with this volume is an anniversary present that we did not want to give to our subscribers. We want to assure you that the raise in price has nothing to do with the change in our name—only with the steady change in the costs of goods and services. If history consoles, a subscription in 1967 cost $2; in 1970, $3 and $4; in 1971, $3 and $5; and by early 1972, $4 and $5—the present rate, which has held steady for more than half a decade (to put it as strongly as possible). The new rate is $6 for individuals, $7 for institutions.