The 1788 Publication Date of Lavater’s Aphorisms on Man

William Blake’s annotated copy of the first English edition of J. C. Lavater’s Aphorisms on Man (tr. H. Fuseli, pub. J. Johnson)1↤ 1 I wish to express my thanks to the authorities of the Huntington Library, San Marino, California, for supplying me with a microfilm of Blake’s copy of Lavater’s Aphorisms (shelf-mark RB 57431). is usually dated 1788 on the apparently firm evidence of the title page dated 1788 and the unsigned “Advertisement” (pp. v-vi) dated “May, 1788.”2↤ 2 On the conventional date of the Lavater marginalia, see G. E. Bentley, Jr. and Martin K. Nurmi, A Blake Bibliography (Minneapolis: Univ. of Minnesota Press, 1964), pp. 36, 37, 137, 207-08. Hereafter cited as Bentley & Nurmi. This date may be especially important for the chronology of Blake’s earliest illuminated books, if, as S. Foster Damon first observed, All Religions are One and the two series of There is No Natural Religion are formally and materially indebted to Lavater’s Aphorisms. 3↤ 3 S. Foster Damon, William Blake: His Philosophy and Symbols (Boston: Houghton Mifflin, 1924), p. 37n. Admitting the real differences between Lavater’s Aphorisms and Blake’s principles in the Natural Religion tractates, one may nevertheless agree with Damon that Lavater’s first two aphorisms (which Blake in his note called “true Christian philosophy far above all abstraction”) bear a striking resemblance to All Religions are One, principles 1, 2, and 7. Although none of the extant copies of the Natural Religion tractates can be shown to have been printed as early as 1788, the scholarly consensus is that the plates were probably etched at about that time. Briefly, the evidence for this conjecture is that the size and technical imperfections in the lettering and designs suggest that Blake was experimenting with a new medium, and that the colophon to the Ghost of Abel (“1822: W Blake’s Original Stereotype[e] was 1788”), a work addressed to “Lord Byron in the wilderness” probably refers to All Religions are One, the frontispiece of which is inscribed “The Voice of One Crying in the Wilderness.” If Lavater’s Aphorisms is considered to be a positive influence upon the Natural Religion tractates, then, as Martin K. Nurmi plausibly argues in William Blake (London: Hutchinson Univ. Library, 1975), pp. 52-54, Bacon’s maxims may be considered a negative influence. In light of this, it is unsettling to find that David Erdman, in two very influential studies of Blake,4↤ 4 Blake: Prophet Against Empire, 2nd ed., rev. (Princeton, N.J.: Princeton Univ. Press, 1969), p. 139n. and The Poetry and Prose of William Blake, with a commentary by Harold Bloom, 4th printing, rev. (Garden City, N.Y.: Doubleday, 1970), pp. 572, 799. re-dates Aphorisms 1789—and thereby pushes the terminus a quo of Blake’s annotations forward by at least six months—on the authority of the following statement in John Knowles’ Life and Writings of Henry Fuseli (1831): ↤ 5 I, 159. Those who date Aphorisms 1789 include: E. D. Hirsch, Jr., Innocence and Experience: An Introduction to Blake (New Haven and London: Yale Univ. Press, 1964), p. 326; Marcia Allentuck, “Fuseli and Lavater: Physiognomical Theory and the Enlightenment,”[e] in Studies on Voltaire and the Eighteenth Century, ed. Theodore Besterman, 55 (Geneva: Institut et Musée Voltaire, 1967), 97; Anne Kostelanetz Mellor, Blake’s Human Form Divine (Berkeley: Univ. of California Press, 1974), p. 4n; Morton D. Paley, Energy and the Imagination: A Study of the Development of Blake’s Thought (Oxford: Clarendon Press, 1970), p. 10n. Paley is alone in identifying and trying to resolve the discrepancy between the 1789 date of Aphorisms and the traditional chronology of Blake’s other works: “As Blake, having engraved the frontispiece for Johnson, obtained an unbound copy, he probably read the book before its publication in 1789.”

In the beginning of the year (1789), Fuseli published, in a small duodecimo [sic, for octavo] volume, a translation of Lavater’s “Aphorisms on Man;” which work, written in German, was dedicated to him by this early and esteemed friend. The dedication is dated October, 1787.5

Knowles’ generally valuable biography is, I would suggest, almost certainly wrong on this particular point, the victim perhaps of a printer’s slip.6↤ 6 As occurs elsewhere in the Life, e.g., I, 287-88, where Knowles’ first meeting with Fuseli in 1805 is dated 1825, the year of Fuseli’s death. Although there is some reason to believe that the first edition of Aphorisms was not widely circulated until the spring of 1789, when Christopher Moody wrote that the volume was “now before us,”7↤ 7 [Christopher] Moo[d]y, review of Lavater’s Aphorisms, in The Monthly Review, 80 (June 1789), 526-28. When Moody writes that the “little book of aphorisms” is “now before us” (p. 526), he may simply mean that the work is now under review. Moody’s review first noted by Allentuck, p. 97. other evidence indicates that the book was in print, and therefore available to Blake, as early as perhaps May (the date of the “Advertisement”), and very probably by June or July 1788. The July 1788 issue of Joseph Johnson’s recently founded Analytical Review carried two notices of the book. Aphorisms is listed as one of the “Books and Pamphlets Published during the first six months [i.e., by June] of 1788,”8↤ 8 Analytical Review, 1 (July 1788), 377. Aphorisms is described here, as in Knowles above, as a duodecimo rather than an octavo volume, though I suspect that these terms were used rather loosely to indicate relative size rather than exact format. and a critic identified as “N” gives a fairly extensive account of the book, with a generous selection of aphorisms: ↤ 9 Analytical Review, 1 (July 1788), 286-89. In fact, the volume contains only 633 aphorisms, numbered 1-189, 200-643; this misnumbering was corrected in the second edition of 1789. It is of course possible that the July number of Analytical Review came out after July (the combined title page for volume 1 reads “From May to August, Inclusive, 1788.”), though I have no solid evidence that this in fact happened.

The author of these Aphorisms seems to have proceeded from the head to the heart, or rather the study of one enabled him to trace the different forms the passions wear, and to discriminate many of their almost endless combinations. We with pleasure read the only maxims extant written by a benevolent man; and perhaps it is necessary begin page 24 | ↑ back to top 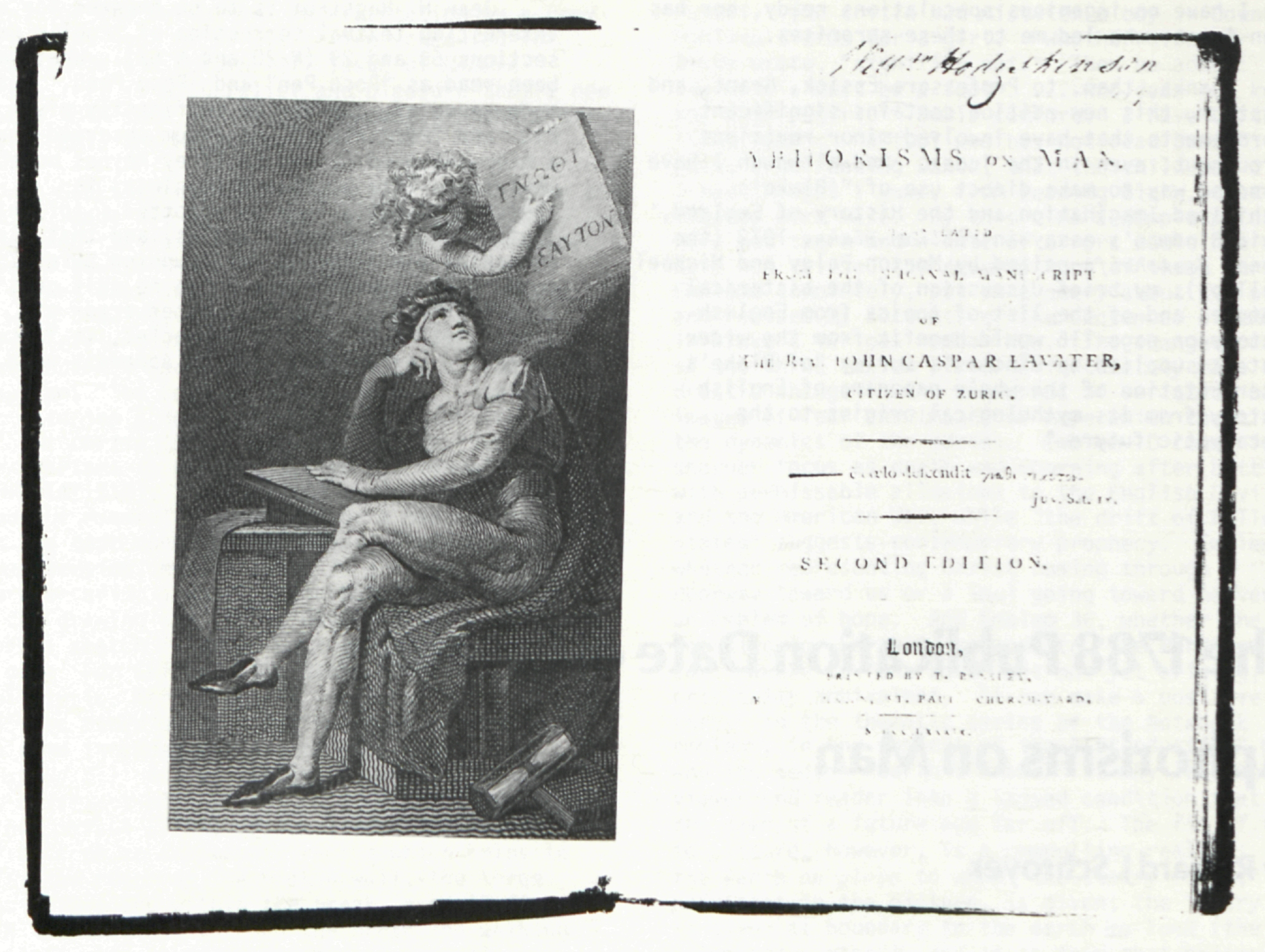 to love the human race, and to be one of its ornaments, before the virtues and vices which adorn and debase it can be discerned and unfolded. He must have genius who can point out its characteristics, and display the sublime he describes. [Following an accurate transcript of the “Dedication” and “Advertisement,” the reviewer continues.]

Many of the aphorisms are so well expressed in the translation, that they have all the merit of an original thought almost intuitively struck off. . . . The blemishes . . . are trifling; and the work, taken collectively, we think the most interesting and original production we have for a long time perused, and that it does equal honour to the goodness, discernment, and sensibility of the author.

The existence of this dated review, together with the facts and inferences already available, permit us to construct a fairly detailed outline of the history of Aphorisms. During the autumn of 1787, when, as Blake later recalled, “Flaxman was taken to Italy” and “Fuseli was given to me for a season,”10↤ 10 Letter from Blake to Flaxman of 12 September 1800; E 680. The Flaxmans evidently left England in August 1787 and made their way slowly to Rome by way of France. See Eliza Meteyard, The Life of Josiah Wedgwood (London: Hurst & Blackett, 1865), II, 503-06. Fuseli’s friend Lavater was rapidly composing his “verdicts of wisdom on the reports of experience,”11↤ 11 J. C. Lavater, Aphorisms on Man (1788), “Advertisement,” p. v (perhaps by Fuseli). a task he evidently completed by 13 October, when the dedication to Fuseli was written. By the end of the year, part of the collection was published in German as Vermischte unphysiognomische Regeln zur Selbst- und Menschenkenntniss, but without the dedication. The part of the collection not published in 1787 was apparently reserved for a second volume of 1788.12↤ 12 The colophon of the first volume in German reads: “Zurich Freytags den 30. Nov. 1787.” I have not seen the second volume of 1788, though Miss Hilde Siegl of the Deutsche Bibliothek, Frankfurt, reports that the title page reads: Vermischte unphysiognomische Regeln zur Menschen- und Selbstkenntniss Von Johann Kaspar Lavater. Zum Bessten der Armen [the last seven words handwritten, perhaps by the author]. 1788. Presumably, the aphorisms found in Fuseli’s translation, but not in the Regeln of 1787, were included in the Regeln of 1788. For Lavater’s habit of dedicating his works to friends, see Franz Muncker, “Lavater,” in Allgemeine Deutsche Biographie, 18 (1883; rpt. Berlin: Duncker & Humbolt, 1969), 783-94. Between October 1787 and May 1788, Fuseli translated Lavater’s Regeln into English aphorisms which, as far as I can determine, fairly reflect the spirit of the originals. And it was probably during the same period that either Fuseli or Johnson employed Blake—who may have begun to experiment with illuminated printing—to engrave the frontispiece after Fuseli.13↤ 13 On the frontispiece, see Ruthven Todd, “Two Blake Prints and Two Fuseli Drawings with some possibly pertinent speculations,” Blake Newsletter, 5 (Winter, 1971-72), 173-81. According to Bentley & Nurmi, p. 137, “There were no plates in the ‘Third Edition’ of Dublin, 1790, or the ‘Fifth Edition’ of Newburyport, 1793.” The copy of the Dublin edition of Aphorisms in the University of Western Ontario Library, however, contains a frontispiece copied from Blake’s and is inscribed “P. Maguire Sculpt.” (Illus. 2.) “P. Maguire” is very probably Patrick Maguire, an Irish engraver about whom I know very little except that he was “admitted as a student in the Dublin Society’s School in 1783, and afterwards worked in Dublin for many years [c. 1790-1820], as an engraver in Trinity Place and Anglesea Street” according to Walter G. Strickland, A Dictionary of Irish Artists (Dublin: Maunsel, 1913; reprint ed., Shannon: Irish Univ. Press, 1969), II, 86-87. By May 1788, when Blake’s first plate for Lavater’s major work, Essays on Physiognomy, was issued,14↤ 14 Bentley & Nurmi, pp. 137-38. Aphorisms was very probably ready for the press. By July 1788, as we have seen, the first edition was in print and was being discussed openly, at least in Johnson’s house journal.

That Blake did in fact obtain his copy of the book in May-July 1788 is probable but not certain. begin page 25 | ↑ back to top 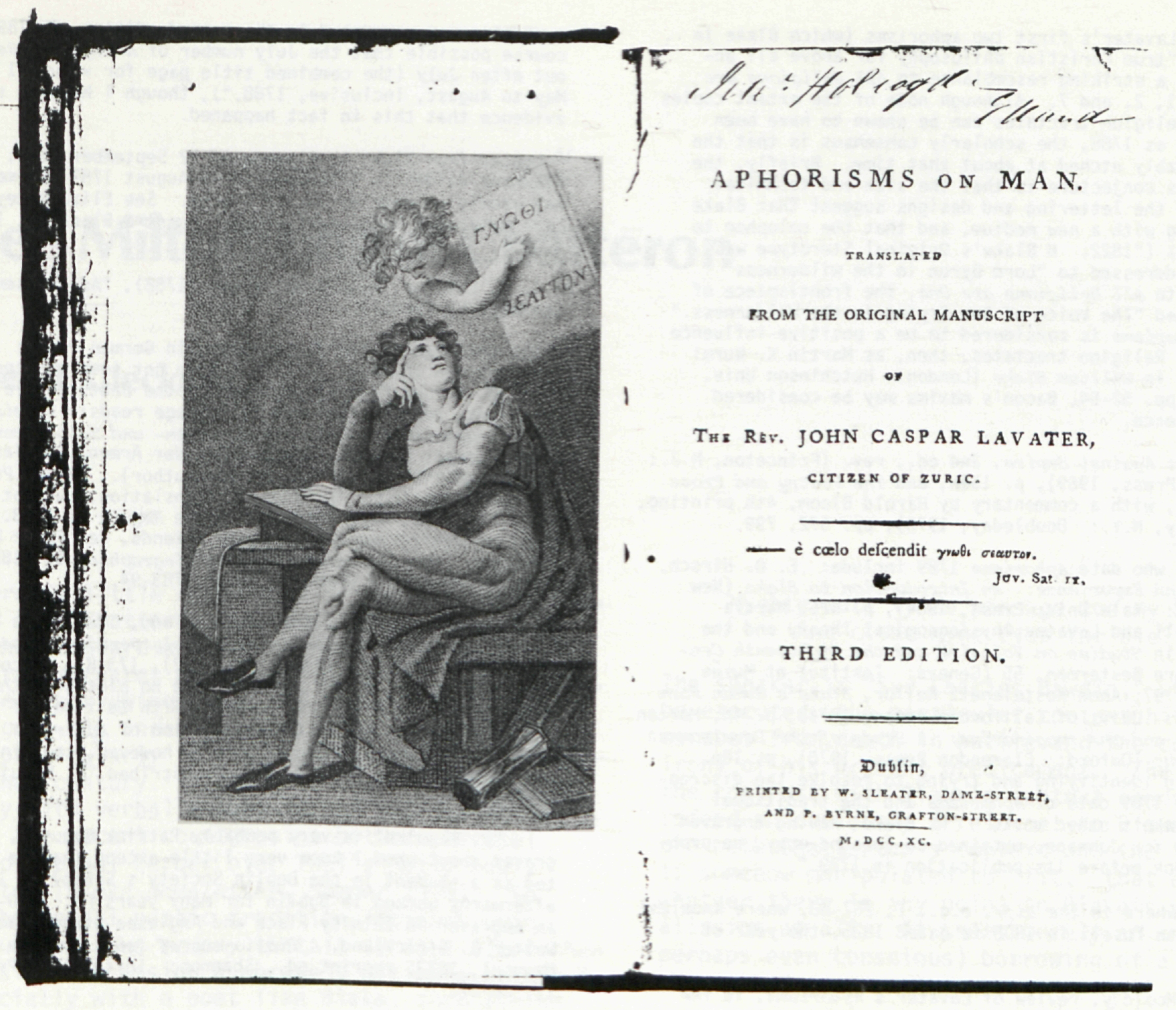 As the engraver of the frontispiece and as a friend of the translator, Blake seems to have had both opportunity and motive to acquire and begin to annotate his copy of Aphorisms as soon as it became available. Further, nothing in Blake’s annotations would contradict a date of composition as early as spring or summer 1788, and the evidence of offsets gathered by G. E. Bentley, Jr. may indicate that Blake received an unbound—and therefore possibly a pre-publication—copy of the book, perhaps in partial payment for engraving the frontispiece.15↤ 15 Bentley & Nurmi, pp. 207-08. Since Blake apparently kept his copy of Aphorisms by him until his death in 1827, it is not impossible that some of his annotations were made long after 1788. See G. E. Bentley, Jr., Blake Records (Oxford: Clarendon Press, 1969), pp. 288-89, 355-56. In sum, although several problems in Blake’s chronology await better solutions (or at least more precise definitions) than are now available, the 1788 publication date of Lavater’s Aphorisms would seem to be fairly secure, and the traditional chronology of Blake’s annotations and Natural Religion tractates, as a consequence, intact.

In his Life of William Blake, Alexander Gilchrist tells a story about Blake, Fuseli, and Blake’s copy of Lavater’s Aphorisms which has always seemed to me to have the ring of truth. “Blake,” Gilchrist reports, “showed his notes to Fuseli; who said one could assuredly read their writer’s character in them.”16↤ 16 Alexander Gilchrist, Life of William Blake, ed. Ruthven Todd, rev. ed. (London: Dent, and New York: Dutton, 1945), p. 54. I had hoped to find that Fuseli’s revisions for the second edition of Aphorisms (1789) would show that he read and incorporated into his revised text some of the suggestions found in Blake’s annotations. Alas, a careful comparison of the two editions against Blake’s comments does not confirm or deny Gilchrist’s story, and it must therefore remain in the limbo of unsubstantiated anecdote.