In the design to Jerusalem 23 where Albion utters “his last words, relapsing! / Hoarse from his rocks, from caverns of Derbyshire & Wales / And Scotland” (J 23:26-28, E 167), Blake shows a series of separate, enclosed human forms who are apparently the inhabitants of these caverns. If Blake is making a specific reference here it is probably to the Devil’s Arse cavern in Derbyshire (see Damon, Blake Dictionary) which was inhabited by the poor during Blake’s lifetime.1↤ 1 See James Pilkington, A View Of The Present State Of Derbyshire, (Derby 1789), I, 63-68. J. Johnson is given on the titlepage as one of a pair of London Booksellers. Charles Leigh’s The Natural History Of Lancashire, Cheshire, And The Peak, in Derbyshire, Oxford, 1700, has a large, unsigned engraving of the Devil’s Arse showing “the Area where the Persons and the Houses are, where a great many of the poor Inhabitants live” (Bk. 1, p. 192). Blake’s knowledge is accurate then, but what of the “fables” of the “caverns in Cornwall, Wales, Derbyshire, and Scotland” which had been the subject of his “visionary contemplations” in A Descriptive Catalogue (40; E 533)?

The absorption of the Peak, East Moor and the caverns and mines of Derbyshire (see Blake Concordance) into Blake’s myth in Jerusalem may stem from his imaginative reading or recollection of another of Leigh’s plates which illustrated the interior of Pooles Hole in the same county. This plate shows a guide and a pair of tourists undergoing 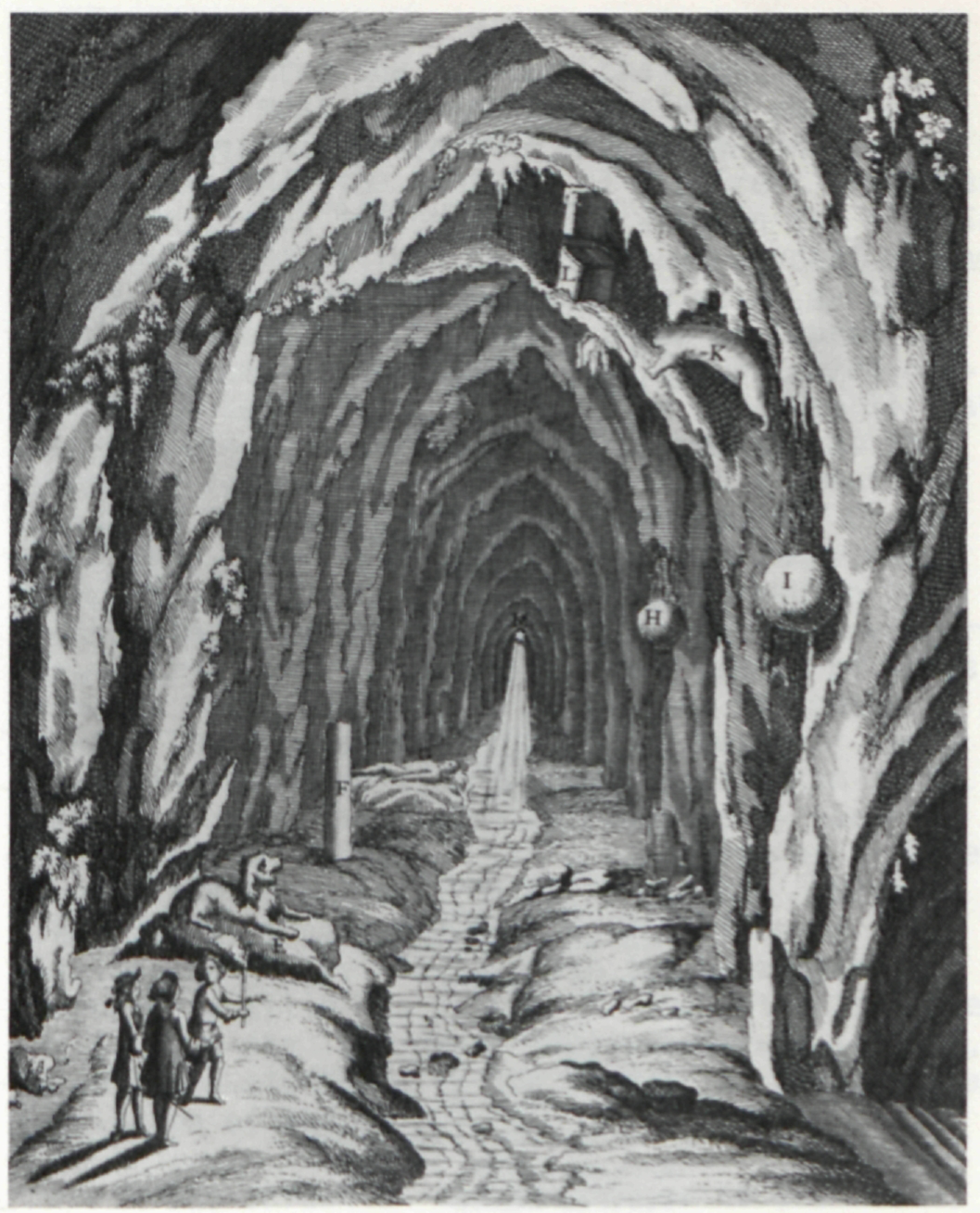 Illus. 1, “The Devil’s Arse,” from Charles Leigh’s The Natural History of Lancashire, Cheshire, And The Peak, in Derbyshire, Oxford, 1700. 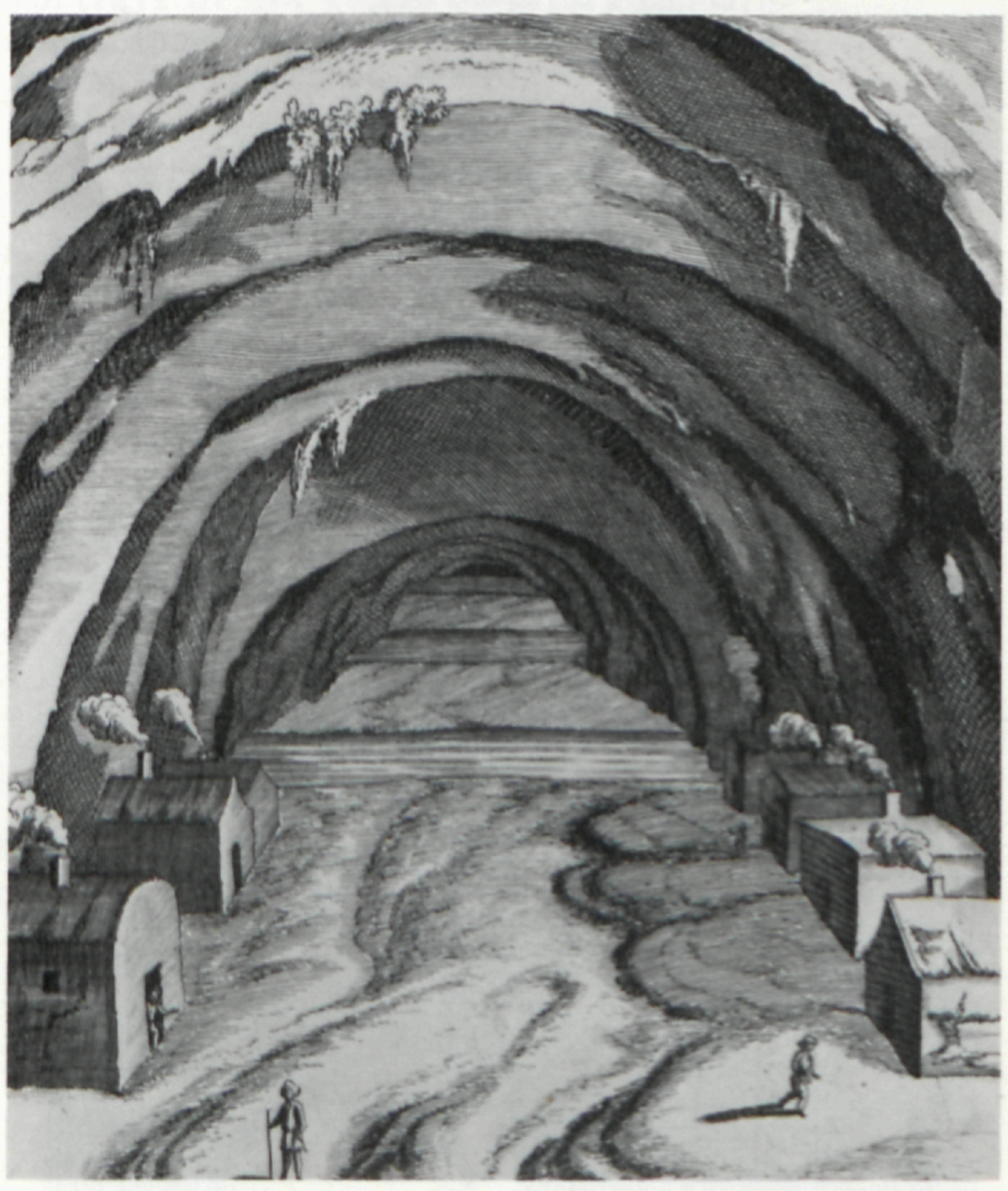 Illus. 2, “Poole’s Hole,” from Leigh.
begin page 35 | ↑ back to top “the Diversion of beholding various Representations produced by the petrifying Water continually dropping from the Roof and Sides of the Rock” (Bk. 3, p. 43). The shapes produced are stalactites and stalagmites plus the strong visual fancy of the beholder. Leigh explains their popular interpretations as (E) a lion; (F) the “Queen of Scots Pillar”; (H) and (I) as globes of “Alabaster Sparr” called “the Font” and “Mr. Cotton’s Haycocks”; (K) “the Flitch of Bacon” and (L) “the Chairs” (Bk. i, pp. 189-90).

The most interesting figure from the Blakean point of view, however, is that of (G) “the Figure of a Human Corps, formed likewise by the Dropping of the Water from the Top of the Arch and the Sides.” It is probable that B. knew of this figure in Leigh’s plate2↤ 2 Another oddly Blakean part of Leigh’s plate is (B) “The Child that was born of a Lancashire Gentlewoman with the Representation of a Flame upon its Body, the Mother being affrighted with that terrible Flame when the City of London was burned” (Bk. 1, p. 188). and associated its identification by the local people as a memorial or “fable” of Albion who, in Jerusalem, is also “petrified” (J 34[38]:1, 7, E 177-78: J 46[32]:5, E 193) but awaiting revival: “Albion mov’d . . . / His stony members” (J 95:2-4, E 252). With this interpretation the solitary pillar now standing beside the human figure can be recognized as a remnant of the sixteen pillars erected when:

the merciful Saviour in his arms
Receiv’d him, in the arms of tender mercy and repos’d
The pale limbs of his Eternal Individuality
Upon the Rock of Ages. Then, surrounded with a Cloud:
In silence the Divine Lord builded with immortal labour,
Of gold & jewels a sublime Ornament, a Couch of repose,
With Sixteen pillars: canopied with emblems & written verse. (J 48:1-7, E 194)

These crucial differences between vision and mere degenerate fancy make it clear why the eighteenth century visitor to Pooles Hole saw a similarity between the cave’s interior and the interior of a church. Instead of the “Spiritual Verse” of the Decalogue, Joshua, Judges, Samuel, Kings, Psalms, Prophets, Gospels and Revelation (J 48:8-11, E 194) which surrounds Albion’s sleeping form, they only saw the rock shapes as an “Organ and Choir-work” and Font (Bk. 3, p. 43).

Albion’s movements in Jerusalem imply that his resting place is a variant of Pooles Hole. After a temporary manifestation of rebellion when his “Great Voice of the Atlantic howled over Druid Altars” and “Round the Rocky Peak of Derbyshire London Stone & Rosamonds Bower” (J 57:5,7, E 205), Albion “fled beneath the Plow / Till he came to the Rock of Ages. & he took his Seat upon the Rock” (J 57:15-16, E 205). The Peak’s prophetic elevation (but capable of druid cruelty if reason usurps, J 21:34, E 165) has as its contrary the “horrid Chasm” beneath (“the most terrible Chasm that I ever yet beheld” Leigh on Pooles Hole, Bk. 1, p. 187), where a more deadly liquid drips:

Derby Peak yawnd a horrid Chasm at the Cries of Gwendolen, & at
The stamping feet of Ragan upon the flaming Treddles of her Loom
That drop with crimson gore with the Loves of Albion & Canaan
Opening along the Valley of Rephaim, weaving over the Caves of Machpelah. (J 64:35-38, E 213)

An intermediate, earthly plain of existence is indicated as East Moor in Derbyshire, a level state with the potential for either reasoning slavery or prophetic independence:

The Mothers love of obedience is forgotten & you seek a Love
Of the pride of dominion, that will Divorce Ocalythron & Elynittria
Upon the East Moor in Derbyshire & along the Valleys of Cheviot. (J 93:4-6, E 251)

Enitharmon’s words in the latter passage unconsciously reflect how the moor of the surface of the physical land of Albion is the level on which the battle for vision is fought.

Blake’s use of the three levels of Derbyshire, peak, moor and cavern, illustrates how neatly geographical locale can be adapted for an imaginative purpose.