Clark Stewart’s drawings for The Marriage will cause mixed reactions in many a Blake enthusiast. Intended as a personal response to Blake’s visionary cosmology, Stewart’s designs incorporate familiar Blakean motifs (mundane shell, batwinged spectre, and flocks of 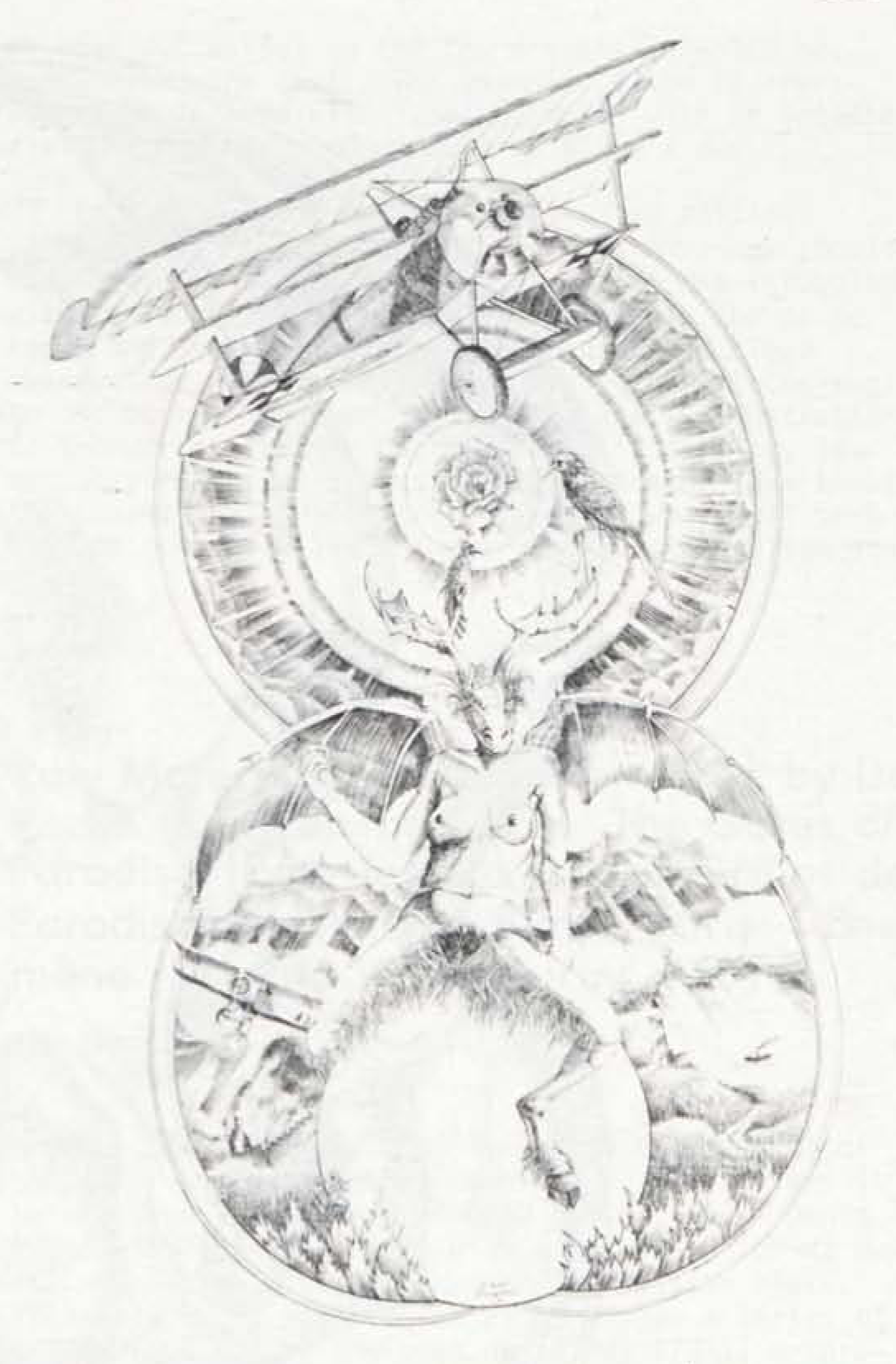 sheep) with some wildly disparate ones (World War I and II planes and tanks, top hats and a jack-o-lantern). As a result, the combined images in these drawings create a simultaneous sensation of déjà vu and culture shock in the viewer. This kind of liberal play within the hallowed territory of Blake’s own illustrations may well be frowned upon by the Blake purist. However, seen as an extension of—rather than an intrusion upon—Blake’s designs, these drawings present a fresh interpretation[e] of the artist-poet’s well-thumbed iconographical system.

In style, Stewart’s drawings are of a gorgeously detailed, linear character not unlike the graphic works of Dürer. They display the variety of texture, depth of space, crinkled drapery patterns and tightly packed compositions that characterize works of the Northern Renaissance. Although Blake often borrowed from such engravings, he inevitably simplified the figures and flattened the spatial representations in his own work. Thus, with their Northern Renaissance flavor, Stewart’s illustrations resemble Blakean, sources more closely than Blake designs. Both Blake and Dürer were skilled at combining many different symbolic elements into a cohesive whole. Unfortunately, Stewart’s compositions lack this quality and too often appear overworked, disjointed or contrived e.g., pls. 7, 11, 13). The unifying device of a frame is only successful in some of the designs begin page 118 | ↑ back to top 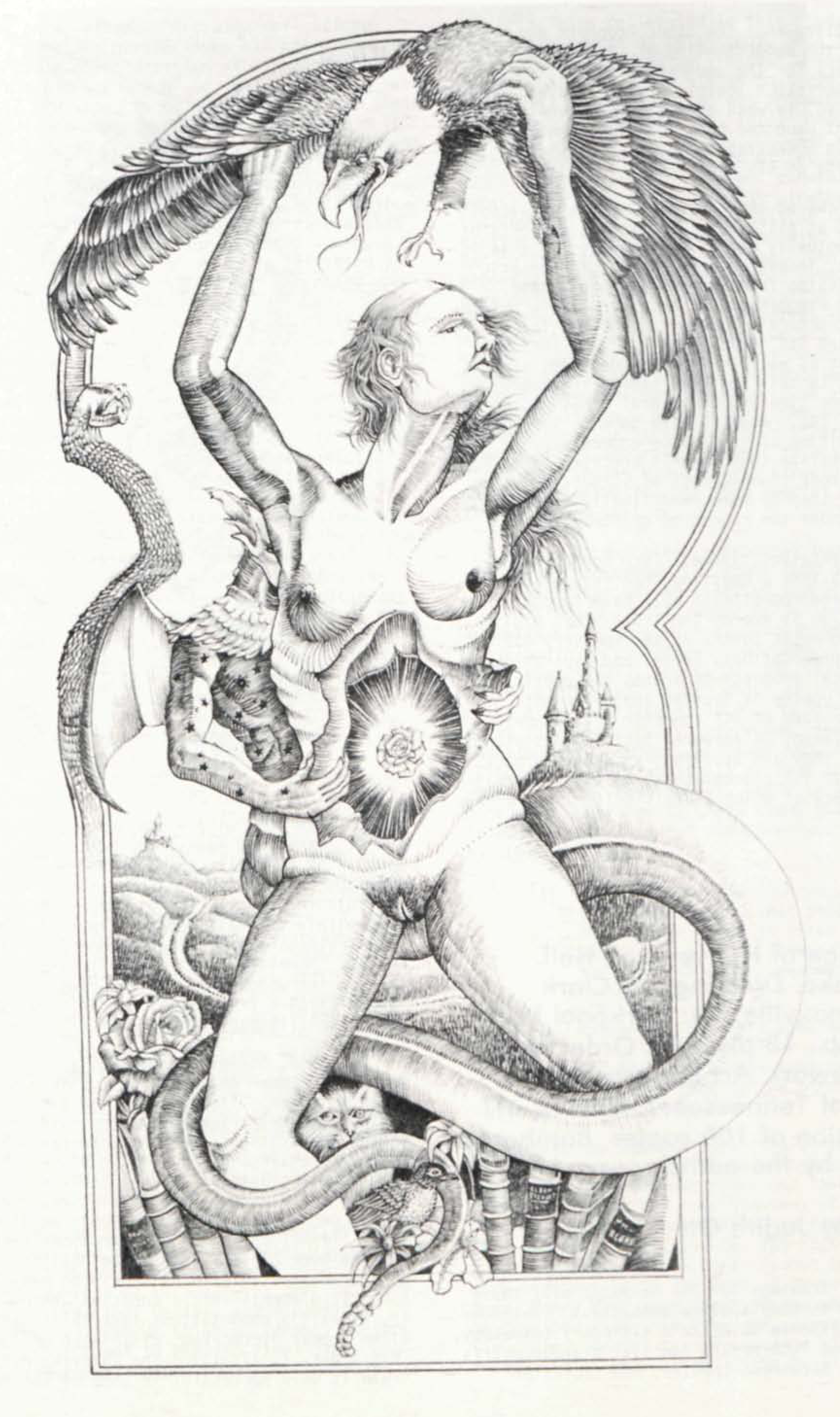 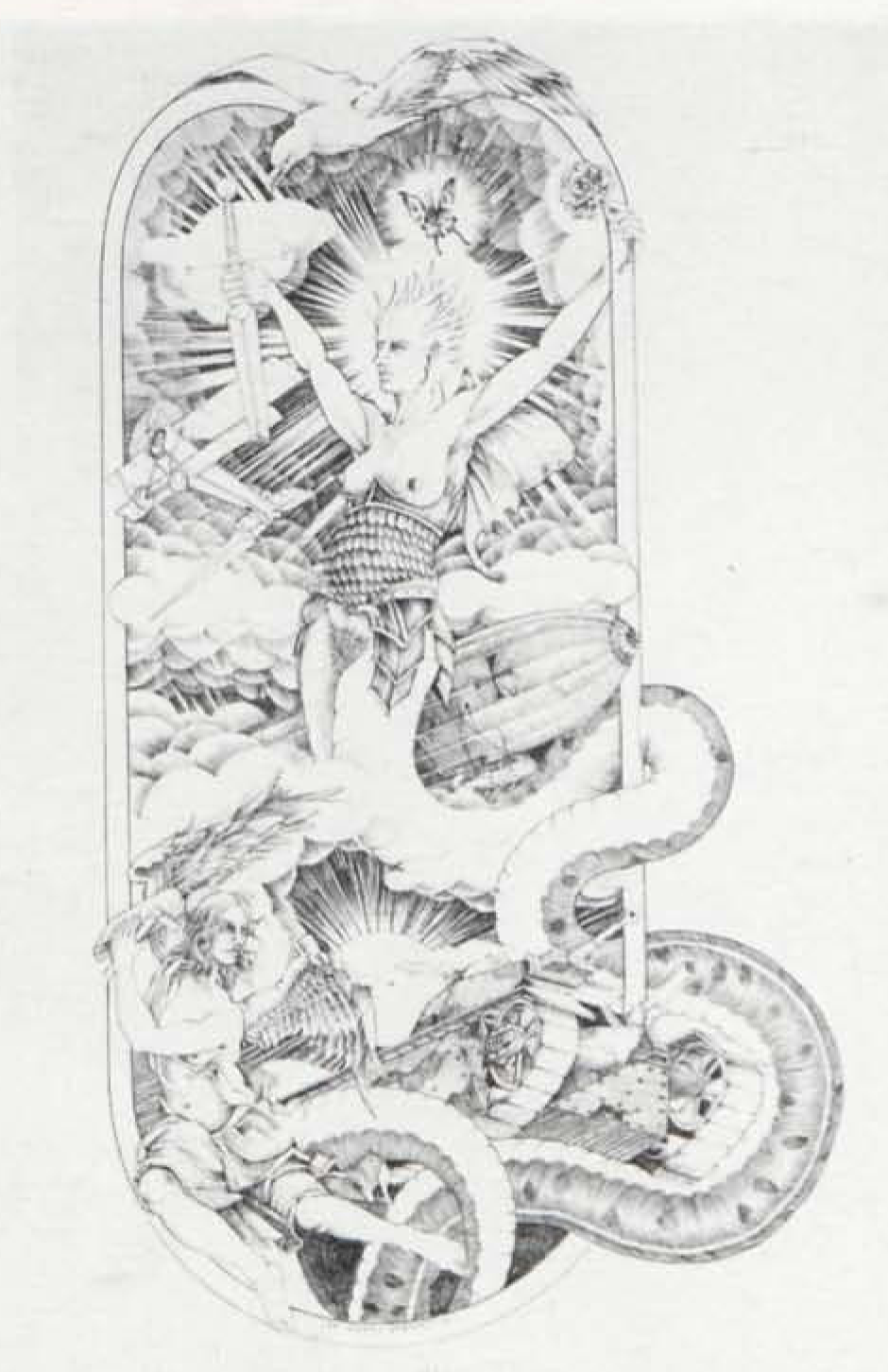 (pls. 1, 3, 8, 10)—generally the compositions suffer from a non-integrated eclecticism.

Iconographically, Stewart borrows much from Yeats and the Christian mystical-magical symbolism of the Rosicrucians (pls. 1, 4, 7, 9). The rose and other emblems like the stag and horned goat have a prominence in these drawings that is foreign to Blake. But Blake is certainly the main source of Stewart’s imagery and some of his drawings follow the text of The Marriage closely. Plate 8 is clearly the “Printing House in Hell,” complete with Dragon-Man, viper, eagle, lion (shown as a cat) and books “arranged in libraries” (Blake and Stewart’s books among them). Many of the other illustrations can be convincingly linked with a line from the text: plate 6 with the poet “sitting on a pleasant bank beside a river by moonlight”; plate 5 with “man [who] has closed himself up, till he sees all things thro’ narrow chinks of his cavern”[e] and plate 4 with “ a mighty Devil folded in black clouds, hovering on the sides of a rock.”

There are other drawings by Stewart that owe more to Blake’s images than to his text. Plates 1 and 2 compare in theme with Blake’s title-page for The Marriage and plate 3 seems to elaborate on the image of “The Sick Rose” from Songs of Experience. Although there is much of Blake in these drawings, Stewart has not attempted to illustrate The Marriage literally. Each of his plates contain fresh and intriguing combinations of old and new motifs and this is their greatest strength. Significantly, Stewart is most successful in the few designs in which he goes beyond the text. For example, plate 12 represents the “cherub with flaming sword” with an intense visionary grandeur comparable to Blake’s own.

In a well-bound, signed and limited edition, Clark Stewart’s illustrations for The Marriage should be of interest to any Blake admirer who has struggled with the poet-artist’s complex visions in the past, knows the joys born of careful thought and close observation, and is willing to apply these techniques to the work of another. As with Blake’s illustrations to the works of other poets, Stewart’s drawings inevitably reveal more about the illustrator than about the subject being illustrated. Those who would seek only an echo of Blake’s imagery should look elsewhere.