The 1931-32 season opened at the Old Vic on 22nd September and this first full season was fittingly introduced by a performance of Job, which the Camargo Society lent to the company and for which Vaughan Williams asked only a nominal fee.*↤ Reprinted from Mary Clarke, The Sadler’s Wells Ballet/A History and an Appreciation (Adam and Charles Black, London), 1955. Dolin repeated his magnificent performance as Satan and the impact of the ballet was instantaneous. The first slight programmes may not have seemed very important, but a work like Job at once revealed the power and the creative force of de Valois as a choreographer and the possibilities for serious English ballet.

Job was not only a succès d’estime but a popular success as well, and the Vic and Wells were crowded whenever it was given. It has remained in the repertoire of the Sadler’s Wells Ballet ever since and now occupies a very special place in the traditions of the company and in the affections of everyone who has been associated with Sadler’s Wells.

This “Masque for Dancing” had been invented by Dr. Geoffrey Keynes some years previously. An ardent balletomane and a great authority on the work of William Blake, he had felt that Blake’s Illustrations of the Book of Job, first published as a series of twenty-one engravings in 1825, unconsciously provided settings which could easily be translated on the stage, while there were “innumerable suggestions in his figures for attitudes and groupings, which cried out for their conversion by a choreographer into actuality and movement.” He prepared a detailed scenario for a stage production and persuaded his sister-in-law Gwendolen Raverat (née Darwin) to design backcloths based on Blake’s drawings and to colour small cut-out figures to represent the leading characters in the main scenes and groupings. These designs were prepared for a toy theatre, and when the cardboard figures were assembled they illustrated very exactly the main climaxes of the action as they were eventually to appear in the ballet. Dr. Keynes had completed his scheme for the ballet by 1927 and had persuaded Ralph Vaughan Williams (a cousin of the Darwins) to compose the music. He sent a French translation of begin page 19 | ↑ back to top 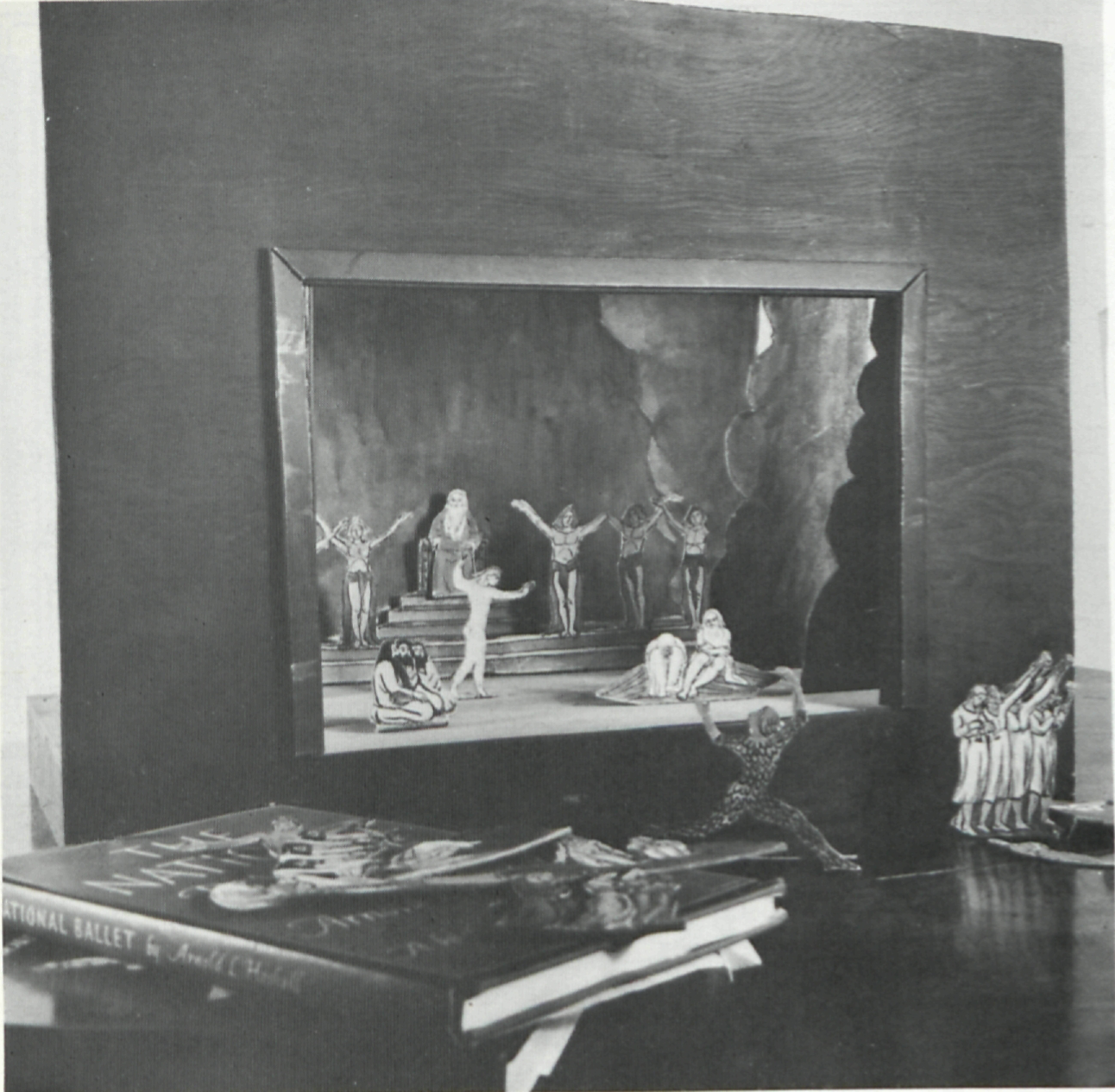 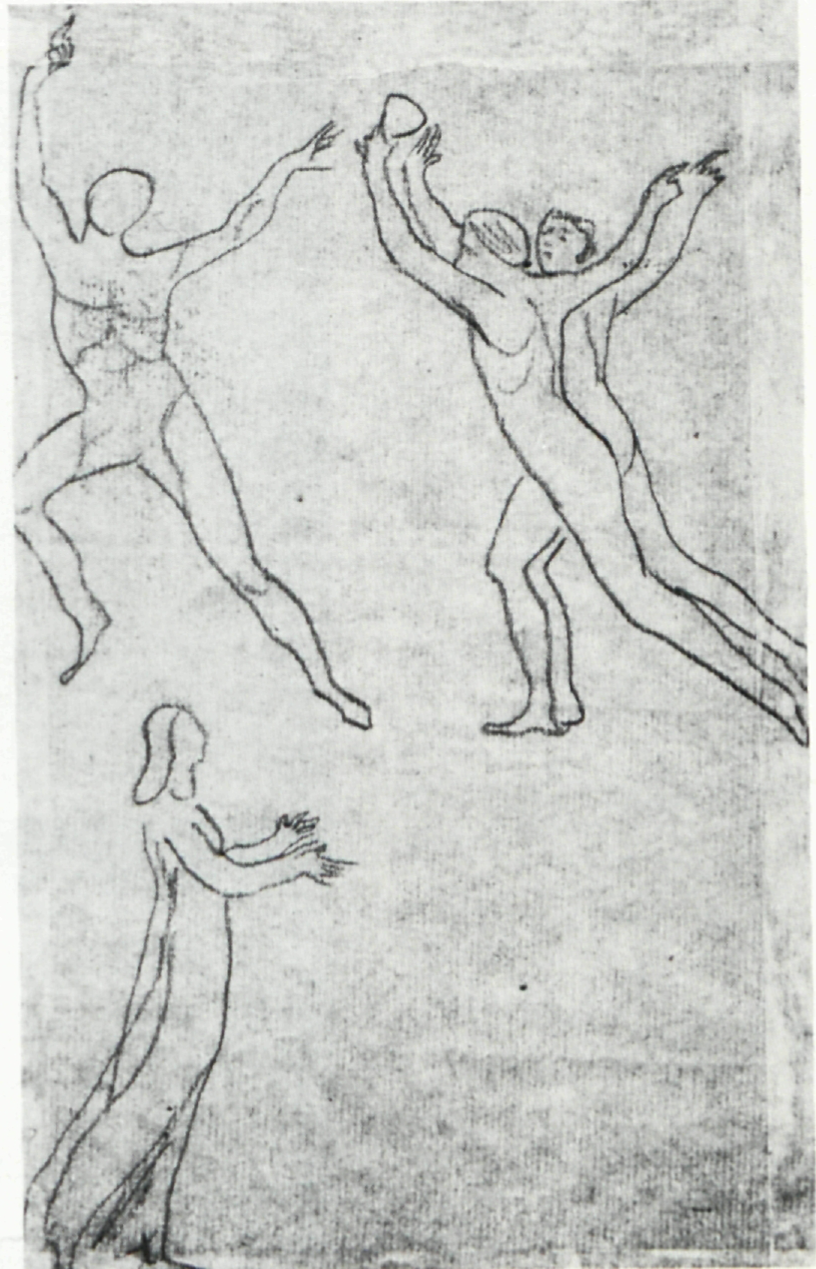 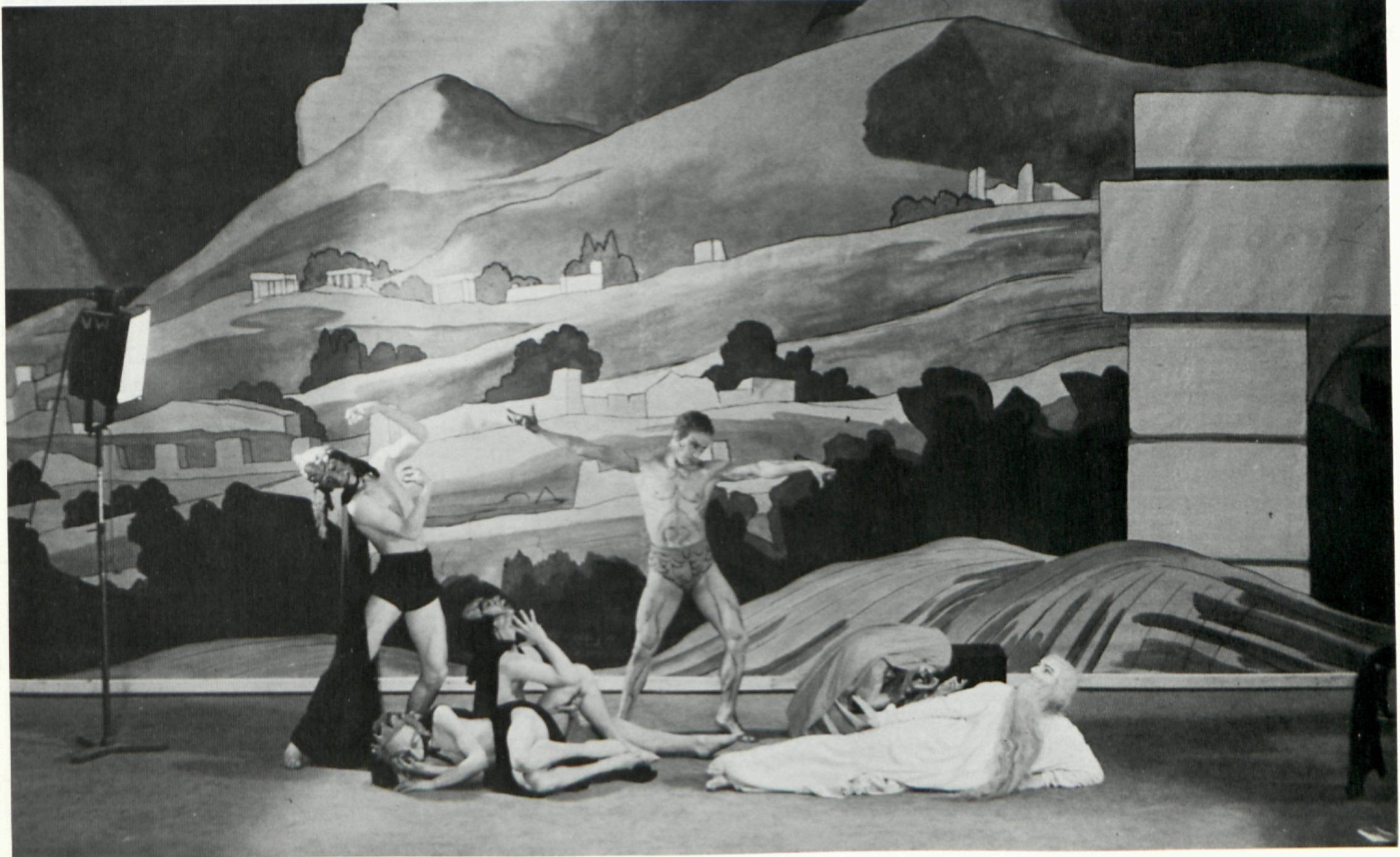 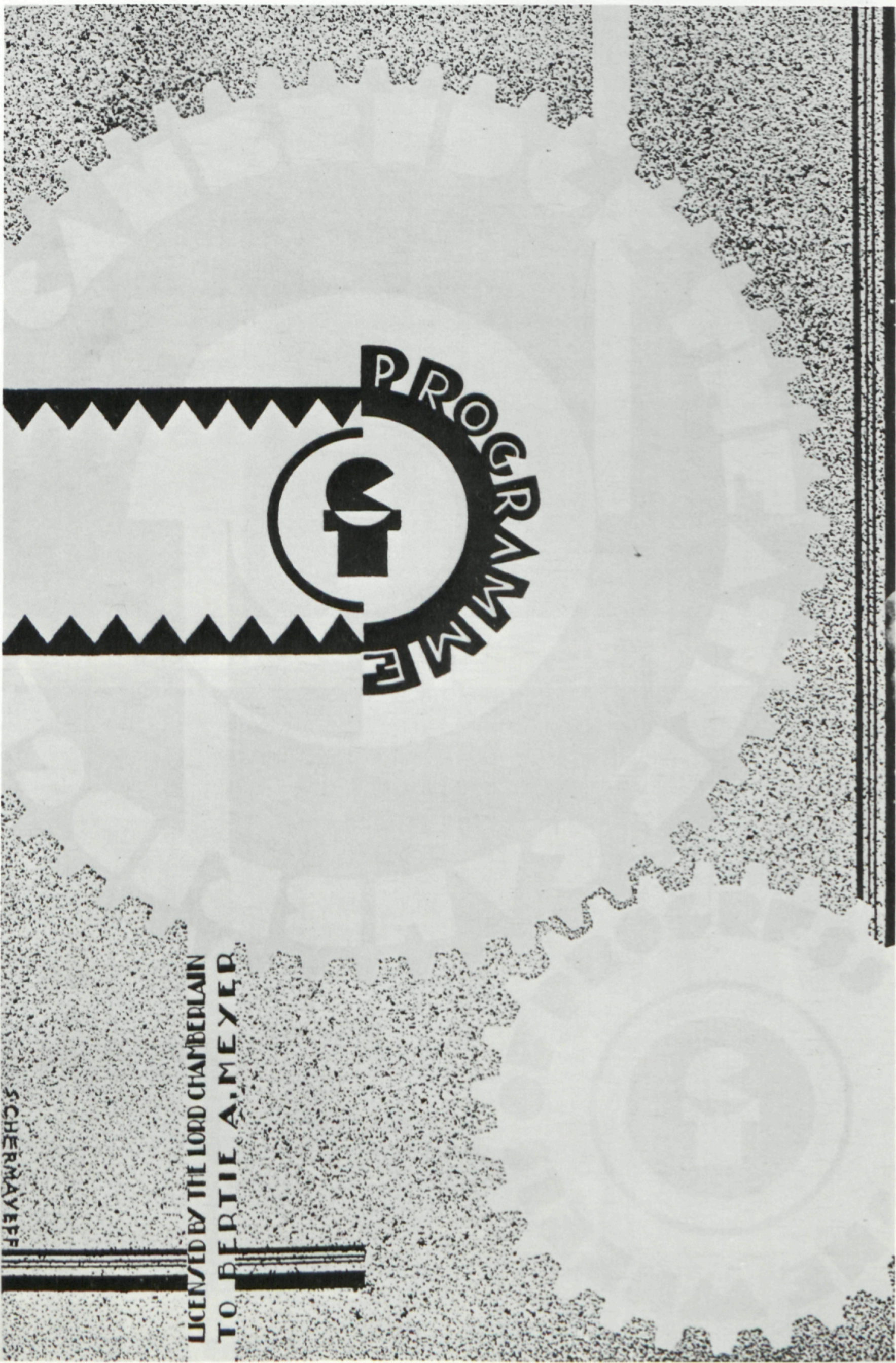 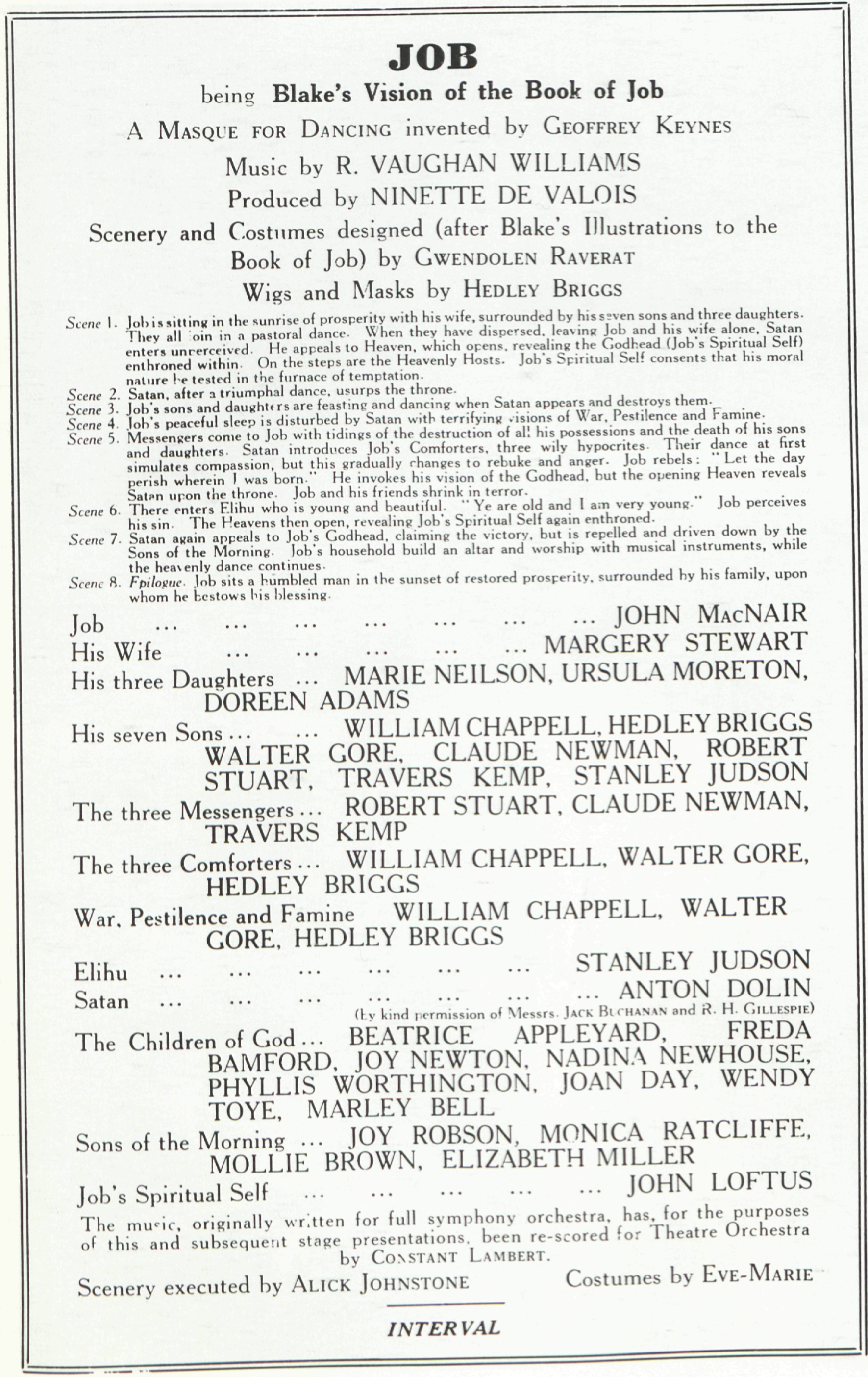 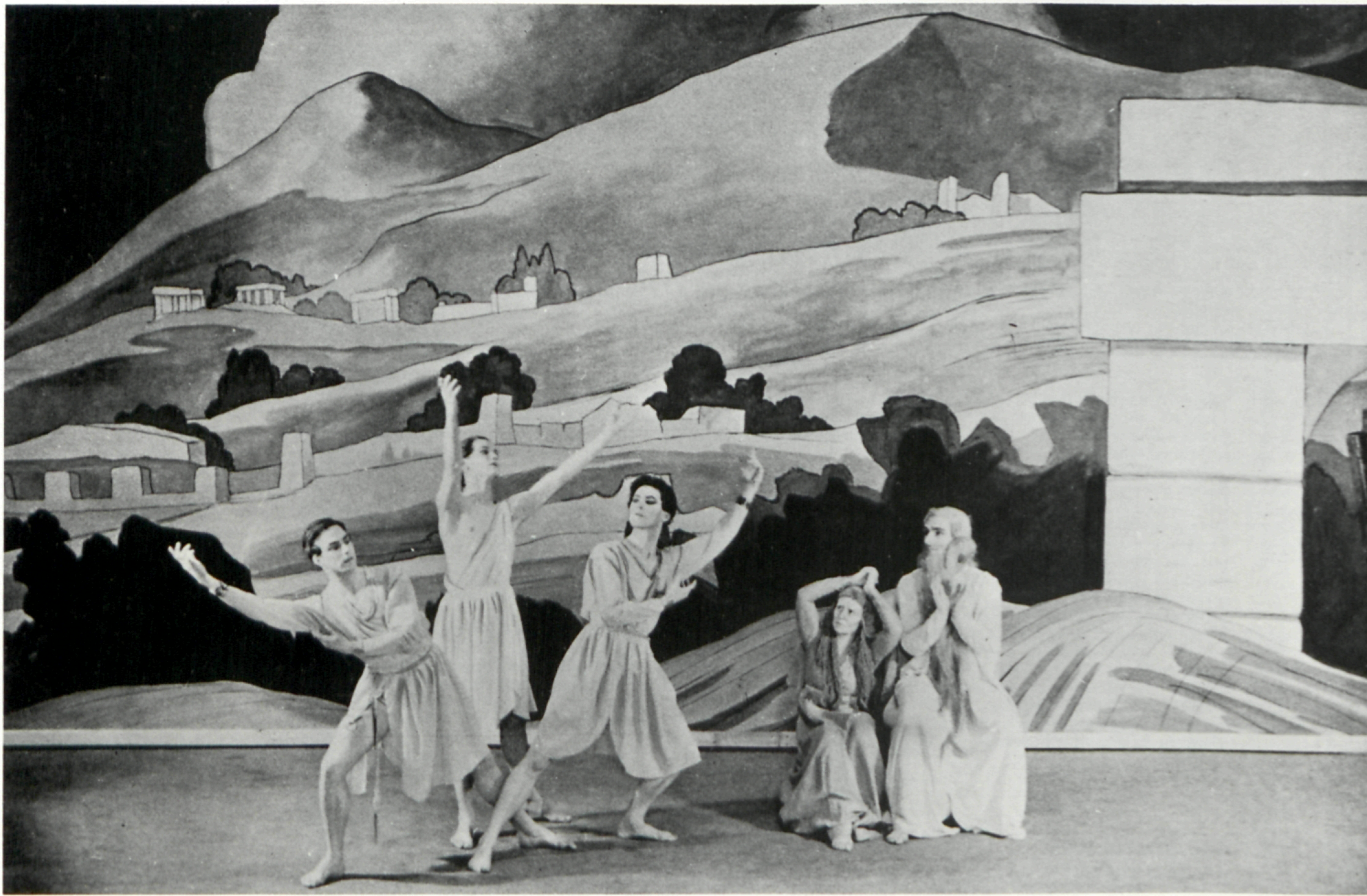 6 Michael Somes as Job, later production.   Victoria and Albert Museum.
the scenario to Diaghileff, who was at that time the only person in a position to produce such a ballet, but the subject did not appeal to Diaghileff and he rejected it as too English and too old-fashioned. Dr. Keynes can probably take credit, however, for having sown a seed in the great man’s mind which was later to bear fruit in the production of Le Fils Prodigue.

With the formation of the Camargo Society, Dr. Keynes saw another chance of having Job produced, and he invited Lilian Baylis and Ninette de Valois to come and see the models and the toy theatre. They were at once interested and it was agreed that de Valois should undertake the production, following the scenario of Dr. Keynes and using Mrs. Raverat’s designs. Dr. Vaughan Williams had stipulated that there should be no pointe work (which he detested) and that Job should not be described as a ballet, so the description “a Masque for Dancing” was adopted. De Valois made a very careful study of the Blake engravings and began to plan her production, while Mrs. Raverat set to work painting scenery at the Old Vic. The production was to be presented by the Camargo Society at its fourth programme and Geoffrey Keynes undertook to finance it, being assisted by several friends, in particular by his brother Maynard and Sir Thomas Dunhill.1↤ 1 One benefactor was later taken to a performance by Geoffrey Keynes and his wife. The eminent man sat solemnly through the opening ballet, which happened to be The Jackdaw and the Pigeons, and at the end said politely to Keynes, “Yes, old boy, very interesting. But tell me, which one was Job?” Constant Lambert rescored the music for a much smaller orchestra and Job was produced for the first time at the Cambridge Theatre on 5th and 6th July 1931. 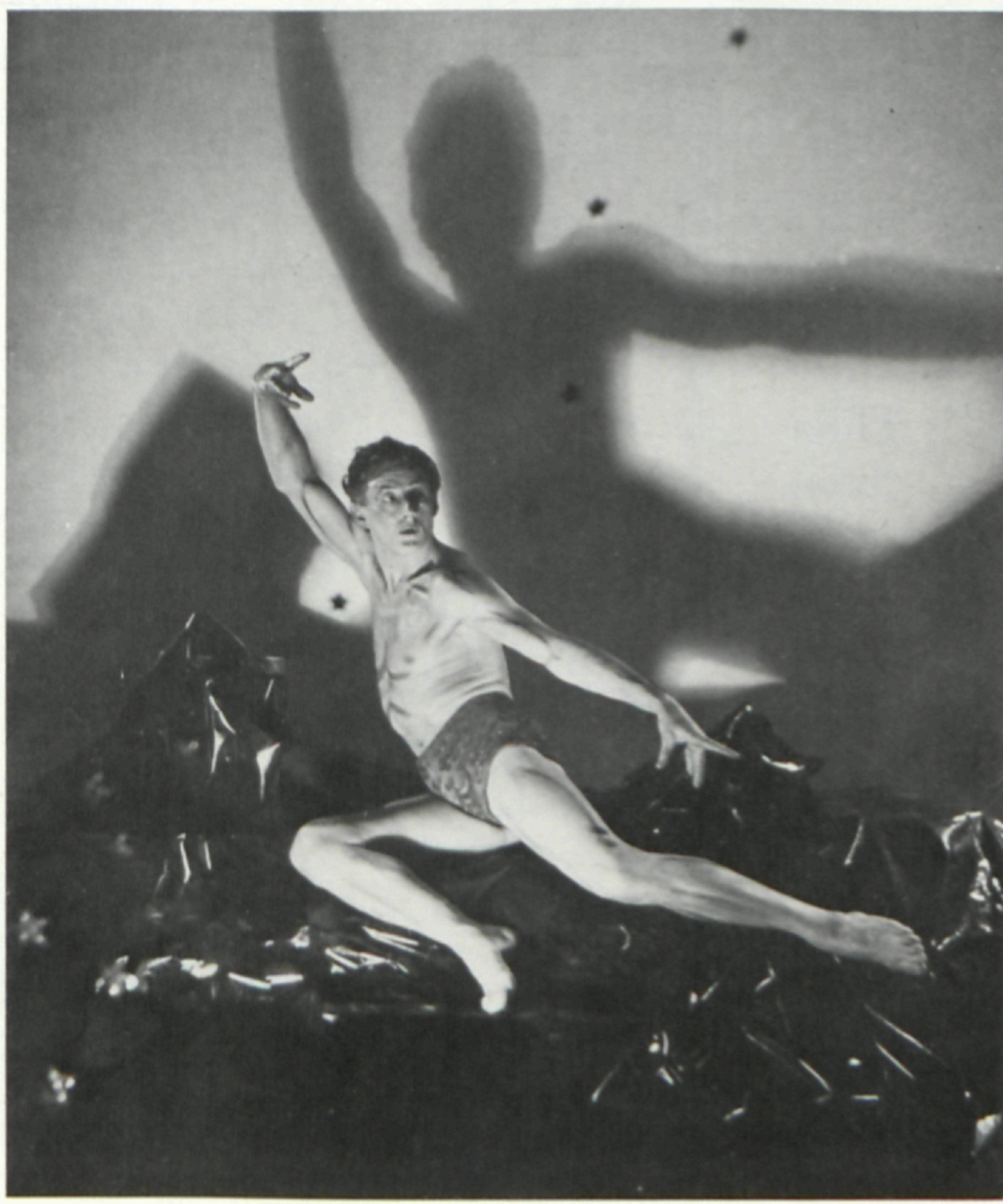 7 Studio picture of Anton Dolin for a later Raverat production.   Victoria and Albert Museum.
begin page 23 | ↑ back to top 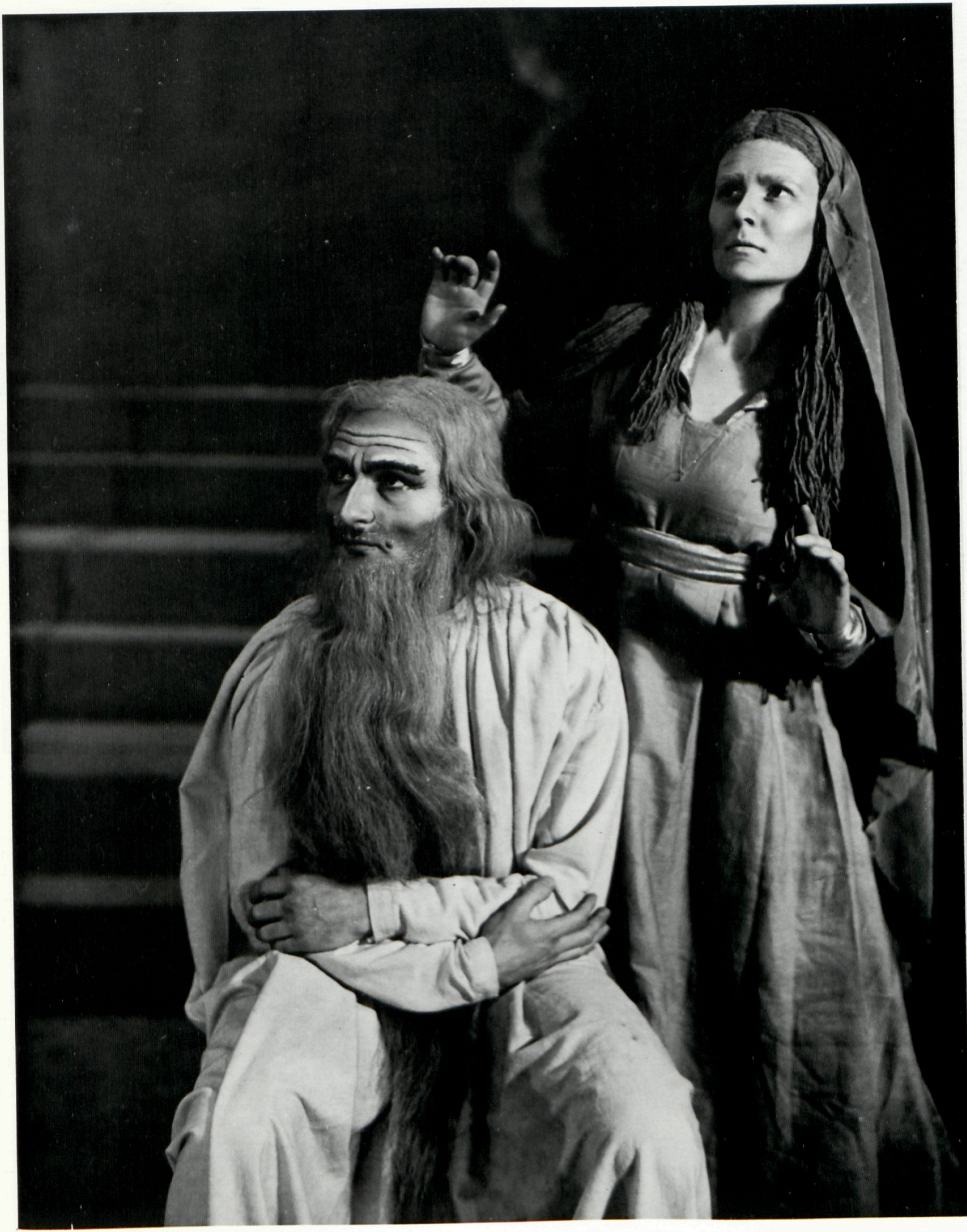 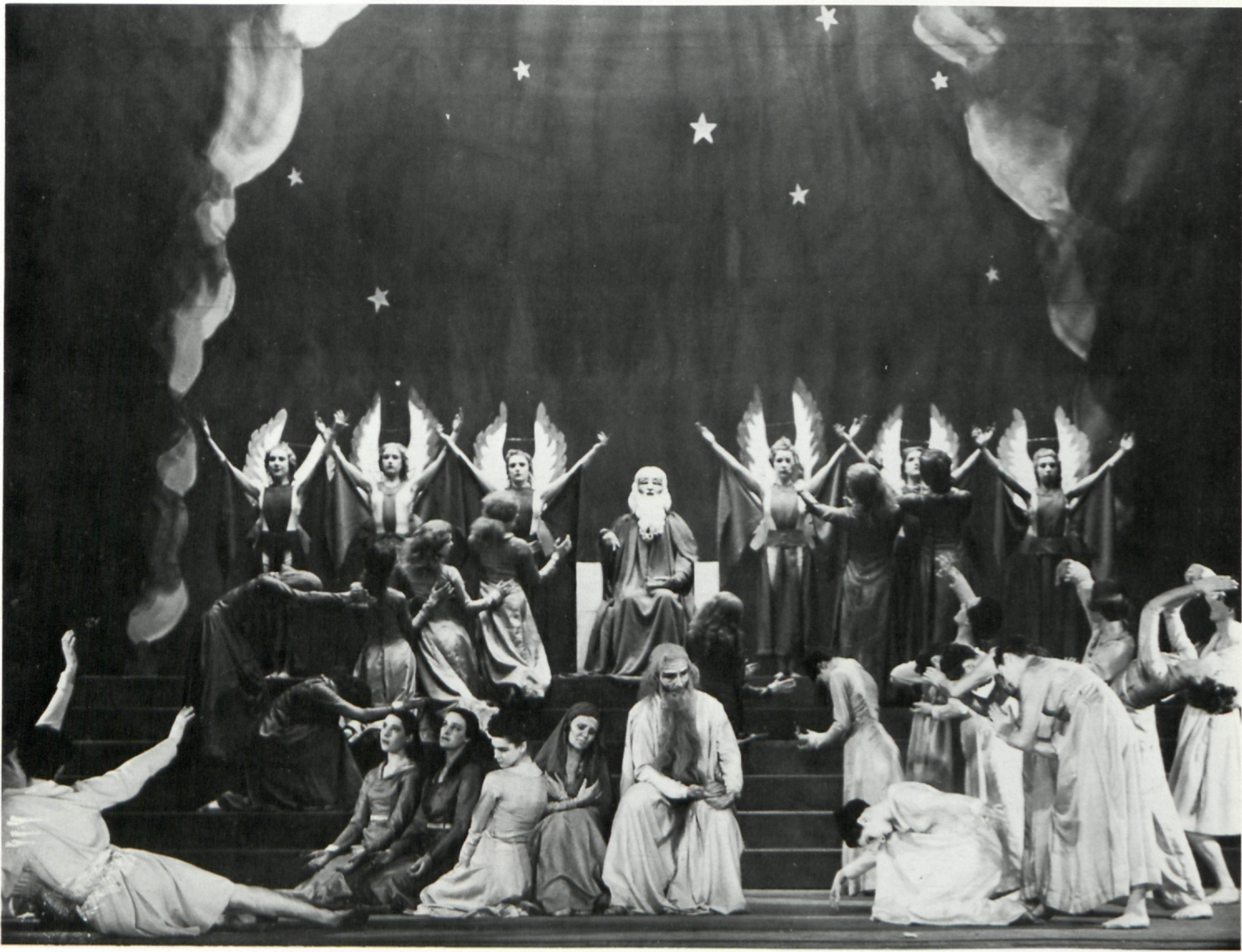 Job won much esteem for both the Camargo Society and the Vic-Wells Ballet. With Job, Edwin Evans used to say, Camargo stepped on the map of Europe. Karsavina said, “The dignity of the greatest tragedy of all ages is nowhere impaired by a mere dance for the dance’s sake, and yet this production fully answers the qualification of ballet. The quality of mime in Job is that of the flowing pattern of a well-conceived dance.” Perhaps Lydia Lopokova, at first not very enthusiastic but greatly impressed after seeing it performed at Oxford during the Ninth Annual Festival of the International Society for Contemporary Music, put her finger on the most important achievement when she wrote to Geoffrey Keynes: “My chief pleasure was that it differed from the Russian ballet tradition, the most important merit of Job.” Ashley Dukes, writing in the American Theatre Arts Monthly about the English theatre in general, said Job was by far the most satisfying achievement of the English theatre that season, representing “the impressive silence in the midst of unimpressive talk.”

Job owed no small part of its success to the performance of Anton Dolin as Satan, Blakish and devilish, yet superbly arrogant and physically magnificent in a way that none of his successors have been able to equal, although all of them (and Robert Helpman in particular) have given striking and valid interpretations. At the time of the first Vic-Wells performances Dolin was still appearing in Stand Up and Sing, but Jack Buchanan (to whom all honour) gave him permission to dance at the Vic, and his performance was a major feature of the success of the ballet—although the timing was so close that he had to take his last curtain half-dressed in evening clothes, with a taxi waiting at the stage door to whisk him back to the Hippodrome. Lilian Baylis wrote him her thanks: “Ellen Terry was one of the first great players who gave such practical help to the Old Vic, and you are the first great dancer, and I shall pray and remember you always with very great affection.”

Photo behind title: backdrop design for Job, Gwendolen Raverat. On deposit at the Fitzwilliam Museum, Cambridge; reproduced by permission of the owner. 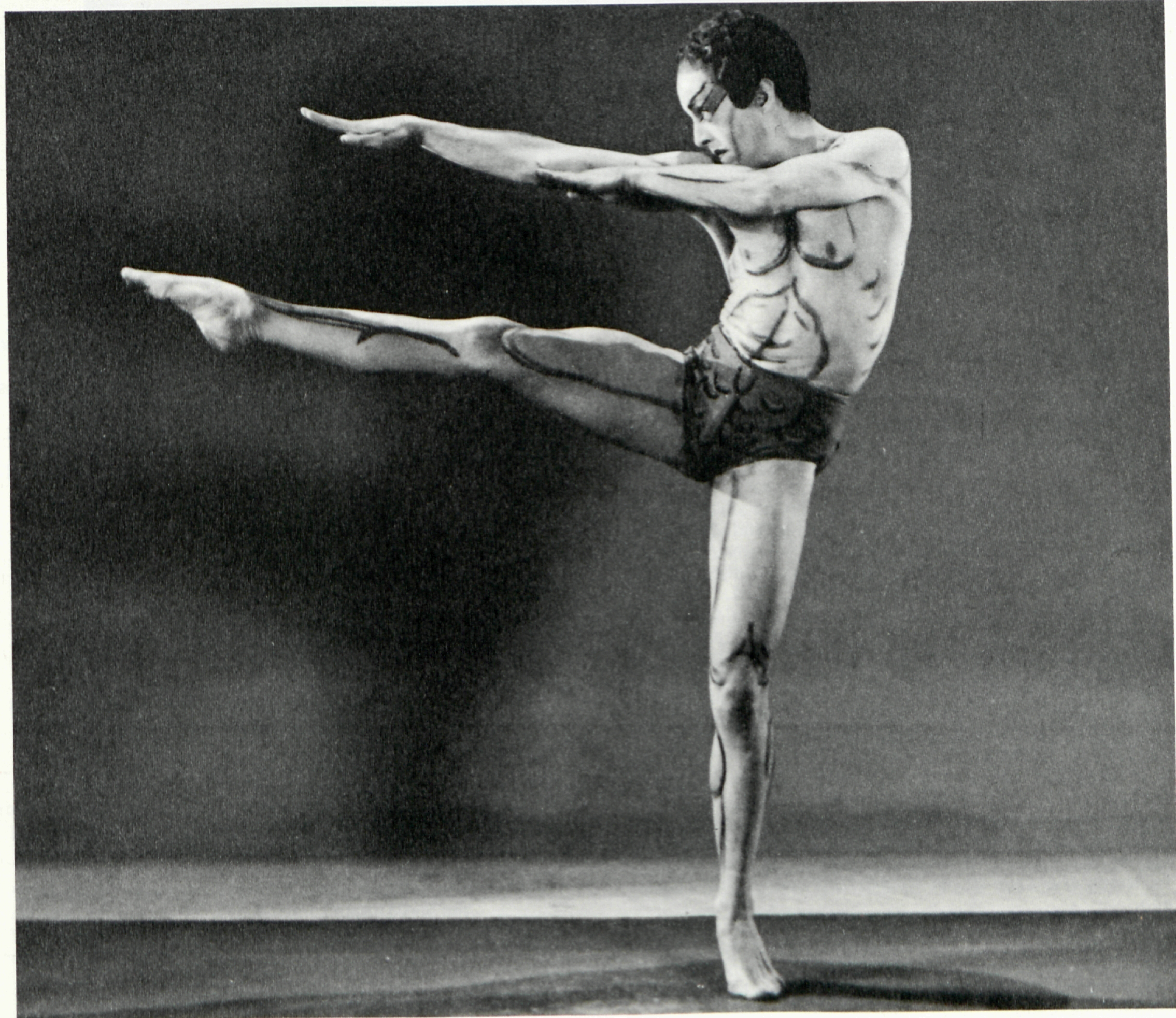