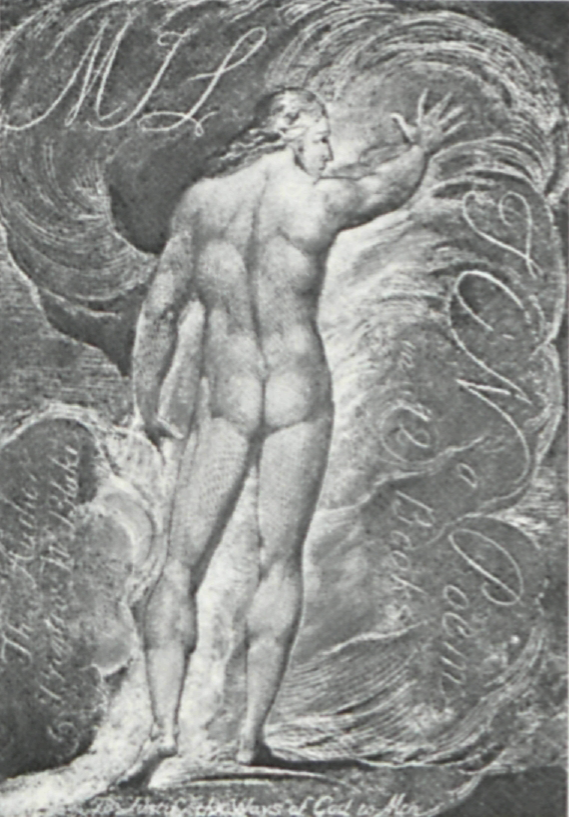 The essential argument of John Howard’s monograph on Milton is given on p. 13:

It is with Blake’s view of the process of [the psychic fall and redemption characteristic of long Romantic poems] that we are concerned here. Blake’s vision of the fall and redemption offers a way of talking about the individual’s “spiritual” makeup, a way of mapping out the architecture and landscape of the personality. Blake describes how the personality permits its own instincts of fear to imprison its creativity in delusion, an imprisonment that lasts until its creativity reasserts itself in a defiant act of self-annihilation. This imprisonment and subsequent freedom are embodied in his vision of the fall and redemption in Milton. . . . . The imprisoning instincts he called the selfhood, which is a false covering over the immortal spirit. Blake saw the selfhood as survival-oriented, manifesting itself as a hold-fast defense mechanism toward exterior reality as well as repressive enchainments of the creativity within. But Blake’s view of the selfhood encompassed even more. Because he believed that the exterior world is an emanation of the immortal, creative part of personality, his concept of the selfhood also encompassed all the defensive structures of society and man’s history.

The psychological orientation of Howard’s study produces some fresh insights into some of the individual passages he comments on, but I think on the whole it is limited by an assumption that comes perilously close to saying that Romantic poetry, which wanted to express the conflict between the imprisoning selfhood and the impulse toward free creativity and full realization of the integrated personality, might not have been written at all—or at least would not have taken the form it did—if the age had developed a psychological language adequate to express this conflict: “The psychological language necessary to express the conflict between these two forces of personality had not yet been created, and only in the imaginative analogies of poetry could a successful vehicle be found. But the age certainly had a need for such language. Without it, the writer could only project his undelineated feelings onto exterior phenomena, and describe those phenomena in a way that relfected his but semi-conscious feelings” (pp. 13-14). Specifically concerning Blake in this context, Howard adds: “Though Blake had no readymade language to reveal how these objective symbols [that projected the semi-conscious feelings] were reflections of interior states of mind, he had certainly become aware of the phenomenon, and his task was to put together a language and poetic structure that could express what he saw. He called it sublime allegory” (p. 14). Poetry in begin page 57 | ↑ back to top Howard’s esthetic is very much in the service of “concept” or idea, which could be expressed more directly if only an adequate language had been developed for it. And Blake’s “tool” for expressing his “concept of reality” was the symbol (p. 15).

Howard’s conception of Blake’s myth as expressing the conflicts within an individual personality I find disturbingly limiting and misleading, and this is not really compensated for by his effort to expand the idea of selfhood to society and its institutions in his notion of the “exterior” selfhood. To be sure, the idea can be supported by selection from among the most condensed utterances from Blake’s text. But it seems to me that the things that crystalize and institutionalize the selfhood are not identical with the selfhood but extensions of it, results of its operation. And the opposite of the selfhood is not, as Howard suggests, creativity but an opening out of the self into relationship and full identification with humanity and divinity, which may be brought about by the creativity of apocalyptic and visionary art like Blake’s and which would create the conditions for the continued production of art that expresses the whole life of man. But I think in this context that the much abused term “creativity” is not very useful or accurate. Though by the time he wrote and designed Milton Blake had greatly expanded his earlier idea of the selfhood, it still seems to me that it is consistent with its appearance in poems like “The Clod and the Pebble” and the opening chapters of The Book of Urizen. As elaborated, I’m not sure Howard’s always is. After many years of acquaintance with Blake, I still find afresh, in various personal difficulties, psychological illuminations that are simply amazing. But I think it is wrong to posit that the whole of Blake’s myth expresses a “landscape and architecture of the personality.”

Fortunately, when Howard works with specific passages in the text, the power of Milton usually overwhelms his esthetic, and he talks about the poetry in a way that doesn’t reflect the limitations in his theory. But he does talk about the poetry only, and in the general context of its ideas.

This is a book which might have been written two or three decades ago, before Blake criticism began fully to direct attention to the illuminated books as composite art. It is still possible to focus critically on Blake’s text alone, especially in the lyrics, without at every point in the discussion bringing in the designs, especially when they do little more than illustrate. Or on the designs alone. But in 1976 a full scale critical study of a gorgeous and pregnantly illuminated work of composite art like Milton, even one giving special attention to a theme as this one does, must not ignore the total form in which Blake developed his theme. A reader of this book who knew nothing else about Blake would be quite astonished to discover what kind of work Milton really is.

Though Howard’s study in general follows the pattern of the fall and redemption and hence the overall pattern of the narrative of Milton (with chapters on “The Spiritual World,” “Fall into Selfhood,” “The Blossoming of the Selfhood,” “Regeneration,” “The Journey: Background,” and finally “The Journey”), it is not a seriatim[e] reading or critical commentary on it. It is really a study for someone who already knows the work pretty well and would, I think, be quite confusing to the uninitiated.

A pair of characteristically vigorous articles by Karl Kiralis and John E. Grant, both deriving from papers at the 1975 MLA meeting, consider, respectively, Blake’s illustrations for Milton’s L’Allegro and Il Penseroso and plates 42, 48, 49, and 50 of Milton. The articles are included in a Festschrift for Arthur E. Barker. Kiralis, in “Blake’s Criticism of Milton’s L’Allegro and Il Penseroso and of Its Author” (pp. 46-77 of the volume, with twelve plates), disagrees with other critics in arguing that in these illustrations Blake shows that Milton was still “too indoctrinated by society’s rational forces to the false ideals of the Female Will, especially Deism, and too sexually repressed to search for true experience . . . for Blake yet to hope for Milton’s salvation and consequent prophetic writing” (p. 77). Buttressing the discursive argument is a commentary that reads the meaning of the illustrations—plausibly, I think.

Grant, in “The Female Awakening at the End of Blake’s Milton: A Picture Story with Questions” (pp. 78-99, with three plates), first raises some theoretical “alignments” in relationships between “a poet and a visual artist,” “the writer Milton and the writer and visual artist Blake,” “of Blake as designer of Milton: A Poem and as illustrator of John Milton’s poems,” and “the writer Blake and the visual artist Blake in a poem entitled Milton,” and then goes on to ask a number of suggestive questions about the plates intended to evoke a reading of the sequence of plates that makes coherent sense, as he thinks Blake’s plates do if responsibly examined. The article ends with some briefly suggested answers.