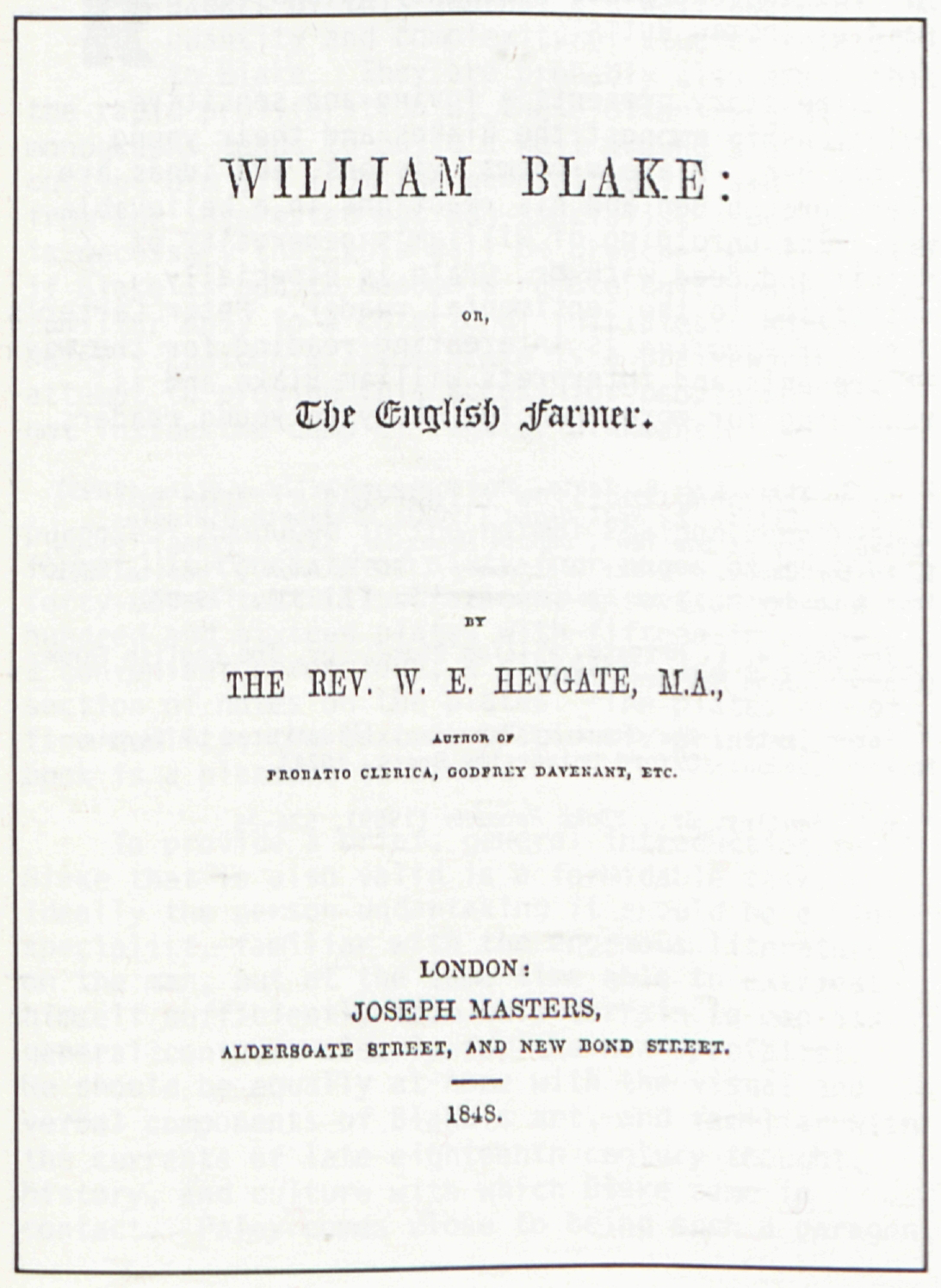 1 Titlepage to Heygate, William Blake.
Only two novels seem to have been written explicitly about William Blake, both listed in the Blake Newsletter of 1975: The Rev. W. E. Heygate, William Blake (London: John Masters, 1848) and Peter Carter, The Gates of Paradise (London: Oxford University Press, 1974). The former is an “improving” book (p. viii) about a feckless young yeoman named William Blake who is turned to God, or at least to conforming Christianity, with the help of a quietly sententious village rector, and it concludes with all well in the Moat House:

It was the reign of rest and peace; that time to which many hearts are looking, a time when the work of life is over, and there is a tarrying and reposing before the break of endless day.
(p. 204) 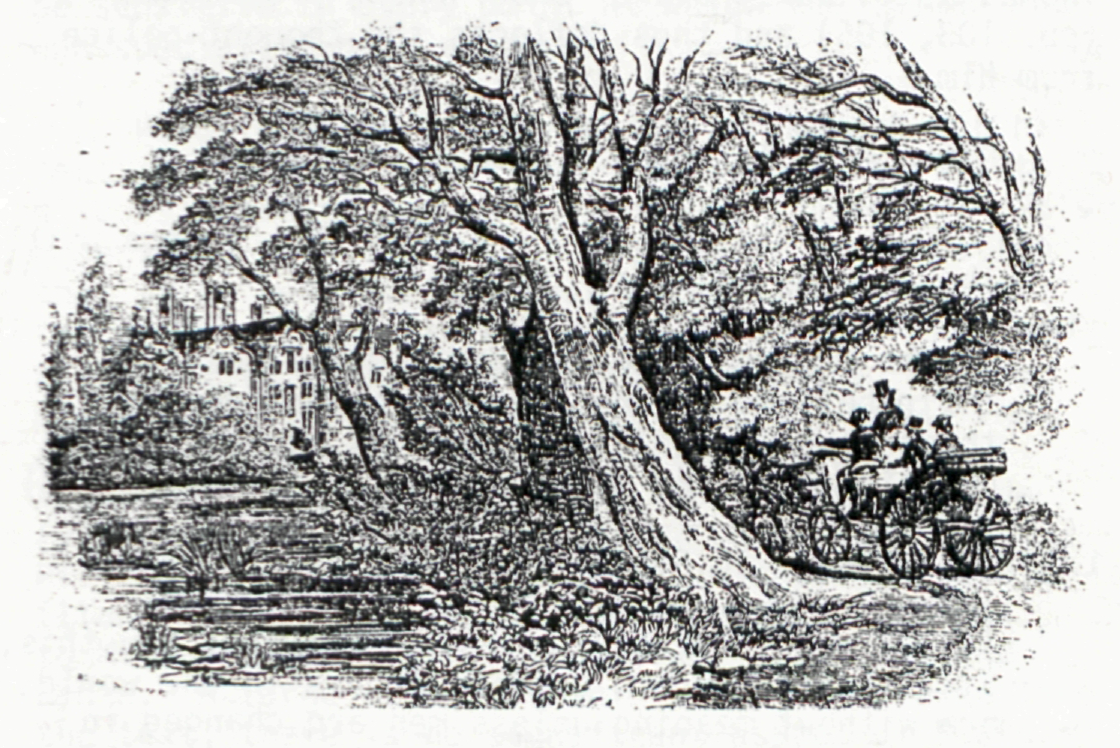 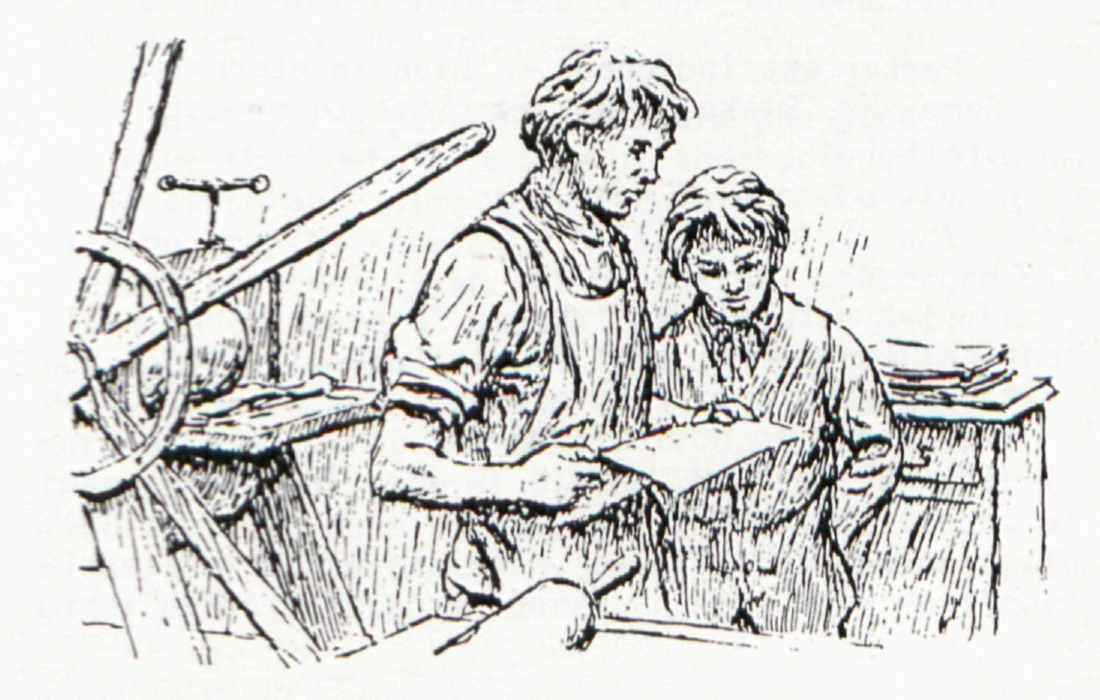 3 Fermin Rocker’s design (one of fourteen in The Gates of Paradise) showing Blake and Ben studying the text of “London” which they have just made on the rolling press in Blake’s work-room in Hercules Buildings, Lambeth.   In the dust jacket illustration, Blake’s hair is shown as fiery red.
begin page 210 | ↑ back to top The subtitle of the novel, “The English Farmer” (omitted in the Blake Newsletter listing), indicates its subject and its irrelevance to the poet-painter.2↤ 2 The Rev. W. E. Heygate, William Blake: or, The English Farmer (London: John Masters, 1848).

The Gates of Paradise,3↤ 3 Peter Carter, The Gates of Paradise, Illustrated by Fermin Rocker (London: Oxford University Press, 1974). on the other hand, does deal with the author of Songs of Innocence and of Experience, and in the Preface Peter Carter notes that “The details concerning Blake, his wife, and his friends are factual. The rest is fiction . . . .”

It’s a good tale, set in 1796 and woven around William and Catherine Blake, a runaway apprentice named Ben Pendrill who needs befriending, and a grubby old man named Grale who spies for a living.

The Blakes actually did assist a young artist, though in different circumstances,4↤ 4 G. E. Bentley, Jr., Blake Records (1969), 524-25. and in Carter’s story the Blakes take in runaway Ben and teach him to read from Songs of Innocence (p. 8), to print (p. 11), to engrave (p. 17 etc.), and Ben helps with Songs of Experience. Some details of the eighteenth-century apprenticeship system are neatly worked in with Ben, who becomes an apprentice engraver.

We meet members of the real world of William Blake, including Mr. Godwin, Miss Wollstonecraft, Mr. Parker, Mr. Stothard, Mr. Moser (d. 1783), and especially Mr. Flaxman and Mr. Butts. With the assistance of John Flaxman, “Muster-Master General” Thomas Butts takes Blake “under [his] protection” (pp. 103, 105) and thus deflects the thought-police from him.

Often the dialogue is plausibly Blakean:

‘Do you still attend that church, the one with the strange beliefs?’ Godwin asked.

‘The Church of Swedenborg? Occasionally. Their beliefs are not strange enough for us these days.’ William’s face was expressionless but his voice was light, almost mocking. (p. 13)

‘ . . . you speak of the new age; I tell you this, Sir, these changes, and any others in the world, are without meaning unless men are changed in their hearts and learn to live in eternity.’

Parker was indignant. ‘Live in eternity? Come, Mr. Blake. This is close to priest-craft.’

‘Those words do not frighten me,’ William said. ‘We hear too much of priest-craft in these days. Let us hear a little more of soldier-craft, or business-craft, or politician-craft. I tell you that all ages are the same, but that genius is above the age.’ (p. 47)

The story is, of course, about a boy, and Carter often sketches the relationship of Blake and Ben deftly. When Ben first arrives, Blake shows him a woodcut:

He took an inked roller and ran it over the wood. Then he placed a strip of paper over the wood and pressed it down. When he took the paper away there was an animal on it.

Ben whistled in surprise. ‘It’s a dog,’ he said.

William was slightly offended. ‘It’s a lamb,’ he said. ‘Do you know what a lamb is?’

At the end, Mr. Grale the spy, abandoned by his secret police paymaster and left to his rather horrible self, is taken in by the Blakes, to Ben’s astonishment, and Ben himself is apprenticed to Mr. Fox the engraver, his sixty-guinea fee being paid by Thomas Butts.

The story presents a loving and sensitive relationship amongst the Blakes and their young friend Ben. Blake’s poems, visions, and ideas are seen through Ben and his reactions in a believable way. The unfolding of William’s generosity of spirit and deed with Mr. Grale is especially satisfying to the sentimental reader. Peter Carter’s Gates of Paradise is interesting reading for the way it presents and interprets William Blake and is rewarding for more than the story to young readers.