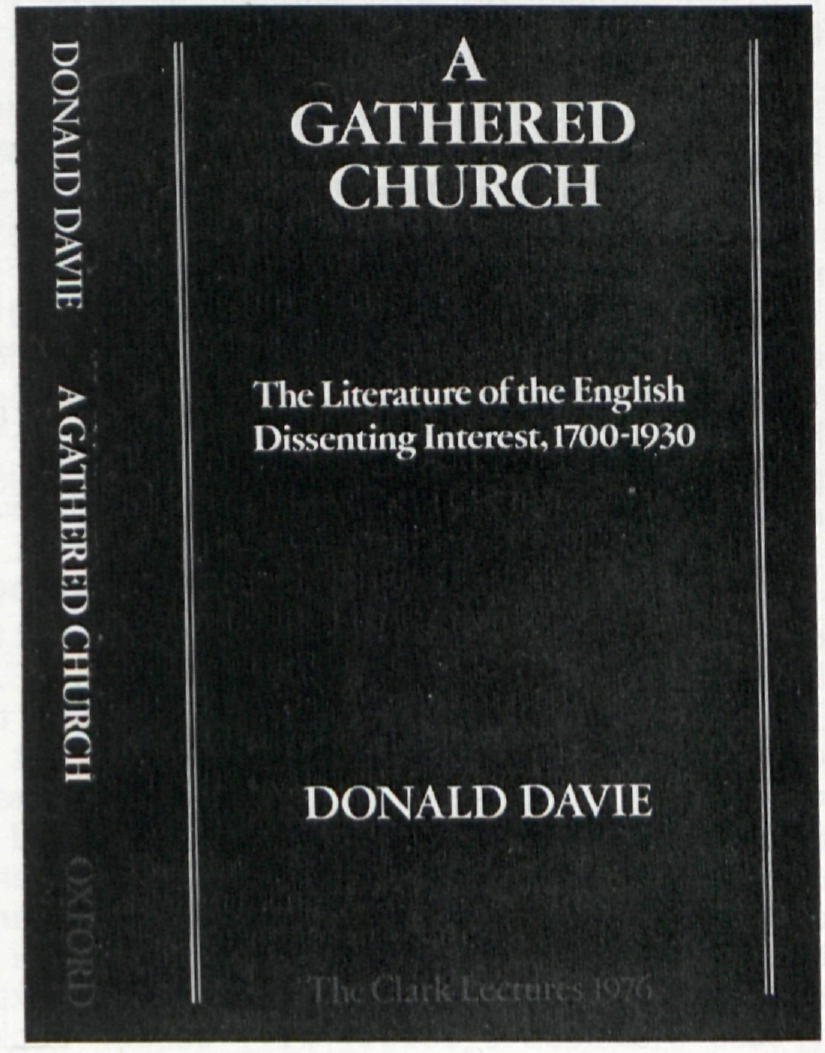 This book contains the six Clark Lectures delivered at Cambridge University in 1976, with thirty-five pages of notes and eleven photographs of architecture and memorials illuminating the points at issue. The first lecture charts the field. From Milton to the present, the writer searches for evidences of culture as these have changed. Primary consideration is given to esthetic patterns, proclivities and values. Two other questions are never far from the mind: political groupings and patterns of behavior; and religious groupings, beliefs and patterns of worship. At the close of the last lecture Mr. Davie remarks: “Some day I may stray from my proper field so far as to challenge certain received notions about the social and political history of the English Dissent over the past three centuries.” These fields also are at least foreshadowed in the present publication.

Isaac Watts is the central figure of the second lecture, “Old Dissent, 1700-1740.” Two lines of relationship are traced, between the work of Watts and Calvinist ideals of art on the Continent, those artistic ideals of simplicity, sobriety, and measure, manifested in Watts’s ability to subordinate parts to the whole conception in a form of classicism so different from that of Pope that the speaker calls it “non-English.” The other relation is to Hebrew poetry. Because the Old Dissent thought of itself as a chosen people living in tension with neighbors, Watts was “a poet of the tribal lay, a true analogue in Augustan England of David.”

“Dissent and the Wesleyans, 1740-1800” first considers the lapsed Quaker, Matthew Green, whose poem The Spleen comments with rueful wit upon the changes from the time of George Fox to the day when the Quakers entered into the Industrial Revolution. The Spleen was admired by Pope and Walpole and Gray; admired also by Johnson as wit, but not as poetry, and he did not include Green in the Lives of the Poets. But Johnson would not omit Isaac Watts; he said nothing about the hymns (Johnson did not approve of hymns), and little about Watts as a poet, but praised him as man, as prose writer and especially as teacher. Watts and the Wesleys are the central figures, not that the Wesleys dissented from the Church, but because their followers did. The questions of “offensive” sexuality and masochism are raised here, and one is reminded that the dignified and decorous Dr. Watts was accused of such faults, as well as the extravagant Moravians.

The “Old Dissent” is represented by Robert Hall, Baptist minister, in the fourth lecture, “Dissent and the Evangelicals, 1800-1850.” Hall, because dissenters could not be members of the University, was not quite “every inch a Cambridge man,” but his love of Cambridge, and of scholarship, and of his friend Samuel Parr almost qualify him for that description. The New Dissent, Unitarians and Sandemanians, has Mrs. Elizabeth Gaskell for the Unitarian representative. The Unitarians, the intellectual élite of the Dissent, contributed to culture ideas, argument, speculative thought rather than works of art, and Mrs. Gaskell with her novels “is probably the nearest we can come to an exception to this rule.” The Sandemanians are represented by the great scientist Michael Faraday. His popular lectures on science were a major source of income for the Royal Institute, and his love of the theater and novels and poetry enlivened these lectures, eloquent and energetic in style. The style of his sermons (he was an elected Elder) contrasts with the lectures, being “patient and formal exposition.” He had been too poor to have any academic training. He had educated himself from The Improvement of the Mind by Watts and his first publication was on that book. Faraday alone would go far to justify Johnson’s praise of Watts’s book; and as for Watts, it should begin page 216 | ↑ back to top be glory enough for any teacher to have educated Faraday—even, or perhaps especially—posthumously.

Lecture V, “Dissent and the Agnostics, 1850-1900,” tells of the “loss of faith,” in particular, George Eliot and Leslie Stephen. Many arguments with the two Arnolds, father and son, are brought into the discussion. Chiefly considered is their allegation that the Dissent had abandoned all cultural responsibilities. “Mark Rutherford” is compared with André Gide in a very illuminating discussion. The villain of this lecture is the evangelist Charles Spurgeon, whose effect upon the Dissent was “disastrous.”

The sixth lecture, “Dissent in the Present Century,” takes D. H. Lawrence as its battleground, the opponents being T. S. Eliot against F. R. Leavis. Eliot held in contempt Lawrence’s Chapel background; Leavis defended it on the grounds that it was “the center of a strong social life.” It seems to Mr. Davie, for all that, that this background failed Lawrence, just as the background of Dissent failed to sustain W. H. White. But the tradition did not wholly fail Edmund Gosse. Father and Son demonstrates this fact, and “one of the great and unexpected virtues of Gosse’s beautifully tender book is the proof it gives of how a culture and a tradition were transmitted even within a sect so late-come and so rigid as that of the Plymouth Brethren.”

If I were competent to do so, I should set this book beside the work of another poet and critic, Matthew Arnold. I am not. I have given a rather drab summary, which stands in relation to the book itself as a précis of a libretto stands in relation to its musical drama. Only major characters and plot line. But I can at least mention the music.

From the printed page there comes the sound of a voice, luminous and just. The thematic construction takes its ground bass from the heroic age of Milton and Bunyan. The action begins when the Hanoverians made the Dissent a part of the bourgeois culture. One major theme is stated in “O God, our help in ages past,” the need of Establishment and Dissent for one another; the song is used in Establishment ceremonies in England, Canada and America. Another song by Watts introduces a major theme, “We are a garden.” It is part of Watts’s only song cycle, made from The Song of Solomon, and as that book has virtually been removed from the canon, so are Watts’s songs almost unknown. The charge of “offensive sexuality” is part of the theme, and another part is the celebration of the Lord’s Supper. This particular song describes the careful and loving preparation for the sacrament and the invitation to the Spirit to come, now that all has been made ready. With the song come thoughts of a real garden where Watts was a guest for more than thirty years, a decorous eighteenth-century garden. Here he walked and sang with the Wesleys, and said that one song by Charles Wesley was worth more than all of his own. And so this song is next quoted, “Wrestling Jacob,” on the great paradoxes involved in the wounding of God and Man, of victory in defeat.

Thus the eloquent tongue of Mr. Davie evokes the very times as they pass in historical succession. Sometimes that tongue is in his cheek. The lecture on the late nineteenth century opens (appropriately) with something like a Gilbert and Sullivan patter song on the divisions among the Baptists. A Gathered Church, indeed! Sectarianism with a vengeance! And, appropriate to that era, The Importance of Being Earnest comes to mind; Froude and Stephen sound rather like Lady Bracknell. Sacred poetry and religious fictions have no place in literature at all. Ah, so? Well, that disposes of Milton and Bunyan. Bunyan, in fact, is “the Poet-apostle of the English Middle-Class imperfectly educated like himself.” How delightful to contemplate the perfection of one’s own education, and, of course, one’s two good addresses.

In the lecture, a poem by Tyutchev sounds with grief for loss, the loss of faith, the loss of belief in the efficacy of prayer. The lecture closes in contrasting tone, Samuel Butler’s satiric celebration of Charles Spurgeon in his flamboyant vulgarity; and in the satire there is still the sound of grief for something lost.

I take issue with two statements about Blake. I am reluctant to do so for readers who may not have Mr. Davie’s book at hand, for his tone is quite as important as I represent it to be, and in both cases, it is the tone I dispute, not the facts stated. My ears are notoriously better than the brain between them; but they may not be infallible. Of Blake’s Mystery, he says: “this term that the prayer book gives to the sacrament is consistently a term of abuse” (p. 98). So far as I recall, that is true. But Blake was not working from the prayer book. His most celebrated Mystery is from Revelation, used at the close of Jerusalem as St. John used it, an evil female. The Tree of Mystery is associated with the sacrament in The Four Zoas (Night VII, p. 80). Urizen compels his exhausted daughters to knead the fruit of the Tree into bread for a parody of a communion service and preaches a “communion sermon” that should have brought down upon him the “Woes” of Matthew 23 and the special “Woes” in 1 Corinthians 11:27 & 29. Blake, for about ten years, from 1795 was bitter in his comments on an Establishment that used its authority to support wars. And, in another context, Mr. Davie himself gives proof that the “daughters” were reluctant to take part in the sacrament: in St. Paul’s Cathedral, Easter 1800, there were six communicants (p. 64).

It is true (p. 52) that Blake found no sustenance in any organized religion. His Mr. Huffcap could stand in for Spurgeon with his vulgar ranting. But Blake saw no good in any other sort of organization, school, art academy, nothing suited him. During a time when London’s organized charities drew praise from the Continent, Blake had no part in them, and even “Holy Thursday” has been interpreted as an expression of his contempt for such works. Hogarth, quite a different sort of man, opened London’s first art gallery in support of that charity and served with Handel on the board. Yet Blake apparently was not uncharitable by nature, nor does all of this add up to Blake’s holding in contempt the true Bread and Wine that images the broken body and spilt blood. Lord David Cecil’s life of Samuel Palmer describes that group of young men who made Blake’s last years begin page 217 | ↑ back to top happy. They were devout, intellectually sophisticated to various degrees, able to construe Blake’s poems and his pictures, two of them artists, one of the two a great artist. They accepted Blake’s special relation with Milton, and they established his special relation with Bunyan. They met at The House of the Interpreter. I am content to rest on their opinion.

I am not in agreement with another of Mr. Davie’s opinions. The whole long passage (p. 53 f.) is relevant. The gist is that one may admire Blake “and still regard with alarm, as a very ominous symptom, the veneration which is now so freely accorded him.” Mr. Davie spoke in 1976. For some years prior to that date, I had cause to think quite the contrary. I was living in a chancy and fascinating era in the history of education, every newspaper announcing some lower level of literacy and some higher estimate of the number of hours out of twentyfour that my students spent watching television commercials. The spontaneous interest of students in Blake was like money in the bank. Blake is, as Mr. Davie says, an “engaging” creature. Engaging is precisely the word. Think of how many things Blake was interested in! Think of the avenues he can open! Art, and his pictures of Chaucer and Spenser. Milton. Blake can lead students happily to concordances, analytical grammar, scholarly opinions. If Blake were nothing more than a means to an end, I should owe him much. But to me Blake is more, and perhaps I am particeps criminis.