ECHOES OF BLAKE’S GRAVE DESIGNS IN 1838

The fame and influence of Blake’s designs to Blair’s Grave (1808) are indicated in a modest way in The Pictorial Edition of The Book of Common Prayer [1838],1↤ 1 THE / PICTORIAL EDITION / OF / THE BOOK / OF / COMMON PRAYER, / ACCORDING TO THE USE OF THE / United Church of England and Ireland /TOGETHER WITH / THE FORM AND MANNER OF MAKING, ORDAINING, / AND CONSECRATING / OF / BISHOPS, PRIESTS, AND DEACONS. / ILLUSTRATED WITH / MANY HUNDRED WOOD-CUTS. / TO WHICH ARE ADDED, / ORIGINAL NOTES, / AND AN / INTRODUCTORY HISTORY OF THE LITURGY. / BY THE / REV. HENRY STEBBING, M.A., / MINISTER OF ST. JAMES’S EPISCOPAL CHAPEL, HAMPSTEAD ROAD. /-/ LONDON: / C. KNIGHT & CO. 22 LUDGATE STREET [?1838]. Quarto: a-e4 B-4X4, pp. [i]-x1, 1-[712] The engravings are attributed, without evidence, to John Jackson (1801-48) by Percy Muir, Victorian Illustrated Books (1971), who also reproduces the larger of the two plates discussed here, implying that it is an “original design.” John Jackson thought well enough of Blake to write an account of him in Jackson [& William A. Chatto], A Treatise on Wood Engraving, Historical and Practical (1839), 715-17. and to reproduce as a frontispiece to the edition of 1861 (reprinted Detroit, 1969) the Blake design of “Death’s Door” for Blair’s Grave engraved by W. J. Linton. This plate had previously appeared to illustrate Anon., “Death and Immortality,” Illustrated Exhibitor and Magazine of Art, 1 (12 June 1852), 369-71, and ibid., The Ladies’ Drawing Room Book (N.Y. [1852]), pp. 15-16—a proof is in The British Museum Print Room. Linton later made the facsimile illustrations for Gilchrist’s Life of William Blake, “Pictor Ignotus” (1863) and used the design from Blake’s Europe (1794) pl. 12 for his own Famine: A Masque (Hamden, Connecticut: [Linton’s own] Appledore Press [?1887]) (reproduced in F. B. Smith, A Radical Artisan: William James Linton 1812-97 [1973] at p. 150), perhaps originally made for Gilchrist though not used there (Smith p. 197). generously pointed out to me by my colleague Professor Peter Morgan. The work is remarkable for over 750 small woodcuts, mostly vignette capitals and rather larger chapter headings. The engravings are anonymous, but the authorship of most of the designs is attributed in the “List of Illustrations” to artists such as Raffaelle, Rubens, Tintoretto, and Lebrun, with a scattering of more recent designers such as Reynolds, Westall, and Flaxman (eight designs, chiefly from his Lord’s Prayer [1835] ). The only Blake in the “List” is on p. 192: “Initial letter—Christ with the keys of Hell and Death.—Blake” (3.5 × 4.0 cm). The design (illus. 1 here) is made so small and conventional as to be scarcely recognizable as Blake’s for the plate called “Christ descending into the Grave” (see illus. 2); the focus on Christ is diminished, the facial features are made simpler and conventional, and the distracting horizontal and diagonal lines of the capital “A” entirely alter the force of Blake’s design. 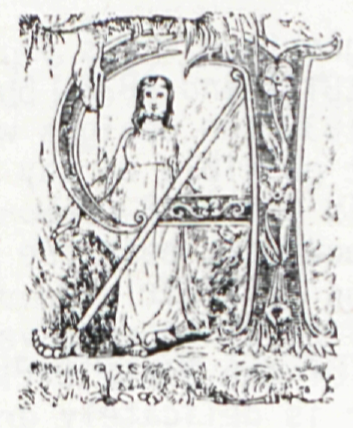 Far more interesting is the border to the design of Rubens’ “Resurrection” (illus. 3) serving as the headpiece to “The Collect” on p. 199 (11.0 × 13.7 cm). The border is not identified in the “List of Illustrations,” but it is unmistakably taken from the engraved titlepage to Blair’s Grave (illus. 4) and the design of “The Death of The Good Old Man” (illus. 5) for Blair’s Grave. At the bottom of the border is the skeleton faithfully copied (reversed) from the Blair titlepage. To the right is the plunging trumpeter from the Blair titlepage, with clouds added at the bottom and some trailing drapery obscuring his genitals. (The hands and feet are somewhat altered from Blake.) At the left is the same figure, reversed, with some added background clouds and the tactful omission of the genitals. At the top are the two angels conducting the soul of The Good Old Man to heaven, fairly carefully repeated, reversed, from “The Death of The Good Old Man” (illus. 2 “Christ descending into the Grave” designed by Blake for Blair’s Grave (1808) engraved by Schiavonetti.
[View this object in the William Blake Archive]
5). All together, the border seems to show the angels of the Last Judgment, at The Resurrection of Christ, trumpeting to the skeleton rising at their call at the bottom, and at the top we see two other angels (or perhaps the same ones having sprouted wings) carrying a man (the resurrected and newly fleshed and bearded skeleton?) to heaven. The method begin page 208 | ↑ back to top 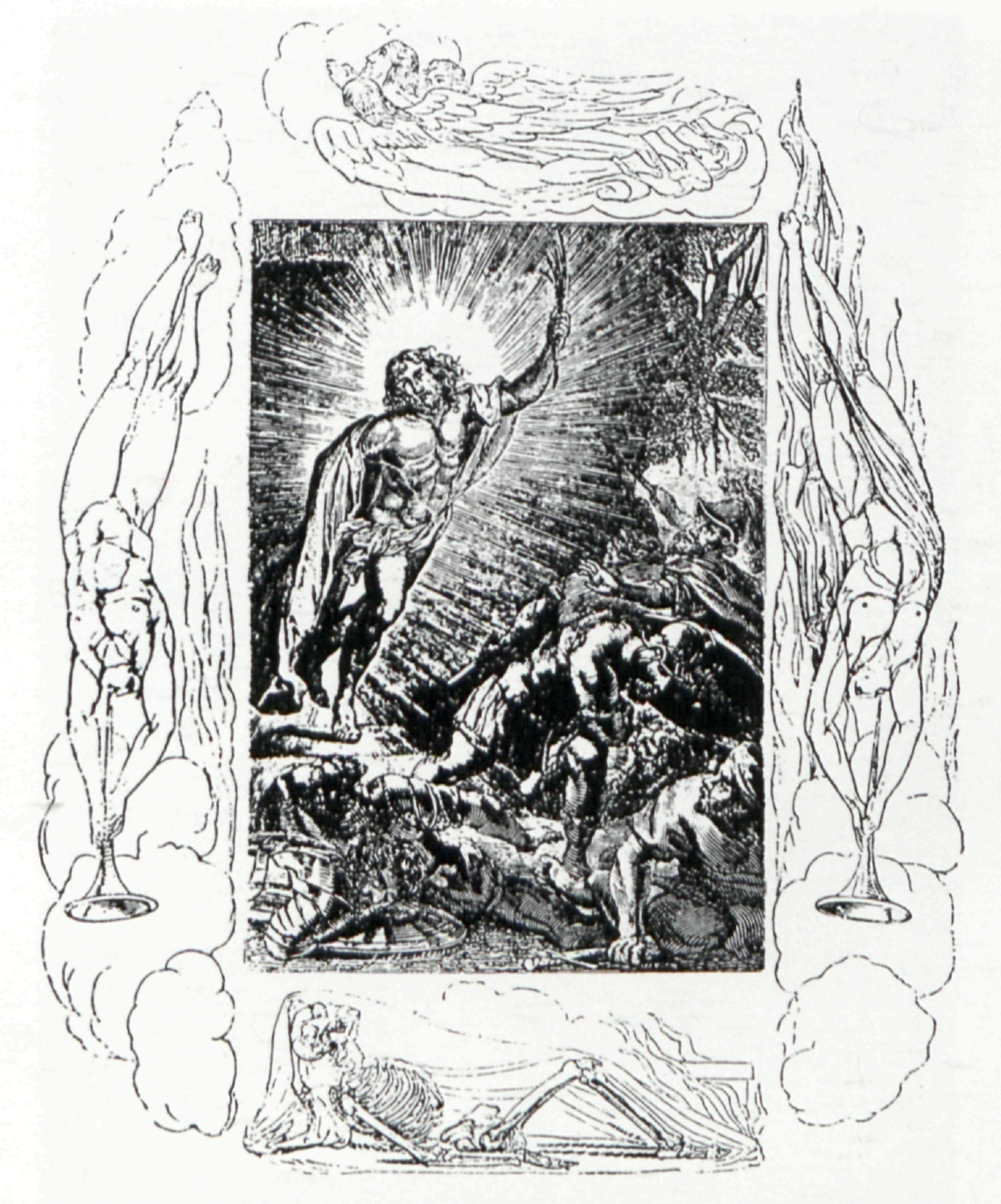 3 Chapter heading from Rubens’ “Resurrection” from Pictorial Edition of The Book of Common Prayer [?1838], p. 199. 5 Blake’s design for “The Death of The Good Old Man” for Blair’s Grave (1808) engraved by Schiavonetti.
[View this object in the William Blake Archive]
and intention are not Blake’s, but they are not entirely inconsistent with his either.

Blake’s designs to Blair’s Grave were printed in 1808 (twice), 1813, and 1826, but since in all printings before 1830 the designs were scarcely altered, it is not possible to say which edition was being copied in the 1838 Common Prayer. The 1838 borders do, however, bear one striking similarity to the new editions of Blair’s Grave of 1847 and 1858 with new plates after Blake engraved by A. L. Dick. In Dick’s version of the Blair titlepage, the plunging trumpeter is delicately draped with a wisp of unattached diaphanous[e] veil, as in the 1838 design. James Montgomery, who subscribed to the 1808 edition of Blair’s Grave, found that “several of the plates were hardly of such a nature as to render the book proper to lie on a parlour table for general inspection,” and Robert Hunt complained in The Examiner for 7 August 1808 that “an appearance of libidinousness [in the Blair designs] intrudes itself upon the holiness of our thoughts.”2↤ 2 Blake Records (1969), 194, 197. Regency and Victorian sensibility evidently required changes in Blake’s vision, and in the 1838, 1847, and 1858 versions of Blake’s titlepage for Blair’s Grave the trumpeter seems to have stooped to truth and moralized his song.