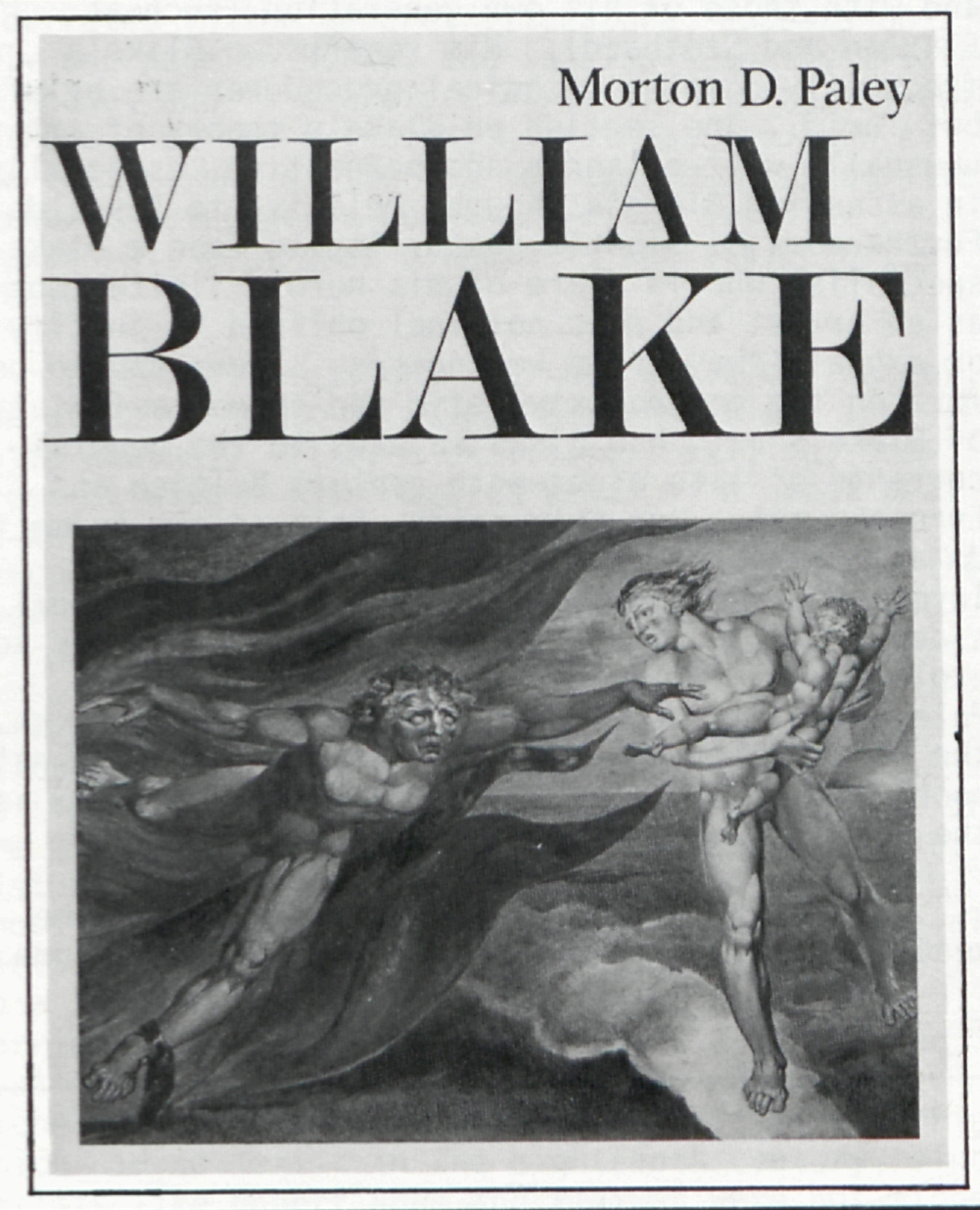 Readers of this journal are well aware of the quantity and complexity of studies related to Blake. They are probably also aware that the rapid proliferation of these often recondite monographs tends to build a wall around Blake, cutting him off from the general public and even from the interested but non-specialist student. It is necessary that this wall be breached periodically if Blake is not to become a remote cult image, familiar only to a coterie of initiates. Morton Paley’s Phaidon William Blake is a praiseworthy attempt to provide this access for people who are not inside the camp of regular Blakeans.

The book is physically well-designed for its purpose. Produced in the normal Phaidon monograph format, it consists of sixty-four pages of text with forty-seven text illustrations; a section of one hundred and sixteen plates with fifteen in color; a convenient chronology; a glossary; and a separate section of notes on the plates. The plates are of fine quality; the text is spaciously printed; the book is a pleasure to handle.

To provide a brief, general introduction to Blake that is also valid is a formidable task. Ideally the person undertaking it should be a Blake specialist, familiar with the enormous literature on the man, but at the same time able to extricate himself sufficiently from this terrain to map its general contours clearly for the non-specialist. He should be equally at home with the visual and verbal components of Blake’s art, and familiar with the currents of late eighteenth century thought, history, and culture with which Blake came in contact. Paley comes close to being such a paragon, although he is perhaps too much the specialist to be sensitive to every point at which the layman and non-specialist need guidance.

Paley chooses a biographical framework for his text, but allows himself sufficient flexibility to discuss coherent topics within that framework. It’s a sensible solution to the problem of organization that works well for the task at hand. There are ten sections: (1) Blake’s early life, training, and work down to 1790. (2) The Lambeth books, to the mid-1790s (this is the longest section). (3) The color-printed monotypes, and illustrations to Night Thoughts and Gray. (4) The Felpham episode. (5) Return to London, The Grave, Canterbury Pilgrims. (6) Blake’s thoughts on art. (7) Bible illustrations. (8) Milton and the illustrations to Milton’s poems. (9) Jerusalem. (10) Job and Dante. A large amount of information is packed into the text; there is no significant aspect of Blake’s work of potential interest to the non-specialist that is not touched on.

Ideally the person to measure the success of the book should be a member of the audience to whom it is presumably directed, the interested layman with no special knowledge of Blake or his art. The present reviewer is an art historian, concerned with Blake in the general context of Georgian art, but not a Blake specialist. I find it interesting that Paley, who is an historian of literature, gives more of his text to an explication of the visual than the verbal side of Blake. He provides what I find a clear, consistently well-informed account of Blake’s artistic training, of his affiliations with older artists (such as Barry, Fuseli, and Mortimer) begin page 212 | ↑ back to top and with those of his own generation (such as Flaxman and Stothard). His remarks on Blake’s frequently complex technical procedures are brief but lucid. The section on Blake’s theory of art is unusually well-balanced and perceptive, especially in assessing Blake’s thought relative to Reynolds’s. Furthermore, I find it reasurring to read a Blake specialist who is aware of his hero’s limitations as an artist and does not feel obliged to justify or explain away these weaknesses. There should be more on the general stylistic and formal affiliations of Blake’s art, how Blake relates to the general currents of late eighteenth century British and European art. But this aside, Paley seems to me to do an admirable job of telling the interested layman what he will want to know about the visual side of Blake. The bulk of the text is devoted to explanations of individual plates and designs. Paley also demonstrates the various ways in which the visual and verbal interrelate in the illuminated books, choosing a series of plates from America as the primary vehicle for this purpose.

I did not find a comparable overview of the verbal component of Blake. Paley seems to assume a much broader knowledge of late eighteenth century British poetry in general and of Blake’s poetry in particular than he does for the visual side. Nor did I find any general assessment of Blake’s intellectual position relative to his contemporaries. The text is richly sprinkled with penetrating remarks on both these matters. But they nearly all deal with particulars—the interpretation of an individual page or verse. There are illuminating paragraphs on Blake’s relations with the Swedenborgians. There is nearly always a helpful sentence or two about the theme of a particular poem. But the interested layman looking for guidelines in approaching the verbal component of Blake’s art will find less than for the visual. Obviously Paley is well qualified to supply this information. That it is not there may be the result of unconscious assumptions concerning the audience for the book. Or perhaps the expected audience is students of literature already familiar with the verbal side of Blake, seeking a guide to the visual. I think the book meets admirably the needs of this last group, but is not yet the ideal answer for those unfortunates totally beyond the pale.