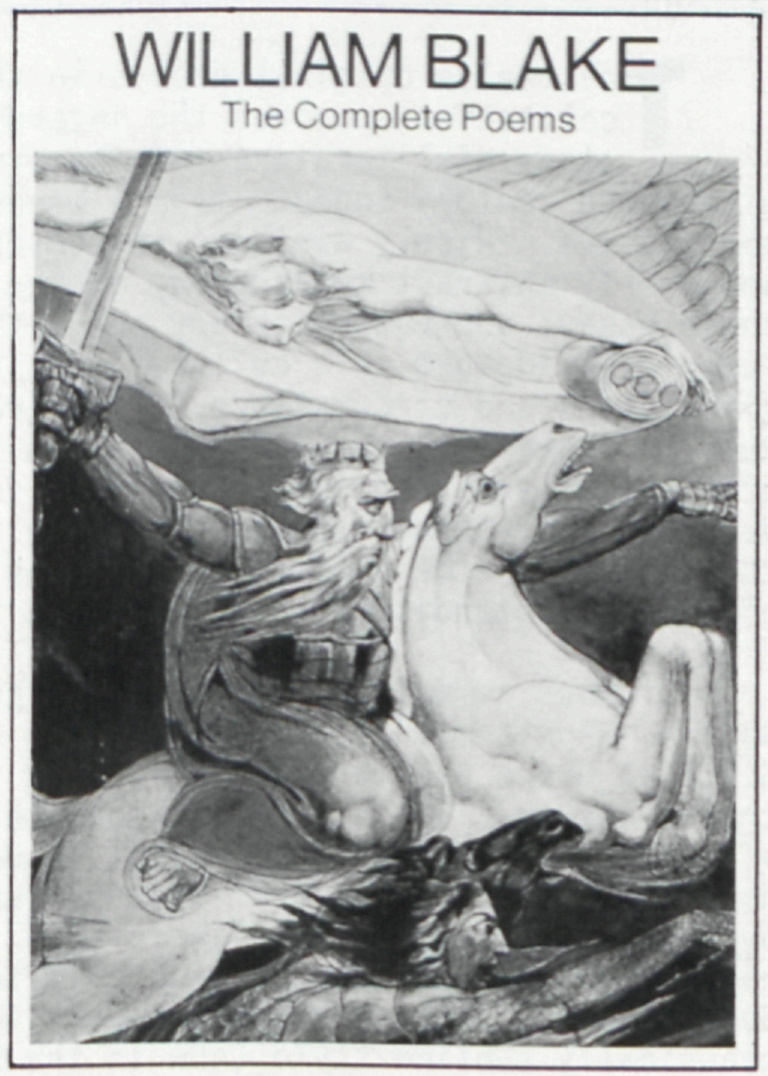 This new edition of Blake’s poems seems attractive enough until one starts making the inevitable comparisons to older editions—comparisons which become especially pointed in this case because in paperback Ostriker’s text will sell for the same price ($7.95) as the Erdman and Keynes editions. It is easier to repeat the cry of a mistaken soul—“More! More!”—than it must be to prepare a new edition of Blake in an inflationary economy. Still, the main defect of the new text is simply that the old ones offer more for the money: more of Blake (K includes all of the prose, E all except for some of the letters), more textual commentary, and more paper (the 7″ × 4-⅓″ leaves of the new text are rather cramped and make the volume itself, at 1071 pages, somewhat unwieldy).

The new edition forms part of the Penguin English Poets series, and it is in accordance with the general policy of that series that all of Blake’s poetry and none of his prose has been included. Often the distinction itself does not suit Blake begin page 269 | ↑ back to top very well. An Island in the Moon, for instance, loses most of its charm and all of whatever unity it can be said to possess when Ostriker prints only the songs, sometimes leaving a few shreds of prose attached. Likewise, some of the epigrams and satiric verses which Blake wrote in the Annotations to Reynolds and other prose works seem pointless and obscure once separated from their contexts. The same complaint could be made against[e] W. H. Stevenson’s annotated edition of Blake (The Poems of William Blake, London: Longman, 1971; New York: Norton, 1972)—another Complete Poems which forms part of a series—though Stevenson gives larger prose fragments from An Island in the Moon. Luckily both editions incorporate all of The Marriage of Heaven and Hell, rather than trying to define and extract poetic “parts”; and Ostriker (unlike Stevenson) even manages to smuggle in There is No Natural Religion and All Religions are One.

But there are other reasons for questioning the appropriateness of a Complete Poems in Blake’s case. Blake’s prose is slight in volume but large in its significance to the study of his thought and his symbolic system, and if a complete edition is out of the question, the needs of the classroom are probably better served by a text which excludes some poetry in order to admit some prose. In this respect Ostriker’s edition might be compared to Hazard Adams’s Rinehart edition (William Blake: Jerusalem, Selected Poems and Prose, New York, 1970), a selected text priced at $4.95 which gives both The Four Zoas and Milton in excerpted form but manages, in 170 pages, to provide generous samplings from every category of Blake’s prose. More to the point, the Penguin edition might simply have added a section of prose without cutting anything; such a feature would increase the value of the book more than it increased the price.

So far there exists no major edition of Blake’s writings which gives anything approaching adequate representation to his visual art, and Ostriker’s text will not change this situation. Except for the handsome cover, a color reproduction of a detail from “Death on a Pale Horse,” the new edition contains no illustrations of any kind—this, once again, due to the general policies of the Penguin series. K is likewise devoid of illustrations; E gives a slightly better sense of Blake’s “composite art” by offering several reproductions; Stevenson includes some reproductions, and very usefully indicates the positions of designs in the illuminated books by printing “Design” in brackets. But I would not think it very difficult or prohibitively expensive for any of these editions to include photographic sections of, say, twenty pages, a feature which might have considerable suggestive value; if Penguin had been the first to take the step it would have a more competitive volume than it has now.

Like Keynes and Stevenson, Ostriker gives Blake’s poems in a simple chronological sequence (or in the best approach to one that is possible), an arrangement which has the obvious value of illustrating Blake’s development as a poet. The alternatives here would be to observe generic or textual distinctions, separating the shorter poems from the prophecies (as in the Adams edition) or the “published” works from the manuscript poems. E offers a complex and largely unchronological arrangement of the poetry, one which consolidates and gives particular emphasis to the illuminated works which supposedly comprise Blake’s “major canon” (p. xxiii). One can argue for or against any of these procedures. Erdman’s groupings are often useful, but they are also rather confusing, and I balk at any definition of the “major canon” which excludes The Four Zoas. It is a little awkward to have Milton and Jerusalem separated by miscellaneous verses and epigrams in Ostriker’s text, or by a congeries of poetry and prose in K, but is also useful. To have the prose separated from the poetry and consolidated into relevant categories (as in E and the Adams edition) is convenient, but then of course one loses track of chronological relationships.

Ostriker follows Keynes in her presentation of Blake’s manuscript poems, making a considered decision to include variant passages as part of the main text:

For poems which exist only in manuscript form, this material is incorporated in the text through italics and brackets, reproducing as far as possible the condition of the texts in their ‘workshop’ state, with successive stages of revision evident as one reads along. The assumption here is that unfinished poems should not be presented to the eye as if they were finished, and vice versa; and that the reader will benefit from an opportunity to sense Blake’s verse both as working process and as completed product. (p. 8)

The Four Zoas is the work chiefly affected by this procedure, and many modern commentaries have indeed approached that poem primarily “as working process,” scrutinizing Blake’s revisions and tracing relationships between early and late “layers” of the manuscript. Ostriker’s arrangement may be pleasing to teachers who wish to take a similar approach in the classroom; for my own part I do not like to see The Four Zoas treated in this way. The commentaries I speak of too often seem to practice a reverse hermeneutics, expounding the poem’s disunities at the expense of the unity and the aesthetic success which it has largely achieved. Likewise, a text which incorporates variants inevitably does so at the expense of “the completed product”—or of a product which is at least more complete than such a text suggests. It may be a distortion to present the poem “as if it were finished,” but is a greater distortion to resurrect, even in italics and brackets, passages which Blake himself deleted; this is to do the poet’s “unfinishing” for him.

In any case, Ostriker’s text can hardly be said to “make successive stages of revision evident” in The Four Zoas. Most variants make their way into the text simply because they happen to have been decipherable despite Blake’s attempts to delete them—not because they all belong to the same date or represent anything like a coherent stage in the composition of the poem. It is rare that the begin page 270 | ↑ back to top inclusion of such fragments clearly depicts the growth even of a single passage, much less of the poem as a whole. Major waves of revision are often completely unaffected by the Keynes-Ostriker procedure, for to distinguish a main text from variants is not nearly the same thing as distinguishing early or “original” passages from later ones. Thus, for instance, the lengthy late additions in VIIa and VIII which develop the roles of Los, the Spectre, and Enitharmon—and in so doing shift the poem’s center of gravity and perhaps cause the VIIa-VIIb problem—are in Ostriker’s text indistinguishable from earlier material. Now this is as it should be in such an edition, for a text which (like Bentley’s transcript in the facsimile volume) consistently distinguishes the various “layers” of the manuscript becomes almost unreadable. But when major revisions must remain hidden, what is the point of dramatizing minor ones?

Ostriker’s notes are virtually devoid of textual information, and this makes her treatment of the manuscript poems all the more questionable; Keynes, by contrast, supplies copious annotations which give the reader a chance to understand what he is really seeing in the italics and brackets. But I would like to see the “workshop” approach abandoned altogether, in both editions, for on the whole its effect is simply to make The Four Zoas seem more confused than it really is. Let the variants be left in the notes, as in E.

Overall, the “apparatus” in the new edition is less useful than that in E owing to its lack of textual information; but in proportion to their length, Ostriker’s interpretive notes seem to me as good as any I have seen. They concentrate on tracing relevant allusions, on cross-referencing Blake’s endlessly self-interpretive canon, and on providing the kind of basic explanations of the symbolism which most readers need and most scholars would find reasonable. The notes to Jerusalem in particular contain many adroit and compact glosses of difficult material, and they introduce the poem quite well. It is impossible, of course, to annotate a text without bringing in some kind of bias; still, Ostriker’s notes are attractive for their balance, simplicity, and scholarly reserve. In these respects they present a favorable contrast to Harold Bloom’s “Commentary” in E, a critical discussion of great value which nevertheless seems a bit too “exuberant” and partial to serve in the place of judicious annotation. Keynes is as silent on interpretive matters as Ostriker is on textual ones, so her notes will be more useful in most classrooms; they do not quite come up to the standard set by Stevenson’s extraordinarily detailed annotations in the Longman edition, but that text is not available in paper and sells for $14.95 in hardback.

Ostriker gives a brief Preface but no Introduction, and this is unfortunate, for there is a gap here that needs filling. In all the major collections the task of explaining Blake’s symbolism is left almost entirely to the notes, which by their nature afford only local and fragmentary insights. What the general reader needs is a coherent and systematic introduction which summarizes Blake’s politics, his religious views, his epistemology, his theory of symbolism, and his vision of the structure of the psyche, and which then tries to explain just why he wrote as he did in the prophecies. How much of this one could really accomplish in a short space is debatable, but the attempt ought to be made. Somewhat curiously, the best models for such an introduction are now found in two selected texts, the Adams collection and Frye’s Selected Poetry and Prose of William Blake (New York: Modern Library, 1953), the latter a modest anthology which conceivably remains in print chiefly on the strength of its Introduction.

The unique complexity and difficulty of Blake’s art will doubtless continue for some time to defy all attempts to create an Ideal Edition—an edition which includes all of Blake’s writing, doesn’t cost too much, and satisfies all of the diverse claims of the manuscripts, the visual art, and “the system.” Meanwhile a less-than-ideal edition has various opportunities to define a scholarly or an economic niche for itself, but Ostriker’s text has missed too many of these opportunities; it does not seem a really needed or peculiarly useful edition.