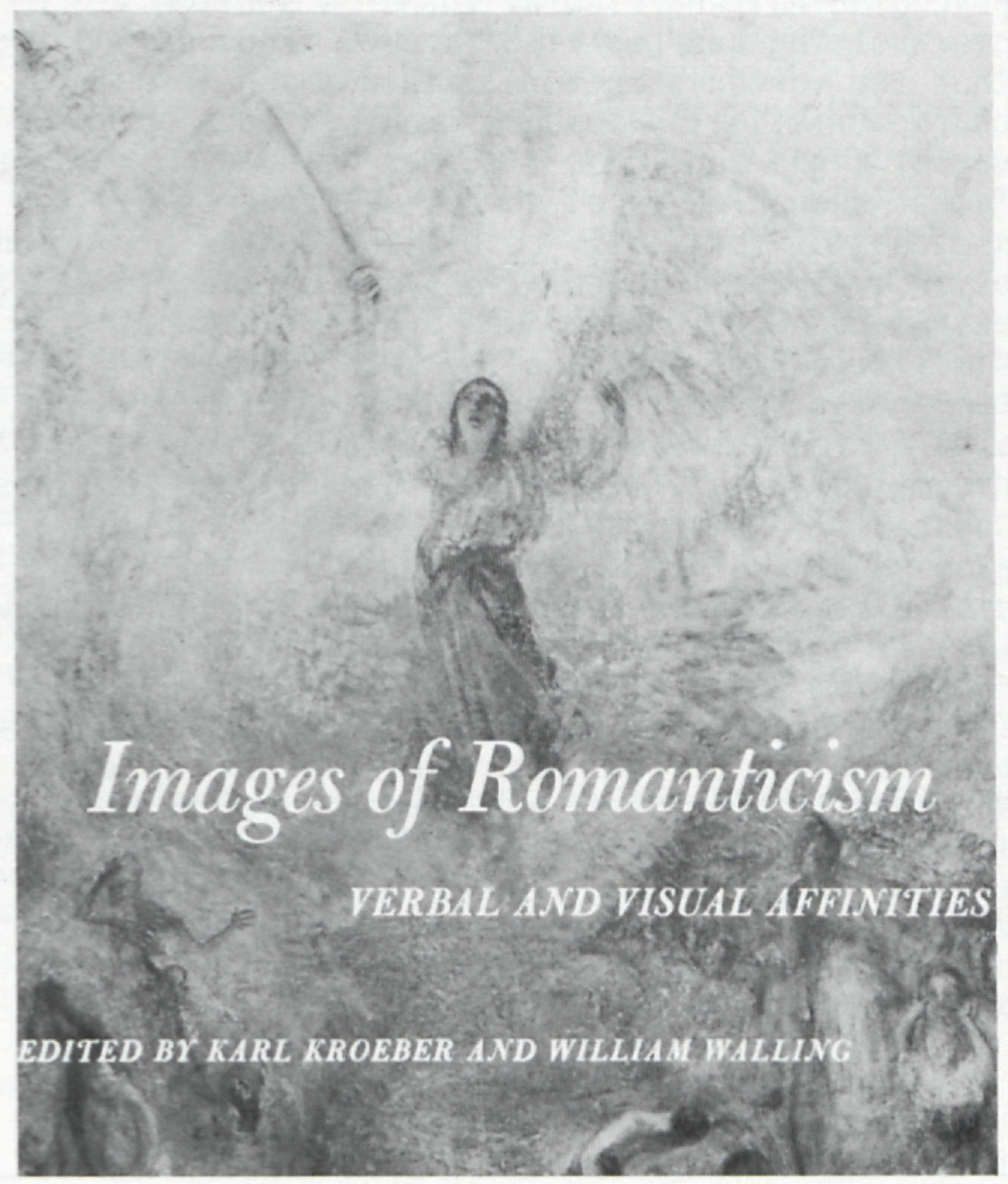 The twelve original essays in this exciting collection approach the interdisciplinary study of literature and the visual arts in nineteenth century England from a broadly humanistic perspective. Wisely avoiding the obsessively verbal and overly abstract methodology of the structuralists, these essays see both literary and artistic works as “complexly engaged in a cultural density of particular time, place and circumstance.” They range from Rudolph Arnheim’s speculations on the translatability of temporal experiences into spatial form to detailed analyses of Turner’s imagery. En route, they establish the breadth of concerns and vitality of such an interdisciplinary approach to romanticism.

Of most immediate interest to Blakists will be Jean H. Hagstrum’s “Blake and British Art: The Gifts of Grace and Terror.” Defining two distinct traditions in Blake’s art, the sublime or terribilità of Michelangelo and the beautiful or delicate, Hagstrum identifies several possible and hitherto overlooked influences on Blake’s art. Most convincing is his analysis of the affinities of George Romney’s black chalk drawings in the classically sublime style (now in the Walker Gallery, Liverpool) to Blake’s depictions of Urizen and of Romney’s images of threatened innocence (in the same collection) to Blake’s depictions of Thel. Hagstrum quite rightly emphasizes Blake’s conscious emulation of the style of delicate beauty also found in works by Stothard, Flaxman, Banks and Romney, which is a useful corrective to the tendency to focus primarily upon Blake’s monumental or horrific images in the sublime style of Fuseli.

All of these essays will reward the reader interested in the relations of literary to visual texts, and I have space here only to point to a few of the highlights. Lorenz Eitner provides an extensive survey of the imagery of cages and prisons in nineteenth century literature and art, developing the historical interpretation that one might expect, namely, that the eighteenth century cages of security and protected innocence gave way, after the French Revolution, to a negative view of the cage as a repressive prison. William Walling’s superb study of Sir David Wilkie and the Scottish literary tradition suggests that an overriding concern with the energy and diversity of social life led both Wilkie and his literary contemporaries, Robert Fergusson, John Galt, Robert Burns and Sir Walter Scott, to eschew abstract formal designs. When, in response to Enlightenment aesthetic demands, they attempted to give a clear structure to their works, these structures seem forced, insincere and theatrical. Walling’s concluding “regret” that a critical, academic concern with abstract structures has led us to ignore or undervalue the richness of human diversity and hence of such “episodic” artworks, should give us all pause.

Several essays concern themselves wholly or in part with Turner’s art. James A. W. Heffernan, in “The English Romantic Perception of Color,” argues that Turner’s use of color parallels Wordsworth’s conception of the “moulding” eye of the imagination which sees every object in nature as distinct and yet part of a single harmonious whole. Karl Kroeber’s fine essay on “Romantic Historicism: The Temporal Sublime” rightly emphasizes the insistence in the works of Turner, Carlyle and Tolstoy upon the ways in which the past is dynamically recreated in the present. Ronald Paulson’s searching essay on the meaning of Turner’s images, “Turner’s Graffiti: The Sun and Its Glosses,” brilliantly analyzes the range of associations—religious, political, begin page 268 | ↑ back to top psychological—carried by Turner’s sublimely overwhelming sun/god/king/father. And Paulson argues that the vortex structure within which this sun characteristically appears grows as much out of verbal signs and ideas (“turner”’s name, his barber-father’s whorled pole) as out of Turner’s early sketches of vortically copulating bodies. Paulson’s psychoanalytical speculations are carried to an extreme by R. F. Storch who argues, somewhat simplistically, that Shelley’s and Turner’s tendencies to abstraction can be equated with an alternation between aggression toward women and a dream-fantasy of total love. Storch then applauds Constable’s and Wordsworth’s “sobriety” at the expense of Shelley’s and Turner’s overly dissociated object-relations, a position that many will find controversial. Martin Meisel, in his concluding study of the use of John Martin’s and Turner’s designs as theatrical scenery, speculates that Martin’s designs were preferred for infernal and apocalyptic scenes and Turner’s for paradisiacal scenes because Martin’s clear outlines emphasize the separation and insignificance of man while Turner’s visual blurring of all distinctions between the human form and its environment creates an impression of heavenly reconciliation.

I have saved the first essay, Rudolph Arnheim’s “Space as an Image of Time,” for final discussion because I find myself in partial disagreement with Arnheim’s contention “that any organized entity, in order to be grasped as a whole by the mind, must be translated into the synoptic condition of space.” Arnheim seems to believe, not only that all memory images of temporal experiences are spatial, but that they are also synoptic, i.e. instantaneously perceptible as a comprehensive whole. I would like to suggest instead that all spatial images, however static and complete as objects, are experienced temporally by the human mind. In other works, we “read” a painting or piece of sculpture or building in much the same way as we read a page. After isolating the object to be read, we begin at the upper left, move our eyes across and down the object; when this scanning process is complete, we return to the images of greatest density and complexity, or to those which the formal design emphasizes, for closer study. However quickly this process of framing, scanning and focusing occurs, it is a process with a definite temporal dimension. In this sense, spatial and temporal artistic works have even more in common than Arnheim acknowledges; temporal works are recalled as spatial structures, but those spatial structures must in turn be “read” or dynamically apprehended through a temporal process.