LEONORA, LAODAMIA, AND THE DEAD ARDOURS

Gottfried Augustus Bürger’s Leonora, A Tale, translated and altered from the German . . . by J. T. Stanley, Esq. F. R. S. &c. went into three London editions in 1796, one of them containing three illustrations designed by Blake and engraved by one Perry, a mysterious figure whose first name and other works (except for one Stedman plate) are unknown.

Wordsworth and his sister, on 1 October 1798 in Hamburg, bought copies of Bürger’s Poems and Percy’s Reliques and sat an hour in the bookseller’s shop reading. M. J. Herzberg in 1925 and Geoffrey H. Hartman in 1968 have noted some influence of Bürger’s poems on Wordsworth’s (Hartman calls it “unwitting”), but no one seems to have noticed how close the sexual theme of Wordsworth’s currently popular Laodamia (1814) is to that of Leonora. (In 1800 Wordsworth chose to imitate, in Ellen Irwin or the Braes of Kirtle, the form of Leonora rather than the “simple ballad strain.”1↤ 1 Wordsworth’s purchase was the Dichter of 1796 (2 vols.), now in Grasmere. When he and Dorothy read “a few little things of Bürger” in the German original, they “were disappointed particularly in ‘Leonora,’ which we thought in several passages inferior to the English translation.” The English passage he quotes (adding an unearthliness not in the German) is not from the Stanley translation. See Letters: The Early Years (1967) 233-34 & nn. and Moorman Early Years, 429.

The parallel is simple but central. Laodamia, seeing her loving but dead husband returned, in the flesh as far as her eyes could tell, pleaded:

Give, on this well-known couch, one nuptial kiss
To me, this day, a second time thy bride!

Leonora, deceived by her eyes into believing her revenant lover was alive and able, pleaded:

Oh come, thy war-worn limbs to cheer
On the soft couch of joy and love!

Laodamia’s offending “the just Gods” by mistaking the spirit for the body (she had failed to “Learn, by a mortal yearning, to ascend—Seeking a higher object”) was firmly rebuked: begin page 97 | ↑ back to top 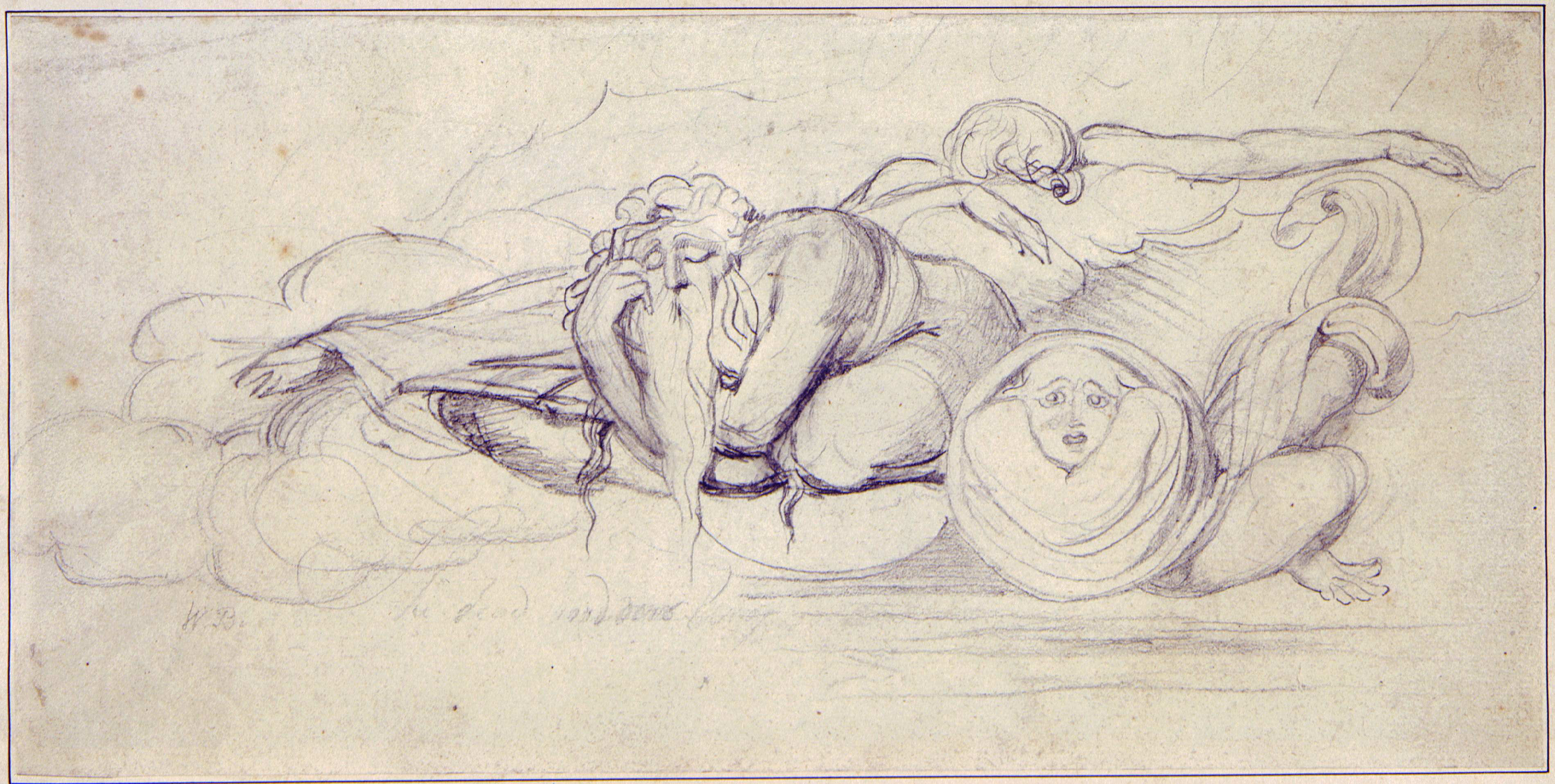 Be taught, O faithful Consort, to control
Rebellious passion: for the Gods approve
The depth, and not the tumult, of the soul;

and turned to “a lifeless corse.” Leonora was surrounded by a crowd of fiends, who danced and howled “this awful lesson”:

Learn patience, though thy heart should break,
Nor seek God’s mandate to control!

begin page 98 | ↑ back to top Each of these uxorious females had forfeited all future bliss. Bürger patched on a happy ending: ’twas “all a dream.” Wordsworth provided grim solace by suggesting that his heroine had become a tree which locked into an eternal pattern of “interchange of growth and blight,” growing too high and getting blasted again and again (Ancient-Mariner like).

Blake’s third illustration depicts Leonora waking and her lover, not really a wraith, rushing toward her with a plucked rose. His second depicts the grief in the community when they thought he was dead. His first, in four tiers, depicts five dead bodies (and an onlooker) stirring in their opening graves, above them five naked soul/bodies dancing against a full moon, above them a fiery horse in air, bearing Leonora clutched to her ghost lover, followed by a horn-blowing fairy whose trumpet is bent back as if to be heard only by himself. In the story the revenant must take his bride back with him into his grave before moon-set. In the top quarter of the picture Blake presents two adjacent cloud-clusters of human forms, a row of burly, sour-faced, naked men under a black cape held up by a boy, and an adjoining row of women mostly bowed down with streaming hair (there is some borrowing from the title-page and last plate of Visions of the Daughters of Albion).2↤ 2 The three Blake/Perry line-and-stipple engravings are reproduced in David Bindman, The Complete Graphic Works of William Blake (London; Thames and Hudson, 1978), plates 380-82.

A fourth design by Blake, a drawing in fairly finished condition but not used in the book, has been puzzled over from time to time without identification and is now in the collection of David Bindman, who kindly grants his permission for its reproduction here. It is on a small bit of paper, probably cut from a larger sheet, and it consists of another cloud-cluster of human forms, a cloven-footed youth with head buried in cloud and with a cloven foot like that of the dreamer in page 2 of The Four Zoas (“Rest before Labour”), a crouched Urizenic figure with triple beard and shut eyes, and a contorted female with twisted body and cloak, her eyes wide open and perhaps her mouth, shrieking.

On the back is a slight sketch, apparently of a body emerging from its grave. And a price, “2 Guineas,” has been crossed out and replaced with “1 Guinea.” I have not asked Bindman what he paid.3↤ 3 For the provenance, see David Bindman, “An Unpublished Blake Pencil Drawing of the Lambeth Period,” Blake Newsletter 4 (1970): 39-40.

What has kept the main design in critical limbo has been its inscription, conjectured (by Rossetti I believe) to read “The dead bad doers,” which does not sound like sense or like Blake. Actually the inscriptions above and below the drawing are not very difficult to make out when we realize they were not written to be read but sketched to indicate the layout of a title-page and the inscription Perry was to engrave. On the right half of the top of the paper, cut off by the top edge, are the letters VOLUME. On the left half presumably there was to be “First” or “Second”; there seem to be shadows of some letters, apparently in upper and lower case.

Beneath the drawing, overlapping its cloud and shading, the lettering, with a very elegant capital T and a tall P, reads:

People who guessed “bad doers” in place of “ardours” had to imagine a stem on the looped o. Perry’s engraving of the inscriptions on the other designs specifies the division of labor: “Blake inv: Perry sc.”

The Blake Concordance discloses that Blake spelled ardor/our either way, and it leads us to a cognate Blakean concept in lines 263-67 of The French Revolution (1791) in which the Nation’s Assembly is described as “Like a council of ardors seated in clouds, bending over the cities of men, / And over the armies of strife . . . / While . . . the pestilence weighs his red wings in the sky.” The praeternaturalism is quite similar. In France the ardors (passions) or spirits of the new Assembly are very much alive, while the ardors of the King and Duke of Burgundy “like the sun of old time quench’d in clouds” (68) or like clouds in a night sky (“his bosom . . . like starry heaven” 81-82) are as dead as the vampires in Leonora; the King sees “thro’ darkness, thro’ clouds rolling round me, the spirits of ancient Kings / Shivering over their bleached bones . . . ‘Hide from the living.’ ’” (72-74). “The dead ardours” makes a perfect title-heading for the poems of Bürger (as anyone with the curiosity to peruse them will find) and a suitable epithet for the interdicted passions of Leonora and Laodamia. As for Blake, his search for a term for the components of the psyche in every body, if it had not come up with “zoas” might conceivably have settled upon “ardours.”

I leave to others the possibly quite rewarding pursuit of graphic and psychological resemblances to the three ardours on Bürger’s cloud in the Spectres and Emanations of Blake’s evolving myth. This design (and the published ones) must have been conceived in 1795-96 just while Blake was translating into design the Night symbolism of Young and was moving in his own symbolism from the Books of Urizen and Ahania into the work that only evolved the term “Four Zoas” after several years of Spirits and Spectres.