Few of William Blake’s engraved designs were reprinted between his death in 1827 and the publication of Gilchrist’s biography of 1863 (as G. E. Bentley, Jr. has noted1↤ 1 G. E. Bentley, Jr. “‘New’[e] Blake engravings . . . ,” Blake 47, p. 204. ), and it seems worth continuing to record those that have escaped the notice of Blake bibliographers.

Two early American piratings of Blake plates appear in issues of The People’s Almanac for 1834 and 1836. An article on page 29 of the 1834 issue (Boston, Willard Felt and Co., and Charles Ellms)—vol. I, no. I—is entitled, “Account of a monstrous snake, Captured by Captain Stedman, in the Wilds of Surrinam [sic] and Skinned Alive by a daring Negro.” The full-page wood-engraved illustration accompanying this article generally copies a well-known and often-reproduced2↤ 2 Reproduced, for instance, by Keynes, Bibliography of William Blake (New York, 1921), at p. 241. Blake design for J. G. Stedman’s Narrative of a five years’ expedition against the revolted negroes of Surinam, London, 1796 (there found in vol. I, p. 182). In the reduced American version, prepared by a talented but anonymous wood-engraver, many details are significantly altered. In the original engraved illustration entitled “The skinning of the Aboma snake, shot by Capt. Stedman,” two natives are laboriously hoisting a limp snake aloft by a rope, while in the background can be seen the lake and boat in which the enormous serpent was captured. The American copy omits the entire back-ground and the two natives, showing instead the supporting rope tied firmly around the trunk of a tree. In the copy, Captain Stedman has donned a pair of sandals, and the snake is writhing in a most animated fashion while being skinned alive. The text of the episode is considerably edited and abridged in The People’s Almanac version, most probably to compress it into one page of unleaded text. There are no embellishments of either style or content. 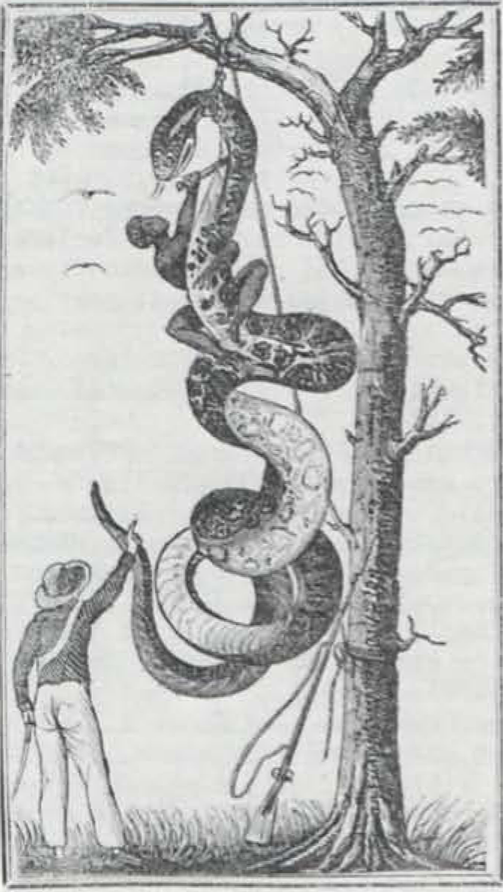 1 Wood-engraved illustration from The People’s Almanac, 1834. 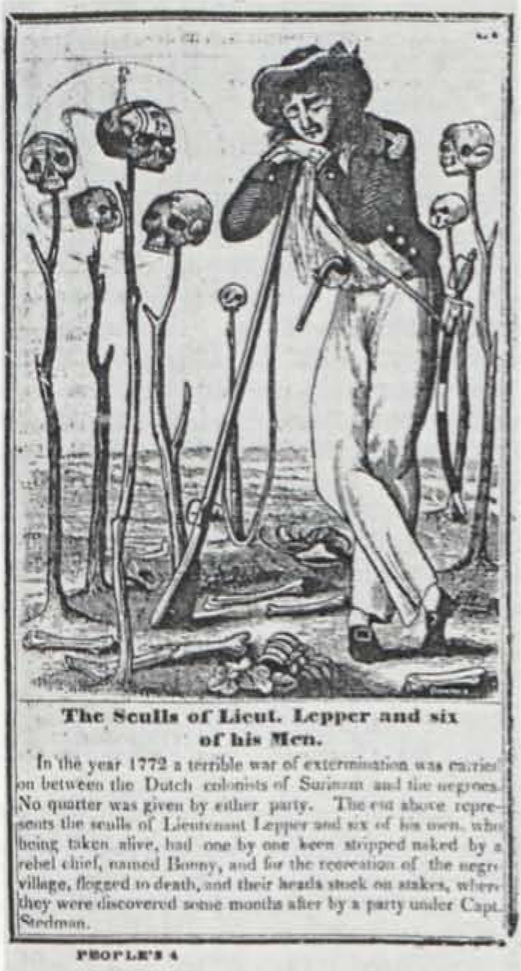 3 Blake’s design for J. G. Stedman’s Narrative of a five years’ expedition against the revolted negroes of Surinam, London, 1796, vol. I, p. 182.
[View this object in the William Blake Archive]
begin page 96 | ↑ back to top

Another illustration from the Stedman work appears on p. 37 of the 1836 issue of the Almanac (vol. I, no. 3). The imprint—as with so many short-lived periodicals of the time—has changed, and now reads: Boston, sold by Lemuel Gulliver,3↤ 3 Despite his remarkable name, this Gulliver was indeed a bookseller in Boston, and is listed in the Boston city directory for 1836. published by Charles Ellms.4↤ 4 The People’s Almanac was published between 1834 and 1841; various issues are found at the New York Public Library, the American Antiquarian Society, and other institutions. Copies are found with varying imprints—some have Boston addresses, some Philadelphia addresses, and some are entirely without imprints. The contents of these various copies are identical. See Drake, Early American Almanacs (New York, 1962). The original illustration (unsigned in the Stedman volume but given to Blake by both Keynes and Bentley) entitled “The Sculls of Lieut. Lepper, and Six of his Men,” appears in vol. I, p. 237, where two soldiers are seen lamenting and gesticulating over the skull of the unfortunate Lieutenant Lepper. A third soldier leans contemplatively on his flintlock, surveying the skulls of the six men who “ . . . had one by one been stripped naked by the rebel negroes at their arrival at their village, and (for the recreation of their wives and children) . . . flogged to death.”5↤ 5 Stedman, vol. I, p. 237. The modified American version shows only a single soldier reflecting on the skulls on poles, surrounded by scattered bones—this last detail added by the American woodcutter. The text beneath, only nine lines long, very briefly summarizes the scene. The People’s Almanac cut is signed at the lower right, “Downes,” most surely J. Downes of Worcester, Mass., working c. 1834-1850.6↤ 6 Groce and Wallace, The New-York Historical Society’s Dictionary of Artists in America, 1564-1860 (New Haven, 1957), p. 186. He is recorded as illustrating other almanacs for Charles Ellms: The American Comic Almanac, The Comic Token. He was also responsible for numerous book illustrations.7↤ 7 Hamilton, Early American Book Illustrators and Wood Engravers, 1670-1840 [including supplements] (Princeton, 1958-1968).

It seems reasonable to assume that the publisher or editor of The People’s Almanac had access to or himself owned a copy of the Stedman work, which formed but one source for the illustrations of the many sensational articles commonly found in such publications. Other articles in The People’s Almanac, for instance, include pieces on the island of Tristan D’Achuna [sic], the shipwreck of the Blendenhall, “Terrific contest with a lion,” “The affecting narrative of [Elizabeth Woodcock’s] sufferings in a snow bank,” and the more predictable ephemeral information of tides, lunar charts, and astronomical tables. It was common to include sensational articles with these necessary charts to make almanacs more salable and attractive, and Ellms boasted in print that future issues of The People’s Almanac would appear “containing numerous large Engravings, and astonishing but true accounts of Adventures, Exploits and Escapes. Also fights between wild beasts, Alligators, Snakes, Men, and Eagles.” The high quality of the wood-engraving is noteworthy, as is the wide range of pictorial sources from which illustrations were taken. One article in the 1834 issue on Napoleon crossing the Alps, for instance, copies the famous painting of Napoleon by David.

It may well be that a systematic examination of the large numbers of American almanacs issued in the mid-nineteenth century will reveal other such copies after Blake.