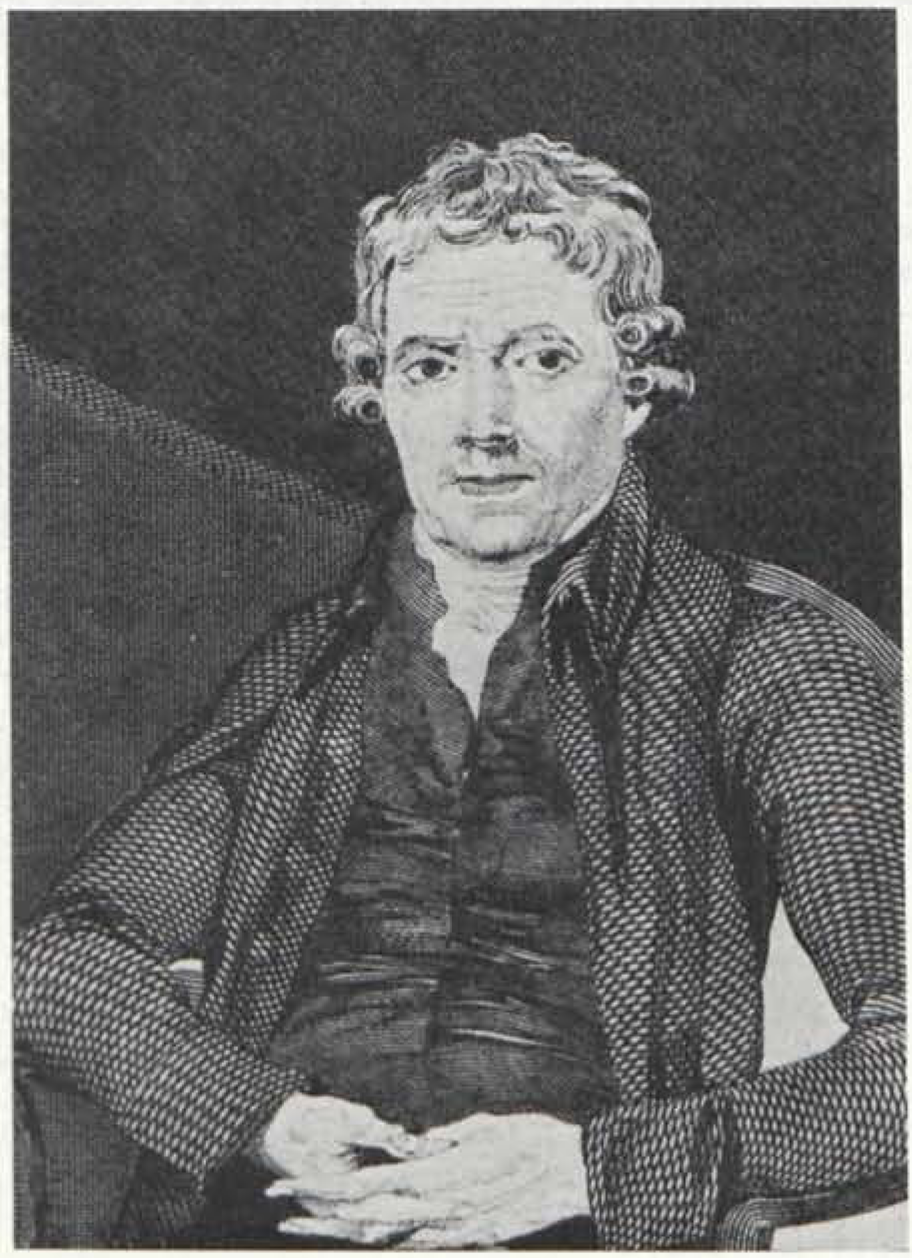 Engraving of Moses Haughton’s portrait of Joseph   Johnson (ca. 1800), when the bookseller was about sixty-five. Reproduced by permission of The Huntington Library, San Marino, California.

Joseph Johnson was a major publisher, a friend of Henry Fuseli and William Godwin, patron of William Cowper and Mary Wollstonecraft and William Blake, publisher of Erasmus Darwin and William Wordsworth, of S. T. Coleridge and Joseph Priestley, of Tom Paine and Horne Tooke, of Humphrey Davy and T. R. Malthus, of Maria Edgworth and William Beckford. The most advanced poets, political, medical, and religious writers, and scientists of the last quarter of the eighteenth century in London were his authors, his customers, and his friends. Any work seriously concerned with such authors or such books must deal with Joseph Johnson and his publishing house. And until Dr. Gerald Tyson published Joseph Johnson: A Liberal Publisher in May 1979, very little was known of either.

A symptom of the neglect of Johnson is the fact that Joseph Aikin’s obituary of him in The Gentleman’s Magazine in 1809 “found its way unchanged into the Dictionary of National Biography” ninety years later (pp. 215, 217). There have been a few articles about him in the last decade and a half, by Tyson, Phyllis Mann, Jane Smyser, Paul Zall, and especially Leslie Chard, but previous to this there begin page 146 | ↑ back to top was little in print about Johnson beyond what Gilchrist published in his biography of Blake in 1863.

To tell the truth, there is still not much known about Joseph Johnson as an individual, for clearly he was a genial but self-effacing man. He did not write books himself, very little of his correspondence has been traced, and his contemporaries did not write much about him. This book is not so much about Joseph Johnson as it is about his publishing house, or rather about the books he published and his relationships with their authors. It is a topological paradox, a circle without a center. Of the books Johnson published, what contemporaries thought of them, Johnson’s generosity to their authors, we learn a good deal. But of the man who focused and fostered so much of this activity, we still know surprisingly little.

This is not for lack of energy or thoroughness on Dr. Tyson’s part. He has used an impressive range of original sources, from reviews of the most important books Johnson published to manuscript diaries of their authors, and he has consulted manuscripts in Guildhall Library, Stationers’ Hall, the Public Record Office, Houghton Library, Bodley, Dr. Williams’ Library, Manchester Public Library, and the Library of Congress, as well, of course, as the most important books Johnson published.1↤ 1 Despite this admirable research, a good deal of the information in the book, particularly about Johnson’s authors, still derives from The Dictionary of National Biography. It might profitably have been extended by refernece to London directories, to Ian Maxted’s The London Book Trades 1775-1800 (1977), and to voting records of the time. We must reconcile ourselves to knowing little of Joseph Johnson the man, for if Dr. Tyson has not found such information it is not likely to survive. And in any case, even though Fuseli lived with Johnson for eight years and Mary Wollstonecraft treated him as father, brother, and priest, his chief importance is as a publisher and a patron of authors. In these roles we see him in considerable detail.

Of his life outside publishing, there are comparatively few facts. Among the more intriguing are that he was apprenticed in 1754 for a fee of £63 to the Musicians’ Guild (p. 6), not to the Stationers’ Company, that he was a stout Unitarian and numbered many Unitarians among his authors, and that the epitaph on his tombstone was composed by Fuseli (p. 215).

His generosity and hospitality were instinctive to the man and were enormously important in attracting and securing authors to him. In 1839 William West wrote: ↤ 2 William West, “Annals of Authors, Artists, Books, and Booksellers, Letter XI: Mr. Johnson, of St. Paul’s Church-Yard, and his Literary Connexions,” Aldine Magazine (1839), p. 205. Neither West nor Redman appears in the quite inadequate index, and West is not mentioned in the “Note on Writings about Johnson” (pp. 217-18).

Under his roof were, perhaps, as much genius, taste, and talent combined among the distinguished writers who assembled at his weekly literary parties, as at any house in the kingdom. . . . I believe the only picture that ornamented his plain old dining room was Fuseli’s original painting of the Nightmare. . . . Mr. Johnson’s business was for some time conducted by a person of the name of Redman, who had, I believe, originally followed the Profession of a schoolmaster, and retained the cross habits and manners of the pedagogue. . . . [Once when I owed Johnson money which I could not immediately pay] He handed me a check on Coutts for upwards of 300 l.; told me to take what I required, bring him the difference, and pay the remainder as soon as I conveniently could.2

Cowper wrote that “his behavior to me has been so liberal, that I can refuse him nothing,” and when Johnson corrected the poetry of The Task Cowper was profoundly grateful:

as often as I could, I paid all possible respect to his animadversions. . . . I do not know where I could have found a bookseller who could have pointed out to me my defects with more discernment. . . .

I have sometimes gone to town with the determination of playing the tyrant [with my bookseller], but that good-humoured face of Johnson’s, with a candid shake of the hand, & how d’ye do Sir, I dine at three, always disarms me of my resolution, & I leave his house without speaking a single dagger.3

The facts about Johnson as a radical are particularly well handled. Johnson was not only a publisher of radicals such as Tom Paine and Horne Tooke, but he was active privately in radical causes as well. For instance, he contributed £2. 11.0 for boots for the French Army in 1792 (p. 155), at a time when official England was mobilizing its resources for war with France. Dr. Tyson has found the documents in the Public Record Office concerning Johnson’s trial for sedition under the gag laws, and he quotes Johnson’s modest description of himself there:

this Deponent further saith that his connections have been with respectable and scientific Writers and his publications generally of a Moral, Philosophical, and Medical Nature, many of which as this Deponent is informed are an honour to his Country.
(p. 160)

Such has been the verdict of history, but a packed jury found him guilty of selling a radical book, and he was sentenced to six months in prison. During his incarceration, his business was carried on, doubtless to the Government’s chagrin, but, as William Gifford exulted in The Anti-Jacobin Review, the

objects of our immediate attacks, the Analytical Review [published by Joseph Johnson], has received its death-blow, and we have more reason to congratulate ourselves upon the share which we have had in producing its dissolution, than it would be expedient here to unfold.

Joseph Johnson’s name appears on several thousand imprints. About half of these were pamphlets, and more than half of the total were reprints. About a quarter of the titles were anonymous, mostly religious and political works, and the largest single category was religion. Johnson published comparatively little fiction, and most of the fiction he did produce was propagandistic. (Dr. Tyson does not mention Johnson’s important relationship with Charlotte Smith as publisher of her novels.) The most important lack in the book is a bibliography, or even a list, of Johnson’s publications. Clearly such a list would have been enormous and would have quite altered the character of the book, but without details of either publisher or publications the reader often feels himself to be in a twilight land, seeing uncertainly in the half-light and unable to distinguish for himself the woods from the trees. We may hope that Dr. Tyson will publish the list of Johnson’s publications which, according to his publisher’s blurb, he has already collected. Only then will we be able to place this book in a proper context.

It should also be recognized that there are few technical details here about Johnson’s publishing house. There is no list of the printers he used, cost analyses, description of his house style, account of the paper in the books, the mode of issue (stitched, in parts, by subscription, etc.), or the publishers with whom he joined in partnership or in congeries. This is a publishing history in the perfectly legitimate old-fashioned sense of an account of patronage and friendship and how they affected literary substance. Joseph Johnson: A Liberal Publisher is a worthy publication of modest pretensions and dimensions, and careful scholars concerned with the last quarter of the eighteenth century will long be indebted to Dr. Tyson’s devoted labors. We are unlikely to have a more comprehensive account of Johnson’s circle, and that circle was of major importance in the political, religious, medical, intellectual, and poetic life of his time. But a circle without a center is a ring, and in this book it is the ring which is important. And doubtless this is as Joseph Johnson would have wished. A publisher lives through his publications and his authors, and it is astonishing how many of Johnson’s authors are considered, in 1800 and in 1980, to be of major importance. It is through this ring of bright authors that Johnson lives today.