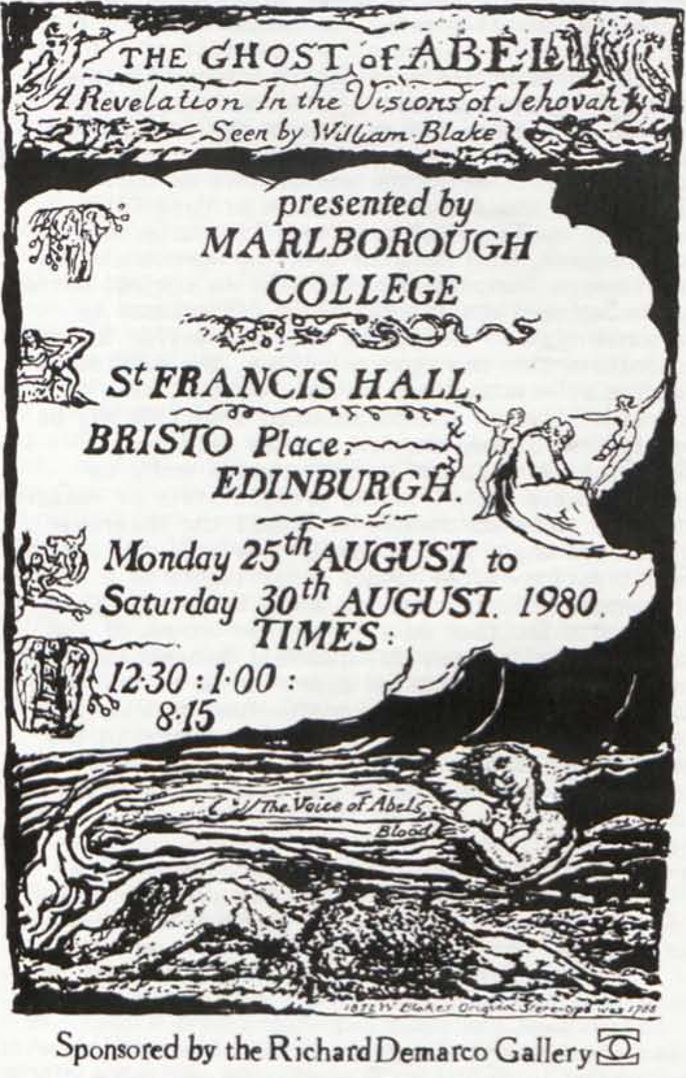 The Ghost of Abel, a play produced by Marlborough College for the Edinburgh Festival Fringe. Directed by Michael Davis. 25-30 August 1980.

From Aardvark to Z Theatre Company, in music, dance, mime and drama, there were over 330 shows, including 180 premieres, on offer at the 1980 Edinburgh Festival Fringe. Listed in the Fringe program between a revue called West Ham v. Hearts and a play named The Human Puppet Theatre, the eye was arrested by the detail that Marlborough College’s production of Blake’s The Ghost of Abel would be playing three shows a day during the second week of the Festival, sponsored by the prestigious and enterprising Richard Demarco Gallery.

The Edinburgh Fringe is a unique jewel in the cultural life of Britain. For three weeks in late summer a bewildering mixture of professional and amateur groups from both sides of the Atlantic compete to fill excruciatingly uncomfortable seats hastily installed in countless church halls, schools, begin page 57 | ↑ back to top youth centers, at least one enlightened nightclub, the odd marquee and perhaps even a few “legitimate” theatres. Audiences can be tiny even at the very low prices charged and Fringegoers can be as choosy as they please. If Prickly Heat University’s production of Genet’s juvenilia proves to be less than definitive, it can be consoling to know that Add Hock Th. Co. will be opening at the other end of the street in ten minutes’ time.

Not that more philosophical tastes are neglected. The Ghost of Abel, produced by one of Britain’s leading independent schools, under the direction of Michael Davis, proved an engaging and demanding event that crammed much into its half-hour playing time. Rather than leaving Blake crying in the wilderness to a passing audience perhaps unfamiliar with English romanticism (or even Cain and Abel), it had been decided to present Blake’s drama as the last statement in a gradually unfolding Christian myth beginning with Genesis 4 and then proceeding to The Ghost of Abel via extracts from Coleridge’s The Wanderings of Cain and Byron’s Cain: A Mystery.

Marlborough College was not the only company operating from St. Francis’ Hall, and its show was sandwiched between two other groups performing almost immediately before and after. Such a quick change around must have been difficult for everyone. A church-hall accommodating a succession of performances cannot offer much in the way of normal theatrical facilities and Michael Davis was wise to opt for simple uniform of jeans and kaftans for his cast.

The play began with a semi-ritualistic enactment of the Cain and Abel section of Genesis with each verse spoken by a different actor. In this scene, and at times throughout the play, a seated chorus of onlookers was used to good effect in echoing the stylized facial and grouping characteristics of the Job designs. Indeed, one could have wished that the nettle of the language of stylized gesture had been grasped more firmly and confidently by the company, because it is a mode of expression that seems particularly well suited to swiftly moving epigrammatic language.

Coleridge’s The Wanderings of Cain does not adapt easily to the stage, even in abridgement, but Cain’s subtle edging towards repentance is quite close to Blake’s lines on the forgiveness of sins which concluded this episode. Furthermore, the Coleridge piece was dramatically relevant because it introduces Abel’s ghost, which is not present in Byron’s play. Byron’s Cain: A Mystery was a successful third movement not merely because it directly gave rise to The Ghost of Abel but also because it contains promisingly dramatic writing. Adam’s “Eve! let not his, / Thy natural grief, lead to impiety” sounded eminently mealy-mouthed in contrast to Eve’s almost shrewish “His will! . . . . May all the curses / Of life be on him!” These are appropriate colleagues for Los and Enitharmon in their weaker moments and suitable precursors for elements in Blake’s Adam and Eve. The skillfully cut Cain: A Mystery ended with Cain in painful self-knowledge addressing Abel’s corpse and providing a cue for The Ghost of Abel: “Now for the wilderness!”

The Ghost of Abel was heralded by choice Blake epigrams and part of the preface to Jerusalem. The slightly augmented title, “A Revelation In The Vision of Elohim Jehovah Seen by William Blake, Dedicated to Lord Byron in the Wilderness,” made a convincingly firm curtain opener and even Blake’s “stage” directions sounded well. In this strenuous evening one was driving four-handed with the Bible, Coleridge, Byron and Blake, but the easy syntax of The Ghost of Abel came across with exceptional clarity, as did the movements of the actors. A line of standing figures became first a grave and then a row of flames from which Satan emerged. One caught fleeting echoes of the illuminated books in the stances and positions of the players.

Marlborough College ended by following Blake’s invitation to “Sing,” and it was here that I had my only reservations. Blake’s “Peace, Brotherhood and Love” has a grand simplicity of message that makes it suitable for the refrain of a song, as Michael Davis correctly recognized, but one felt that they too easily translated it into a Sixties-type pop culture hymn. However, this may have been a sensible arrangement for a cast in its mid-teens and without benefit of musical accompaniment.

Was this a successful theatrical experiment? The answer must be yes. The Bible stories are the stuff of the oldest traditions of English drama and seeing Coleridge’s, Byron’s and Blake’s interpretations of the same story together in the space of half an hour was a valuable experience. The virtue of Michael Davis’ production was that it set all three in vivid context. One may now ask others with bigger and better resources to try and do likewise in this surprising and largely untrodden area of romanticism. 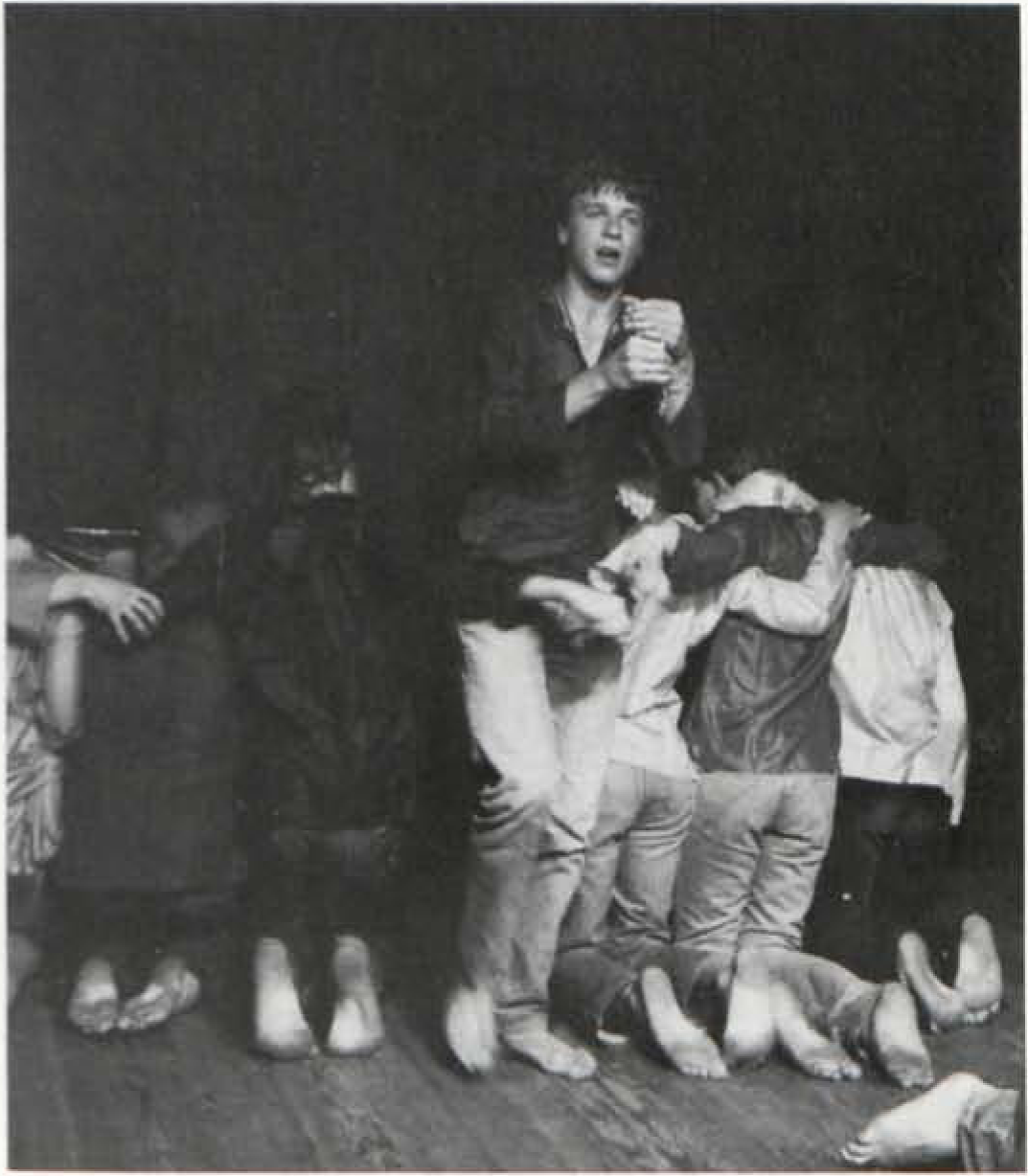