THE MUSIC OF THE ANCIENTS

When one reads that the occupations of Samuel Palmer and his friends at Shoreham were “literature, and art, and ancient music,”1↤ 1 A. H. Palmer, The Life and Letters of Samuel Palmer, 1892, p. 53. curiosity is aroused by the last of these activities, as it is the one about which the least is known.

From his youth, Palmer was both a singer and a violinist2↤ 2 Raymond Lister, Samuel Palmer, a Biography, 1974, p. 28. and Francis Finch had considerable skill as a pianist and counter-tenor. Thus, it is not remarkable to discover that the Ancients passed their evenings with such contemporary songs as Moore’s Irish Melodies (Finch’s rendition of “The Minstrel Boy” was especially remembered)3↤ 3 Eliza Finch, Memorials of the Late Francis Oliver Finch, 1865, pp. 331, 356. , although the vision of Palmer and Calvert walking through Shoreham to Palmer’s singing of “The British Grenadiers” places a heavier demand upon the imagination. (Presumably Palmer sang the older version of the tune, with a rising phrase and a turn for the words “none that can compare”).4↤ 4 A. H. Palmer, p. 28n.

Another musical enterprise of the Ancients has been recorded: ↤ 5 Finch, p. 45.

But the favourite haunt was a wild lane near Shoreham in Kent, flanked on either side with great old beech trees; it was hedged in by their spreading roots in the wildest contortions. Some years before it had been the scene of a murder, and while in its pristine wildness and grandeur it was most admirably adapted as the theatre for the enactment of some of the scenes of witchcraft so popular among the Tableaux vivans. They all knew the Macbeth music by heart, and many a night made the ‘black lane’ ring with it.5

A. H. Palmer confirms that the Macbeth music in question was that published first in 1770, claiming to be Boyce’s revision of the score which Matthew Locke composed for D’Avenant’s version of the play.6↤ 6 A. H. Palmer, p. 42. This music, which held the stage until 1875, was in fact composed in 1702 by Richard Leveridge.7↤ 7 Roger Fiske, English Theatre Music in the Eighteenth Century (Oxford, 1973), pp. 26-27. The following melodramatic lines would seem to suit the occasion upon which Palmer and his friends performed them:

Crimes foll’wing crimes on horror wait
The worst of creatures faster propagate
Many more murders must this one ensure
As if in death were propagation too
He shall he will he must spill much more blood
And become worse to make his title good.

When we try to identify the “ancient music” which provided a more thoughtful contrast to “Locke” and Tom Moore, we might do well to remember that, in the early nineteenth Century, the phrase “ancient music” would have suggested the “Concerts of Ancient Music” given under Royal patronage. The definition of “Ancient” in this context was “no music less than twenty years old,” but the repertory was primarily Handelian, although works by the older English composers were also performed. In the light of this it is interesting to find this reference in a letter of 5 June 1836 from Palmer to Richmond: ↤ 8 The Letters of Samuel Palmer, ed. Raymond Lister (Oxford, 1974) I, 77.

Then vow you’ll not stand it; but get out your Handel;
and a kind friend will call in and give you some scandal.8

There is one firm clue concerning the musical repertory of “The Ancients.” In his memorial essay on Francis Finch, Palmer writes, ↤ 9 Finch, pp. 355-56.

The writer has felt more pleasure in sitting by his pianoforte, listening to fragements of of Tallis, Croft, or Purcell . . . than from many displays of concerted music.9

Given this, we may attempt to discover the extent to which music by these composers would have been available in the 1820s.

At this point, it should be noted that, apart from a few pieces printed in such collections as Stafford Smith’s Musica Antiqua, Palmer and his friends would have had no access to Dowland, Campion and the earlier English composers whose printed works have a poor rate of survival and whose notation would have presented considerable difficulties.

A surprising quantity of Purcell’s vocal music would have been obtainable; a “third edition” formed from unsold sheets of earlier editions of Orpheus Britannicus had appeared in 1721. A Collection of Songs, taken from Orpheus Britannicus, was published by John Johnson in the 1790s. Benjamin Goodison published at the same time several volumes of a proposed “complete” edition.10↤ 10 For this and other information, I am indebted to Dr. Richard Luckett and Mr. Richard Andrewes, both of the University of Cambridge. Purcell could also be found in Clarke’s 1809 collection or Corfe’s 1805 Beauties of Purcell, which contains a generous selection from the operas, stage music and songs. In view of Palmer’s admiration for Dryden, and of the Ancients’ common vision of the pastoral landscape, begin page 99 | ↑ back to top 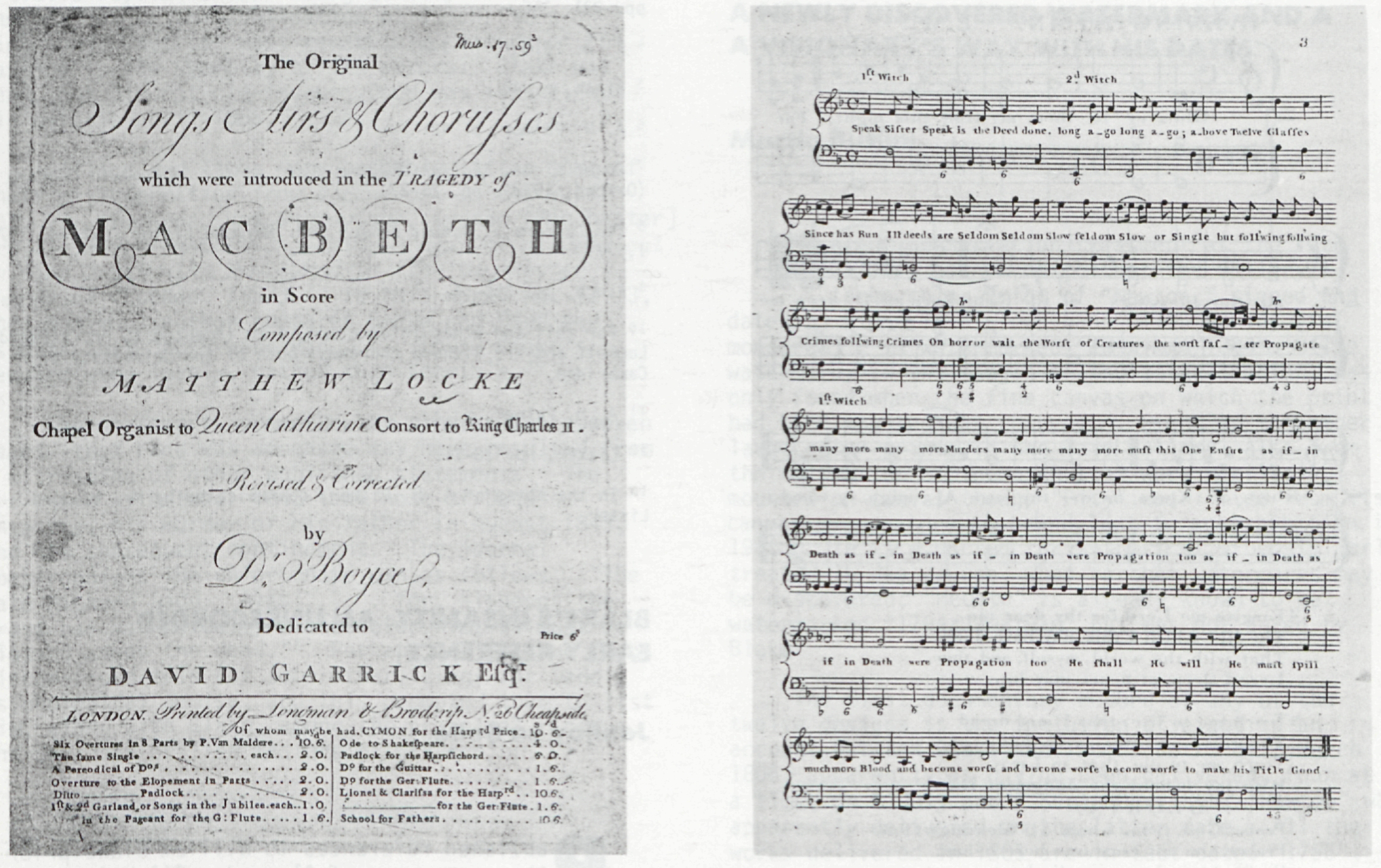 Pages from (title page of) Leveridge’s music for Macbeth.
we might suppose that this song from King Arthur would have found favor:

For folded flocks and Fruitful Plains
The Shepherd’s and the Farmer’s gains
Fair Britain all the world outvies
And Pan as in Arcadia reigns
Where pleasure mixt with profit lyes.

Croft’s Musica Sacra was published in 1724. It seems unlikely, judging from the complexity of the part writing, that the Ancients would have sung the choral anthems and, while the accomplished Finch would have been able to sing the vocal line of any of the solo anthems, there would have been no instrument available for the accompaniment. Especially in view of the fact that thirty Select Anthems by Croft, with convenient pianoforte/organ accompaniments, were published in 1847, it seems likely that Finch sang these pieces to Palmer after they had left Shoreham.

Chants and hymn tunes attributed to all three composers make frequent appearances in contemporary hymn and anthem books, and these are the form in which Tallis would have been easily available to Palmer’s friends. (The vogue which Tallis enjoyed in the 1840s would not have started by then, although Tallis’ full services were in print and in use in the early nineteenth century.)

Boyce’s Cathedral Music, with Arnold’s continuation, does, however, provide three comparatively easy pieces: “I call and cry,” “Hear the voice and prayer” and “All people that on earth do dwell.” There is one piece of which we may be sure, as it recurs in many collections, and that is Tallis’ Canon, which was used throughout the period as an evening hymn.

The idea of the evening hymn is strong, in Palmer’s world. There is the painting Coming from Evening Church; there is his statement that ↤ 11 A. H. Palmer, p. 13.

and there is also the poem,

With pipe and rural chaunt along,
The Shepherds wind their homeward way,
And with melodious even song,
Lull to soft rest the weary day . . . 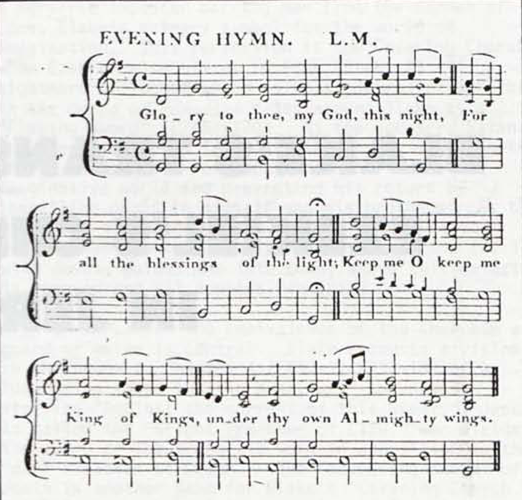 For I though base believe that Thou for me
Hast better things prepared than village gardens be:

By streams of life, and th’ever blooming tree,
To walk, and sing with antique saints, and see
Bliss above all, dear Lord thy face eternally.12

Thus we might imagine the Ancients singing: Finch leading the round with his alto voice, Palmer’s baritone,13↤ 13 In the notes of A. H. Palmer, communicated by Mr. Raymond Lister. then Calvert and the others joining with the words,

Glory to Thee my God this night
For all the blessings of the light
Keep me o keep me King of Kings
Beneath thy own almighty wings.