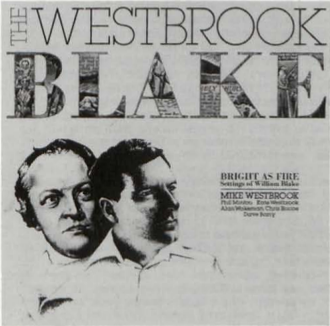 Mike Westbrook. Bright As Fire, a recording of jazz settings of Blake. London: Original Records. Released and distributed in the U.S.A. and Canada by Europa Records, Orlando, Florida. $8.98.

Blake died singing: but there have been few attempts to celebrate his genius musically, by comparison with the large number of illustrated commentaries and facsimile editions now available. Mike Westbrook’s Bright as Fire is a new album of jazz settings of Blake’s poetry, and it earns its title with Blakean vigor and a rare Blakean sense of satirical fun.

The first two tracks each open with a piano solo, hymnlike and slightly portentous in the manner of Alan Price, but the lines from Jerusalem (Plate 27:19-34, 103-06, and Plate 86:1-10) are delivered by Phil Minton with ecstatic conviction. Despite the inevitable children’s choir, the Blake we hear is no grade-school saint but a full-blooded proletarian artist. Alan Sinclair’s tuba in “The fields from Islington to Marybone” makes Track 1 rather bass-heavy, but “I see thy Form” is good, with an inspired trumpet entry at “From thy white shoulders.”

Track 3, a powerful setting of “London,” opens with ghastly screams on saxophone and clarinet. A lonely lament on saxophone (which is used throughout rather as Vaughan Williams used it in Job: A Masque for Dancing, suggesting the whining hypocrisy of Job’s comforters) then introduces the song itself, delivered in tones of bitter despair by Kate Westbrook, whose voice has the riveting huskiness of Lotte Lenya’s—it is worth noting that Mike Westbrook’s band came to Blake by way of Brecht and Kurt Weill. Further lamentations on saxophone, gradually gibbering into incoherence, conclude the track, the most original on the album. After the intensity of “London,” “A Poison Tree” is played for sheer fun as a diabolic tango. Alan Wakeman’s tenor sax growls menacingly; Kate Westbrook’s hoydenish diction is just right for the exaggerated malice of this poem. The tango rhythm accelerates to a contemptuous closing flourish.

“Holy Thursday” (the one from Experience) is the longest track on the album. The poem itself is sung to a simple accompaniment of piano and cello, but there is a long and highly inventive jazz epilogue. Clarinet, bass and drums are joined by saxophones and tenor horn, playing lamenting, wailing chords, then the trumpet stutters mockingly, caricaturing the smug “philanthropy” affected by the “wise guardians of the poor.” Chris Biscoe’s saxophone imitates a pathetic, leaden-footed dance to the choppy accompaniment of cello and bass.

This mood of hopelessness is dispelled by the opening of the last setting, based on an extract from America and one from The Four Zoas. It begins with a Hebraic-sounding summons on tenor horn; Phil Minton sings, unaccompanied for the first four lines, “Let the slave, grinding at the mill, run out into the street . . . .” His reassuringly cockney voice is joined (at “his chains are loose”) by the band, which crescendoes to a startling and effective key-change at “The Sun has left his blackness.” The great affirmation, “For everything that lives is holy,” is the climax of this last track; but before the final fade-out there is an impassioned reading (by Mike Westbrook) of “What is the price of Experience?” from The Four Zoas, with ostinato accompaniment by piano, horn and saxophones.

Adrian Mitchell chose the texts, and his emphasis on Experience and the prophetic books reflects what is usually thought of as modern taste in Blake. The music was originally composed at Adrian Mitchell’s request for his Tyger (1971), “a stage show in celebration of the life and works of William Blake,” and Mitchell writes that what had impressed him about Mike Westbrook’s music was its combination of “earthiness and fire.” These qualities, with much bold and inventive musicianship, are strongly apparent in this valuable addition to Blake discography.