A Minute Particular in Blake’s Songs of Innocence, Copy O

As several commentators have remarked, the eight tiny vignettes or panels which frame the text of the “Introduction” in Blake’s Songs of Innocence are difficult to decipher, if indeed they can be deciphered at all.1↤ 1 See, for example, Edwin J. Ellis’s introduction for the facsimile edition of Songs of Innocence and of Experience (London: Bernard Quaritch, 1893), xviii. For easier reference, my citations of specific volumes of the Songs follow G. E. Bentley Jr.’s practice of referring to Songs of Innocence as Innocence, and to Songs of Innocence and of Experience as Experience (Blake Books, 1977). The Ellis facsimile is of Experience, U. See Bentley, Blake Books, p. 436. Bentley describes the vignette as “a man reading” in William Blake’s Writings, 2 vols. (Oxford: Clarendon, 1978), I, 24, and in Blake Books, p. 389. Yet as a group these vignettes are clearly derived, as Sir Geoffrey Keynes has argued, from “a medieval manuscript illustrating the Tree of Jesse.”2↤ 2 Keynes’s commentary for Songs of Innocence and of Experience (London: Trianon, 1967), pl. 4. Facsimile of Experience, Z. See Bentley, Blake Books, p. 369. With this antecedent in mind, recent commentators have suggested that the sixth vignette, the second from the top in the group of four to the right of Blake’s text, may be Jesse. David Erdman summarized much of earlier commentary when he described this figure as “huddled” with “legs crossed, head on hand; Jesse himself (suggests Essick) as in the Sistine fresco; or regarding or working at something in his lap, 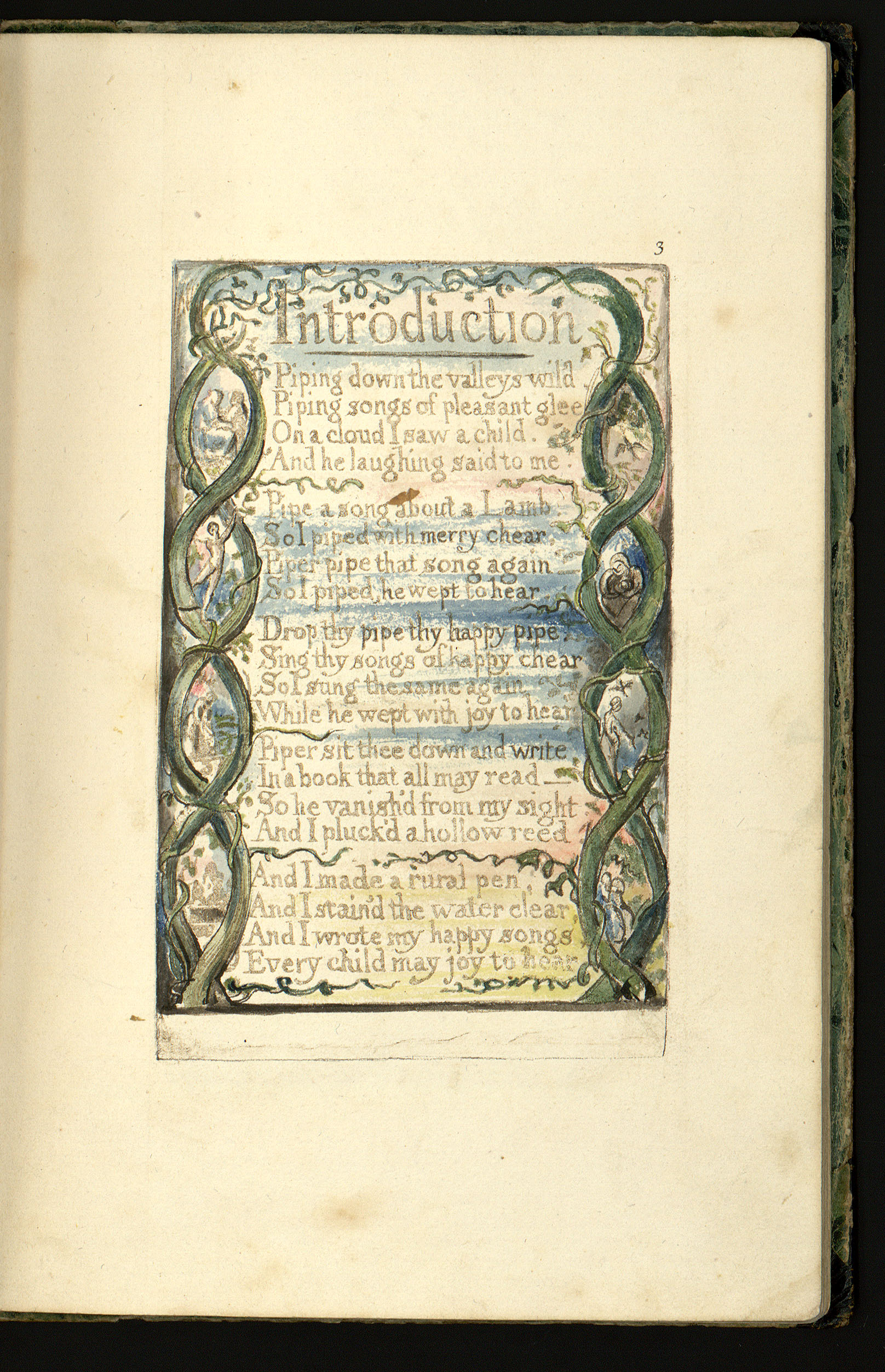 1. “Introduction,” Songs of Innocence copy O, reproduced by permission of the Humanities Research Center, the University of Texas at Austin.
perhaps writing.”3↤ 3 Erdman’s commentary for The Illuminated Blake (N.Y.: Anchor Doubleday, 1974), p. 45. Facsimile of Innocence, I, with reference in this instance to Experience, U. See Bentley, Blake Books, pp. 407 and 422. However, in Songs of Innocence, Copy O, the figure is well defined. It is not Jesse, but a woman who holds a baby in her lap (illus. 1).4↤ 4 Songs of Innocence, O. Reproduced here as illus. 1 through the courtesy of the Humanities Research Center, University of Texas at Austin. See Bentley, Blake Books, p. 409. This figure is clearly a deliberate variant, of interest not only because it may be unique among copies of the Songs, but also because it demonstrates Blake’s atypical attention to this minute particular in the “Introduction” of Songs of Innocence.

Impressions of this plate that have not been retouched show, in the sixth vignette, a figure that appears to be sitting, the legs slightly crossed, and the left arm possibly bent.5↤ 5 Copies which show just the image printed from the copperplate or an image that is unretouched in the area of this vignette are: Innocence, E (New York Public Library, Berg Collection), U (facsimile, Songs of Innocence [Boston, 1883]) and Experience, C, b, h, A (facsimile, Songs of Innocence [London: Ernest Benn, 1926]). I am indebted to Robert N. Essick for descriptions of Innocence, U and Experience, c, b, h, and AA (see below). Otherwise, little can be distinguished. A similar figure appears in retouched or tinted copies, although a few exhibit variations in the definition of the arms and legs (illus. 2).6↤ 6 Copies which are retouched or tinted but still show the same image as that of the unretouched copies include: Innocence, B (facsimile, London: Trianon, 1954), D and K (Morgan Library), I (reproduced here as illus. 2 through the courtesy of the Henry E. Huntington Library), N (Estelle Doheny Collection of the Laurence Doheny Memorial Library) and Experience, B (facsimile, David Bindman, The Complete Graphic Works of William Blake [N.Y.: Putnam, 1978], p. 217), E (Henry E. Huntington Library), I (reproduced in The Illuminated Blake, p. 45), V (Morgan Library), Y (Metropolitan Museum of New York), Z (facsimile, London: Trianon, 1967), AA. For additional information concerning the copies cited in these notes, see Bentley, Blake Books, pp. 365-438. In still other copies there is something—but it is unclear what—in the lap of the figure.7↤ 7 Two copies besides Innocence, O and possibly Experience, AA (see Erdman’s note concerning Essick’s reading of this figure in The Illuminated Blake, p. 45) appear to show something in the lap of the figure: Experience, U (mentioned by Erdman, The Illuminated Blake, p. 45) and T (facsimile, Songs of Innocence and of Experience [Liverpool: Henry Young and Sons, 1923]). See Bentley, Blake Books, pp. 436 and 421. Finally, two Muir facsimiles respond with admirable inventiveness to the muddled as well as huddled figure of most copies by altering its seated position or by having the figure stand.8↤ 8 Songs of Innocence and of Experience (facsimile of Innocence, D [Edmonton: Muir, 1884]) and Songs of Innocence (Muir and Trumble facsimile of Experience, A [London: Bernard Quaritch, 1927]). See Bentley, Blake Books, pp. 434 and 488. Even in Innocence, Copy N, one of three copies which Blake produced shortly before and after Copy O, the figure is indistinct.9↤ 9 See Bentley’s chronological list of the Songs in Blake Books, p. 367. Yet if the clearly depicted image of a mother and child in Copy O is unusual in the context of 2. “Introduction,” Songs of Innocence copy I, reproduced by permission of the Huntington Library, San Marino, California.
[View this object in the William Blake Archive]
begin page 19 | ↑ back to top other versions of the same plate, it is typical of its immediate context, Copy O, which displays extensive ink modeling of individual figures and designs, particularly notable in the frontispiece, “Introduction,” “The Little Black Boy” (1 and 2), “The Little Boy Found,” “The Chimney Sweeper,” and “Night” (1). Together with applications of color specific to this copy, such modeling either gives sharper definition to principal figures or permits some redefinition of smaller ones, as is the case with the “mother and child” vignette discussed here. Because there may be other variants of this figure in copies which I have not consulted, this note invites additional notes and queries concerning the “Introduction” of Songs of Innocence.