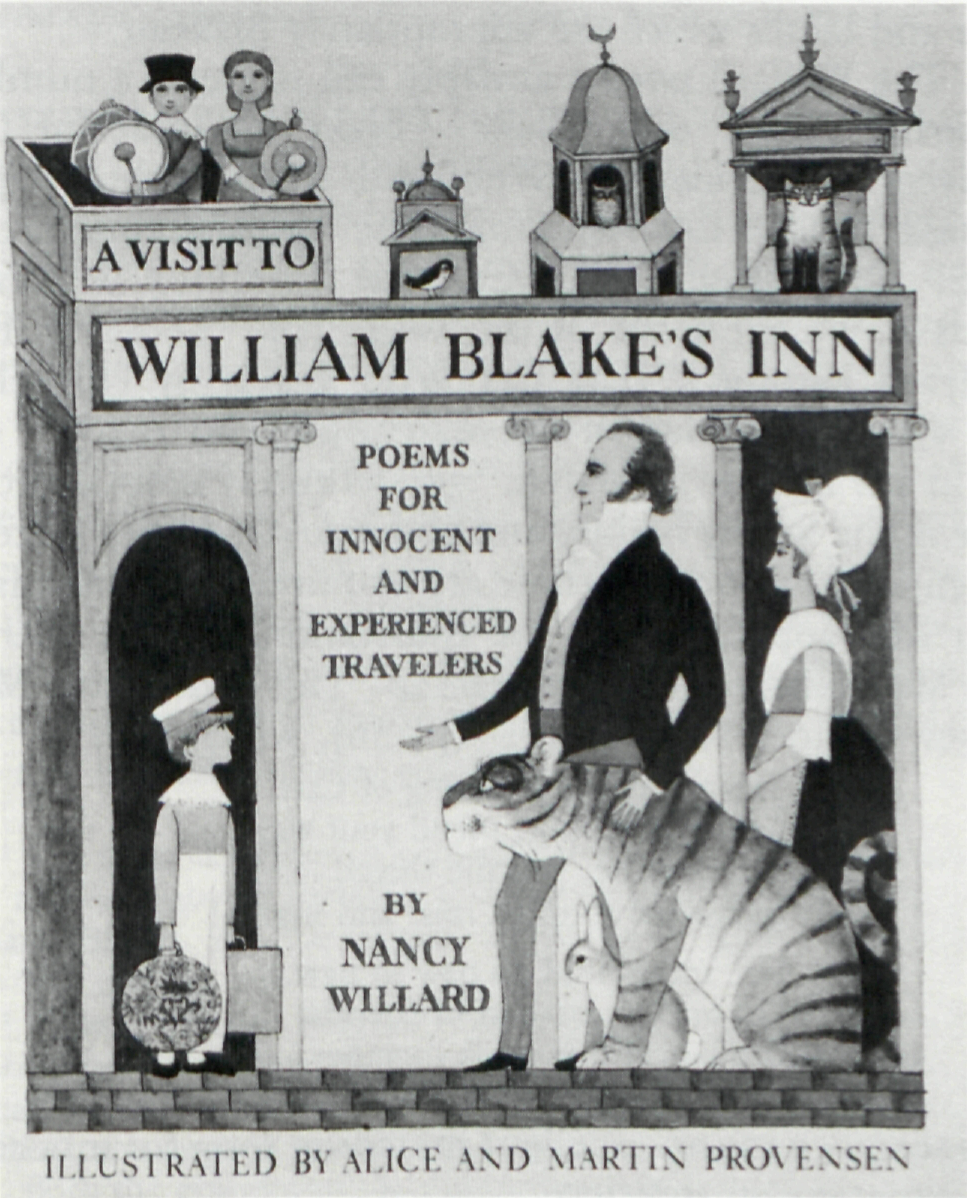 Reviewed by Elizabeth B. Bentley

Having published her first book while a high school senior, Nancy Willard has gone on to publish some fourteen books, a number of them children’s books for which she has twice received the Lewis Carroll Shelf Award. According to the dust jacket summary of A Visit To William Blake’s Inn, she teaches in the Vassar English Department. Her scholarly publications include a study of four twentieth-century poets, William Carlos Williams, Francis Ponge, Rainer Maria Rilke, and Pablo Neruda, entitled testimony of the invisible man (Columbia, Missouri: University of Missouri Press, 1970). In the introduction to this study, a Vassar colleague writes admiringly of Nancy Willard’s poetry. A Visit to William Blake’s Inn, then, is written by an experienced and successful author of children’s stories, a university teacher of English, a critic and a practicing poet who connects this book with her youthful introduction to William Blake’s Songs of Innocence and of Experience.

The inside of the dust jacket of A Visit To William Blake’s Inn assures us that the illustrations reflect the multiple-award-winning artists’ “deep love for William Blake and the London in which he lived.” The paper and color printing of the book are of very good quality. The first illustration to the first poem (pp. 14-15) shows a redhaired man on the steps of a house labelled begin page 36 | ↑ back to top “WILLIAM BLAKE ENGRAVER POET & PAINTER” and “WM BLAKE BED AND BREAKFAST.” This is quite a happy beginning except that William is disconcertingly dressed as a high-Victorian businessman, in a frocked coat, a double-breasted waistcoat and morning trousers. The Provensens are presenting a later period, often blatantly not William Blake’s London.

However, William Blake does remain redhaired and often is to be seen writing or drawing. On page 21 there are a man, woman and boy engaged by candlelight in mysterious engraving or process with a press which is not for printing.1↤ 1 The scene is somewhat reminiscent of Fermin Rocker’s illustrations to The Gates of Paradise, a children’s novel based on the poet William Blake. See “A Vision in Fiction,” Blake, 12 (Winter 1978-79), 209-10. On pages 29, 35 and 41 the redhaired man sits at a desk or drawing board with a quill pen and blank sheet before him. Since there is no evidence of an ink pot to hand, the paper seems doomed to remain blank.

A tiger is one of the guests at William Blake’s Inn. The illustrations on pages 12, 32 and 37 are vaguely reminiscent of the Tyger of Blake’s Songs of Experience. Perhaps one should leave it at that. However, on pages 21, 35, and 41 the Provensens have produced an overgrown pussy cat which is neither Blakean nor tigerish.

Twice the verses call for a vehicle to be illustrated, and the Provensens have responded with “Blake’s Celestial Limousine” (p. 16) and the vessel Believe (p. 31) which is a wheeled boat captained by Blake. Both these vehicles enjoy the whimsey of a Frederick Rowland Emett 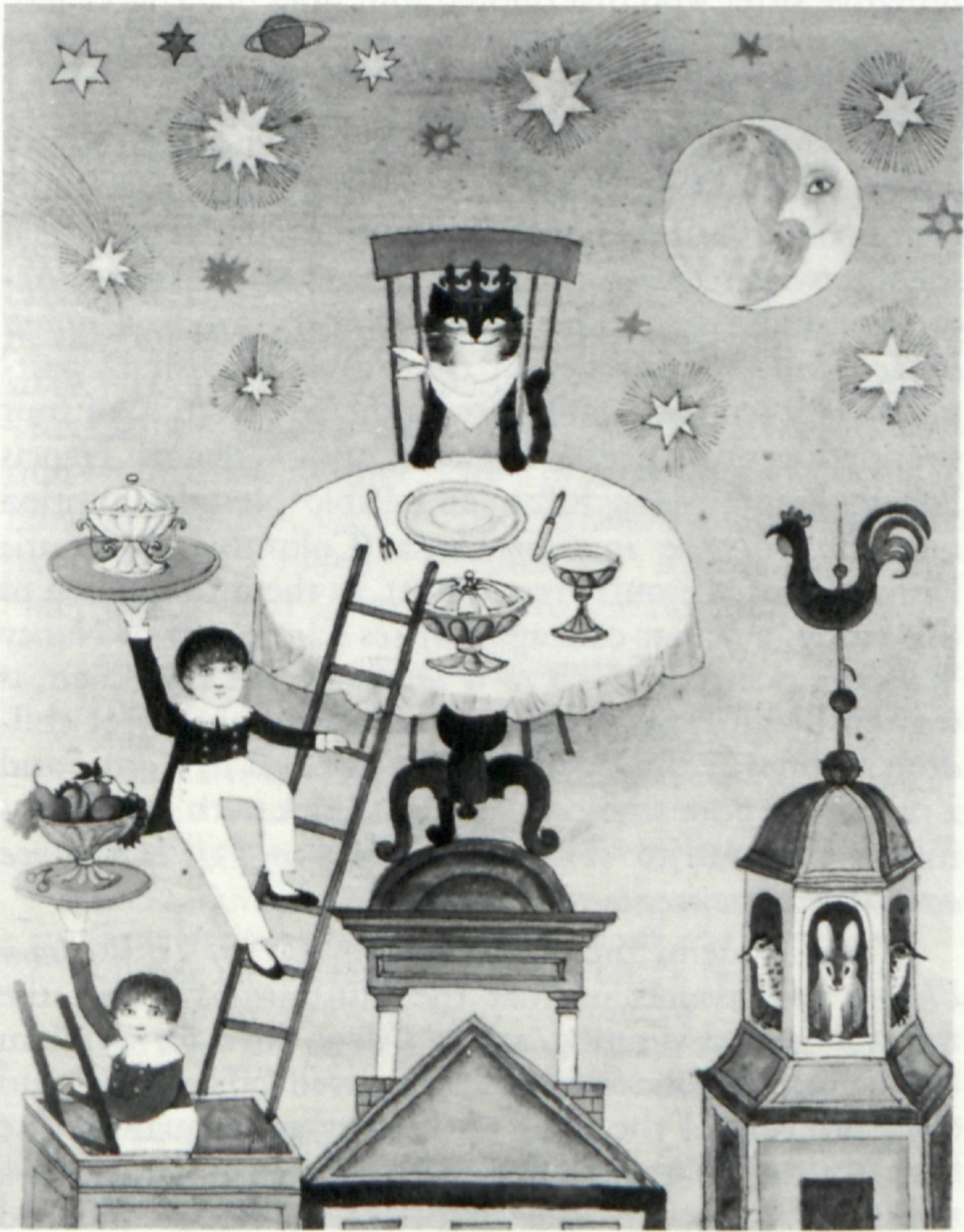 creation and sent me off to enjoy the collections of his Punch cartoons. Every child or adult who has seen my copy of A Visit to William Blake’s Inn commented favorably on the charm of the illustrations. So, in sum, the illustrations do give pleasure, though that dust jacket blurb still worries me. The illustrations, however pleasing and closely following the text they illustrate, do not reveal very obviously “a deep love for William Blake and the London in which he lived.”

However, they lead one to Nancy Willard’s poems which do have charm and imagination and a final, appropriately-cited, Blakean message from The Marriage of Heaven and Hell which one hopes readers of all ages will take to heart: “He whose face gives no light will never become a star.” The title and subtitle of the book lead one to expect a close connection with Songs of Innocence and Songs of Experience, but Nancy Willard’s “Poems for Innocent and Experienced Travelers” are peopled with dragons, rabbits, a shaggy old bear, a lunatic cat, a King of cats, a wise cow, rats, and pigeons which are disconcertingly unBlakean to me. However, one is pleased to encounter the tiger and lambs which are appropriately Blakean.

The Willard poems amiably call to mind a number of writers other than Blake. “Blake’s Wonderful Car Delivers Us Wonderfully Well” with a driver whose cap is labeled “Blake’s Celestial Limousine” (p. 17) reminds one of E. M. Forster’s “The Celestial Omnibus.”2↤ 2 Edward Morgan Forster, “The Celestial Omnibus” and Other Stories (London: Sidgwick and Jackson, 1911). There is also the anomaly of William Blake having a limousine. In the Supplement to the OED, the earliest known usage of “limousine” is recorded from 1902. Both the poems and the illustrations seem to me quite happily to depict this time rather than a full century earlier. “Blake Leads a Walk on the Milky Way” (pp. 32-33) is like Rudyard Kipling’s “The Cat Who Walks by Himself,” and when “The Man in the Marmalade Hat Arrives” (p. 22) in the middle of March, one definitely feels as if one were in the wrong fantasy and about to encounter Alice at any moment. (Indeed, there are two little girls who make their first appearance in the illustrations in this poem.) The Marmalade Man reappears in “The Marmalade Man Makes a Dance to Mend Us” (p. 36), which runs:

Tiger, Sunflowers, King of Cats,
Cow and Rabbit, mend your ways,
I the needle, you the thread
follow me through mist and maze:

Fox and hound go paw in paw.
Cat and rat be best of friends.
Lamb and tiger walk together.
Dancing starts where fighting ends.

This seems to me an excellent marching song for innocent and experienced travelers.

There are at least two of Nancy Willard’s poems which are clearly modeled on William Blake’s Songs. In “The Tiger Asks Blake for a Bedtime Story” (p. 40), the reader familiar with Blake will think of “The Tyger” and “A Poison Tree”:

begin page 37 | ↑ back to top Also, “Two Sunflowers Move Into the Yellow Room” (p. 28) is clearly modeled on Blake’s “Ah! Sunflower.” The sitter’s gift of Blake’s Songs to a very young Nancy obviously took root in her imagination and poetry.

The result of this implantation is a children’s book of much charm in verse and illustration. It also bids us to make comparisons with the Songs of Innocence and of Experience, and I hope future sitters and friends of ailing and healthy responsive young children will be as wise as Nancy Willard’s Miss Pratt and produce William Blake’s verses for them. A Visit to William Blake’s Inn well illustrates the value of an early introduction to the Songs. Scholars and admirers of Blake should be very grateful to Nancy Willard for her admirable demonstration that Blake’s Songs should be brought out of the study and put into the libraries of the young.