Reviewed by V. A. De Luca

The rich, gentle farmland surrounding Stratford, Ontario, and its famed Shakespeare festival might pass as a reasonable facsimile of the restored “green & pleasant Land” of Blake’s vision. In the summer of 1983 a living facsimile of Blake himself might be found there, aptly chanting the lyric “And did those feet. . . .” The occasion was the Stratford Festival’s production of a one-man play Blake: Innocence and Experience, with the distinguished Canadian actor Douglas Campbell in the title role. Campbell achieved a remarkable physical likeness and delivered the many Blakean passages in his script with eloquence, force, and clarity. Indeed there was much in this production to beguile the eye and ear. But all through it admirers and students of the poet would have done well to be on guard. Stratford, Ontario, after all, is not England’s green and pleasant land, and this Blake is not Blake.

The play makes a nice first impression, as Blake enters his workshop, outfitted with the frock coat, broad hat, and lantern of Los in the frontispiece of Jerusalem. The simply-furnished thrust stage includes a fine period recreation of an engraver’s work table. In these convincing surroundings for the next hour and a half Campbell/Blake rambles, reminisces, and recites. He even sings, for there are lovely melodies (composed by Loreena McKennitt[e]) accompanying some of the Songs of Innocence and standing 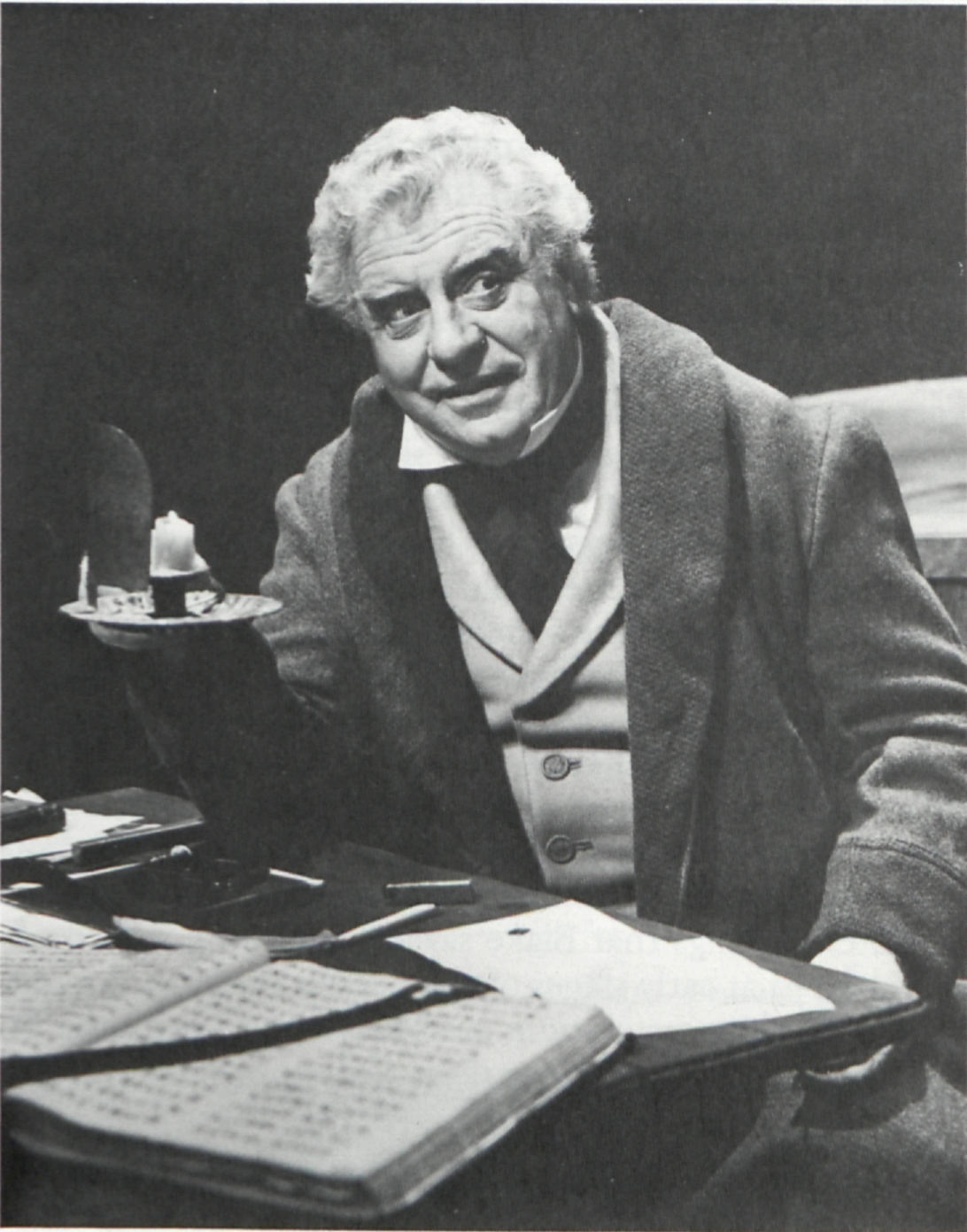 Douglas Campbell as William Blake.   Photo by Robert C. Ragsdale. Courtesy, Stratford Festival of Canada.
in for the lost tunes that Blake is said to have actually composed. Campbell’s Blake is, in the first act at least, cheerful, reflective, and given to quiet recollective musing. As he putters about the workshop, he becomes a loveable eccentric, a Dickensian “character.” What one misses here is Blake’s awesome tone of authority, of a passion that arises not from personal eccentricity but from an impersonal commitment to truth. Passion flares in the second act, during a long medley composed of passages on political revolution, but, as directed by Richard Monette, Campbell’s reading gives to the passion more than a little hysteria; attention is thus deflected from the political content of the text to the private frenzy of the bard. Not all of this need be faulted. If we are presented an image of a smaller, more daunted Blake than the one that comes through his works, we should not rule out utterly the possibility that this image captures some actual biographical truth.

An accurate picture of Blake, however, cannot emerge out of an inadequate representation of what he wrote, what he meant, and what was important to his life. Here the playwright Elliott Hayes bears a heavy burden of responsibility. His text is largely an achronological pastiche of passages from Blake’s writings, loosely arranged, begin page 162 | ↑ back to top as the subtitle suggests, on the scheme of Innocence and Experience (which is to say that the lighter matters go mostly in the first act and the heavier in the second). Pastiche and disregard for chronology are virtually inevitable in a biographical monodrama that must be squeezed into a mere hour and a half, but they impose on the dramatist a special need for care in the selection, arrangement, and emphasis of his materials. How well Hayes has fared in this regard may be gauged from the many Blakean lines that he has reset in false contexts. For instance, when Blake exclaims, “O rose thou art sick,” he is not addressing himself on the subject of his final illness; “A Poison Tree” is not a personal confession of his envious disposition, nor is the “foe” of that poem Sir Joshua Reynolds; when he speaks of exploring “the secrets of the vegetable world,” he does not mean that he likes taking long nature walks.

The playwright’s treatment of Blake’s texts seems as capricious at times as his juggling of their contextual settings. In a presentation of “London,” for example, Hayes relies entirely on the Notebook draft, ignoring the authority of the final etched version. Furthermore the Hayes text conflates readings that Blake saved for etching with readings deleted at early stages of the poem’s drafting. Among Hayes’s dubious restorations are “dirty” (in place of the famous “charter’d”) and the earliest of three rejected try-outs for the fourth stanza:

But most the midnight harlot’s curse
From every dismal street I hear,
Weaves around the marriage hearse
And blasts the newborn infant’s tear.

Left unexplained is the playwright’s decision to edify his Stratford audience with these inchoate beginnings rather than the imperishable lines that Blake himself chose to print and reprint for half a lifetime.

A nineteenth-century aura hangs over this production. The Blake of Elliott Hayes is essentially Gilchrist’s Blake. Many of the charming though dubious old anecdotes are here—William and Catherine playing Adam and Eve, Blake swept away by the mob in the Gordon riots—and most of the biographical data presented in the play come from Gilchrist’s early chapters (very closely paraphrased in some spots). The result is a skewing of biographical emphasis, for the really key events in Blake’s life are simply left out. There is room for Blake’s boyhood encounter with Goldsmith, for his participation in the opening of the tomb of Edward I (a mere conjecture in Gilchrist here turned into fact), and for his courtship, but no mention of Hayley or the three years at Felpham, no failed exhibition of 1809, no Ancients, and, most astonishingly, considering its inherent drama and its theatrical potential, nothing of Schofield and the sedition trial at Chichester (one begins to wonder how far Hayes actually read in his biographical sources). In artistic and intellectual matters, the situation is much the same. There is a reasonably good representation of Blake’s views on art, but not a word in the play about illuminated printing. There are random passages about “vision,” a dash of libertarian politics, but nothing on Bacon, Newton, and Locke, no doctrine of contraries, no allusion to Blake’s mythic cosmos or even to his interest in myth making. Hayes nearly redeems himself by reserving to a climactic point the great passage from Milton, “I come in self-annihilation and the grandeur of Inspiration” (splendidly rendered by Campbell), but this “nearly” is not good enough, coming as it does after such extended thinness of substantive content.

Hayes, who is a member of the Stratford Festival staff, received his commission to write Blake from the Festival itself. This then is very much an in-house script, which raises an important point. Stratford is Canada’s major classical theatre and an international tourist attraction. Many people come to see its plays who have never seen any other live drama. We can only be grateful therefore that it has chosen to celebrate Blake and to make him known to its audiences in an engaging performance. At the same time, however, the Stratford Festival bills itself as an important educational resource, for which it is handsomely subsidized by the Canadian and Ontario governments. In what is essentially a documentary dramatization, it has an obligation to provide accuracy and substance as well as entertainment. Instead Blake gives us charm and eloquent locution, and along with these, trivia, avoidance of substance, and garbled texts. If this play comes to your neighborhood, see it but take care to warn students.

A text of the play is published by Echo Hill Ltd., Stratford, Ontario (1983), and is available from the Stratford Festival.