It has long been suggested that there is a line of development from Blake, through the Ancients, to a school of British artists working in relatively isolated conditions during the Second World War. Such a development was spelled out by examples in a section preceding the main exhibition of Blake’s work held at the Tate Gallery in 1978 and was at least in part the argument of the exhibition under begin page 163 | ↑ back to top review. The first section, of thirty-two works, included examples of Blake’s illustrations to Thornton’s Virgil, prints by Linnell, Calvert and Samuel Palmer, by whom there was also a sepia drawing, and a further group of prints ranging in date from 1913 to the 1930s by artists such as F.L. Griggs, Robin Tanner, Paul Drury and Graham Sutherland. In some cases the feeling of continuity arose more from details of technique than from overriding mood or purpose, but in a general sense a reevocation in the early twentieth century of the aspect of Blake’s late work particularly influential on his followers could be seen.

The second section of the exhibition, eleven works under the heading “Emergence of a New Style,” spelt out the continuation of this development in further, more mature works by Sutherland together with a group by John Piper and examples of the work of other artists; Paul Nash’s surrealist works were mentioned in the introduction to this section but were not represented in the exhibition itself. John Piper’s works introduced a new element in British twentieth-century neo-romanticism, the influence of J.M.W. Turner; his name, together with that of Caspar David Friedrich, was indeed mentioned in the introduction to the first part of the catalogue. 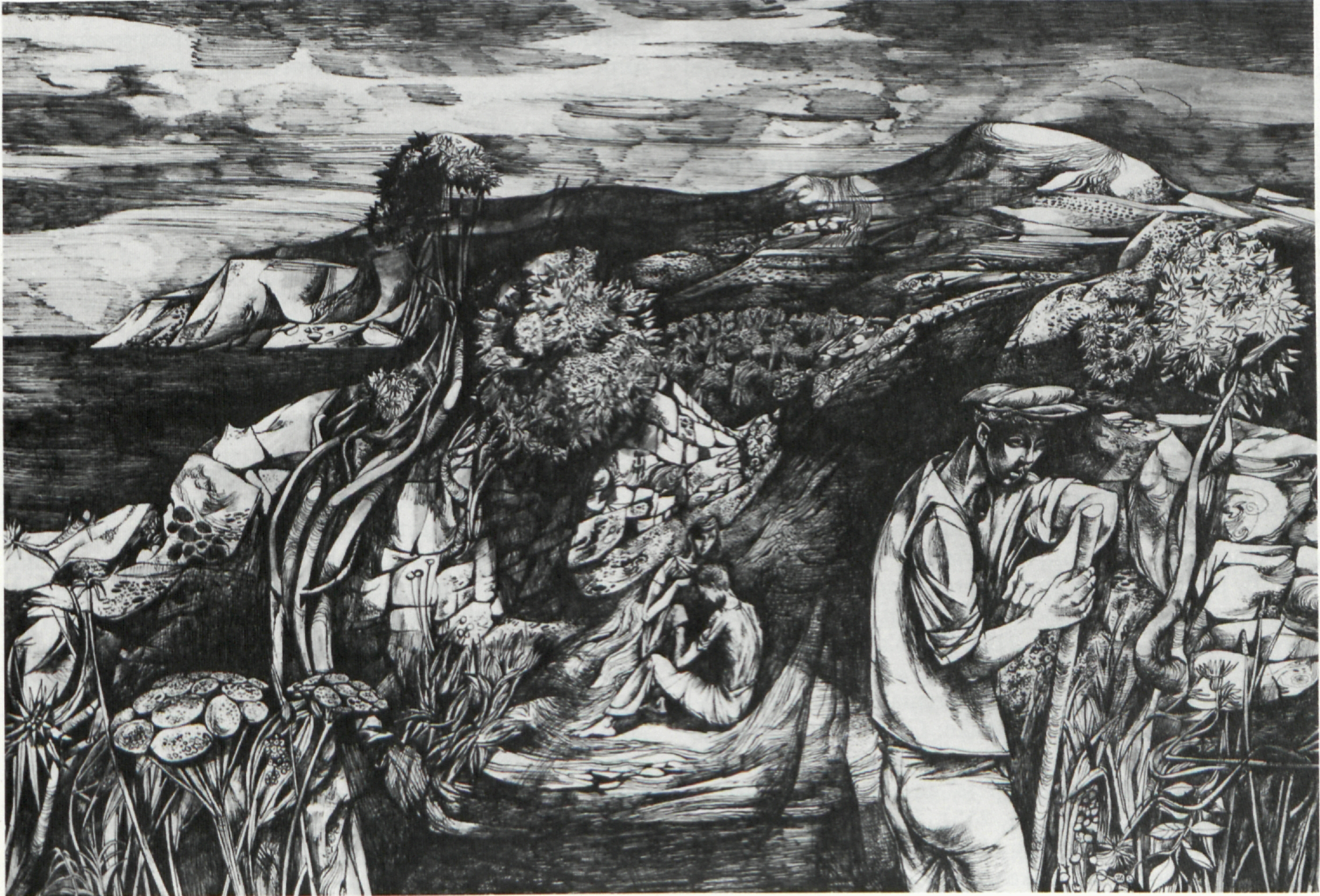 The main body of the exhibition, entitled “The Flowering of Neo-Romanticism,” consisted of sixty-eight works by a fairly homogeneous group of artists including Michael Ayrton, John Minton, John Craxton, Keith Vaughan, Robert Colquhoun, Robert MacBryde, further works by Piper and Sutherland, Ceri Richards, Bryan Wynter, William Scott, David Jones and others. Francis Bacon and Lucien Freud had, apparently, refused to allow themselves to be represented. In many works the visionary tradition of Blake could be seen in one way or another. The monochrome drawings of Minton and Craxton clearly pursued the development in engraving of the nineteenth- and twentieth—century examples earlier in the exhibition. Works by Sutherland, Richards and Vaughan combined text and design in a way that could perhaps be traced back to Blake, though here there is also a strong French influence; in fact in many of these artists the example of Picasso was as strong as that of any local British artist. David Jones, unfortunately represented by a single work only, was perhaps the artist most akin in spirit to the tradition. Other claimants, such as Cecil Collins begin page 164 | ↑ back to top (who was represented, if only as a result of pressure from my colleagues, in the Tate display), were not included. On the other hand “Suburban Garden” of 1947 by Victor Pasmore, painted shortly before his conversion to abstraction, seemed alien to the whole spirit of the exhibition.

The exhibition clearly suffered not only from the abstention of Bacon and Freud but also from the exigencies of what works happened to be available for loan at the time. What is now needed is a far more thorough examination of how far, and in what precise respect, twentieth-century artists can be said to have returned either consciously or unconsciously to the imaginative landscape and figurative tradition established by Blake and Palmer, and, alternatively, how much of this can be seen as an independent line of descent from the tradition established by Turner, whose influence is already apparent in the later works of Palmer and Linnell. That there is some continuity is now clearly apparent, thanks to exhibitions such as this.