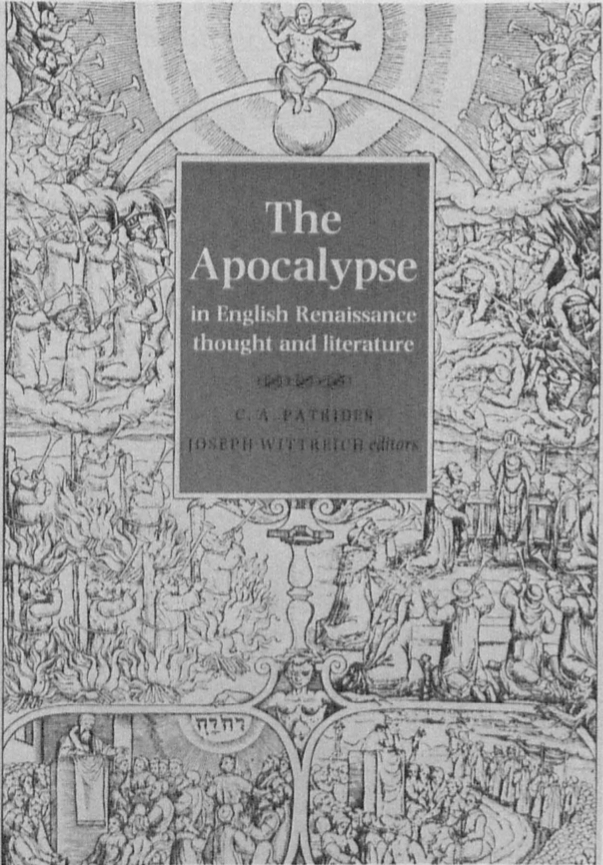 Any student of Blake must perforce be interested in the Apocalypse and in its role in the culture of Blake’s time. Although this collection of essays is far broader in scope, beginning with the early Church Fathers and concluding near the end of the nineteenth century, it provides a perspective in which we can view Blake’s apocalypticism not as isolated and unique but as participating in a tradition that goes back at least to the Book of Daniel in the Old Testament. The reader who wants to take such a Blake’s-eye view of the subject might do well to begin with the book’s concluding essay, M.H. Abrams’s “Apocalypse: Theme and Variations” and then to return to it at the end; here, as in Natural Supernaturalism, Abrams is concerned with the manner in which Blake and some of his contemporaries transformed biblical hermeneutics into personal poetic statements with immediate applications to history. Thus essays like the two opening ones in The Apocalypse may have no immediate reference to the Romantic period and yet be full of implications about it.

The initial essay, “Early Apocalypticism: The Ongoing Debate” by Bernard McGinn, declares the necessity “for a synthetic view as the proper background for detailed study of special epochs and topics,” and McGinn’s discussion is itself a masterful contribution towards such a view. The apocalyptic genre is defined as a revelation by an angel to a usually pseudonymous recepient, a message encoded in visionary symbols to be written down. The rise of apocalypticism is traced to the Judaism of the third and second centuries B.C., and the apocalyptic elements of the New Testament are briefly described. McGinn also demonstrates the extent to which the chiliastic nature of Christianity was fully accepted by early Church Fathers such as Irenaeus, Tertullian, and Lactantius, all of whom believed in the coming thousand-year reign of Christ on earth. It was Augustine who, rejecting his own earlier view, made the idea of the millennium, once an article of faith, a matter of controversy.

There were nevertheless always those within the Church who attempted to re-establish the thousand-year reign as a central doctrine. The medieval manifestations of such attitudes are the subject of Marjorie Reeves’s essay “The Development of Apocalyptic Thought.” The structuring of time is particularly important here. In Augustine’s later writings the conception of a world-week of six ages plus a seventh existing outside of time1↤ 1 For a discussion of the world-week with reference to Blake, see my Energy and the Imagination (Oxford: Clarendon Press, 1970), p. 138. was transformed into “a one-directional process” whereby God unfolded His purpose within history. Paul’s doctrine of three phases of salvation (Romans v. 13-15) continued nevertheless to provide a model for millenarian speculation. Joachim of Fiore, to the study of whose thought Reeves has made such an immense contribution elsewhere,2↤ 2 See The Influence of Prophecy in the Later Middle Ages (Oxford: Clarendon Press, 1969) and Marjorie Reeves and Beatrice Hirsch-Reich, The Figurae of Joachim of Flora (Oxford: Clarendon Press, 1972). made the third status the Age of the Spirit and combined it with the Seventh Day of the world-week. The effects of this idea were indeed far-reaching; whether far enough to reach Blake is a subject demanding further investigation.3↤ 3 I do not know whether there may be new material on this subject in two as-yet-unpublished works: a study of the later influence of Joachim of Fiore by Reeves and Warwick Gould and E.P. Thompson’s book on Blake (which, he has informed me, places considerable emphasis on millenarianism).

Following these two rich essays, Jaroslav Pelikan’s “Some Uses of Apocalypse in the Magisterial Reformers” is somewhat disappointing, not for any fault of its own as a specialized contribution to the history of theology but because of the relative lack of importance, remarked upon in some of the other essays in this volume, begin page 54 | ↑ back to top 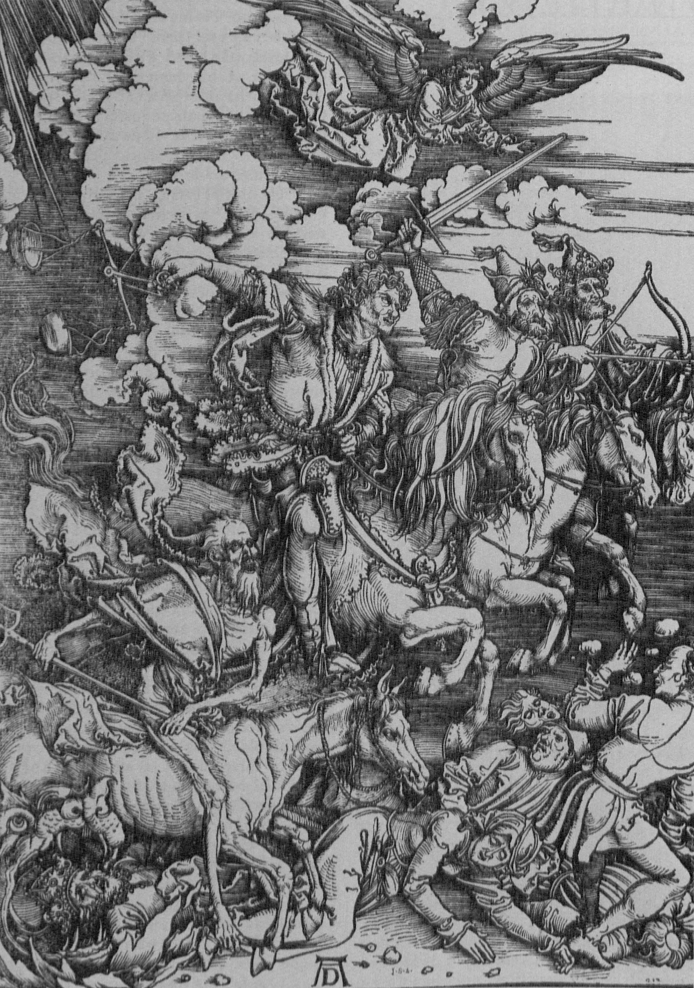 1. Albrecht Dürer.   The Four Horsemen of the Apocalypse, Apocalypsis cum Figuris. 1511. Woodcut. 15⅜×11 in. Henry E. Huntington Library.
begin page 55 | ↑ back to top that Luther and Calvin attached to the Book of Revelation: Luther, as Pelikan himself notes, at one time expressed the view that the Apocalypse did not belong in the Bible at all, and Calvin did not include it among his New Testament commentaries. What Pelikan does show is that Revelation nevertheless played a role in the preaching of both. More valuable in creating a frame of reference for the literary essays to follow is Bernard Capp’s “The Political Dimensions of Apocalyptic Thought.” Capp argues that Foxe’s Acts and Monuments, more commonly known as The Book of Martyrs, along with John Bale’s The Image of Both Churches, inculcated a form of “apocalyptic nationalism” that was to have important consequences for the next century in the millenarian aspect of the English Revolution. The works of Spenser, Shakespeare and Milton that are discussed in Part III of The Apocalypse also show, in varying degrees, characteristics of such an attitude.

“Revelation and the Seventeenth Century” by Michael Murrin, the last essay in Part II, has as its subject the two seventeenth-century commentators most important to literary scholars—David Pareus and Joseph Mede, both of whom have been connected with Milton.4↤ 4 See Joseph Wittreich, Visionary Poetics (San Marino: Huntington Library, 1979). Murrin’s critical approach to Pareus’s Commentary and to Mede’s Key to the Revelation is in some ways puzzling. It may be, for example, that Pareus made “strained act divisions [in Revelation] as with the seals”—but from what standpoint is such a judgment made, and what are its implications? Again, if Mede’s interpretations lack originality as Murrin says, how does this affect our view of Mede? We do not read David Pareus for a “true” exposition of John’s meaning; for that we would go to modern scholars (only to find considerable disagreement despite the use of linguistic and cultural evidence). Mede’s originality lies not in his individual glosses but in the idea of synchronicity as applied to John’s visions. No author is beyond criticism, but it seems centuries late to concentrate on the problems these two had in their approaches to their chosen text.

The heart of The Apocalypse is Part III, where Florence Sandler begins by arguing cogently that the Legend of Holiness in The Faerie Queene is patterned after Revelation. Many of Sandler’s statements about Spenser’s typology seem equally applicable to Blake’s in his later works. This is of course not surprising, considering the interest in Spenser evidenced by Blake’s Characters in Spenser’s Faerie Queen (National Trust, Petworth). Nor need we hypothesize about Blake’s sense of engagement with Joseph Wittreich’s subject in “‘Image of that Horror’: The Apocalypse in King Lear.” Positing a “poet’s revelation” different from the theologians’ in that Shakespeare’s goal is “to turn responsibility for the shaping of history over to man and thereby secularize the Christian prophecy,” this finely considered essay makes us think once more of Blake. C.A. Patrides treats of the most important English poet of all to Blake in his “ ‘Something like Prophetic[e] Strain’: Apocalyptic Configurations in Milton.” In opposition to Michael Fixler’s view that “Milton based Paradise Lost on an elaborate systematic transformation of the Apocalypse or Revelation of St. John,”5↤ 5 “The Apocalypse within Paradise Lost,” New Essays on Paradise Lost, ed. Thomas Kranidas (Berkeley and Los Angeles: Univ. of California Press, 1969), pp. 131-78. Patrides sees the apocalyptic content as projected into the pretemporal realm of the War in Heaven in Book VI. Nevertheless, Patrides recognizes the apocalyptic structuring of history according to typological patterns as “descriptive of the strategy at the heart of Paradise Lost” (and, one might add, of Blake’s Milton as well).

In Part IV we begin to approach Blake’s era or at least its background with Paul Korshin’s “Queuing and Waiting: the Apocalypse in England, 1660-1750.” Korshin begins with a brief but informative consideration of some later seventeenth century figures, most notably the Behmenist Jane Lead, whose writings continued to be studied in millenarian circles a century later.6↤ 6 See Désirée Hirst, Hidden Riches (London: Eyre & Spottiswoode, 1964), p. 260. Curiously, there is no mention of Thomas Beverley, who is too important a figure to be left out, as he was a prolific millenarian writer—the bibliography of this book lists eleven titles published in the decade beginning 1684—at a time when the Commonwealth flood of apocalyptic tracts had subsided to a Restoration and then post-Restoration trickle. Even more curious is the manner in which the essay appears gradually to adopt the attitude of the millenarians’ critics and enemies. One expects to find A Tale of a Tub and The Dunciad discussed here, but it is surprising that the view of the satires is assumed by the author as well: “Swift pays special attention to certain aspects of millenarian behavior—sexual licentiousness, glossolalia, visionary experiences, madness. His gaze is almost medical, as if the fanatic were a patient in an asylum (as, no doubt, some of them were) and he were the physician writing a case history” (p. 259). Such a remark as this recalls the bad old days typified by Hoxie Neale Fairchild’s Religious Trends in English Poetry, where all forms of Dissent are viewed as deviations from an implied norm. There is, moreover, another omission of an important writer on apocalyptic subjects, in this instance Richard Roach, who assumed leadership of the Philadelphian Society from Jane Lead. As Roach’s works do not appear in the bibliography, they should be mentioned here: The Great Crisis: or, the Mystery of the Times and Seasons Unfolded (1725) and The Imperial Standard of the Messiah Triumphant (1727).

There is unfortunately no essay to link the mid-eighteenth century to the Romantic period in this book, and consequently the early Swedenborgian milieu in England is left undiscussed, as are the writings of Richard Brothers, Joanna Southcott, and their respective followers. The American side of the subject is, however, thoroughly presented by Stephen Stein in “Transatlantic Extensions: Apocalyptic in Early New England,” beginning begin page 56 | ↑ back to top with the Puritans of the first generation and extending to the aftermath of the American Revolution. Most pertinent, perhaps, for one interested in speculating about Blake’s connection with this subject is the Great Awakening. Could Blake in calling his Milton “the Awakener” have had in mind the Awakening in America? Blake must have known that George Whitefield, whom he praises in Milton, had a prominent role in the latter part of this phenomenon.

The post-Romantic period is the subject of two important essays in The Apocalypse. Mary Wilson Carpenter and George P. Landow center their exposition of the Apocalypse in Victorian literature upon George Eliot, remarking that Eliot’s fascination with the fulfillment of Revelation is related to a renewed sense of the importance of this subject among contemporary intellectuals. The latter part of their essay argues that in Romola Eliot structures her novel according to a sevenfold division based on Revelation. Last before Abrams’s fine Omega comes “The Millenarian Structure of The Communist Manifesto” by Ernest L. Tuveson, whose Millennium and Utopia (1949) remains a classic study of millenialist thought. Tuveson’s thesis that the communism of Marx and Engels involves a displacement of religious belief is familiar, but his application of this view to the Communist Manifesto succeeds in bringing out some striking parallels between Engels’ document and John’s.

One might wish for a full-fledged index rather than a scant “Index nominum” to this book, but the elaborate and extremely helpful bibliography compiled by Wittreich deserves the last word. Divided into commentaries on/interpretations of Revelation (arranged chronologically) and ancillary reading (alphabetized), this section of some seventy pages will be helpful to scholars for a long time to come—as, indeed, will this entire book.