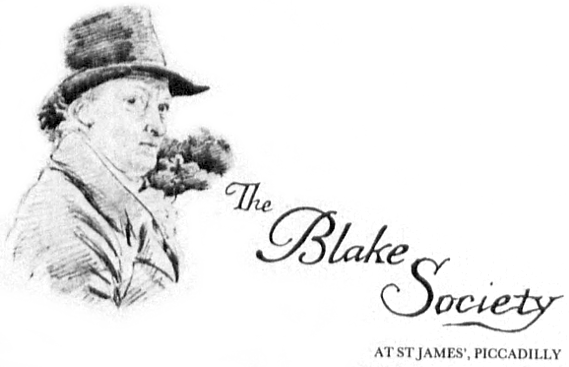 As one of the speakers remarked on the evening of the inauguration of the Blake Society, poor William Blake’s shade must be contemplating rather ruefully the formation of a Society to his honor within the portals of a church of the authorized Church of England (and the Society’s future plans include a “Blake” stained-glass window). He need not fear, however, since the place of his baptism is now opened up to reveal the infinite which was hid. Under the enthusiastic arts management of Peter Pelz, St. James’ church has become home for a wide variety of activities and interests extending far beyond Blake to cover current theology, sociology, and politics (Norman Tebbitt, the British Cabinet’s Dracula lookalike / thinkalike, was a recent speaker). St. James’ is looking to its heritage, and it is natural that it should recognize Blake as one of its most celebrated alumni.

At the Inaugural Event held in May 1986 there were two main lectures held over the three days, one by Bishop John Taylor on “Blake’s God” and one by Professor David Erdman on “Blake the Satirist,” but other activities included two plays by Oliver Parker in addition to readings, musical settings, and films. The inaugural evening itself was something of a revelation with the whole of the ground floor of the church being packed out with enthusiasts of all ages and showing, once again, that interest in Blake extends far beyond the world of scholarship and the academy.

The Blake Society hopes to commission and promote new art, music, and drama inspired by Blake as well as to publish, in conjunction with Essex University, an annual lecture. The Society is already busy planning events for the autumn of 1986 and has Northrop Frye, Stanley Gardner, and Morton Paley lined up to lecture in 1987.

Naturally the Blake Society would welcome financial contributions to support its various programs and £15 has been suggested as an annual subscription (British taxpayers should write to request a deed of covenant form to increase the sum that this Registered Charity actually receives). The Society stresses, however, that payment of the subscription is purely for those who can afford it and should not bar anyone from attending and contributing to the Society’s events.

If the opening events are anything to go by, the Blake Society at St. James’ should be a lively umbrella organization for both the scholarly and the popular interest in Blake, and it is the latter which might prove more significant in the long run.