When Blake came, later in life, to reengrave his youthful line engraving of Joseph of Arimathea, he added inscriptions which gave it a title, a provenance and an allegorical meaning. The title he engraved in the top right corner, and the provenance he acknowledged beneath the design: “Engraved by W Blake 1773 from an old Italian Drawing . . . Michael Angelo Pinxit.” Blake’s figure of Joseph derives from an unidentified figure in the bottom right corner of a fresco in the Pauline Chapel entitled “The Crucifixion of St. Peter.” We do not know if Blake could also have seen a drawing or engraving of Michelangelo’s The Deposition, but the figure helping the two Marys to support the fallen Christ—a figure which is very similar to Blake’s—is in fact Joseph of Arimathea.1↤ 1 Charles De Tolnay, The Art and Thought of Michelangelo (New York: Pantheon Books, 1964), p. 79.

The allegorical meaning of the coming of Joseph of Arimathea to Britain Blake gives in his inscription: “This is One of the Gothic Artists who Built the Cathedrals in what we call the Dark Ages / Wandering about in sheep skins & goat skins of whom the World was not worthy/such were the Christians/in all ages. . . .” As David Bindman points out, “His rocky isolation and the grimness of his mission, as the inscription makes clear, are also emblematic of the fate in all ages of the artist, who brings the divine message to an unworthy world, yet is sustained by the light of Eternity, hinted at in the background.”2↤ 2 David Bindman, William Blake: His Art and Times (Yale Center for British Art and The Art Gallery of Ontario, 1982), p. 68. There is, however, another allegory in Blake’s engraving, related not to the inscription but to the visual context. For Blake took an unidentified figure out of the crowded context of “The Crucifixion of St. Peter” and placed it on Albion’s Ancient Druid Rocky Shore, and in so doing placed the figure into the context of the visual image of the British Druids which had been built up during the eighteenth century.[e]

The eighteenth-century antiquaries composed their histories of the British Druids from the writings of the classical authors, from later traditions about the Druids, and from a goodly portion of purely imaginative speculation and inference. Aylett Sammes included a drawing depicting a Druid as a bearded sage in his Britannia Antiqua Restaurata, published in London, 1676. This was copied by Henry Rowlands in 1723 in his Mona Antiqua Restaurata—whose title alone betrays Rowlands’ debt to Sammes—with small alterations. The Druid’s feet now are shod in sandals; the book of ancient lore becomes a branch of the sacred oak; and prehistoric circular huts adorned with rather gothic spires now dot the background. The background was altered slightly when it was reengraved for the second edition, published in 1766 (illus.). There was a copy of Sammes’ Britannia in the library of William Stukeley3↤ 3 Stuart Piggott, William Stukeley: An Eighteenth Century Antiquary (Oxford: Clarendon Press, 1950), p. 121. and Stukeley’s rendition of a Druid sage was drawn in February 1723-24, and thus just after the publication of Rowland’s Mona. It was published as the frontispiece to Stonehenge, A Temple restored to the British Druids (1740), which we can be fairly certain Blake knew. Stukeley’s figure again shows minor alterations—he has a shortened beard and a bronze age axe at his belt. His left hand no longer holds an oak branch, but he is standing beneath an oak tree. The background now contains barrows and a hill-fort appropriate to the Wiltshire downland. The most obvious difference, of course, is the reversal of the direction in which the head is turned.

A comparison of these renditions with Blake’s shows many remarkable similarities. In all cases, the general stance and dress are very much alike, as is the expression on the face. Unlike the Druids of the antiquaries, however, Blake’s Joseph bears no symbols of power or authority. Similarly, his clothing barely covers his muscular body as he stands by the cold sea against a background of dreary rocks from behind which the rays of the sun barely escape. Unlike the Druids of the antiquaries, he has no warm clock, no sandals, no rolling hills and established settlement behind him.

To Bindman’s assessment of the allegory of Joseph as artist, therefore, we must also add the significance of the Druid context for the engraving. Blake had received from the antiquaries—notably from Stukeley but very likely from others as well—particular ideas about the nature of the Christianity of ancient Britain. The eighteenth-century antiquaries speak of an original patriarchal religion which was the result of the divine knowledge and language given to Adam before the Fall. Adam communicated this knowledge to his posterity, and it was preserved by Noah and his sons after the Flood. The first inhabitants of Britain were Druids, by virtue of the begin page 48 | ↑ back to top 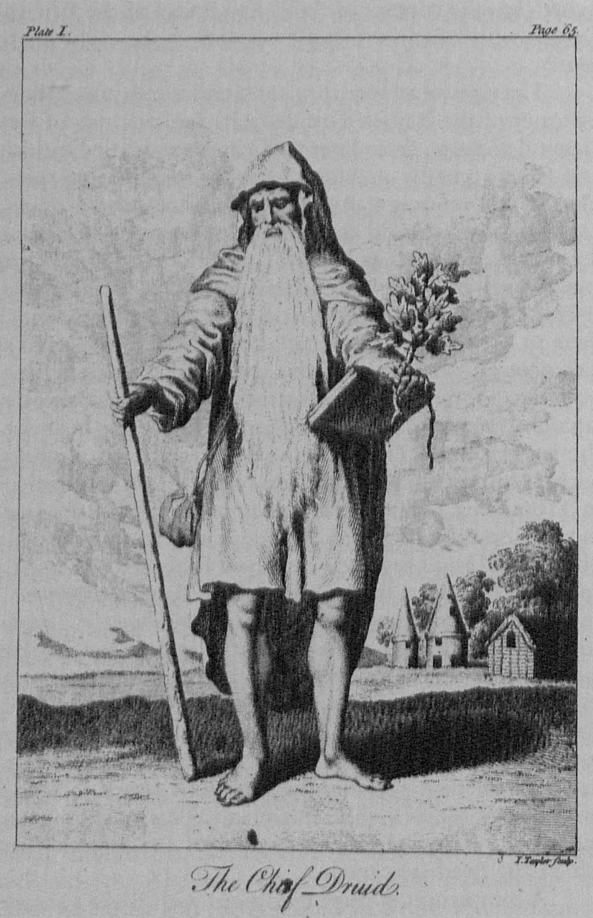 so near in descent to the fountains of true religion and worship as to have one of Noah’s sons for grandsire or great-grandsire, and may be well imagined to have carried and conveyed here some of the rites and usages of that true religion, pure and untainted in their first propogating of them: though I must confess they soon after became, as well here as in other countries, abominably corrupted, and perverted into the grossest heathenish fictions and barbarities.4

William Stukeley, as a good shepherd of the Church of England, was as greatly alarmed by the rise of Deism in eighteenth-century thought as Blake was later to be. His response was to develop ideas of a “natural” patriarchal religion that was strongly Christian. He wrote that the first Druids in Britain, who came “soon after Noah’s flood” were “of Abraham’s religion intirely” and that they may have had “a knowledge of the plurality of persons in the Deity.”5↤ 5 Quoted Piggott, p. 119. Because they were isolated in Britain, they maintained the true traditions of the patriarchal religion intact, and he says that this religion “is so extremely like Christianity, that in effect it differ’d from it only in this; they believed in a Messiah who was to come into this world, as we believe in him that is come.”6↤ 6 P. 120. He wrote in the preface to Stonehenge that “My intent is (besides preserving the memory of these extraordinary monuments, so much to the honour of our country, now in great danger of ruin) to promote, as much as I am able, the knowledge and practice of ancient and true Religion; to revive in the minds of the learned the spirit of Christianity. . . .”7↤ 7 P. 128.

By the time Blake conceived the idea of reengraving his youthful attempt, he must have been aware at least of Stukeley’s Stonehenge, and possibly of his two sources, themselves important writers on the British Druids. By using a figure that was so like their image of the enlightened Druid priesthood, Blake put his Joseph into the context of ancient British history and made him a British Druid. Joseph of Arimathea’s mission is grim and the rocks on which he stands are barren because the primal Christianity of the land to which he comes alone and with empty hands has degenerated into a state of human sacrifice and corporeal rather than mental war. The Christianity which Blake’s Joseph brings, embodied in the imagination of the artist, thus represents the forgiveness of sins given again to a land which had known and forgotten it.