A New Blake from his Apprentice Years? 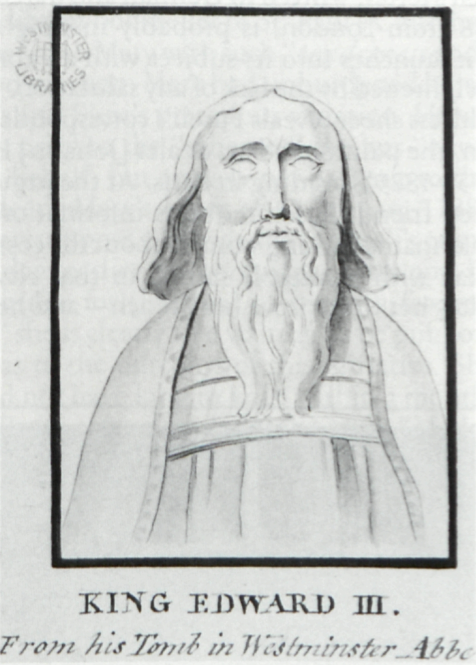 It is not often that one finds what seems to be a genuine work by the artist in whom one specializes in one’s own local library. However, thanks to Margaret Swarbrick and her colleague John Sargent in the Archives and Local History section of the branch of the Victoria Library in the Buckingham Palace Road, London, my attention was drawn to a pen and wash drawing of the head and shoulders of King Edward III from his tomb in Westminster Abbey, part of the Gardner Collection housed there.1↤ 1 Box 54, no. 25C (on a mount with five other works not by Blake). Pen (indian ink) and grey wash, image 3¾ × 3 3/16 in. (9.5 × 7.8 cm.), framing line 4½ × 3 13/16 in. (11.5 × 8.1 cm) on paper 5 5/16 × 3 13/16 in. (13.4 × 9.7 cm.). This admittedly immature and rather crude work has sufficient points in common with Blake’s early work in pen and wash to suggest that it could be a particularly early example, and it is of course related to two drawings of the same subject already attributed to Blake. Among the group of drawings from Basire’s workshop done in preparation for Richard Gough’s Sepulchral Monuments in Great Britain, now in the Bodleian Library at Oxford, is a view from above of the tomb of Edward III with the whole of his effigy and a drawing of the King’s head and shoulders in an oval, as well as a side view of the complete tomb.2↤ 2 Martin Butlin, The Paintings and Drawings of William Blake, 1981, I, 12-13, nos. 42, 43 and 41 respectively, repr. II, pls. 40, 38 and 39; henceforth referred to as B42, 43 and 41, the formula used for the other works mentioned in this article.

There is however no proof that the Victoria Library drawing emanates from Basire’s workshop. Its history cannot be traced earlier than its presence in the vast topographical collection of John Edmund Gardner which was sold in 1910 by his son to Major Sir Edward Coates, Bart., MP, whose executors sold it at Sotheby’s in a series of sales running from 26 February 1923 until 5 May and three subsequent days in 1924. This drawing was in lot 1636 on the eleventh day,3↤ 3 “Tombs of Edward III, and Richard II, drawings, including a large and important drawing of the tomb of Edward III by J. Carter, in water-colour; various engravings, &c,” 43 items. that is 1 May 1924, one of 43 items sold for £1. According to the sale catalogue the Gardner collection consisted of about 50,000 items illustrative of the history of London and was formed over a period of 50 years; where Gardner acquired this drawing is unknown.

One further factor, besides the similarities in general technique to Blake’s early works and his probable association with other drawings of the same subject, is the fact that the drawing can be placed in sequence between the drawing of the figure shown full length, B42, and the finished oval drawing of the head and shoulders, B43. In the new drawing the hair is cut relatively short, leaving a space above the sloping shoulders, as in the full-length drawing; in the finished head-and-shoulders drawing King Edward is given longer, more flowing locks which reach down over his shoulders. The King’s beard, rather spadelike in the full-length drawing, is again much more curvilinear in the finished head-and-shoulders drawing; in the Victoria Library drawing it is shown with much of the curvilinear character of the latter, though it is more freely drawn. This suggests that B42, the full-length drawing, which is closer to the actual tomb, was done first and that B43, the final oval head-and-shoulders drawing, was an idealized head abstracted from that on the tomb to form part of the series of similar portrait heads; the others, all in the Bodleian Library, show Henry III, Queen Eleanor, Queen Philippa, Richard II, and Queen Anne, B22, 25, 40, 46 and 47. In particular the head and shoulders of Richard II, B46, seen slightly from the side as opposed to the direct view from above of the full-length drawing of his effigy lying beside that of his queen, B44, is considerably “improved” and romanticized by Blake. The Victoria Library drawing of Edward III can hardly be called either improved or romanticized but could well have served as a springboard for the splendidly iconic and conceptualized finished head.