If there is in the current fashion for something called history any potential for a genuinely new set of approaches to literary criticism, and for a redefinition of how we go about constructing historical periods, then Jon Klancher’s book deserves attention both as prototype and performance. It may be one of the most important books written on romanticism for a good many years, but its exposition signals such a drastic reconceptualization of what romanticism was that it is likely to remain ignored by those still hooked on the major writers and the more readily memorialized events. While Wordsworth, Coleridge, and Shelley are dealt with substantially and quite brilliantly, Blake and Byron are only briefly mentioned; Keats, Crabbe, and Austen not at all. Klancher is concerned with the “still largely unknown world of text-making” (ix) that he finds in the periodicals, travel diaries, and political tracts of the period. The book is no mere catalogue of the illustrious unread, and indulges not at all in the rhetoric of the “strangely ignored” or the “regrettably unknown.” It proposes “four strategically crucial audiences” as variously addressed and created by non-fictional prose outside the realm of high literature, as we have come to know it: “a newly self-conscious 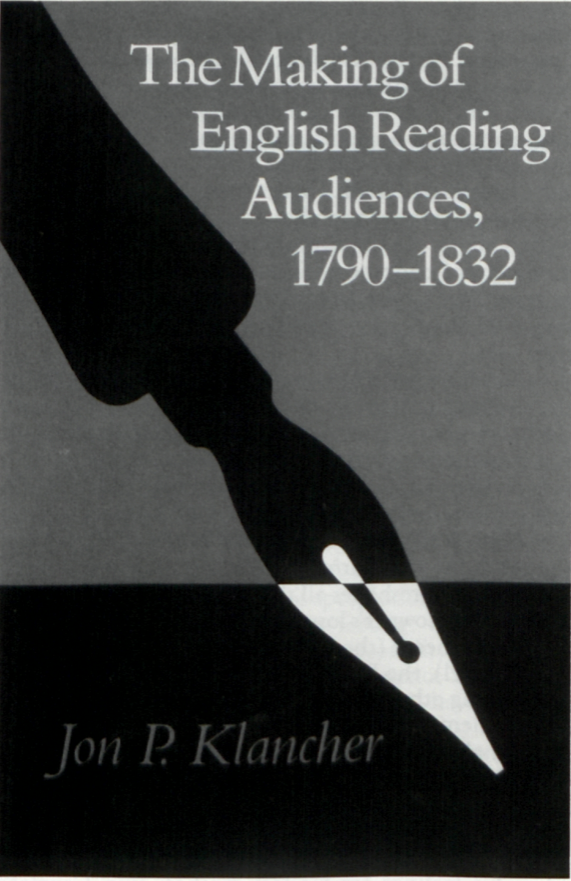 middle-class public, a nascent mass audience, a polemical radical readership, and the special institutional audience—what Coleridge called the clerisy” (4). The new periodical writing, beginning in the 1790s, is seen to dramatize “the discontinuity of publics” (44). There is no assumption of a unitary audience, whether actual or potential; the readership is selected, and selects itself, according to clearly recognized divisions of class and interest. In his convincing demonstration of this state of begin page 171 | ↑ back to top affairs, Klancher should have succeeded in preempting once and for all any easy reference to the reader or the audience, of the kind that features in so much literary criticism, and in almost all reader-response criticism.

Klancher offers no easy overviews about the degree to which these subcultural audiences did or did not exist before they were addressed or created by the tracts and journals here discussed. He suggests that the working class “could not spontaneously generate its own discourse” (101), a common though I think questionable assumption. E. P. Thompson, whose famous title is boldly adapted over into Klancher’s own, would surely want to query this. Klancher is clear that the idea of a radical public was to a significant degree a middle-class idea, the bogeyman of a bourgeois public that was then itself reciprocally reconstituted as “self-consciously dominant” by the radical writers (99). But this book is not, thank goodness, limited by the now fashionable idea of history as a series of merely discursive figments or projections emanating from semiotically enclosed or paranoid imaginations. It is refreshingly distant from the current tendency to read history as “the unfolding of the empire of signs,” and adamant in its belief that “signs constitute strategies in real wars” (7). Equally timely in terms of the present debate within historical criticism is Klancher’s sense of the active function of subjective agency. The fact that a reader is “constructed within a certain audience” does not make him an “automaton.” Quite the contrary: the experience of “colliding social languages . . . demands choice” (12). Along with its distinctly original contribution to the study of romanticism, the book thus also demonstrates against the “postmodern bourgeois liberalism” of Rorty, Fish, and Geertz, and disputes the habit of reading back “our current, sign-saturated condition onto historical cultures for whom the relation of signs to social practice was vastly different from our own” (177).

The specific analyses of tracts and journals are brilliantly incisive. Klancher shows the rhetorical maneuvers by which, for example, James Anderson’s Bee seeks to reconstitute the post-1789 reading public as a body prospectively “without social differences” (24), a society within which every reader may become a writer. Blackwood’s Edinburgh Magazine, founded in 1817, sets itself the task of “imperializing mental energy” (55), refining and extending Anderson’s techniques by its emphasis on “the abstracting power of will” (57). The book does not simply describe the styles and strategies of these various journals and their radical counterparts—The Gorgon, The Black Dwarf, the Political Register, and so forth—but also looks into the circulation figures and the subscriber lists. Discourse and rhetoric do not simply make history, but interact with other forces in the empirical world.

There is one major metaphorical distinction informing Klancher’s account of the perceived differences between radical and liberal-bourgeois models of printed communication: that between “dissemination” and “circulation.” The radical text disseminates, it “propagates principles without circulating meanings” (110). The liberal text, for example that of Arthur Young, also claims principles but employs a “deliberate hesitancy” to persuade its reader to endorse the conclusions that the writer himself pretends to approach skeptically (112-13). Here, “reader couples with writer in a common movement toward hard-won judgment” (113). Dissemination is aggressive, or can be presented that way by its enemies; it floods through “interstices of the social network, into the social cracks of the ancien régime.” Circulation, on the other hand, presents itself as the product of an inductively expanding consensus: “in this motion, a cultural profit accrues. Circulation . . . secretes the reading habit from every pore” (34). When principles and theories disseminate, they can be made to seem to dramatize the distance between writer and reader; the Painite commitment to a common, consensual reason from which such principles emanate can be ignored as the style is made out to be authoritarian. Circulation, on the contrary, explores, suggests, defers, and incorporates, raising no challenges and causing no confrontations.

I am not sure that “dissemination” and “circulation” are quite the most felicitous metaphors for describing what Klancher is talking about here. The first term especially does not quite capture the tone of authoritarianism of which the radicals were accused. There are also moments in his account where Klancher tends to write as if the radical texts really were disseminating in this manner, whereas it makes more sense to me as a description of what their opponents accused them of doing. The presentation of reason as tyranny was the familiar tactic of the conservative and liberal press. Aside from these small problems with emphasis and vocabulary, however, what Klancher is describing is important and suggestive. It helps explain, for example, the various attitudes toward the metropolis characteristic of the period. The radicals were often accused of metrocentrism (my coinage), of using London in the way that the Jacobins were said to have used Paris, as a place from which to disseminate sedition. The circulatory style, conversely, claims a more symbiotic relation between the capital and the provinces, its messages passing through the body of the nation and only picking up meaning as they do so. The drama of the prophetic books, one might say, has to do with the Urizenic attempt to replace circulation by dissemination.

A bit more of the standard sort of historical information might help fill in the picture here. It is my understanding, for example, that it was the radical journals begin page 172 | ↑ back to top that were most often located in the provinces, in the cities and towns of the midlands and the north. They might, then, have operated in more demonstrably circulatory ways than their opponents (with the notable exception of Arthur Young). At these points, Klancher’s fourfold scheme is best treated as a suggestive rather than a definitive paradigm. Its divisions need to proliferate rather than remain. What, for example, was the difference between the provincial and the metropolitan radical journals, between those based in a dissenting rather than an artisan audience? To what degree did they overlap?

Gentle reader, I perceive how patiently you’ve waited: where does Blake fit into this scheme of things? One can see why Blake does not figure much in this book, given the difficulty of characterizing the variety of Blake’s composite art, both verbal and pictorial. But an attentive reading of Klancher’s argument offers some fascinating clues. He shows convincingly that our present interest in the “writerly text” in general has blinded us to the degree to which various romantic writers were seeking to construct specific reading communities through the experience of different kinds of obscurity or difficulty. The ideal reader of Coleridge was invited to emerge from the dark passages of the philosophical sublime into a “spiritual institution” (163) made up of a new aristocracy of mind and soul. Conversely, the style that is marked by a constant “mooring and unmooring of the sign” without ever coming to a point of rest is characterized by Klancher as the property of a middle-class readership marked by “perpetual self-displacement,” by “tirelessly remapping its textual terrain,” and by a “hunger for permanent reinterpretation” (75). This class cannot disseminate, for it has no fixed place, either radical or aristocratic, from which to speak. It cannot stop circulating, for it has no place to come to rest. This model describes not only large segments of the modern literary-critical enterprise but also a host of romantic wanderers, ironists, and skeptics. Blake does not seem to like disseminators: one law for the lion and ox is oppression, even if that law be the law of radical reason. Is Urizen then a parody as much of the radical demagogue as of the reactionary tyrant? Is the Blakean proclamation of the positive power of contraries a formulation of Klancher’s manifold readership? Is there a forseeable end to the wranglings and renominations of angels and devils, or will it go on forever? This book gives us many hints about how to go about building up a new historical vocabulary for understanding Blake, who may well belong to the group which it defines as the “foundational” writers of the period, acknowledging “in the intense friction of their language the pressure of contrary readings and resistant texts” (117).

One could, as always, ask for more. The major omission, in my view, is Klancher’s failure to take account of gender, not because it is now fashionable to take account of gender, but because of the evidence in Richardson, Fielding, Wollstonecraft, Opie, and elsewhere that class distinctions in the readership were also qualified by distinctions between the sexes. These days one complains much more frequently that gender-based accounts take no notice of class, but the point must stand both ways. This is, however, a fine and important book. As one who has himself, in Irony and Authority in Romantic Poetry (London: Macmillan, 1979), made far too much use of a hypostatized “reader” without sensing the limiting and various conditions under which romantic texts had projected or invited that reader, I find Klancher’s book, along with Jerome McGann’s The Romantic Ideology and the long-standing admonitions of my good friend John Barrell, an apt corrective to any residual tendency to worship that “textual hero” (177).