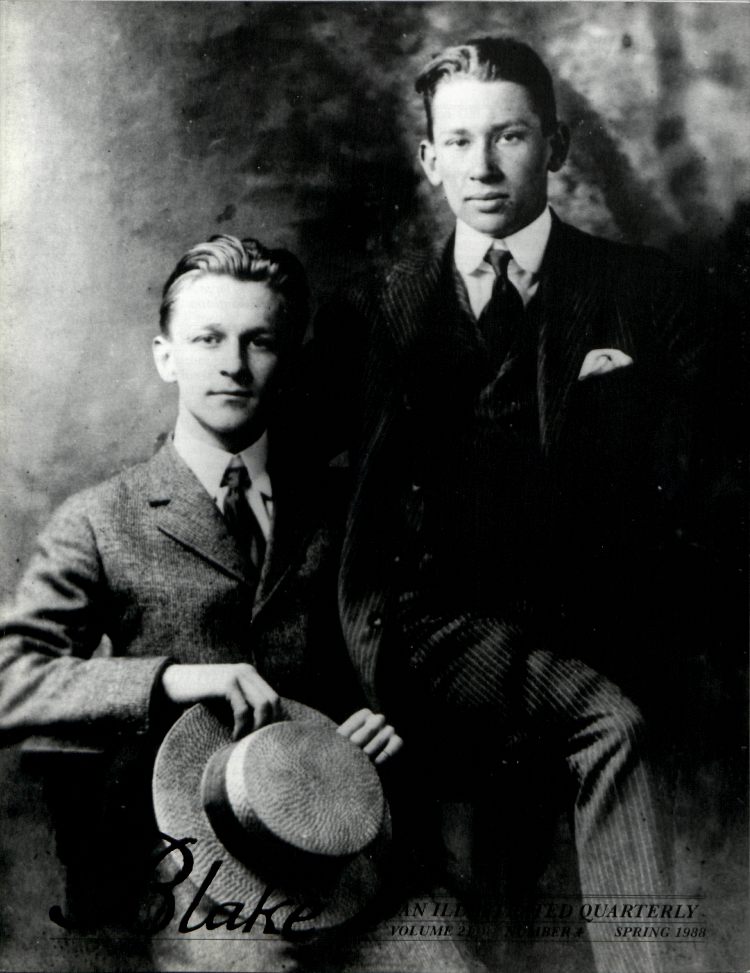 MARTIN BUTLIN is Keeper of the Historic British Collection at the Tate Gallery in London, and author of The Paintings and Drawings of William Blake (Yale, 1981).

JACKIE DI SALVO teaches English at Baruch College, City University of New York, and is author of War of Titans: Blake’s Critique of Milton and the Politics of Religion and various articles on Blake or Milton. She is presently completing a book on Milton for the Harvester Feminist Readings Series.

MORRIS EAVES, University of Rochester, will be co-director (with J. Paul Hunter of Chicago and Myra Jehlen of Rutgers) of the Institute for High School Teachers of English at the National Humanities Center in the summer of 1988.

ROBERT N. ESSICK, Professor of English at the University of California, Riverside, is author of a catalogue of the states of Blake’s Job engravings, recently published by the William Blake Trust, and of William Blake and the Language of Adam, forthcoming from Oxford University Press.

GEORGE GOYDER is a Blake collector and co-founder with Sir Geoffrey Keynes of the William Blake Trust. He was the UK representative of the International Paper Company from 1934-1973. His publications include: The Responsible Company (Blackwell, 1961), The Peoples’ Church (Hodder, 1966), and The Just Enterprise (Andre Deutsch, 1987).

NELSON HILTON, University of Georgia, is the review editor for Blake. He recently edited Essential Articles for the Study of William Blake, 1970-1984 (Archon Books, 1986).

INGE JONSSON, Professor of Comparative Literature and Vice-President of the University of Stockholm, has written a number of books on Emanuel Swedenborg.

DONALD H. REIMAN is editor of Shelley and his Circle and The Bodleian Shelley Manuscripts. His current books are Romantic Texts and Contexts (Missouri, 1987) and Intervals of Inspiration: The Skeptical Tradition and the Psychology of Romanticism (Penkevill, 1988).

DAVID SIMPSON is Professor of English and Comparative Literature at the University of Colorado, Boulder. His most recent book is Wordsworth’s Historical Imagination: The Poetry of Displacement (Methuen, 1987).

TADEUSZ SŁAWEK teaches English and modern critical theory at the University of Silesia, Poland. He has published articles on Nietzsche, Derrida, and Heidegger as well as three volumes of his own poems. His most recent book is The Outlined Shadow: Phenomenology, Grammatology, Blake (University of Silesia Press, 1985).

SHEILA A. SPECTOR, primarily interested in Judaic influences on Blake, has written “Blake as an Eighteenth-Century Hebraist,” and is currently compiling Christian Hebraism: A Sourcebook of English-Language Materials for Garland.

DAVID H. WEINGLASS is Professor of English at the University of Missouri at Kansas City, and the editor of The Collected English Letters of Henry Fuseli (1982); an enlarged edition will soon be published by the Swiss Institute for Art Research, Zurich. His comprehensive catalogue of Fuseli’s engraved illustrations is also nearing completion for the same publishers.

Blake / An Illustrated Quarterly is published under the sponsorship of the Department of English, University of Rochester.

Subscriptions are $18 for institutions, $15 for individuals. All subscriptions are by the volume (1 year, 4 issues) and begin with the summer issue. Subscription payments received after the summer issue will be applied to the 4 issues of the current volume. Foreign addresses (except Canada and Mexico) require a $3 per volume postal surcharge for surface mail, a $10 per volume surcharge for air mail delivery. U.S. currency or international money order necessary. Make checks payable to Blake / An Illustrated Quarterly. Address all subscription orders and related communications to Patricia Neill, Blake, Department of English, University of Rochester, Rochester, NY 14627, USA.