Like the heroine of her novel Mary, a Fiction (1788), Mary Wollstonecraft delighted in “the society of men of genius,” her particular favorites being “men past the meridian of life, and of a philosophic turn” (51).*↤ Research for this short paper was carried out in Switzerland, August to November 1985, as part of a larger project supported by a travel and research bursary from the Swiss Arts Council Pro Helvetia, to whom I express my grateful thanks. One member of this “rare genus,” still unknown to her, although their paths were soon to cross, was Henry Fuseli. According to John Knowles this did not take place until the autumn of 1790,1↤ 1 Life and Writings of Henry Fuseli (London: Colburn and Bentley, 1831) 1:161. although Mary’s biographers generally seem to assume that she must have known 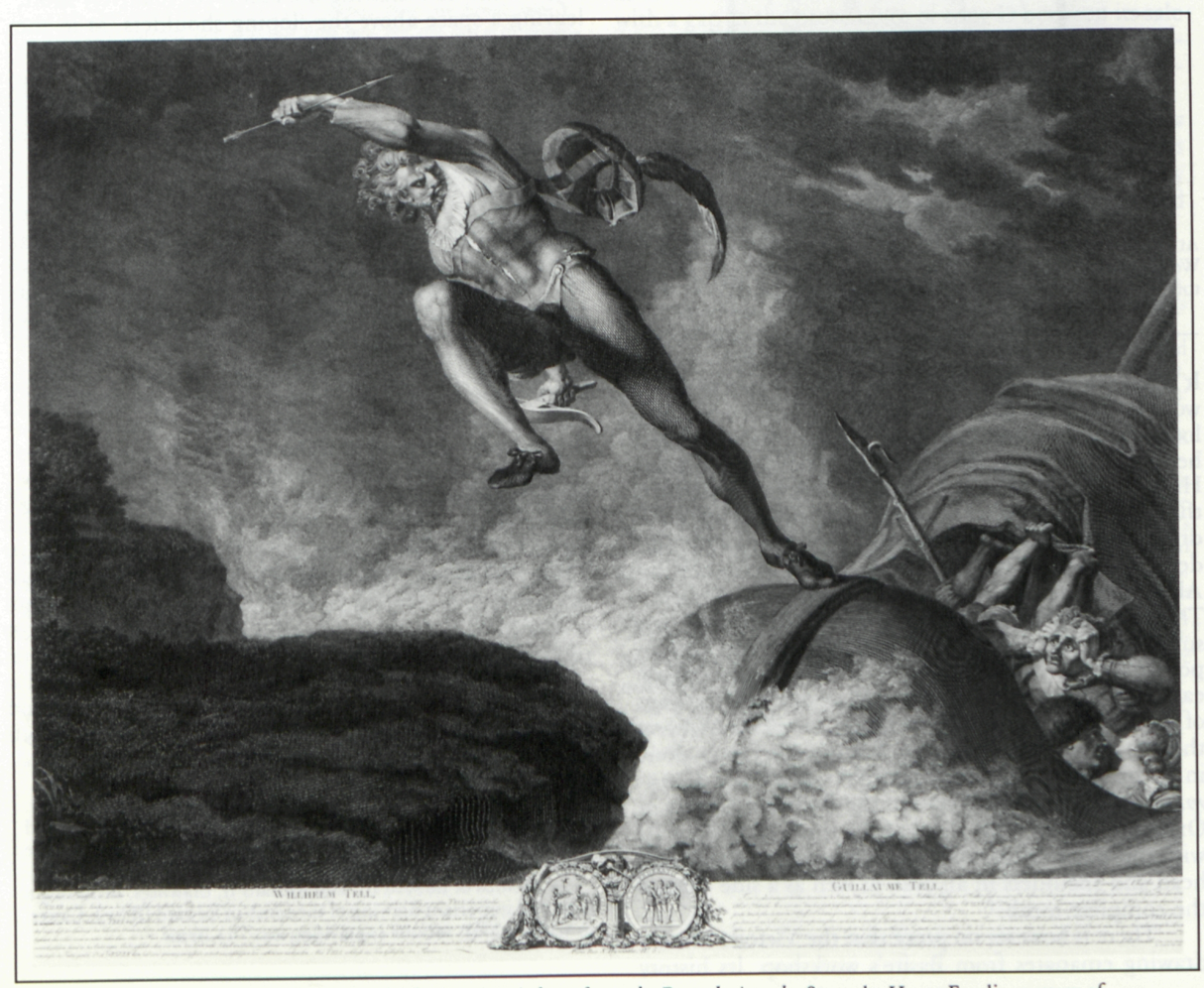 William Tell Escapes from the Tyrant Gessler by Leaping Ashore from the Boat during the Storm by Henry Fuseli, courtesy of Oeffentliche Kunstsammlung Basel Kupferstichkabinett.
Fuseli from the time she became a full-fledged member of Joseph Johnson’s circle.2↤ 2 “Whenever I am tired of solitude,” she writes to Everina in a letter to which Wardle has assigned the date [c. 15 November 1787], “I go to Mr. Johnson’s, and there I met [?meet] the kind of company I find most pleasure in” Ralph M. Wardle, ed. Collected Letters of Mary Wollstonecraft (Ithaca: Cornell UP, 1979) 166. Given the lack of documentation, a letter recently located in a Swiss collection may be considered as significant in helping to establish more firmly the date when their acquaintanceship began and under what circumstances.

Fuseli’s letter, written in German and dated 15 January 1788 from London, is probably missing the first page for it launches into its subject with an abruptness merely heightened by the lack of any salutation. The collateral address sheet reveals Fuseli’s correspondent to be his cousin, the painter and art dealer [Johann] Heinrich Füssli (1751-1829), residing in Paris. At the urging of an unspecified friend, Fuseli requests information on behalf of an unnamed young woman about the cost of a six-month stay with a suitable family in that city, which would allow her to improve her French—and her teaching begin page 145 | ↑ back to top prospects. The identity of the young woman is not far to seek. She is surely none other than Everina Wollstonecraft, the object of Mary’s constant concern and of her frequently expressed desire in her letters of this period to “mitigate” her sister’s fate (“could she catch the French accent I could easily procure her a reputable abode”).3↤ 3 To George Blood, 17 January 1788 (Wardle, 170). The friend would, of course, be Joseph Johnson, the liberal bookseller of St. Paul’s Churchyard, who had behaved to Mary with such “tenderness and humanity,”4↤ 4 To Everina, 7 November [1787] (Wardle, 165). and to whom Mary had unburdened herself about Everina’s and Eliza’s precarious situation. He was clearly not only privy to the “schemes” she was “envolved” in on their behalf, but actively sympathetic to their aims.

Indeed, Mary’s letter of 17 January 1788 may be seen to presuppose a knowledge of Fuseli’s enquiry written two days earlier. Not only does Mary now believe “I shall contrive for [Everina] to spend a few months in France,” she is clearly also waiting to be put “out of suspense” as to the outcome of this initiative. She apparently did not have long to wait: within a month Everina was in Paris, settled in lodgings with “Mademoiselle Henry, Rue de Tournon, Faubourg St. Germaine.”5↤ 5 To Everina Wollstonecraft, 22 March [1788] (Wardle, 174). Unfortunately Füssli’s reply has not survived, although it may, in fact, have been the letter “from a kinsman who was residing with Mr. Rougemont banker at Paris,” which Knowles found among Fuseli’s papers together with an answer, but was unable to tell whether it was “only a rough draught or a fair copy.”6↤ 6 John Knowles to Heinrich Füssli, 27 July 1826 (Zentralbibliothek, Zurich, Ms. Lind. 73) (included in the revised and enlarged edition of my Collected English Letters of Henry Fuseli in press with the Swiss Institute for Art Research, Zurich).

Fuseli’s idiosyncratic capitalization has been retained but where appropriate single “-n-” and “-m-” have been doubled in conformity with modern German usage, e.g., “benan[n]te.”

↤ 7 MS: Zentralbibliothek, Zurich, Ms. Lind. 73. Address: Mr. Henry Fuessli / Hotel D’Auvergne / Quay des Augustins / Paris. Postmark: ANGLETERRE. ↤ 8 The reference to Fuseli’s lost painting, William Tell Escapes from the Tyrant Gessler by Leaping Ashore from the Boat during the Storm (Schiff 719), which had apparently been sent to Paris the previous year for Carl Gottlieb (or Gottfried) Guttenberg (1743-1790) to engrave, allows us to narrow the dating of the picture from [1780-1790] to [1780-1787]; Guttenberg’s plate seems to have appeared in 1789.

[Translation]
A young woman, who purposes to become a teacher of French in a school here and who is already somewhat familiar with the language, wishes to live in Paris for six months En pension with a good family. Let me know whether 15 Guineas will cover her board and lodging for this period of time. She is not rich—. A friend of mine, hearing that I had acquaintances in Paris, asked me to enquire about this, and I beg you to check it out among those you know and I will consider it as a service rendered to me personally.
I don’t know whether or not Mr. Guttenberg likes the [picture of William] Tell; but I do know it isn’t very considerate of the two of you not to let me know whether you received it or not. Love me.
H. Fuseli.
London 15 Jany. 88.
Reply soon.

Fuseli’s letter is important since, by linking him for the first time with Mary Wollstonecraft, it provides a terminus a quo for the beginning of their acquaintance. Indeed, Fuseli’s efforts on behalf of Mary’s sister undoubtedly also helped shape their future relationship; he must surely have merited a place among those “few others” whose “unexpected kindness” she so “thankfully recollected” a few months later.9↤ 9 To Joseph Johnson [c. mid-1788] (Wardle, 178). At the least, the letter clarifies how Mary was enabled to make arrangements for Everina’s stay in France at such short notice, and approximately how much money was involved. 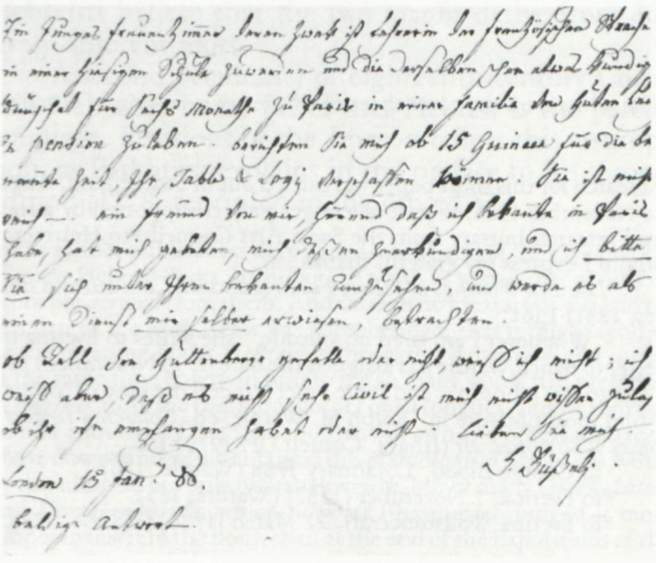 Surviving page of Henry Fuseli’s letter of 15 January 1788 (in German script) to his cousin, Heinrich Füssli, at Paris.   Fuseli wrote very little after this date in German; but when he did so, he regularly used Roman rather than German script. Courtesy of Zentralbibliothek Zurich.
begin page 146 | ↑ back to top 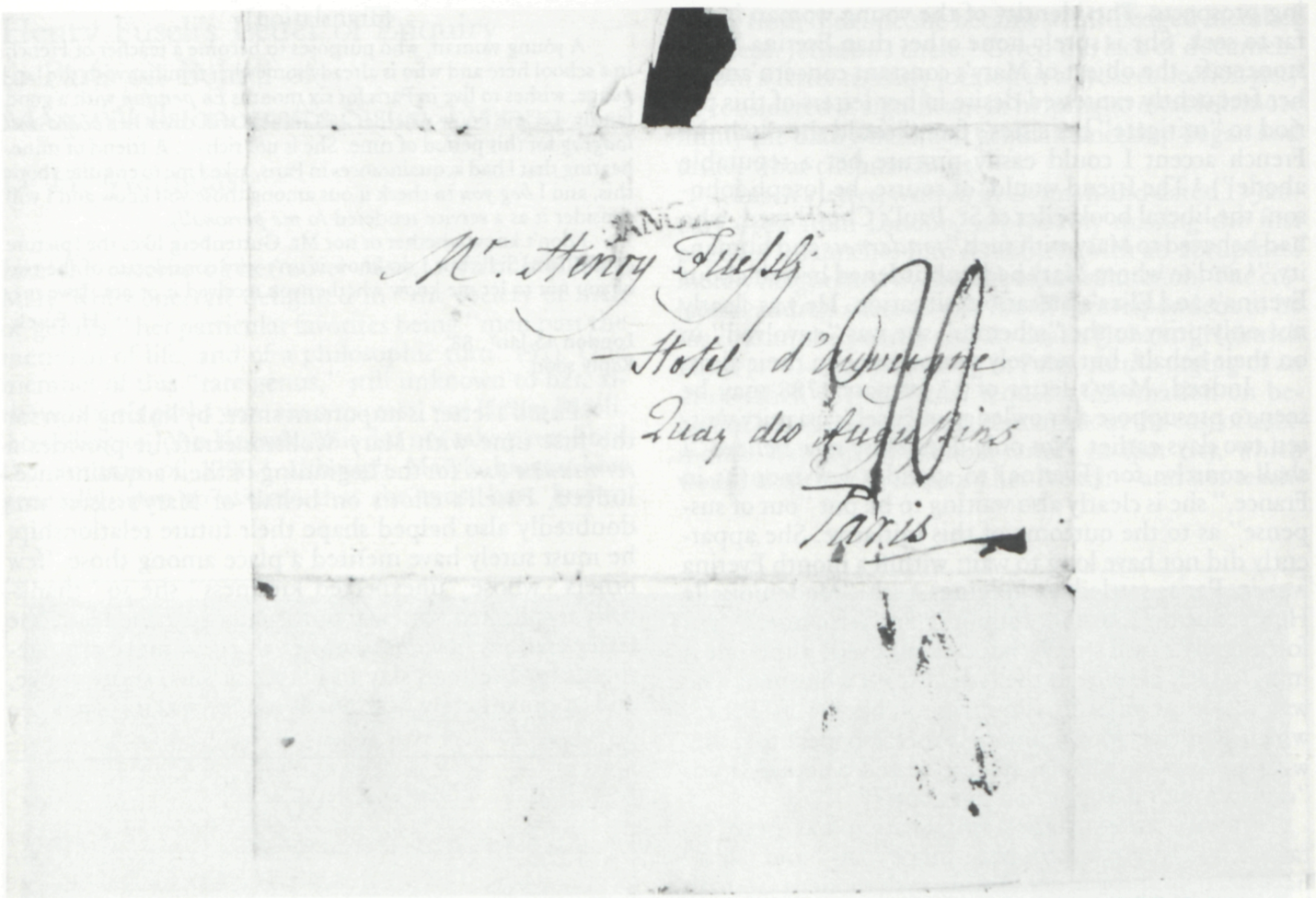 The address on the cover sheet of this letter is written in Fuseli’s characteristic non-German hand.   Courtesy of Zentralbibliothek Zurich.