Despite frequent citation of “To the Accuser who is The God of This World” as “one of Blake’s most perfect short poems” (Bloom 435, cf. Damrosch 356), no one seems to have remarked a probable source for the poem’s concluding reference to (or, that) “The lost Travellers Dream under the Hill.” Alicia Ostriker writes that “The lost traveller is man, and Satan is but his dream” (1040); W. H. Stevenson sees an “allusion to such common folktales as that of True Thomas, or Rip Van Winkle, in which a mortal is carried into a fairy hill” (845); Damon, perhaps choosing not to be too explicit, refers to “the mistaken ideals of those still wandering in the wilderness of life” (87).

But as the “prologue” of For the Sexes: The Gates of Paradise is preoccupied with images involving the Sinai revelation of Exodus (“Sinais heat,” “his Mercy Seat,” “Jehovahs Finger” writing the Law), it’s not surprising to find that event in the “epilogue” as well. Moses’ fellow travellers, Blake could read (reading white where we read black), are finally lost “under the hill.” For in William Tyndale’s translation (does anyone imagine Blake limiting himself to “the Authorized Version”?), “Moses brought the people out of the tētes to mete with God. and they stode vnder the hyll” (Ex 19:17). Later, according to both Tyndale and the AV, Moses builds “an altar under the hill” (Ex 24:4). And Tyndale’s Deuteronomist has Moses remind the people that “ye came ād stode also vnder the hyll [AV: ‘under the mountain’] ād the hyll burnt with fire” (4:11). “Under” in these translations of the common Hebrew preposition “tahat” (“under”) has the evident denotation of “position at the bottom or foot of something” (s.v. OED I.7, cf. c. 1402 and 1662), though some literalist rabbis suggested that YHWH uprooted the mountain and suspended it over the Israelites to encourage acceptance of the Torah (Kasher 9:90). They submitted and—Blake seems to say—remained asleep.

The illustration offers another comment alongside the striking representation of psycho-sexual fantasy (Hilton 169). For the sleeping figure (Moses and his rod might suit the context) is graphically under a design that suggests an image of Lucifer, “The Son of Morn”—or, in terms of the text, “the Hill.” Here we encounter a marvellous particular instance of how powerful texts 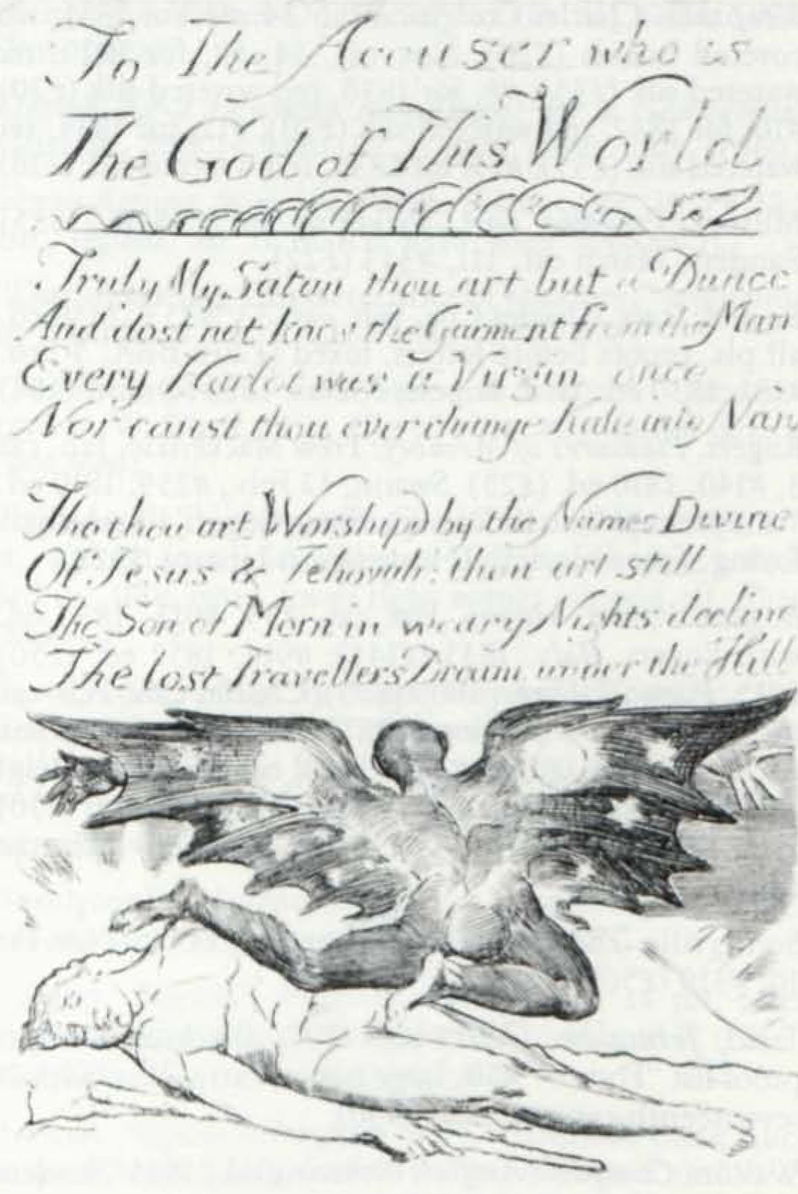 Epilogue, For the Sexes: The Gates of Paradise.   Courtesy of the Pierpont Morgan Library, New York. PML 9948.35 copy J pl. 21.
are overdetermined, since Blake knows the Hebrew Hêlēl for Lucifer or the morning star (as in Isaiah 14:12) and writes in Milton that “Hillel . . . is Lucifer” (32.8). We might further hypothesize the term *hill’el on the analogy of the Hebrew har’el or “mountain of god,” which, fascinatingly enough, is the AV gloss on Ezekiel’s vision of “the altar” (43:15: “Harel, that is, The mountain of God”). In any event, the trajectory continuing Hillel’s lowest visible right wing rib along the outline of the hill suggests we are to see both bodies as alternate states of the same dream-work. The Sinai context also suggests that, far from a happy “hill beyond which dawn is bursting on all sides” seen by Erdman (279), we end peering through smoke of hill-fire and wondering, with those earlier lost dreaming travellers, what and where is real. begin page 17 | ↑ back to top