The Scattered Portions is a scholarly guide to the symbolic meanings of plant and animal imagery in Blake’s poetry and designs, including many species of beast, bird, insect, reptile, fish, tree, and plant. Sources for the meanings of these images include Boehme, Swedenborg, the Bible, iconographical works (e.g., Caesare Ripa), emblem books (e.g., Francis Quarles, John Huddleston Wynne, and John Bunyan), and Blake’s poetic predecessors, including Chaucer, Spenser, Shakespeare, and Milton. A ground thesis of The Scattered Portions is that Blake’s poems and designs often portray a fallen humanity “perceiving projections of his own psyche in various biological forms” (8), while many of these objectified aspects of humanity are “capable of being reclaimed” in a Blakean vision of regeneration. This book learnedly decodes specific animal and plant images to disclose what human property each represents. The Scattered Portions thus shares concerns with previous studies of emblematic and iconographical language by Beryl Rowland, Mary Lynn Johnson, and Judith Wardle (all of whom Baine cites), as well as Janet A. Warner’s Blake and the Language of Art (1984), also a valuable book on such matters. Baine’s biological focus provides a distinctive and informative frame of reference.

As always, the limits of a critical work involve matters of theory and method, spoken or unspoken, and I shall have more to say about such matters shortly. Baine’s notion of “symbol” apparently operates more like S. Foster Damon’s confident assumptions (in William Blake: His Philosophy and Symbols [1924] and A Blake Dictionary [1965]) than, for example, Hazard Adams’s argument (in Philosophy of the Literary Symbolic [1983]), let alone the semiotic and post-semiotic complexity of Nelson Hilton’s Literal Imagination (1983) or the essays gathered by Thomas Vogler and Hilton in Unnam’d Forms: Blake and Textuality (1985) or by Donald Ault, Mark Bracher, and Dan Miller in Blake and the Argument of Method (1988). The assumption that a symbol has meaning—that an image in word or design refers with some reliability to a conceptual object—is qualified begin page 40 | ↑ back to top 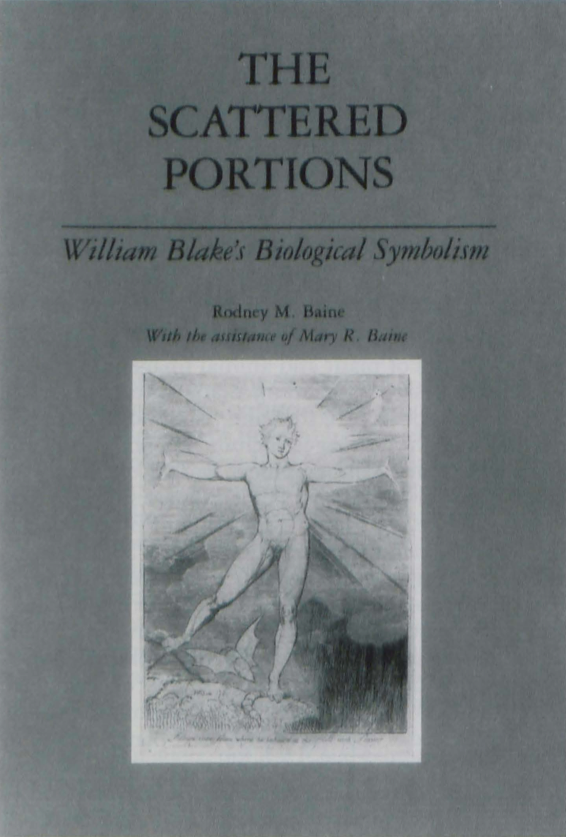 responsibly when Baine notes exceptions to customary meanings, but that concept of “symbol” is not itself investigated or questioned.

That said, and that limit recognized, I want to emphasize at the outset that The Scattered Portions is a valuable work in numerous ways: richly annotated and responsibly scholarly, this compilation of examples and sources is a useful reference work; the book’s 77 illustrations substantially enhance its value, and the index is among the best I have seen in a long while, making frequent and long-term use of the book easier and more rewarding. The prose is straightforward and clear, with some elegant writing especially in the chapters on herbivorous animals and carnivorous beasts.

Beyond the book’s usefulness as a reference work, however, lie some important issues of argument, and to these I want to turn now in two ways: first, by illustrating Baine’s arguments with some examples; and finally by suggesting some of the arguments that the book can open provocatively.

Carnivorous beasts are said to symbolize “aspects of fallen, malevolent man.” This moral meaning (tiger = cruelty, Selfhood) is coupled with a political frame of reference (war in Europe, “tyrannizing emotions” of the Reign of Terror in Ahania) (17). Lion, wolf, behemoth, and tiger appear in numerous examples from the poems and designs, typically after statements or examples from the Bible, Swedenborg, Boehme, Spenser, and Milton, often engravings (from Goltzius, e.g.), and often Shakespeare, or Chaucer, or Goldsmith. Herbivorous animals—lamb, sheep, goat, horse—are said sometimes to symbolize innocence or creativity, sometimes aspects of fallen humanity, and again an abundance of examples is produced.

The birds of prey include the vulture (“with one realistic exception [VDA 5. 36], invariably malignant”), raven (battlefield scavenger or priest), and crow (“malice and spiritual darkness”) (77, 79). The “eagle of vision” in Blake’s early works (drawn, for example, from iconographical associations with St. John) is distinguished from the “predatory eagle” of oppression and war, in Blake’s later works, associated with the imperial eagle of Roman symbolism. (This reading of eagles, I add briefly, raises some problems, to which I shall return subsequently.)

“Man can be just as devouring as the caterpillar or intellectually dead as the chrysalis or as innocent and beautiful as the butterfly”; Baine finds that “in the insect metamorphosis Blake found the most dramatic analogy of his distinction between states and individuals” (84). This principle leads to an optimistic interpretation of the 1780 line engraving, Albion Rose (other readings of that design—notably Joseph Wittreich’s, in Angel of Apocalypse—find darker ambiguities). The mixed implications of the insect imagery on the title-page of Jerusalem are read as an exhibit of an “interim state” between a lament and a promise (93). The contrary tones of this plate’s imagery have been read as conflations, as simultaneous and contradictory signs, in my Prophecy and the Philosophy of Mind (1985). The insect chapter is particularly persuasive on spiders “and the manner in which moral, religious, and legal institutions entrap their victims” (99).

The chapter on reptiles includes a substantial discussion of the complex design of Jerusalem 41, which includes three serpents; this discussion alone amounts to a valuable contribution to studies of that poem. Other serpents abound among the exempla in this chapter, as well as dragons. (About the serpents, especially Orc’s serpent imagery in America, I want to raise some issues below.)

Whereas those serpents “are capable of being redeemed and reincorporated within the body of Man, . . . all the creatures of the sea seem to be without the prospect of such redemption” (121): Nelson and his Leviathan and the famous polypus are among persuasive examples. Poor Orc in America is here labeled a “killer whale” (130): “in both verse and designs Orc is a destructive, not a constructive force” (131). While I do not share that moral attitude toward Orc in America, George III probably would; and Orc in later poems, I would argue, is a different story.

The chapter on trees shows convincingly that arborization is a symbol of materialized life. Further, “in the French Revolution the forest suggests also the domination of empire” (135), a level of reference that helps obviously with other poems, including “The Tyger,” as well. “Innocence is characterized by shady, deciduous trees; Experience, by dead or dry ones” (136). While I am not as convinced that shadow or shade carries genuinely blessed or innocent connotations in Blake’s designs or poems, Baine’s descriptions do (in connection with the Songs) mark important pictorial distinctions. Looser usages of “Innocence” and “Experience,” as states to be discerned in any and all Blake poems, constitute another kind of problem. In the tree chapter Baine marks many species distinctions perspicuously. Ambiguities among trees (e.g., tree of Death or Life, fruit-bearing and bare trees) are usefully observed in several Blakean examples. Baine claims that the oak loses its druidic and deadly associations when it appears in Moses at the Burning Bush, but this claim deserves some argument: how many of Blake’s treatments of Moses present that patriarch as a “visionary shepherd-prophet”? Do the Moses designs (Burial of Moses, or the Urizen title-page, or Job’s Evil Dreams) not suggest something “patriarchal”? Is the Moses painting to which Baine refers really an opposite to “patriarchal” imagery found elsewhere, as Baine says? Aren’t “patriarchal” values, rather, present within this painting too?

“Man arborized is only a special form of man vegetated” (150): the mandrake, the brier, and the thron are among examples presented persuasively in the plants chapter. Vines falling and rising have different meanings, and grapes are ambivalently associated with love, sex, life (America, Songs of Innocence) or death, war, and the dominion of nature (French Revolution, Europe). The well-known Blakean flowers (sunflower, rose, lily) are interpreted sensitively in the context of an “ambivalent symbolic heritage.”

That ambivalence, however, opens some interpretive issues that warrant clarification and argument. Like the ambiguity of visual and verbal signs in Blake’s works, oft-noted in The Scattered Portions, this ambivalence might give rise to a sort of criticism very different from Baine’s decoding of a relatively stable symbol-system. It might return us to the visual and verbal context in which the symbol appears, as the only determining frame (determine: limit) of reference. A context-bound specificity of the image is one response to its variability (indeterminacy) of meanings; another response (Baine’s) is the construction of a relatively stable code. The book’s conclusion—that “in his verse and designs Blake tried to guard against ambiguity”—works against the methodological recognition of variability. And such a code rests confidently, perhaps over-confidently, on the assumption of a signified thing, a conceptual object out there, to which the image refers. “The Tyger is neither Christ militant nor creative energy, but an ugly and malevolent manifestation of the Selfhood” (170): here, as codes of morals and meaning typically do, the translation separates opposites and disentangles contradiction. “The ‘serpentine’ vine, loosely entwining a tree, no longer appears a threat” (171): but threat and redemption, creation and malevolence, may not need to be disentwined by the interpreter, if the design entwines them in good earnest. The designs’ disturbing complexity may involve a deep-level contrariness that is cognate with the pictorial paradox. Our thematized supplements (innocence, experience, love, malevolence) may be as ambiguous and perspectival as the literal and visual design elements themselves.

Examples of particular interpretive judgments resting on this presumption of code are numerous: is Orc’s “inevitable degeneration” (119) necessarily present in America, because Europe, The Four Zoas, and Northrop Frye have taught us a theory of the Orc cycle? A method committed to a relatively stable code tends to separate differences rather than honor contradictions. The eagle in Milton 42 is a “predatory eagle” rather than one of the “eagles of inspiration” found in the Marriage, according to Baine (see chapter 5 passim). Never the twain shall meet. But the design might instead be seen to conflate these contexts—aggression, war, and prophecy—especially as the scriptural prophecy emblematized by the eagle of John was appropriated in both Milton’s lifetime and Blake’s as a war-cry (mark well the biblical commentators’ words: they speak of corporeal war).

Considerably to the credit of The Scattered Portions, Baine does conscientiously acknowledge different meanings for animal symbols: a horse can “suggest the vehicular energies of three Zoas” (47), and any of them might represent fallen or unfallen aspects of humanity. In this way, Baine sets the signifier almost free. But the “fallen” horse or Zoa is located over here, and the “unfallen” one over there; the interpretation staves off the possibility that any given image might compress such conflicting connotations that its complexity eludes a fixed meaning.

The appeal of a stable reference is the appeal of closure, a settled question—good on the one hand and evil on the other, and so good night. But Blake’s shifty and shifting forms might frustrate this quest for semantic stasis. Extreme forms of the stable code include the Mosaic tablets of the law (as in the Urizen and Milton designs). Just as the figure of Milton bursts past this stone closure (in the full-page design which is plate 18 in the Rosenwald copy), opening an infinity on the far side, so Blake’s iconography may open, multiply, aggravate, and shift its implications, exploding moral norms into dynamic variability. The lion and ox may be said to symbolize different things: but the code within which those meanings are found is one law for the lion and the ox.

That The Scattered Portions provokes questions like these should be seen as a strength rather than a weakness. The book’s compendiousness, its scholarship, its excellent apparatus, and its generous illustrations contribute to the book’s utility, and I know that it will prompt me to argue again more than once. I’ve already started to analyze more critically Blake’s supposed left-right symbolism, for example. Baine is uniform in applying it, but it seems to me that some reversals of the scriptural seating-chart for sheep and goats carry some ideological importance. For the provocation of argument, too, The Scattered Portions is a book of value.