It has become increasingly apparent that sources for Blake’s designs may be located in various areas of the popular print market. David Bindman has shown that certain images used by Blake may be related to eighteenth-century children’s emblem books, to seventeenth-century anti-papal engravings, and to eighteenth-century hieroglyphic prints.1↤ 1 David Bindman, “William Blake and Popular Religious Imagery,” Burlington Magazine 128 (1986): 712-18. David Erdman has demonstrated that the political satires of James Gillray exerted an influence on some of Blake’s work.2↤ 2 D. V. Erdman, “William Blake’s Debt to James Gillray,” Art Quarterly 12 (1949): 165-70. See also Erdman, Prophet Against Empire, 2nd rev. ed. (Princeton: Princeton UP, 1969) 203-05, 218-19. And see N. Bogan, “Blake’s Debt to Gillray,” American Notes and Queries 6 (1967): 35-38. Gillray was, however, by far the best trained and most talented of the political caricaturists working in London from the late eighteenth century until the onset of his insanity in 1810. His work stands above the technically inferior prints of lesser contemporaries such as Isaac Cruikshank, George Moutard Woodward, and Richard Newton. Up to this point the cruder types of political etching have not been put forward as an influence on the work of Blake. The striking parallels between a print of Newton’s entitled “The Birth of Billy Bugaboo” (illus. 1), which came out on 13 August 1797, and Blake’s illustration “The Dog” (illus. 2), which was the first plate in the 1805 edition of Hayley’s Ballads, suggest that in this instance Blake was influenced by a very coarse political print of the day.3↤ 3 M. D. George, Catalogue of Political and Personal Satires: Preserved in the Department of Prints and Drawings in the British Museum (London: British Museum 1949-52) vol. 7, print. No. 9029. Hereafter cited as George with catalogue number. 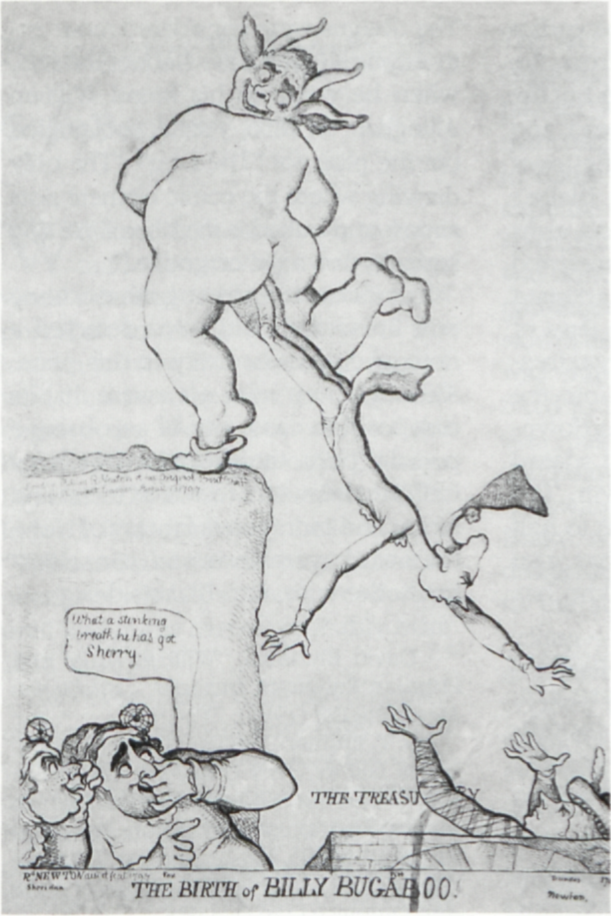 2. William Blake, “The Dog,” from Hayley’s Ballads, 1805.   Courtesy of the Henry E. Huntington Library and Art Gallery.[e]
[View this object in the William Blake Archive] 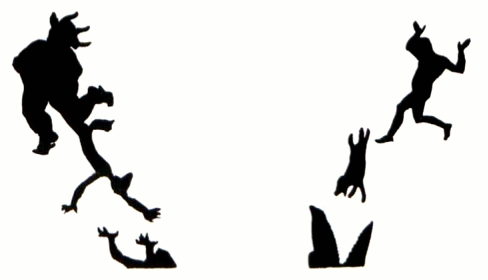 Compositional elements of Newton’s “The Birth of Billy Bugaboo” (left) and Blake’s “The Dog” (right).[e]

The parallel is particularly interesting because Nicholas Warner has already suggested two other “visual analogues” for this particular Blake print.4↤ 4 Nicholas Warner, “Visual Analogues to Blake’s ‘The Dog.’” Blake 18 (1984-85): 140-43. The second of Warner’s examples, Gillray’s “The Republican Rattlesnake Fascinating the Bedford Squirrel” came out on 16 November 1795.5↤ 5 George 8864. The Gillray has enough similarities with the Newton print to suggest that Newton may have adapted major compositional elements from the earlier print. The Newton print does, however, anticipate both the composition begin page 248 | ↑ back to top and imagery of the Blake illustration much more precisely than the Gillray.

“The Birth of Billy Bugaboo” is an example of the scatological extremes that were permitted in the print satire of the late eighteenth century. Its formal control and clarity of line is typical of the print satires which Newton executed just before his death at the surprisingly early age of twenty-one. A devil standing on the brink of a sheer cliff, naked except for a pair of slippers, gleefully excretes an absurdly elongated figure of Pitt into mid air. He flies down towards the open and extended arms of Henry Dundas, which reach up from the treasury roof. The heads and upper bodies of Sheridan and Fox are visible in the bottom left hand corner. They hold their noses and gaze at the obscene birth as Fox exclaims, “What a stinking breath he has got Sherry.” The print attacks Pitt’s policies of taxation. It is a visual actualization of the phrase, “Hell born Minister,” the inscription on an earlier placard that enjoyed great popularity.6↤ 6 See George’s discussion of the background to print 9029. Both these satires were directed at the title of “Heaven born Minister” which had been bestowed on Pitt by his supporters.

Every major element in this print, with the exception of the figures of Fox and Sheridan, found its way into Blake’s design. Blake appears to have reversed the composition, the diagonal thrust moving from top left to bottom right. It should be remembered, however, that the printing process reversed the imagery, so that Blake’s actual engraving on the plate would have followed the arrangement of the earlier print. The devil runs away from the edge of the cliff, not towards it, but the position of his legs, his tilted head, and his nudity all reappear in the figure of Edward, the young man, in Blake’s print. The gesture of Edward’s arms extended in horror has been transferred from the figure of Pitt. Blake adapted Dundas’s open arms into the jaws of the crocodile, and the horizontal treasury roof has been changed into the ocean. The dog flying headlong downwards, with open mouth and spread forelegs, takes the place of Pitt. The sheer cliff face, which extends to half way up the earlier design, has also been maintained by Blake, who has given it a dramatic overhang.

Critical responses to the illustration are revealing in the light of this source. Blake’s plate was singled out for ridicule by Robert Southey in his generally dismissive review of the 1805 edition of Hayley’s Ballads: ↤ 7 Annual Review 4 (1806): 575.

Mediocrity as all the world knows, is forbidden to poets and to punsters; but the punster has a privilege peculiar to himself,—the exceeding badness of his puns is imputed a merit. This privilege may be fairly extended to Mr. Haley: his present volume is so incomparably absurd that no merit within his reach could have amused us half so much . . . The poet has had the singular good fortune to meet with a painter capable of doing full justice to his conceptions; and in fact when we look at the delectable frontispiece to this volume which represents Edward starting back, fido volant, and the crocodile rampant, with a mouth open like a boot-jack to receive him, we know not whether most to admire the genius of Mr. William Blake or of Mr. William Hayley.7

The designs were considered more enthusiastically by Dante Gabriel Rossetti, when he wrote to his friend William Allingham in 1856, yet he also singled out the plate for “The Dog”: “The only drawing where the comic element riots almost unrebuked is the one of the dog jumping down the crocodile.”8↤ 8 Dante Gabriel Rossetti, 8 Jan. 1856, Letter 227 of Letters of D. G. Rossetti, ed. O. Doughty and J. R. Wahl, 4 vols. (Oxford, 1969) 1: 279.

It is fascinating that both Southey and Rossetti should have detected a note of comic absurdity in this plate. Although they were not aware that its composition came out of an obscene popular print, their reactions perhaps indicate the extent to which the satiric fervor and outrageous fantasy of Newton’s work were absorbed, consciously or otherwise, into Blake’s design.