Blake’s Headgear: The Seventh Head of the Beast in Night Thoughts 345

For the title page of Night VIII of Edward Young’s Night Thoughts, Blake drew a striking water color showing the Whore of Babylon and the seven-headed dragon of Revelation (illus. 1). In my 1969 essay on the Night Thoughts series, I identified the heads as follows, going from right to left:

The one on the lower right is a judge, scaly, fanged and red-eyed. Somewhat resembling Blake’s later painting of the Ghost of a Flea, this representative of Law has a single horn and wears a judicial wig. Next comes the armored head of a warrior, then a crowned head with ram’s horns. The fourth head has goat’s horns and the papal tiara, the fifth the crown of a king. The next two wear, respectively, a bishop’s miter and a priest’s black biretta. The picture as a whole epitomizes the institutions of the fallen world revealed in their true monstrous nature as “Religion hid in War, a Dragon red and hidden Harlot” (J 89: 53, K 735). (155)

A similar view of the heads was advanced in The Apocalyptic Sublime (78-80), and recently John E. Grant disagreed with my characterization of the fifth head as wearing a bishop’s miter. “The distinctive feature of a bishop’s miter,” Grant correctly observes, “is that it has a slice removed, resulting in pointed horns fore and aft” (113n6). This is not the case with the fifth head, and Grant suggests that the headgear here may be Turkish, pointing to “a similar canonical hat (though less sharply pointed and adorned by a scarf 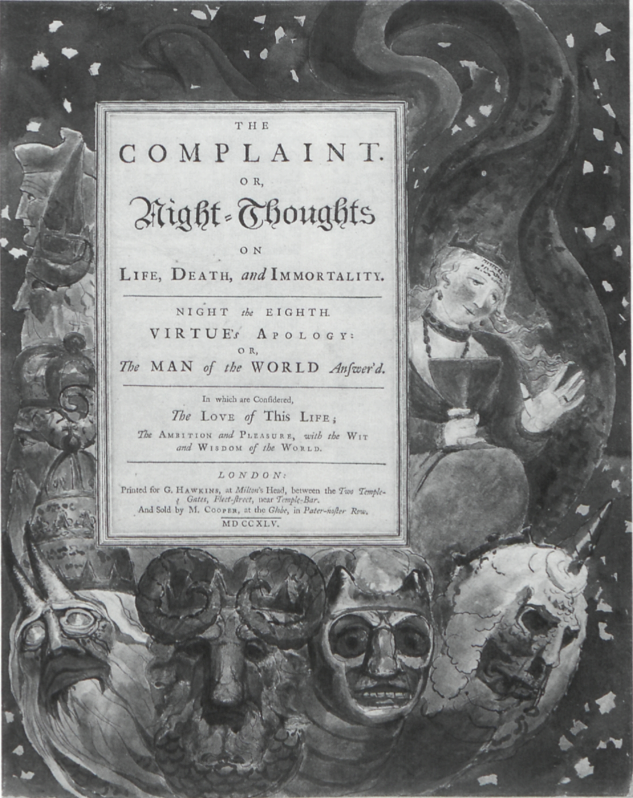 Figure 1. William Blake: Title page to Night VIII of Edward Young’s Night Thoughts (Butlin 345).   Pen and watercolor over pencil. By permission of the Trustees of the British Museum.
in the back) . . . worn by the standard-bearer and his follower who appear in an illustration attributed to Hogarth entitled ‘A Procession Through the Hippodrome, Constantinople,’ in Aubrey de la Motraye, Travels: Europe, Asia, and Part of Africa (London 1723/ 24).” Grant goes on to make the interesting suggestion that “The apparently Muslim hat reminds the viewer that Blake would not depend exclusively on Western symbolism to convey a sense of the powers that be.”

This suggestion is intriguing because, if its basis in fact could be demonstrated, Blake would be brought into closer relationship with millenarians who saw Turkey as connected with John’s apocalyptic visions. It was common in the 1790s and early 1800s to identify the Ottoman Empire with one of the horns or heads of one or another of the Beasts. The waning of the Ottoman Empire was for millenarians like Joseph Priestley and Joseph Bicheno a signal of the imminent realization of John’s begin page 143 | ↑ back to top prophecies. Blake’s writings, in which there are only two uses of “Turk” and two of “Turkey,” do not convey similar notions. In “The Divine Image” there is a universalistic statement that “all must love the human form, / In heathen, turk or jew” (E 13); and in a Notebook poem Fuseli “was both Turk & Jew” (E 507) because of his unorthodoxy in the eyes of others. The two references to Turkey in Jerusalem (72: 38 and 79: 48) occur among lists of nations that once dwelled in Jerusalem or may again dwell there, and Turkey is not differentiated from the others. Any evidence for a reference to Turkey in Blake’s great apocalyptic Night Thoughts design must therefore rest on the putative source for the headgear of the fifth head from the right.

Aubrey de la Motraye’s book, the correct title of which is Travels Through Europe, Asia, and into Part of Africa, was published in two volumes in London in 1723. It is profusely illustrated and a number of plates are signed by Hogarth. This includes plate 15 (illus. 2), which is designated as no. 23 in Paulson’s catalogue (1: 101). (No doubt is cast upon its authenticity there, and as the plate is signed it is difficult to know why it should be referred to as an attribution). In “A Table of the Prints in the First Volume,” the subject is described as follows:

Print XV: The Atmeydan itself, where the Turks still exercise their Horses after their manner, tho’ differently from the ancient Greeks. On the same Print is a Turkish Bride, whom they are conducting thus in Pomp to her Bridegroom,[e] who has not yet seen her, tho’ the Contract is made between the Parents; she is on Horseback under the Canopy (I). (429)

There is nothing of an apocalyptic nature here, nor is there in the corresponding part of the text proper:

The Bride, if she is of Condition, is set astride upon a Horse, with her face veil’d under a sort of Canopy like that in the Print, N XV, supported by four Men, and some Janizaries, with their Ceremonial Caps, march at the Head of the Procession, with the little Pyramidal Trophy adorn’d with 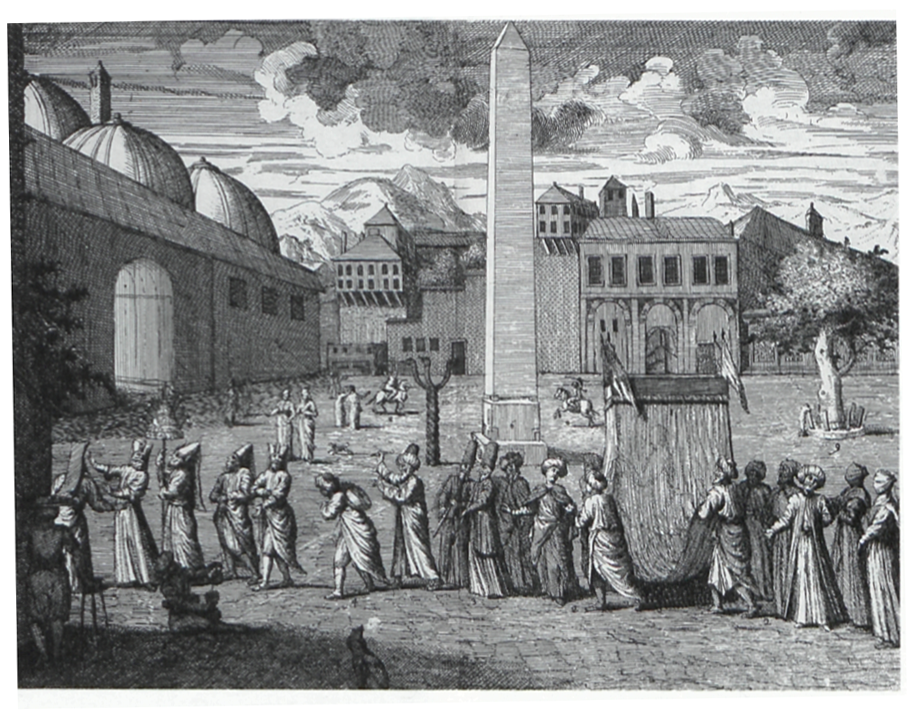 Figure 2. William Hogarth: Illustration for A. de la Motraye’s Travels Through Europe, Asia, and into Part of Africa, volume 1, plate 15.   Engraving. Courtesy of the Bancroft Library, University of California.
Handkerchiefs, embroider’d with Gold, Tinsel, and Jewels. (249)

Of course Blake could have taken a ceremonial scene such as this and adapted it to his purposes. Although nothing in the book’s description of the scene depicted suggests that the janissaries belong among the apocalyptic icons of Night Thoughts, something about the headgear could have struck Blake as appropriate. The most striking feature of the janissaries’ “ceremonial caps” is the the train that descends from the apex of the cone down the back of the wearer to a point corresponding to his waist. There is not a trace of such a train in Blake’s picture. What is there to suggest that the fifth head wears any kind of Muslim headgear? Without a distinctive train, this hat could have any number of antecedents.

Ronald Paulson suggests that Hogarth’s engravings for La Motraye were influenced stylistically by Bernard Picart’s Ceremonies et coutumes religieuse (Amsterdam 1793), an English version of which was published in London in 1731-39 as The Religious Ceremonies and Customs of the Several Nations of the Known Worlds. This elegant and well-known book no doubt influenced artists other than Hogarth. If we consider Picart’s depiction of a bishop in volume 2, we see that the cleft in the miter was more or less visible depending on the position of the bishop’s head (illus. 3). In “Autre Maniere [sic] de Confirmer” that position is almost the same as that of the head in Blake’s drawing, reversed. If we imagine a vertical line in Picart’s engraving in the position of the printed paste-in on Blake’s page, we can see that the miter could be made to appear conical as a result. In Blake’s drawing, however, there is a very slight upturn as the headgear meets the inset margin. Was this a slip on Blake’s part or are we to imagine that line continuing upwards behind the printed title? If the former be the case, this figure’s headgear may be a bishop’s miter; if the latter, the result would be equally inappropriate for Turk or Christian.

Picart, Bernard. The Religious Ceremonies and Customs of the Several Nations of the Known World. 7 vols. London, 1731-39. 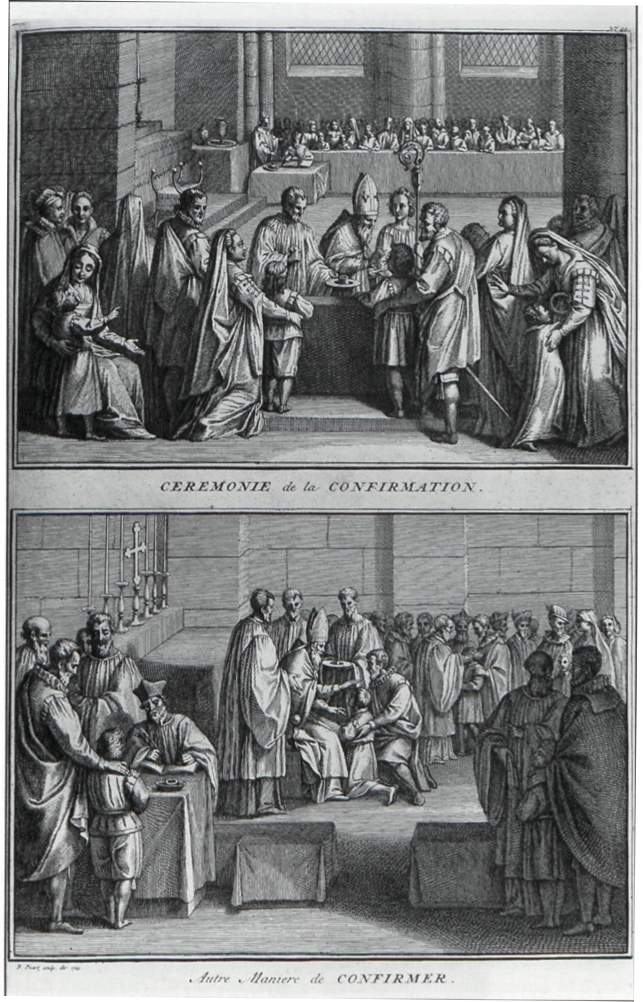