A Reprinting of Blake’s Portrait of Thomas Alphonso Hayley

We have long known that a few of Blake’s copperplates for his commercial book illustrations were reprinted many years after his death. The Hesiod and Iliad outlines based on John Flaxman’s compositions were republished by Bell and Daldy in 1870. Blake’s large engraving of Hogarth’s “Beggar’s Opera” painting was reprinted by Bernard Quaritch Ltd. c. 1880 and by the university presses of Harvard and Yale in 1965.1↤ 1 For this and other basic information about Blake’s copy engravings noted in this essay, see G. E. Bentley, Jr., Blake Books (Oxford: Clarendon Press, 1977), and Robert N. Essick, William Blake’s Commercial Book Illustrations (Oxford: Clarendon Press, 1991). To this modest list we can now add another of Blake’s intaglio copy engravings.

My interest in images of women in nineteenth- and twentieth-century literature led the San Francisco book dealer John Windle to offer me a copy of a self-consciously curious volume, Andrew White Tuer’s The Follies & Fashions of Our Grandfathers, 1886-87. A bibliographic transcription of the title page might have challenged the skills even of the late Fredson Bowers, and thus I include here a photograph (illus. 1). Windle explained that the book contains reproductions of fashion plates from the early nineteenth century (many of women’s dresses, in spite of “Grandfathers” and no grandmothers on the title page), various reprints of articles from British journals of 1807 (e.g., Lady’s Magazine, Lady’s Monthly Museum, and La Belle Assemblée), and one illustration signed “Blake. sc.” Doubly intrigued, I purchased the book. Much to my surprise, the “Blake” plate turned out to be an impression, or a most convincing facsimile, in brick red ink, of Blake’s portrait of Thomas Alphonso Hayley (illus. 2), based on a medallion designed by Flaxman and first published in William Hayley’s An Essay on Sculpture: In a Series of Epistles to John Flaxman (London: T. Cadell and W. Davies, 1800). In its original context, the plate illustrates Hayley’s “Epistle VI” on his grief over the death of his natural son, a student of Flaxman’s in the art of sculpture. In Tuer, the image faces p. [237], one of the prefatory descriptions of the “Embellishments” bound at the beginning of each chapter containing reprints of essays all from the same month in 1807.2↤ 2 The National Union Catalogue claims that Tuer’s book was “published in monthly numbers,” but that is simply a misunderstanding of Tuer’s attempts to make it look as though each chapter is a journal issue with its own combination title page and table of contents. These prefaces are not themselves reprints, but appear to have been written by Tuer as brief descriptions of his miscellaneous illustrations for each chapter. The paragraph on Blake’s plate, p. [237]-38, headed “Mr. Hayley the Sculptor” in the “September” chapter, briefly outlines Thomas Hayley’s accomplishments, his death at the age of 20, and the fact that, “as a gratuitous offering to the memory of so gifted and well beloved a scholar, Mr. Flaxman executed a beautiful marble monument, from which is copied our medallion portrait.” Blake is not mentioned either in this description or in the “List of Embellishments” on the unnumbered fourth leaf at the start of the volume, where the plate is listed as “Portrait of Mr. Hayley, the Sculptor. Copper-plate.”

As illus. 1 reveals, Tuer states on his title page that “many” of his illustrations are “from original copper-plates.” The same claim appears on p. 2 of “Field & Tuer’s List,” an advertisement for their publications bound at the end of the volume. A slight ambiguity in the word “original” would permit Tuer to have re-engraved old plates on new coppers (“an original” copperplate as distinct from “the original” plate) without being liable to the charge of false advertising. This would seem to be the case with the plates facing pp. 238 and [269], entitled respectively “The Musical Group” and “The Lecture.” These are based on William Hogarth’s engravings but they are clearly not printed from his original copperplates. Further, the many fashion plates would appear to be hand-colored lithographs and most bear imprints of The Leadenhall Press dated 1886. However, in his general “Introduction” to the volume, Tuer 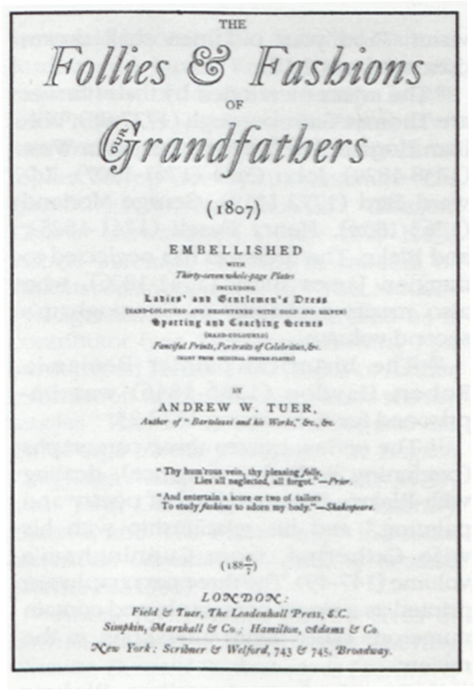 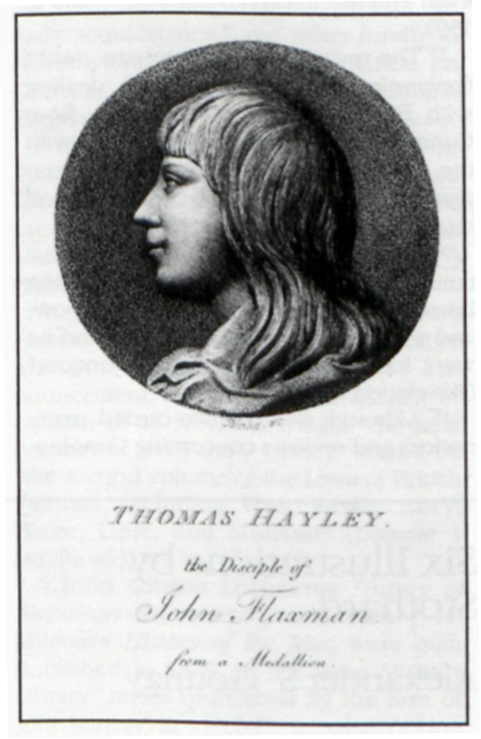 2. “Thomas Hayley,” engraved by Blake after a medallion designed by Flaxman.   Second state, printed in brick red in Tuer, The Follies & Fashions of Our Grandfathers, 1886-87, quarto issue. Circular image 6.4 cm. diameter, plate mark 14.5 × 11.3 cm. Author’s collection.
begin page 137 | ↑ back to top notes that “in the major part” his illustrations “are printed direct from the original copperplates” (emphasis mine, p. ii). “Many” and “major” are exaggerations, but Tuer and his Leadenhall Press did specialize in acquiring old coppers and reprinting them. Several of the plates in the first edition of Tuer’s Bartolozzi and His Works (1881) are indeed printed from Francesco Bartolozzi’s own intaglio plates. The wood engravings in Tuer’s 1,000 Quaint Cuts from Books of Other Days (1886) and his Pages and Pictures from Forgotten Children’s Books (1888-89) are printed from the original blocks. Is the portrait of Thomas Hayley another of Tuer’s restrikes from the original plate?

Tuer’s print is clearly an impression from an intaglio plate. The best evidence for this is not the prominent plate mark, which could have been made from a blank copper impressed over an image produced in a different medium, but the slight relief of the ink that can be felt with the finger. This effect is caused when the paper is forced into etched or engraved lines to draw up the ink residing in them. If the original plate was used, however, Tuer has converted it into a new state. The copper was cut down on all sides from a plate mark (in An Essay on Sculpture) of 22.5 × 16.3 cm. to 14.5 × 11.3 cm., thereby conveniently eliminating the facing page number for the 1800 volume and the original imprint (Publishd June 14. 1800 by Cadell & Davis Strand). Careful comparison, using both low and high power magnification, has revealed no further differences in either the design or the remaining inscriptions that cannot be accounted for by slight differences in inking.3↤ 3 I am grateful to Robert Essick and Thomas Lange for assistance with this inspection and technical details. The delicate halo effect in the stippling along the top and sides of the medallion’s background is exactly as in the impressions of 1800. Even the smallest features of Blake’s engraved signature—for example, the gaps between the two strokes forming the “a”—and the ends of the hatching lines that extend slightly below the medallion are identical. One must allow for the slight possibility that Blake’s work was reproduced by some form of photogravure, but the context in which the print appears makes this improbable. There is no textual rationale for the inclusion of Hayley’s portrait; the only references to it appear in what is in effect a caption written specifically for the print. Thus, the inclusion of the portrait seems to have been motivated by the availability of a useable copperplate that more or less suited Tuer’s highly miscellaneous volume. No such opportunity would have presented itself if Tuer had to go to the trouble of making a photogravure plate from a print in an obscure book picturing a virtually unknown would-be sculptor. Thus, there is every reason to believe that the portrait of Thomas Hayley justifies Tuer’s claims about using the original copperplates for some of his illustrations.

As the second leaf after the title page in The Follies & Fashions explains, the volume was published in three formats. Only three “Special copies, Large Paper, crown quarto, the text printed on Brown Paper” were issued. I have not seen a copy of this format, created by Tuer as a lark, priced at the ridiculous sum of “Ten Guineas.” The next most sumptuous issue, represented by the copy now in my collection and one at the Huntington Library, San Marino, California, is “Large Paper . . ., crown quarto [25.4 × 19.2 cm.], with earliest impressions of the plates; . . . two hundred and fifty only, signed and numbered, at Three Guineas.” Last and least is “Demy octavo [22 × 14.2 cm.], . . . Twenty-five Shillings.” A copy of this third format is in the Doheny Library, University of Southern California, Los Angeles. Both quarto copies I have inspected and the single octavo copy are bound in the same decidedly unattractive quarter drab (a sort of dirty medium brown) felt over drab paper boards. The front cover and spine labels are drab canvas with the title (black) and decorations (gold) stitched in needlepoint. The most bizarre element, however, is the enormous attached bookmark ribbon, also in drab canvas with the title again in needlepoint. Tuer’s efforts to costume his production in a way compatible with the fashionable ladies in his illustrations have produced an amusing failure.

In all three copies inspected, Blake’s plate is printed on a cream wove paper, 0.16 mm. thick. Essick, in his recent catalogue of Blake’s commercial book illustrations (see n1), locates in his collection an impression on laid paper. This is in the same state as the plate in Tuer’s book and printed in the same brick red. The paper is the same cream color and has chain lines the same distance apart (2.5 cm.) as the stock used for Tuer’s letterpress, but at 0.22 mm. is slightly thicker than the text paper (0.12 mm.). Certainly the Essick impression is to be associated with Tuer’s project and not, as Essick speculates, with “separate impressions” printed by William Hayley “as memorials of his son.”4↤ 4 William Blake’s Commercial Book Illustrations 81. Essick does allow for the possibility that his impression “could have been created many years later by someone else,” as we now know to be the case. The sheet size of Essick’s print, 21.4 × 13.5 cm., is smaller than either format of the book. It may be a proof of some sort, although it could have been issued in some copies in any format, including those few with the “text” (but not the plates?) “on Brown Paper.” Bentley (see n1) lists a “proof printed in Red” of the plate from the Essay on Sculpture picturing “The Death of Demosthenes,” then in the collection of “Mr. Walter Fancutt” (575), but Essick has “been unable to locate this impression” (81). It is of course possible that Bentley made an error, particularly if he had to rely on reported information or if he were recording only plate numbers in his notes and mislabeled an impression of pl. 3 (Thomas Hayley) as pl. 2 (Death of Demosthenes). If however Bentley is correct, then it appears that at least one more of the three plates by Blake in the Essay on Sculpture survived into the 1880s and was reprinted by Tuer.

It is tempting, although perhaps futile, to speculate on how Tuer managed to acquire Blake’s plate of Tom Hayley. In most circumstances, the publisher (Cadell and Davies) or the printer (A. begin page 138 | ↑ back to top Strahan) of the 1800 volume would have retained the copperplate. Perhaps, in his searches for plates by Bartolozzi or miscellaneous wood blocks for old children’s books, Tuer simply came upon the portrait plate by accident and decided that it would contribute to the period charm he was assembling for his Follies & Fashions. If he noticed the “Blake” signature at all, it was probably of no consequence to him. By luck and happenstance, Tuer created a minor addition to the bibliography of works containing Blake’s engravings.