Blake as Craftsman and Artist: Two Exhibitions in Tokyo

William Blake (Yanagi: Blake no deai): William Blake (Great Encounter: Yanagi and Blake) [To accompany an exhibition] September 1-October 28 [1990 at Mingeikan:] The Japan Folk Crafts Museum, Komaba, Tokyo, Japan. [Tr. Kenkichi Kamijima & Teiko Utsumi.] (Tokyo: The Japan Folk Crafts Museum, 1990) 110 pp. 100 illus. 4to.1↤ 1 In this review translations of Japanese words in brackets are supplied by GEB; those without brackets are given in the originals in English. The transliterations were supplied by my friend Keiko Aoyama.

For 75 years William Blake has been the subject of great and growing excitement in Japan, until today there are more works on Blake published in Japanese than in all other non-English languages combined.2↤ 2 Blake Studies in Japan: A Bibliography of Works on William Blake Published in Japan 1911-1990 by G.E. Bentley, Jr. with the assistance of Keiko Aoyama, which will be published by the Japan Society of English Romanticism, summarizes the growth of Japanese Blake studies numerically as: 1911-19: 17 1960-69: 67 1920-29: 45 1970-79: 202 1930-39: 71 1980-89: 168 1940-49: 16 1990: 23[incomplete] 1950-59: 74 Total 683 The first great book on Blake in Japanese was William Blake by Soetsu (Muneyoshi) Yanagi3↤ 3 Mr Yanagi’s given name is represented by a character which is pronounced “Muneyoshi” in Japanese but “Soetsu” in Chinese; in Japanese he was referred to as “Muneyoshi,” but when he wrote in English he identified himself as “Soetsu.” in 1914, and the first exhibition on Blake in Japan was organized by Yanagi for The White Birch Society in 1919. There were subsequent Blake exhibitions in Tokyo in 1927 (for the centenary of Blake’s death) and 1957 (for the bicentenary of his birth), but none of these exhibitions showed originals of Blake’s art or writings.

The first exhibition of Blake’s art in Japan which dealt with original materials officially opened on 21 September 1990—and so did the second! The two exhibitions, and the volumes which accompany and commemorate them, are extraordinarily different; the first exhibition, at the Japan Folk Crafts Museum, is quiet, discrete, and very Japanese; the second, at the National Museum of Western Art, is grand, impressive, and thoroughly international, an admirable machine for pictureviewing. All Blake scholars will recognize the exhibition at the National Museum of Western Art as being of major importance, one of the really great Blake exhibitions, comparable to those in 1939 (Philadelphia), 1978 (London), and 1982-83 (New Haven & Toronto), and the catalogue is in many ways, such as illustrations and scholarly essays, greatly superior to all other Blake exhibition catalogues. But William Blake would have been bewildered by the impersonality of the building, the high-tech lighting, the hype, the fashionable crowds, and the èclat of an International Event. At the elegant opening in the capacious, anonymous foyer, diplomats rubbed shoulders with royalty, security guards were discretely omnipresent, guests nibbled appetizers and chatted of London and fashion, and a few drifted through the corridors of glory of the dazzling exhibition itself.

The exhibition at the Japan Folk Crafts Museum was altogether more humane and individually memorable. On entering the traditional Japanese wooden building, guests removed their shoes and donned soft slippers so as not to profane the glowing wooden floors. Round the walls, in gentle, natural light, were anonymous works of everyday craftsmanship, water jugs and work clothes, knives and tables and cups, exhibiting a dignified simplicity and modest integrity which justified the hopes of the founder, Soetsu Yanagi, that they would convey to others an unpretentious, traditional, and medieval beauty. Neither craftsman nor creation called out for attention, and indeed the former were largely unknown and the latter had been largely unnoticed. Nothing was decorative, and all were beautiful.

Amongst these permanent exhibits were scattered pictures by Blake, almost all of them reproductions of reproductions, often multiplied in size, and of course all of them were both decorative (that is, having no practical, mundane function) and in kind unlike anything else in the museum. Their first justification was that such works had been the first love of the founder, Soetsu Yanagi. But the inspiration of Yanagi’s son, the present director, that Blake’s works would harmonize with such folk crafts was satisfactorily justified. Little attempt was made to link Blake’s pictures to a context in Blake’s work or in western civilization, and, indeed, it was not always clear from captions at the exhibition and in the accompanying volume which works were originals and which were reproductions. This was carried so far that the only original works in the exhibition of significant importance, the plates for Dante and posthumous pulls from Songs pl. 22, 28, 30, 39 (copy o), 40, 44-46, 48 (a and b), were not even mentioned in the volume. The exhibition at the Japan Folk Crafts Museum was valuable for the demonstration of harmony between Blake’s works and traditional Japanese ways of life.

Many of the myriads of Japanese Blake enthusiasts are persuaded that there are strong similarities between Blake’s ideas and those of traditional Japan, particularly Japanese Buddhism. The Mingeikan exhibition showed the immanence of a similar simple and divine harmony in Japanese folk crafts and the art of William Blake.

The exhibition at the Museum of Western Art might have been held in any sophisticated metropolis in the world, and it would have done any of begin page 169 | ↑ back to top them proud. The Museum is set in the Ueno Park, a cultural haven with galleries, trees, a festival hall, a baseball-field—and pink folk in head-bands sitting on the ground offering handmade flutes and jewelry for sale to the gadget-happy Japanese. The Museum itself is modern, air-conditioned, and impressive, with dim rooms beautifully lit in the latest style. Panels protruding from the walls held individual plates of the Songs for intimate viewing, and the great color-prints were shown in a spaciousness of setting which did them justice. One of the most exciting things about the exhibition was that it showed two versions of some prints, such as “Glad Day” from the British Museum (colored), and National Gallery, Washington (uncolored), or Europe from the British Library (uncolored) and Glasgow University (colored), so that it was possible to compare the originals as would never be possible in their home institutions. Eight of the great color prints were reproduced from seven collections in Altadena, Edinburgh, London, Malibu, New Haven, and New York. Even more exciting, a number of major works were shown which have never been exhibited before, such as the newly discovered Large Blake-Varley sketchbook, or have never been seen outside of their home institution, such as Songs of Innocence (Z). Works were borrowed from round the world, from institutions in Australia (1), Germany (1), Great Britain (12), Japan (3), and the United States (17), not counting anonymous lenders, and viewers could range over Blake’s art from his apprenticeship to his noblest maturity, from sketches to watercolors to colorprints, from single pictures to books in Illuminated Printing.

Some Blake-lovers hoped that the exhibition would include important originals which are known or suspected to have emigrated to Japan, but such hopes were disappointed. The only works from Japanese collections were Blair’s Grave (1808), Young’s Night Thoughts (1797), Job (1826), and Dante (?1838), which are sufficiently 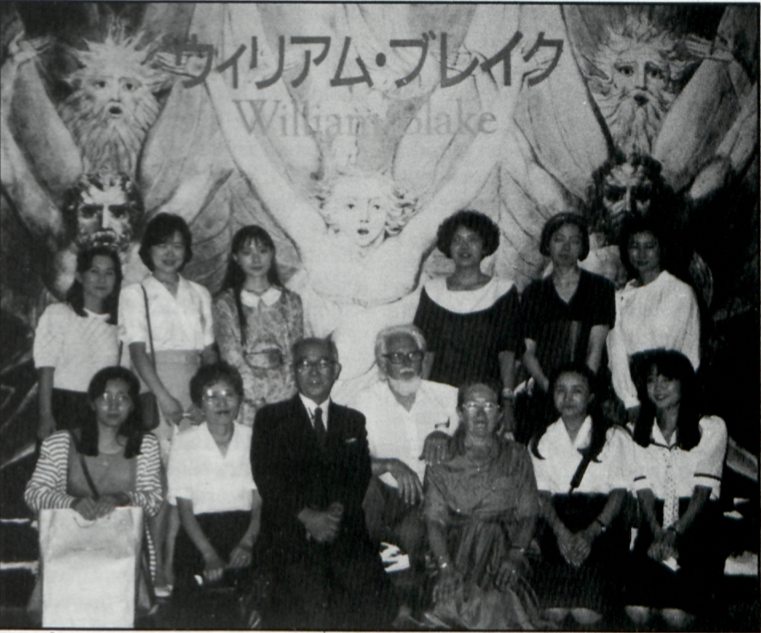 The giant “William Blake” poster at the entrance to the exhibition in the National Gallery of Western Art (Tokyo), with Keiko Aoyama, Dr. and Mrs. Bentley, Professor and Mrs. James Hiao Kodama, and Professor Kodama’s class (September[e] 1990).
common to be owned by mere mortals. The exhibition did not reveal any Blake collection in Japan comparable to the major Shakespeare collection in Tokyo, or even any very significant minor collections of original materials. But it is likely that the exhibition will foster the formation of such collections.

The exhibition was “commissioned” by Gert Schiff, who, alas, was too ill to see it and who died shortly after it closed. When Dr. Schiff’s illness prevented him from completing the catalogue, the work was taken up on very short notice by Martin Butlin, who is responsible for an unidentified third of the entries in the catalogue. The volume has important essays by Gert Schiff, Martin Butlin, Robert Essick, and David Bindman and tantalizingly brief contributions by others such as Detlef Dörrbecker and Joseph Viscomi. Those by Butlin and Essick are largely distillations of their scholarship elsewhere, but those by Schiff (in the 2nd edition), Bindman, Dörrbecker, and Viscomi are significant new contributions to Blake scholarship, especially the last two. The most original entry in the catalogue (No. 31) is for the design usually called “Hecate” but here called “The Night of Enitharmon’s Joy”:

The likeliest explanation of the print is . . . that it allegorizes Enitharmon’s scheme to enslave mankind by way of sexual repression.

Readers who do not read Japanese must hope that an edition will be published in English for access to the texts, but they do not have to wait to profit greatly from the catalogue, for the reproductions include virtually everything in the exhibition. Further, the color plates include reproductions (usually reduced in size and therefore not facsimiles) for the first time of America (A), Europe (“A,” i.e., “a”), Song of Los (C), Songs of Experience (H), Songs of Innocence(Z), and Hayley’s “Little Tom the Sailor” (Schiller copy, the only known colored copy). The catalogue is therefore of considerable value for its unique reproduction of whole Illuminated books. But in the exhibition, there were few entries of begin page 170 | ↑ back to top books qua books. Most of the works in Illuminated Printing were shown broken up, as collections of pictures.

We are very fortunate to have the reproduction of Songs of Innocence (Z), which has not been seen outside the royal library in Munich since about 1840 and which was only recently identified as an original.

The two Blake exhibitions were extraordinarily interesting in their different ways. That at the National Museum of Western Art is a major contribution to Blake understanding, a fitting last accomplishment for Gert Schiff, and the catalogue is wonderfully valuable even for those who do not read Japanese. That at the Japan Crafts Museum is a far more idiosyncratic accomplishment—and perhaps more fitting for the idiosyncratic William Blake.

The bilingual contents of the Japan Folk Crafts Museum volume consist chiefly of (1) Sori Yanagi [the son of the founder], “Goaisatsu: Foreword” (3); (2) messages from the Prime Ministers of Britain and Japan, the British Ambassador to Japan, and the Director of the British Council4↤ 4 Both exhibitions were part of what was called “UK90: A Celebration of British Arts.” (4-7);(3) Bunsho Jugaku, “‘William Blake to Yanagi Muneyoshi tono oinaru deai’ ten wo yorokobu: A Delightful Exhibition on ‘A Great Encounter of William Blake and Soetsu Yanagi’” (9); (4) G. E. Bentley, Jr., “William Blake to sozoryoku no teikoku: William Blake and the Empire of the Imagination” (10-21); Kimiyoshi Yura, “Yanagi shiso no shihatsu eki: ‘William Blake’: The Great Encounter: Soetsu Yanagi and William Blake” (22-31), adapted from Yanagi Muneyoshi Zenshu [The Complete Works of Muneyoshi Yanagi], Vol. IV (1981); Anon., “Zuhan mokuroku: List of Plates” (98-102).

N.B. There is no catalogue of the exhibition as such; some of the works exhibited, such as posthumous pulls for Songs of Innocence and of Experience and the Dante plates, are not mentioned in the book. The 100 plates, 25 large ones in handsome color, include 16 for The Gates of Paradise.

There are 104 entries in the catalogue, some of them (e.g., Innocence) representing many pages exhibited. The 441 plates include color reproductions (mostly reduced in size) of America (A), Europe (a and B), Marriage (D), Song of Los (C), Songs of Experience (H), Songs of Innocence (Z), and Hayley’s “Little Tom” (Schiller copy), plus black-and-white reproductions of copies of the Blake plates for Blair, Dante, Job, Virgil (17), and Young.