A new ballet of Job, choreographed by David Bintley, was given its world premiere by the San Francisco Ballet on 17 March 1992. Like the earlier Job ballet1↤ 1 See Sir Geoffrey Keynes, “Blake’s Job on the Stage,” Blake Studies (Oxford: Clarendon Press, 2nd ed., 1971): 187-95; Mary Clarke, “The Job Ballet,” Blake 12 (1978): 18-25. In the San Francisco Ballet program there appears an article “Vaughan Williams, William Blake, and Job” by Allison Sanders McFarland (Performing Arts 5 (1992): 10-11.) that was choreographed by Ninette de Valois after a scenario by Geoffrey Keynes, Bintley’s work is set to the music of Ralph Vaughan Williams and is divided into nine scenes. Unlike the Keynes-de Valois work, it is not a translation of Blake’s designs into balletic terms but is rather a re-interpretation of the biblical story. Nevertheless the presence of Blake’s visual conceptions lingers in a number of places, and there are some interesting thematic parallels and contrasts as well.

Hayden Griffin’s imaginative set is meant to recall the world of Andrew Wyeth, as is immediately established by the visual quotation of Christina’s World as the curtain rises. The front of the stage is flat, but the rear part is steeply raked and covered with an astroturf field. Further back, we later learn, is an abyss. The nine scenes proceed as follows.

1. “Hast Thou considered my servant Job?”

Job and his family seem to be posing for a family portrait— a brilliant reworking of the family scene in Blake’s Job 1—with the unseen photographer in the position of the audience. One daughter spontaneously dances out of the group, then sees that she has forgotten herself, and rejoins the family’s placid regidity. The Sons of the Morning, led by the Messenger, advance in wedge-shaped formation. They are androgynous, danced by both males and females wearing body suits, and in their postures very suggestive of the morning Stars of Blake’s Job 14.

2. “So Satan went forth from the presence of the Lord”

Satan moves out from among the family, who never see him. He dances a dramatic, intricate solo (illus. 1), brilliantly performed by Ashley Wheater. As in the Keynes-de Valois Job, Satan’s role is conceived as intensely athletic.

3. “Then came a great wind and smote the four corners of the house and it fell among the young men and they were dead”

The house is a two-dimensional Midwestern-style farmhouse. “Job’s sons and their wives dance a formal, slightly voluptuous minuet” (Performing Arts, 13). Satan moves among them and strikes each dead with a touch. The bodies are discovered by Job and his wife. Job hunches eloquently in dazed despair. Jim Sohn portrayed Job here as throughout with immense pathos and dignity.

4. “In thoughts from the visions of the night . . . fear came upon me and trembling”

Job sits on a bench at stage right (much as in Blake’s engraving 11) and then is attacked by visions of Death, Famine, and Plague dispatched by Satan (illus. 2).

5. “There came a messenger”

The messenger is not Blake’s running athlete but the tall, graceful Muriel Maffre, who also leads the Sons of the Morning in scences 1 and 7. After the destruction of his former prosperity, Job surveys his fields looking something like Gary Cooper in a Dust Bowl movie.

6. “Behold, happy is the man whom God correcteth”

The three comforters appear, wearing round black hats and black frock coats suggestive of some religious sect. Their hands are at one point raised high as in Job engraving 7; at another they point accusingly as in engraving 10. Above, Satan is revealed in the heavenly throne—a disk in which he stands like Vitruvian man.

Elihu’s lyrical dance commences. His role, which continues into the following scenes, is much larger than in Blake’s illustrations, the Keynes-de Valois ballet, or, for that matter, the biblical text. In Bintley’s words “Elihu’s beauty, purity, and innocence becomes the vessel for God’s reply to Job” (San Francisco Ballet cast list for March 17, 1992). All this was eloquently conveyed by Bruce Sansom. At one point, Elihu seems to become the crucified Christ supported by the Messenger (illus. 3).

8. “All the Sons of God shouted for Joy”

Satan falls from the celestial disk and then disappears into the abyss at the back of the stage. The 14 Sons of the Morning, led by the Messenger, reappear, their arm and hand gestures especially reminiscent of Blake’s famous image.

9. “So the Lord blessed the latter end of Job more than his beginning”

After the joyful music stops, Job goes to the rear of the stage and seems to muse while gazing into the abyss.

Neither Blake nor David Bintley accepts the meaning of the Book of Job as it is usually understood. The message of God from the whirlwind is satirized in Blake’s interpretation and entirely absent from Bintley’s. For Blake the meaning lies in the casting off of a past self and in regeneration through suffering; for Bintley it is the divinely human Elihu who transforms Job. God, shown by Blake (and by Keynes-de Valois) to be Job’s ego projection, does not appear in Bintley at all. Although Bintley’s brilliant new Job is not a recasting of Blake’s designs, it clearly bears some suggestion derived from Blake’s images and conceptions. It would be fascinating to see it on the same program with the Keynes-de Valois work. 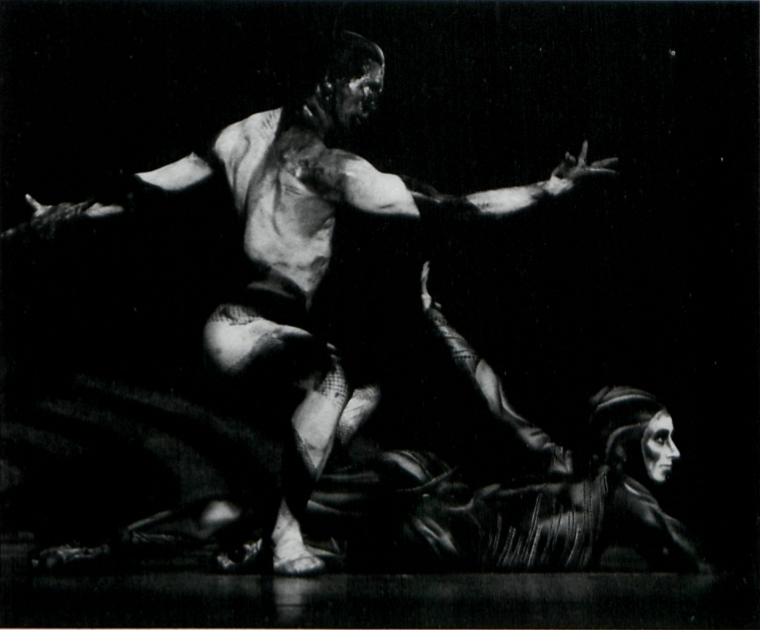 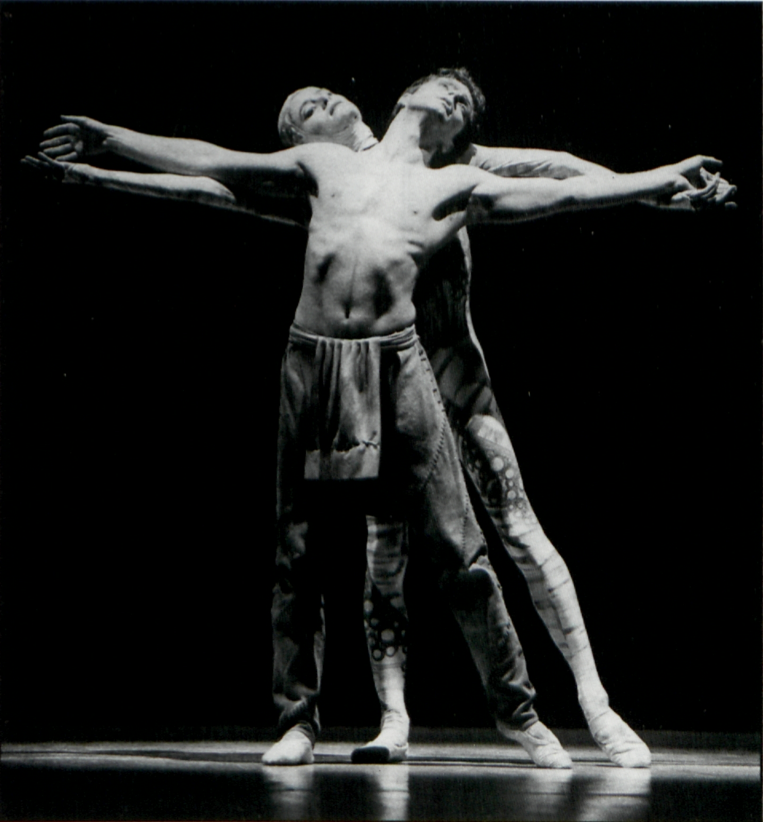 3. Bruce Sansom as Elihu, Muriel Maffre as The Messenger.   Photo by Marty Sohl c. 1992. Reproduced by permission of the San Francisco Ballet.