There seems to be a rule in Blake’s work that the less important the project and the more removed from his fundamental concerns, the more documentary material or the more preparatory sketches survive. This is the case with the various illustrations to William Hayley’s literary projects; it is rapidly becoming the case with Commins’s An Elegy. No sooner had I passed the final proofs from my article in the summer issue of Blake1↤ 1 Martin Butlin, “Two Newly Identified Sketches for Thomas Commins’s An Elegy and Furthered Rediscovered Drawings of the 1780s,” Blake 26 (1992): 21-24, the recto and the verso of the drawing in the U.S. repr. pls. 2 and 3, Blake’s final engraving of 1786 repr. pl. 1. than another sheet of drawings was brought into Christie’s bearing no fewer than three further drawings related to the project.2↤ 2 Sold at Christie’s, London, 17 November 1992. 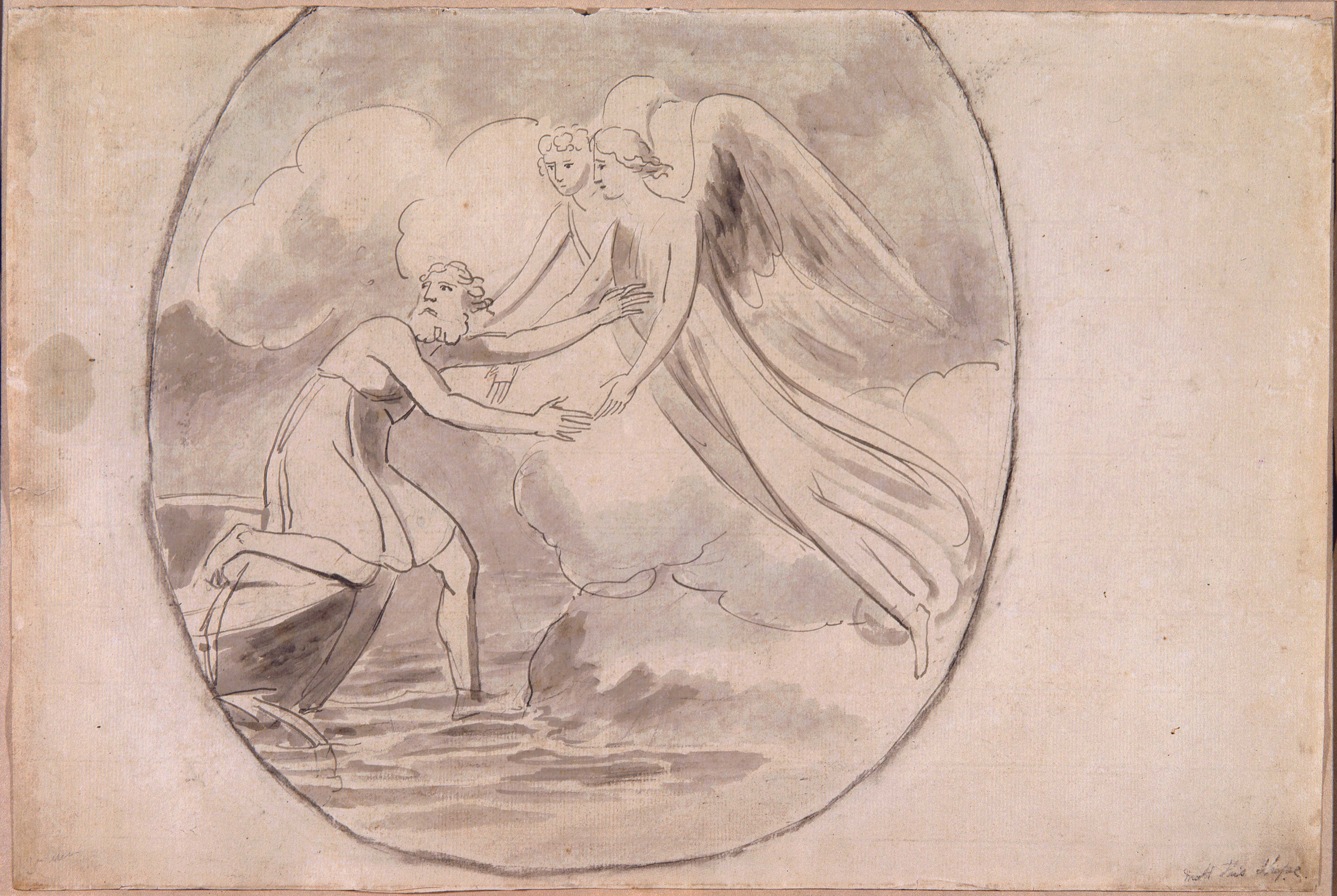 On the recto, circumscribed in a drawn circle, is a variation of the drawing of an old man getting out of a boat, though in reverse. Unlike the vertical oval composition from the Cunliffe collection now in the U.S., the two angels welcoming him are airborne and hover, set against a cloud, over a bare promontory; there are no trees behind. This drawing is in pen and wash. On the reverse, in pencil, there are a number of drawings including one of the young man approaching the shore in his boat, this time in the same direction as that on the drawing from the Cunliffe collection. The figures in the center of the compositions seem to be part of the same composition and show two figures standing on the shore, seen against a cloud as is the case of the angels on the recto. To the right and apparently slightly larger in scale and therefore not part of the same composition 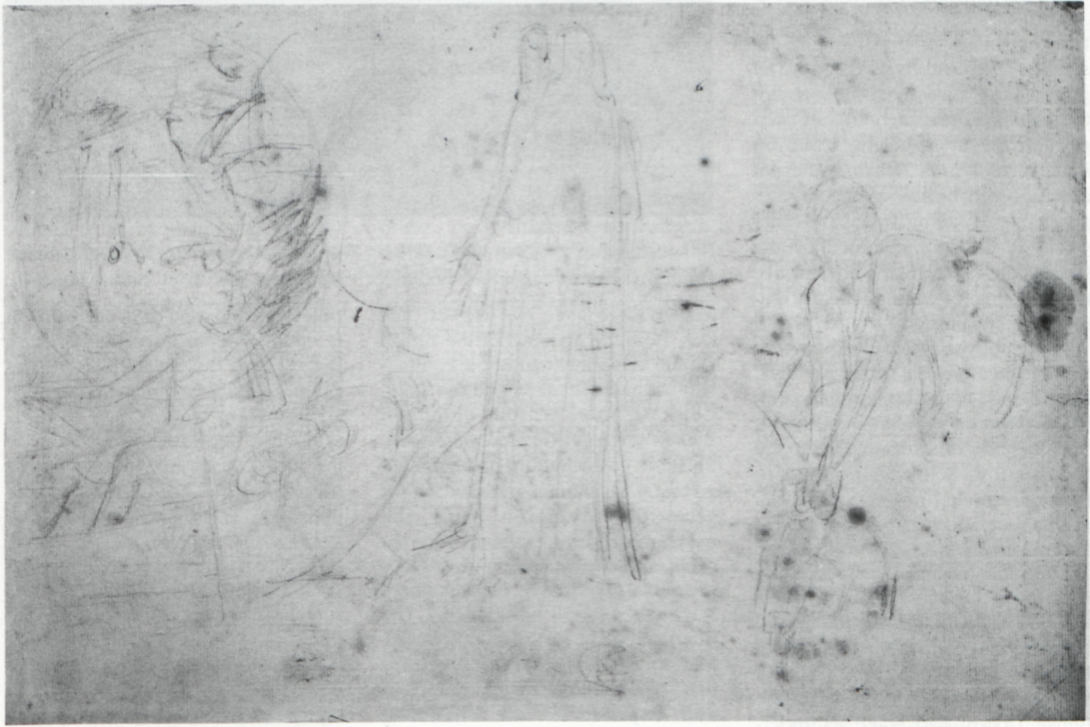 2. Sketches for Commins’s An Elegy and other drawings, c. 1786 (verso of illus. 1).   Pencil, 30.7 by 46.0 cm. Sold at Christie’s 17 November 1992.
are two sketches for what seems to be the same figure, stooping over with arms held down close together; this figure, perhaps a reminiscence of the two figures pulling in nets in Raphael’s tapestry cartoon of The Miraculous Draft of Fishes, could represent a figure leaning down to secure the boat in the main drawing but alternatively could be a sketch of a completely different idea such as the figure of Simeon in Joseph Ordering Simeon to be Bound, of which there is both a water color sketch and a final version exhibited at the Royal Academy in 1785.3↤ 3 Martin Butlin, The Paintings and Drawings of William Blake (New Haven, CT, and London: Yale UP, 1981) nos. 156 and 158, repr. pls. 184 and 186. Finally, and what clinches the connection of the drawings in the U.S. with the engraving for Commins’s An Elegy, there is a drawing on the left hand side of the paper, to be seen upside down, of an upright oval composition corresponding closely to that final engraving; this drawing is much more summarily executed than the other drawings on the sheet.

The order in which the drawings on the two sheets were made is not altogether clear. However, it is the circular, more heavily drawn version of the old man getting out of the boat that seems to be the later of the two versions of that composition. The clouds behind the airborne angels in this circular drawing recur behind the similar figures welcoming the young man rowing his boat towards the shore on the verso of the newly discovered sheet, but whether this comes before or after the version of that composition from the Cunliffe collection in which there are no angels but in which there are trees behind is uncertain, though it does seem to lead on more logically to the final engraving where again there are no angels, rather the young man’s wife and child. It is likely that this last, begin page 44 | ↑ back to top engraved version of the composition was the last to be developed, the rough preparatory drawing for it having been squeezed into a corner of the verso of the new sheet, overlapping the larger sketch of the young man in the boat.

In my previous article, I suggested that the sheet of drawings in the U.S. had been bought at the Cunliffe sale in 1895 by the New York dealer Frederick Keppel. This would suggest that it was not the drawing held, back in London, by Messrs. Robson in 1913. Now we have a new candidate for this last, the drawing recently sold at Christie’s.