A small color-printed version of the design at the head of Urizen plate 3—usually known as “Oh! Flames of Furious Desires” on the basis of an inscription, not by Blake himself, on the back of the version from the collection of Sir Geoffrey Keynes now in the Fitzwilliam Museum, Cambridge (B 261 4)1↤ 1 All references in this form are to Martin Butlin, The Paintings and Drawings of William Blake, 1981, where the works are illustrated in the second volume. —has reappeared in a private collection. This print was acquired at Sotheby’s on 17 December 1970, lot 14, when it was catalogued as being merely by “Blake,” at that time a polite way of saying that the work was not thought to be by the artist indicated. However, a recent direct comparison between this work and the version from the first copy of the Small Book of Designs in the British Museum (B 260 9) suggests that it is a genuine second pull, similar in the color printing and largely following the British Museum print in the subsequent application of water color and ink, probably from the point of a fine brush, to define the outlines. This would relegate the version in the 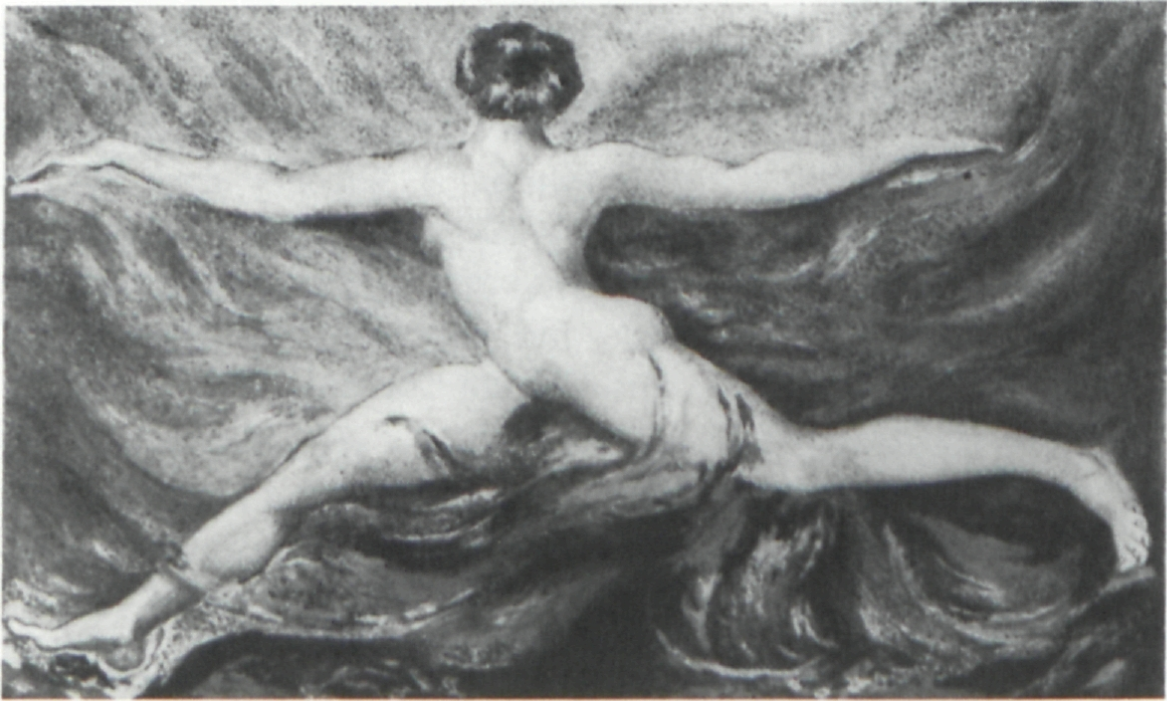 1. “‘Oh! Flames of Furious Desires,’ Plate 3 of Urizen,” c. 1796.   Color-printed relief etching finished in ink and water color, 6.1 × 9.9 cm. Private collection, Great Britain.
Fitzwilliam Museum, which I previously suggested2↤ 2 See Martin Butlin, “A New Color Print from the Small Book of Designs,” Blake 26 (1992): 19. was a second pull from the original coloring, to third position in the sequence of pulls; the coloring is thinner and the outlining in ink is more extensive, extending to the modeling of the back and limbs, while the hair, unlike the dense, dark hair of the British Museum and newly discovered versions, is looser and fairer.

Unfortunately both the new version and the Fitzwilliam Museum version have been trimmed to the border of the design so that there is no possibility of seeing whether the distinctive framing lines and page numbers found in the second copy of the Small Book of Designs can identify whether either of these two designs belonged to that copy. I had presumed that the Fitzwilliam Museum version came from the second copy of the book but the closeness of the new version to that in the first copy in the British Museum suggests that it may have been not only the second to be executed but also the print incorporated in the second book.

One puzzle remains. The figure in the new version is distinguished by a small but quite distinct female breast. No such feature appears in the Fitzwilliam Museum version although close inspection reveals that there is a putative breast in the British Museum version. The possibility that the figure is female can also be read into at least some of the copies of the original book of Urizen as well. Up to now the figure has always been identified as a youth, for instance in the detailed analysis by David Erdman,3↤ 3 David V. Erdman, The Illuminated Blake (London: Oxford UP, 1975) 185. but the rediscovered design introduces a new element of ambiguity.

Suspicions that the new print might be a copy, like that in the Tate Gallery which is a direct copy of the version in the Fitzwilliam Museum,4↤ 4 See Martin Butlin, William Blake 1757-1827 (Tate Gallery Collections: Volume 5, London, 1990) 80-81, no. 24. are dispelled by the presence of a typically undefined pencil sketch on the back of the paper, which is itself discolored, apparently from having been mounted on a wood-based card or board for a considerable period. In style and apparent purpose the drawing is particularly close to that for the title page of The Song of Los (B 232 verso) though it is difficult to identify it with any more finished composition. It does, however, bear some resemblance to the skeletal form on plate 8 of Urizen. 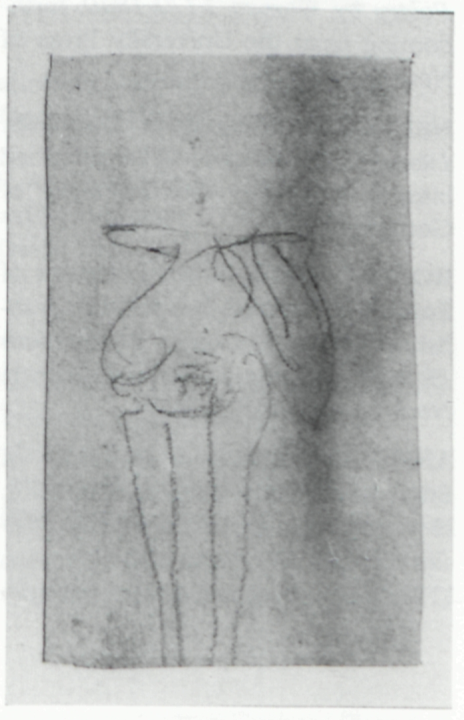