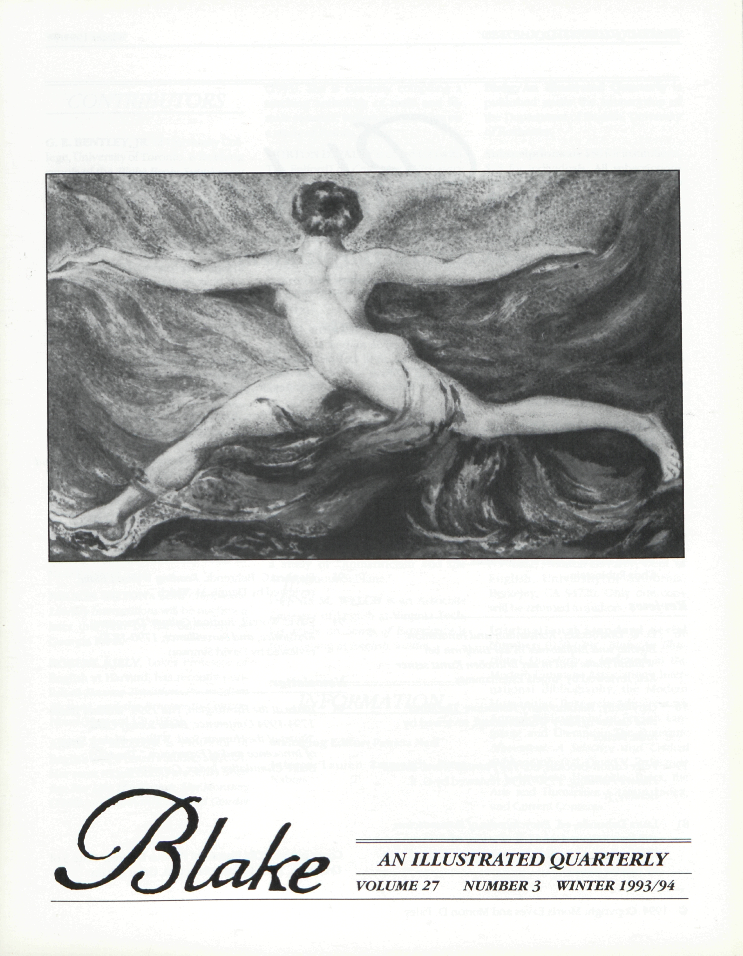 G. E. BENTLEY, JR. of University College, University of Toronto, is finishing proofs of the Blake Books Supplement and, as the bibliographer of Blake, would much like to receive information about or copies of publications by or about Blake, particularly obscure, ephemera, or non-English ones.

MARTIN BUTLIN retired as Keeper of the Historic British Collection at the Tate Gallery in June 1989. He is author of The Paintings and Drawings of William Blake (Yale UP, 1981), and other works on Blake and J. M. W. Turner.

ANGELA ESTERHAMMER, Assistant Professor in the Departments of English and Modern Languages at the University of Western Ontario, is completing a book on performative language and verbal authority in the work of Milton and Blake.

PAULA R. FELDMAN is Professor of English at the University of South Carolina, co-editor of The Journals of Mary Shelley 2 vols. (Oxford: Clarendon Press, 1987), and editor of British Poetry by Women 1770-1840, forthcoming from the University Press of New England.

NELSON HILTON’s Lexis Complexes: Literary Interventions will be published later this year by the University of Georgia Press.

ANNE K. MELLOR is Professor of English and Women’s Studies at UCLA. Her most recent books are Mary Shelley: Her Life, Her Fiction, Her Monsters (1988), and Romanticism and Gender (1993). She is currently compiling a teaching anthology of male and female romantic writers and working on a study of Joanna Baillie.

MORTON D. PALEY is co-editor (with Tim Fulford) of Coleridge’s Visionary Languages, a festschrift in honor of John Beer.

CHRIS RUBINSTEIN, a solicitor by profession, and an active member of the Blake Society at St. James’s, London, England, has made a particular study of Blake’s philosophy.

DAVID SIMPSON, Professor of English at the University of Colorado, Boulder is author of Romanticism, Nationalism and the Revolt Against Theory (Chicago UP, 1993).

WARREN STEVENSON, University of British Columbia, is the author of Poetic Friends: A Study of Literary Relations During the English Romantic Period. He has recently completed a study of “Romanticism and the Androgynous Sublime.”

DENNIS M. WELCH is an Associate Professor of English at Virginia Tech; his article on Songs of Experience is forthcoming in English Studies.

Blake/An Illustrated Quarterly is published under the sponsorship of the Department of English, University of Rochester.

Subscriptions are $50 for institutions, $25 for individuals. All subscriptions are by the volume (1 year, 4 issues) and begin with the summer issue. Subscription payments received after the summer issue will be applied to the 4 issues of the current volume. Foreign addresses (except Canada and Mexico) require a $8 per volume postal surcharge for surface mail, a $18 per volume surcharge for air mail delivery. U.S. currency or international money order necessary. Make checks payable to Blake/An Illustrated Quarterly. Address all subscription orders and related communications to Patricia Neill, Blake, Department of English, University of Rochester, Rochester, NY 14627.