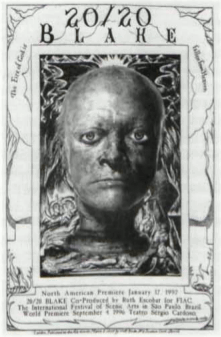 20/20 Blake, a dramatic and musical performance based on the life and work of William Blake, recently concluded a production at the Civic Center Theater in San Francisco. Perhaps the most innovative feature of this lush scenic production, written and directed by George Coates, is its digital manipulation of Blake’s paintings and engravings to create the illusion of three dimensions when viewed by the audience through special 3-D glasses. Familiar images from Blake’s illuminated books are magnified to enormous size and projected onto the stage, thus enabling the performers to walk into, through, and behind the engravings. This technique, initially somewhat disorienting to the observer, is nevertheless effective in drawing the audience begin page 39 | ↑ back to top into and across the uncertain boundaries between Blake’s lived and imagined worlds.

20/20 Blake does not attempt a linear narrative of Blake’s life story, but rather presents a series of climactic moments that are vividly realized in choral music performed by the San Francisco Chamber Singers and represented in dance and pantomimic gesture by the actors. The music is challenging and eclectic, weaving together traditional plainsong and orchestral music with elegantly embroidered lyrics from Blake’s poetry, and even at times incorporating a fourpiece rock-and-roll band with Urizen playing the bass guitar. There is very little spoken dialogue, although Robert G. Kennedy gives a fierce and compelling portrayal of William Blake as a strenuously embattled poet-artist at odds with the universe; he rattles off Proverbs of Hell and related apothegms in a pithy counterpoint to the lush visual and musical texture of each set-piece. The other characters portrayed on stage are his wife Catherine (who doubles as Enitharmon), Mr. Wedgwood (appearing mainly as a villainous enforcer of bourgeois artistic standards), Thel, and Los. The latter two characters provide a lavishly choreographed rendition of their eponymous books, allowing an escapist and frankly erotic fantasy to emerge briefly before it is beaten back into submission by the nay-saying likes of Wedgwood and Urizen.

This production is unlikely to appeal to those Blake scholars who insist on a faithful adherence to Blake’s subtlety of design and meaning, since the ethos of his life and work is painted here with rather broad strokes. But this production is both innovative and appealing in its own right, and it does comprise a sustained effort to represent the passionate intensity of Blake’s poetry in a dynamic contemporary medium. It certainly reaches out to new audiences who might otherwise never encounter the rich imagery of Blake’s illuminated books.