William Blake was a notably peaceable citizen, for all his radical, antinomian views. He may have believed that “One Law for the Lion & Ox is Oppression,’”1↤ 1 Marriage (?1790), pl. 24 (William Blake’s Writings [1978], 27). and that “All Penal Laws court Transgression & therefore are cruelty & Murder,’”2↤ 2 Annotation to Watson (William Blake’s Writings [1978], 1419). but he lived quietly within the laws. Only twice, so far as we know, did he offend the majesty of the law, and both times he was released without a stain upon his character—though some scholars suspect that on the second occasion, when he was tried for sedition in 1804, he may have escaped through a technicality rather than through genuine innocence.

The second arrest, in 1804, is moderately well known because Blake himself wrote about it and a good number of documents survive.3↤ 3 Blake Records (1969), 121-149, and Blake Records Supplement (1988) 24-28. The first however, is more slightly known, the facts are altogether sparser, and a new fact has recently appeared which allows us for the first time to set it firmly in context.

When Blake was in his early twenties, he made friends with number of rising young artists such as Thomas Stothard, the book-illustrator, John Flaxman, the sculptor, and George Cumberland, the inventor and artist. It was perhaps about September 1780 that this first incident occurred. According to Stothard’s daughter-in-law, Stothard would occasionally spend a few days with his friends in sailing up the Medway, landing and sketching as they pleased. In one of these excursions he was accompanied by his old friend Mr. Ogleby, ↤ 4 Mrs. [A.E.] Bray, Life of Thomas Stothard, R.A. (London, 1851), 20-21, reprinted in Blake Records (1969), 19-20.

and Blake, . . . Whilst the trio were one day engaged with the pencil on shore, . . . some soldiers . . . very unceremoniously made them prisoners, under the suspicion of their being spies for the French government; as this country was then at war with France. . . . There were they detained, with a sentinel placed over them, until intelligence could be received from certain members of the Royal Academy, to whom they appealed to certify they were really peaceable subjects of his Majesty King George, and not spies for France.4

Stothard made an etching of his sketch which is very rare. One copy is in the Balmanno Collection of Stothard in the 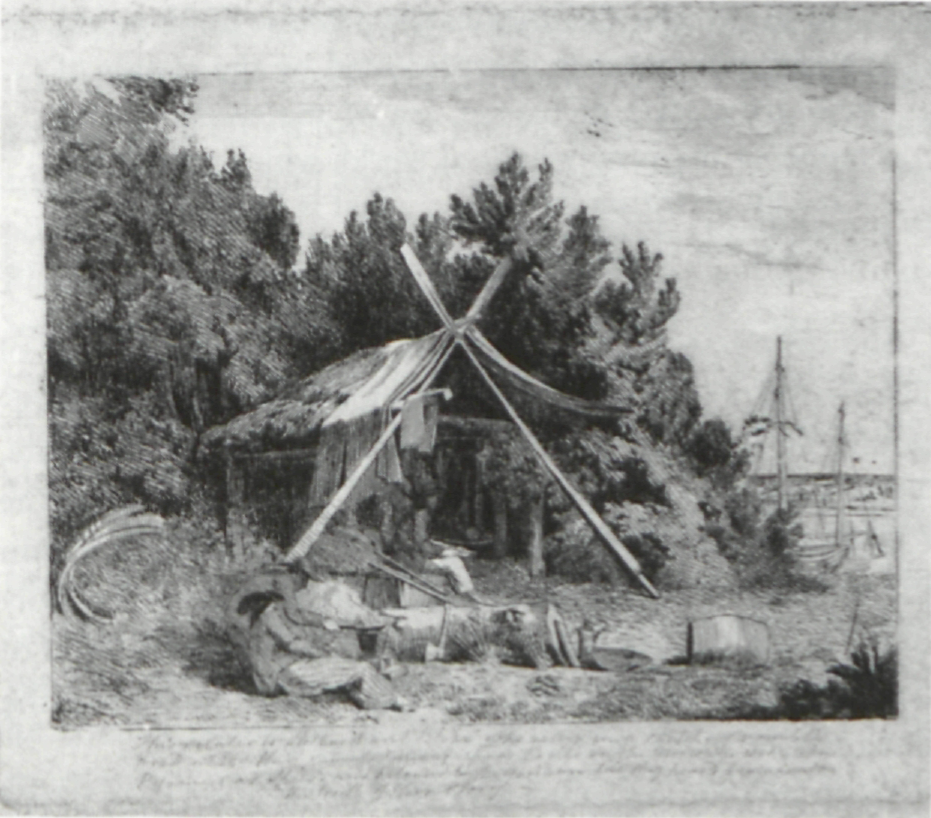 1 Thomas Stothard’s etching of his own design representing occasion when he, Blake, and another friend were arrested while on a sketching expedition on the Medway.   This copy, from the collection of Robert N. Essick, emphasizes that the incident took place at Upnor Castle.
British Museum Print Room,5↤ 5 This is probably the copy reproduced by Mrs. Bray. another is in the Rosenwald Collection of the U.S. National Gallery of Art,6↤ 6 For its very puzzling inscription, see Blake Records (1969), 19 n.4; its identification of the third member of the sketching party as “Parkes” may refer to Blake’s fellow-apprentice and later partner James Parker. a third is with a collection of prints and drawings by Stothard formed by George Cumberland in the Fitzwilliam Museum, and a fourth was recently acquired by Robert N. Essick.7↤ 7 Described and reproduced in Robert N. Essick, “Blake in the Marketplace, 1994,” Blake 28 (1995), generously shown me in typescript. This last previously unknown copy has an inscription of some importance, though its authorship and authority are unknown:

This relates to Stothard and Blake who went on a sketching ramble and while they . . . [illegible] Upnor Castle on the Medway were taken Prisoners as spies and detained by the garrison till they heard from London the truth of the story [see pl. 1].

This is, of course, a much abbreviated account but it emphasizes the vital detail of where they were arrested, and this in turn helps to explain why they were arrested. Until we knew where the incident took place, it seemed a somewhat wanton abuse of military power, that such peaceable artists should have been so rudely accused and confined.

The Medway flows 60 miles east-north-eastward, mostly through Kent and if the sailing artists were “sailing up the Medway” they must have begun at or near the mouth, at begin page 83 | ↑ back to top the estuary of the Thames. They had not travelled very far when they were arrested, for Upnor Castle, on Upnor Reach, is only a few miles from the Channel, just east of Rochester, on the north bank of a sharp bend of the Medway. The river here was wide and bucolic, and Upnor Castle was certainly picturesque, but the military significance of Upnor Castle and its neighborhood would have been plainly visible to the most unworldly artist. Chatham Docks, “the chief arsenal of the Royal Navy of Great Britain . . . one of the most considerable in the world,”8↤ 8 Anon., The Picturesque Beauties of Great Britain: Illustrated by . . . Original Designs Taken upon the Spot: Kent (London: George Virtue . . . [1830]) 19-20. is just across the river from Upnor Castle, and on occasion as many as 40 men-of-war might be seen moored there together.

↤ 9 John Harris, The History of Kent, Vol. I (London: D. Midwinter, 1719) 1: 386. According to Harris, “In the Castle are about 37 Guns,” and down river are several other batteries, but eighty years later the armaments of the Castle had been allowed to deteriorate to a pathetic state.

UPNOR-Castle, is . . . about over against the famous Dock in Chatham; it was built by Queen Elizabeth, in the Third Year of her Reign [1561], for the Defence of the River Medway; where the greatest Part of the Royal Navy usually lye at their Moorings, and for the Security of the aforesaid Dock.9

The docks were established in the reign of Charles II, and they were vigorously extended during Blake’s youth and early manhood. Anyone reading the newspapers in London a few miles away was likely to have been aware of such developments.

In 1758, when this country was threatened by invasion from the French, the elaborate fortification, called the Lines, were commenced, extending from the Medway, above the Ordnance Wharf, measuring half a mile in width and a mile in breadth, extending beyond the limits of the Dock-yard, where they again unite with the river. Within this area, besides the naval establishments, are included the Upper and Lower Barracks, the church of Chatham, and the hamlet of Brompton; containing about five hundred dwellings. Various important additions have since been made, as in 1782 an Act passed for the purchase of lands, for the further security of this great natural depôt.10

However, Stothard and Blake were not the only artists to ignore the presence of military power at Upnor Castle, to their peril. In 1791 Samuel Ireland made a series of Picturesque Views on the River Medway from the Nore to the Vicinity of its Source, and when he came to Upnor Castle he had an experience strikingly similar to that of Blake and Stothard some 10 years before. He made a sketch of Upnor Castle with impunity, but his next sketch was fraught with peril.

Upnor castle, considered as a pleasing object of the picturesque kind, on the banks of the river, draws our warmest commendation, but, as a place of natural defence, I fear, has never answered any purpose whatever; yet it must be allowed to have its merits as a place of snug security for the governor, storekeeper, clerk of the cheque, &c. &c. The governor has command of all the forts on the river except Sheerness. . . .
Such was the shamefully neglected state of the castle that there were only four guns fit for use, mounted within it, at the time the Dutch made their bold attempt up the river in the reign of Charles II. At present it has no platform, nor yet one gun mounted, which, for the author of this work, was probably a fortunate circumstance, as he had fixed his station very near it while making the annexed sketch of the castle.
Other mischiefs, however, seemed to await him, for, while he was peaceably situated beneath the stern of a man of war, to keep under the wind, he was visited by a person from on board, who claimed the privilege of taking him before the Commissioner in Chatham yard, to answer for his rash attempt on this noble place of defence.
Having satisfied Commissioner Probyn that he had no insidious design against the navy, he was suffered to depart in peace ....11

It is perhaps little wonder that while Ireland was sheltering from the wind under the stern of a man-of-war his bona fides were suspected.

In Stothard’s sketch there is no indication of Upnor Castle, but presumably it is just out of sight. There are only two figures there, one of them apparently still sketching, but of course Stothard himself, who made the sketch, is invisible.

But what are these artists doing making landscape-sketches at all? Stothard was a figure painter, whose forte was (or became) charming book-illustrations on a small scale, and Blake is scarcely known to have made landscapes. How curious that these young men whose penchant was so strongly for the human figure should have been out sketching landscapes at all.

Of course the Academy had not done anything of the kind. But the unworldliness of these young men, blithely making careful sketches (like that in Stothard’s etching) of military fortifications of the greatest naval base in the world in time of war, almost surpasses comprehension. At least it might appear so to naval intelligence, if that is not an oxymoron.