The two greatest English printers during William Blake’s lifetime were William Bulmer and Thomas Bensley, and each was responsibile for a number of works of major importance in Blake’s career and in the history of fine printing. These included for Bulmer three major publications by Boydell: Hogarth, Works (1795), Shakspeare, Dramatic Works (1791-1802), and Boydell’s Graphic Illustrations of the Dramatic Works of William Shakspeare ([?1803]; 1813). For works printed by Bensley Blake did even more, and more important, work: Lavater, Aphorisms (1789), Lavater, Physiognomy (1789-98; 1810), two advertisements for Blair’s Grave (1805) plus Blair, Grave (1808; 1813), and Gay, Fables (1793 [i.e., 1810]). In the cases of the Boydell Shakspeare and Lavater’s Physiognomy, the interest of contemporaries and posterity was not infrequently as much in the typography and printing as in the illustrations. Such fine printing is of major importance in Blake’s professional context.

From the moment in March 1790 that he established the Shakspeare Press in Russell Court, Cleveland Row, St James’s, William Bulmer was regarded as a fine begin page 95 | ↑ back to top printer, and this reputation has survived him by a century and a half.1

He had the enormous advantage that he was associated ab initio with John Boydell’s proposals for an heroic national edition of Shakspeare’s Dramatic Works (1791-1802), with illustrations by the best designers and engravers (including Blake) in England, one of the most ambitious fine book projects ever undertaken in Britain. He did not so much exemplify the best standards of English printing; he substantially created them. Boydell said in his 1789 Shakspeare Prospectus,

At present, indeed, to our disgrace be it spoken, we are far behind every neighbouring nation, many of whom have lately brought the Art of Printing to great perfection. (121)

As Thomas Bewick said of his old Newcastle friend, “William Bulmer . . . was the first that set the example, and soon led the way, to fine printing in England” (16). The printer John Nichols defined “what is technically called Fine Printing” as consisting in

new Types, excellent Ink, improved Printing Presses, a sufficient time allowed to the Pressman for extraordinary attention, and last, not least, an inclination in the Employer to pay a considerably advanced price.—Mr Bulmer’s example was successfully followed by Mr Bensley; and Fine Printing is now performed by every Printer of respectablility in the United Empire. (43—see illus. 1)

Bulmer and Bensley were largely responsible for what has been called “this brief Golden Age” of English printing (122). In particular, in Bulmer’s editions of Milton and Shakspeare for Boydell, “the letterpress text is a splendid typographical achievement” (142).

Lawrence Greatrike & his partner George Stafford2 who lives in Crane Court Fleet Street came & dined with me—he told me that beside the two founderies of Caslons3 & one of Frys,4 there is one owned by Stevenson5 & another by [space] making 5 in all,6 that Martin is confined to cut for Bulmer only—that all are cut on the same body as Fry’s, but that the rest are not generally so plain—that the Scots foundery—Willsons[?] furnish the best types—that Fry employs Birmingham cutters, that the difficulty lies in fixing the Matrisses so as to make the bottoms of all the Letters even—who also is making the metal.
he further informs me that Fry lately sent out a pearl bible ready cut for some house in Philad.a or New York, that it is easy to have it; that the price of good printing is very little inferior [sic] to the common—gave me Specimens of his Edition of the Encyclopedia—& of Johnson’s dictionary—talked with Greatrike ab.t paper making, he thinks that the bleaching very much injures the screen[in]g[?], shewed me sundry Specimens some made on a new kind of wove mould, gave me also an acct of the Mills in France—7

Peter Isaac’s book is an admirable biographical and commercial history of Bulmer, with particularly important chapters on “The Shakspeare Printing Office,” “Influential Support,” his “Publishers,” “Bulmer as Employer,” and “Fine Printing.” These sections are so solid that they may confidently form the foundation for future studies of Bulmer and his contemporaries. My greatest regret is that there is no table of the 43 reproductions which exemplify so much of the beauty and accomplishment of Bulmer’s work.

An indication of the intricacy of the printing business—and of Bulmer’s generosity in dealing with his creditors—may be seen in a letter in the Huntington (partly quoted on 84-85) which Bulmer wrote to the firm of Cadell & Davies:

Shakspeare Printing Office
July 9th 1812
Gentlemen,
Though I cannot help feeling the very unpleasant situation in which you are placed with regard to the History of Dublin, and know that it is not the usual practice for a Printer to call for settlement of his account for an unfinished single volume, yet under all the circumstances begin page 96 | ↑ back to top of the case, I feel myself compelled to apply to you for cash on account, or for a bill at a short date, for the above work.—The History of Dublin was begun nearly 4 years ago; and my charge upon it, up to October last, is nearly 250£. since which period not one single sheet has been printed: and to add to the inconvenience I have had to keep standing 4 whole sheets of the Work, in which are several tables, and 6 separate folding tables besides.—These sheets & tables, though they abound in sorts we are in daily want of in the common course of business, I will still endeavour to keep standing in their present states, provided you have hopes of the Author’s shortly proceeding with the work, but I cannot really do so much longer.
The coarse proofs of the standing matter are inclosed, which I will thank you to return, to prevent accident.
I am, Gentlemen,
Your’s very truly
W Bulmer
Mess Cadell & Davies

In 1812, Bulmer had been waiting almost four years for any payment for the very substantial amount of work done—and he may have had to wait six more until the work was finally published.8↤ 8 Bulmer must have been used to waiting for payment; for instance, according to the promissory note of 9 Jan 1804 (National Book League), he was not paid his £43.18.6 by Cadell & Davies for printing William Marshall’s On Planting [3rd edition, 1803; Isaac, p. 160] until “Six Months after Date”, i.e., 9 July 1804. Almost equally awkward, he had had to keep four quarto sheets (32 pages) plus six tables (including small sorts of type which were in short supply) in standing type, presumably because they had not yet been corrected.

The work in question is J. Warburton, J. Whitelaw, Robert Walsh, History of the City of Dublin, from the Earliest Accounts to the Present Time (London: Printed for T. Cadell and W. Davies, in the Strand, by W. Bulmer and Co. Cleveland-Row, St. James’s, 1818), 2 vols., quarto. Whitelaw had taken over materials about Dublin from the late Mr. Warburton, and when Whitelaw died in 1813 there was evidently a pause before Walsh took up the reins. There was some delay in getting on with the work even after Bulmer’s letter, for the only typographical folding plates (1: 648) is watermarked “1816” in the Huntington copy. Apparently some sheets of The History of Dublin had been printed for almost six years before the work was published, and Bulmer’s type and paper were tied up for years at a time producing no benefit to him. Bulmer’s forebearance in the circumstances seems very remarkable.

Peter Isaac has been publishing works on William Bulmer for over 30 years, beginning with Checklist of Books & Periodicals Printed by William Bulmer (1961), with a First 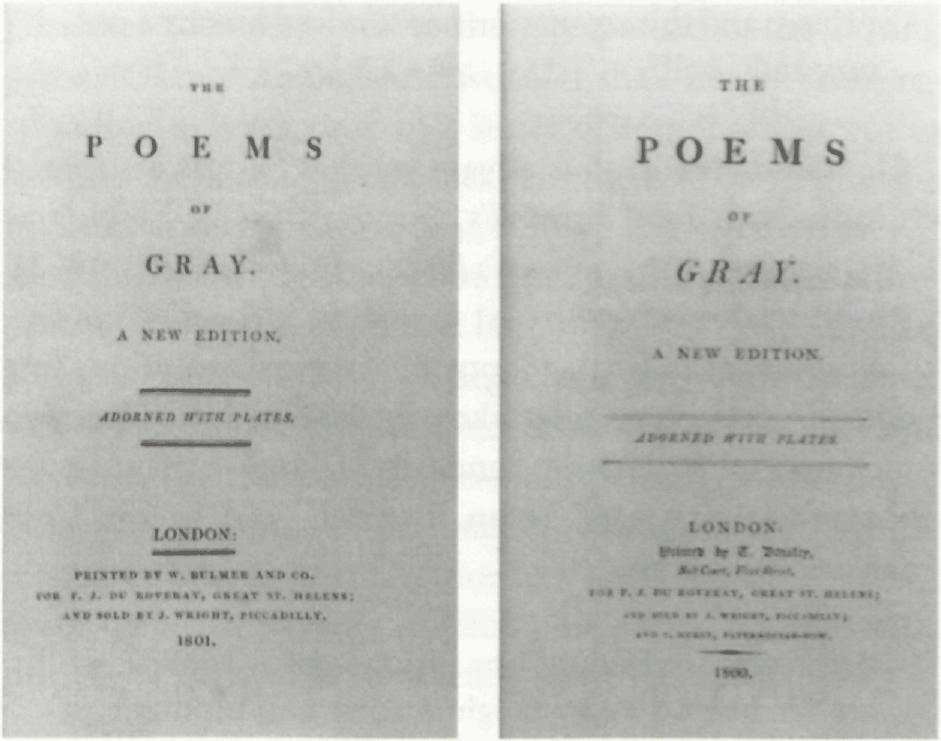 1 Titlepages of The Poems of Gray Adorned with Plates printed by Bensley for Du Roveray in 1800 <GEB> on the right and by Bulmer ostensibly for Du Roveray but in fact for J. Wright in 1801 <GEB> on the left.   Both titlepages are exceedingly simple and handsome, that by Bensley more delicate and feminine, with italic type, longer rules, and better balance, that by Bulmer more bold and masculine, with shorter and more prominent rules and less variety of size and face.

Du Roveray had “sold Wright the Plates,” and he was therefore astonished, when he “accidentally saw . . . Copies of Gray in a bookseller’s Shop,” to find his name still on the title page of Wright’s edition. He wrote indignantly to Bulmer in September 1801 about the “unwarrantable” “liberty that has been taken with my name in stating on the title-page of the books that they have been printed by my orders, or for me .... Why not to render the deception complete (for a deception has been clearly intended) state likewise that they were printed by Mr Bensley? One falsehood is as easy to justify as another” (quoted from the MS in Harvard; it is also given on Isaac, 88-89). Bulmer’s reply is not known.
Supplement (1962), a Second (1973), and a Third (1986), and culminating in the Sandars Lectures at Cambridge (1984),9↤ 9 The lectures were sent to friends as William, Bulmer, 1757-1830: ‘Fine’ Printer: Sandars Lectures, 1984 (1984), 49 pp., organized in a manner quite different from the 1994 book. which are supplemented in his 1994 book with a checklist (145-79), expanded yet again, of works Bulmer printed.10↤ 10 In 1994 books are numbered 1-593, serials as 1-141, Publications of the Board of Agriculture as 1-58, and R.H. Evans Auction Catalogues as 1-7, but intercalated numbers make the totals much higher; for instance, 45 Evans catalogues are listed. The 1961 list had 381 entries. Despite the splendid extent and comprehensiveness of this list, it would be surprising if it could not be enlarged.11↤ 11 Note that it is not always easy to find works in the list. For instance, Thomas Park’s Cupid Turned Volunteer (1804) is listed under “Elizabeth, Princess”, the designer of the prints; Thomas Williamson’s Oriental Field Sports, oblong folio (1807), 4° (1808), is oddly listed under Edward Orme, who was merely the supervisor of the engravings; and Ovid’s Metamorphoses (1819) and other works are listed only under the Roxborough Club. The supplemental works below are merely those begin page 97 | ↑ back to top turned up from a Huntington handlist of Bulmer:

1 Claude Gelée, dit Le Lorrain. LIBER VERITATIS; | OR | A COLLECTION OF PRINTS, | AFTER THE | ORIGINAL DESIGNS | OF | CLAUDE LE LORRAIN; | IN THE | COLLECTION OF HIS GRACE THE DUKE OF DEVONSHIRE |EXECUTED BY | RICHARD EARLOM, | IN THE MANNER AND TASTE OF THE DRAWINGS. | TO WHICH IS ADDED | A DESCRIPTIVE CATALOGUE OF EACH PRINT; | TOGETHER WITH | THE NAMES OF THOSE FOR WHOM, AND THE PLACES FOR WHICH THE ORIGINAL | PICTURES WERE FIRST PAINTED, | (Taken from the Hand-writing of Claude Le Lorrain on the Back of each Drawing) | AND |OF THE PRESENT POSSESSORS OF MANY OF THE ORIGINAL PICTURES. | - | VOLUME THE FIRST[-SECOND]. | LONDON: | = | PUBLISHED BY MESSRS. BOYDELL AND CO. CHEAPSIDE. |PRINTED BY W. BULMER AND CO. CLEVELAND-ROW. [?1791] Folio, 2 vols. with 200 prints, and a supplementary volume PRINTED BY JAMES MOYES (1819). N.B. The title page exists in at least two different forms; one of them specifies “two hundred prints” “Published by the proprietor, John Boydell, engraver, London, 1777” (ESTC lists copies in the Ashmolean Museum [Oxford], British Library [3], Dalhousie, Gottingen, Newberry Library [2], Michigan, John Rylands Library [University of Manchester], U.S. National Gallery, and Yale—none seen by me), and this can have nothing to do with Bulmer, who was not in business at the time. The second form, as above, is almost certainly in or after 1790 (when Bulmer began paying rates at Cleveland Row [Isaac p. 25]) (4 copies seen in the Huntington <129352; 281823; 295025; Art Gallery fn C1135 G3A3>). This Bulmer titlepage is not listed in ESTC, NUC, and elsewhere, but I wonder whether some of the sets located there, uniformly dated “1777” (the date of Boydell’s dedication) are not in fact the Bulmer printing.12↤ 12 Claude’s Liber Veritatis[e] Vol. I-II (n.d.) is listed in Isaac’s first Checklist (1961), the Second 1973, p. 8, #143), and the Third (1986, p. 10, #143), but it dropped out of the 1994 list because, as Professor Isaac tells me, when he checked the British Library copy he found that it did not bear Bulmer’s name.