Bentley’s labors, both here and in Blake Books, Blake Records and Blake Records Supplement, have been hugely important to the expansion of Blake studies. It’s surely not too fanciful to trace back to Bentley’s foundations the original impulses behind the new “Superbibliography” of Essick begin page 47 | ↑ back to top 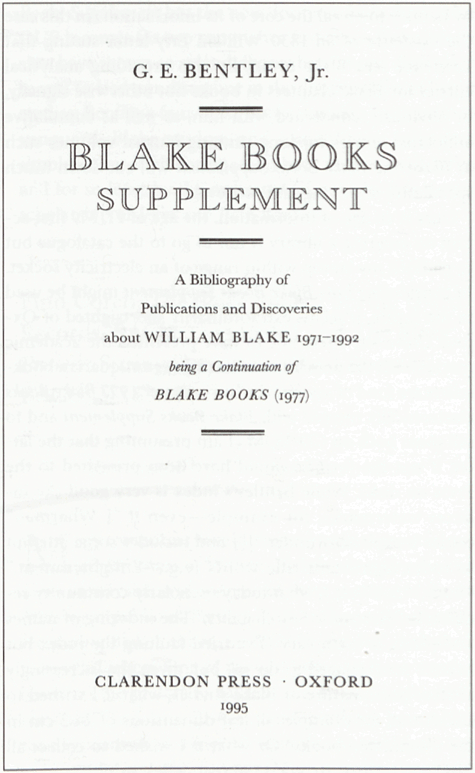 and Viscomi (although their scholarship has always been more than that, of course). Such is the complexity of Blake’s work (drawings, watercolors, oils, various processes of engraving, manuscripts, multiple “originals” of illuminated books, etc.), and so rapid has been the expansion of romanticism’s centrality within English studies during the 1960s and now the 1990s, that it always had urgent need of being firmly grounded in critical empiricism. If it becomes the case that the six or seven canonical writers diminish to a rump as future critical interest in them dwindles, Blake may endure as the only one whose complex textual materiality will be certain to ensure that he remains unco-opted into any newer, broader and more democratic cultural histories of the period. What might make sense as an argument about Blake’s life as a writer may make less sense about his work as an artist, and vice versa. However that develops in the future, Bentley’s two Blake Books volumes enable us to visualize, at a glance, not only the totality of Blake study but also to glimpse its developmental process. It will be no surprise that the column of index inches (centimeters if you must) devoted to Keynes and Erdman are now much reduced, their primacy overtaken (“neck and neck” as horseracing commentators would have it) by Essick and Bentley himself. But our colleagues do not jockey, for it has long been thanks to the collective labors of Bentley, Essick, Dörrbecker (and many others), that the Blake Books themselves have been continually updated by the rapid annual bibliographies and checklists which appear here in Blake. As a community of scholars we continue to have much to be grateful for.

As Bentley realized a long time ago, and the rest of us somewhat later, the study of Blake is a uniquely complex activity because the abundance, technical complexity and material diversity of Blake’s original artifacts is combined with a dearth of “literary” information about his life. We have all, at one time or another, leapt upon a dated “WB inv” monogram to bolster some favorite—if more or less shaky—hermeneutic about his life or work, but the materiality of the artifact, the principal domain of the bibliographer, has increasingly tended to trounce us. We all now know, for example, that only some of the big Tate Gallery color prints dated by Blake “1795” might be dateable to 1795—since some of the paper is watermarked 1803—but now, it seems, in the absence of anything more convincing, we must also learn not to call Hecate “Hecate.” Such are the things bibliographers (and gallery curators) do to us, and it hurts. Although Blake Books Supplement confines itself explicitly to primary and secondary written records, the adjacent domain of art history will frequently converge with the literary bibliographies when the act of interpretation confronts the status of the archive. Ultimately, what we need is a Supplement to the Supplement, with Butlin and Bentley butted end to end, so to speak, collating the array of materialities connected with Blake. As it is, Bentley’s book is our latest (and best) stab at attaining this essential empirical control over Blake. And such control is needed if we are to have some chance of curbing our own excesses, errors and omissions as scholars.

How professional were we that we missed noticing that copies E-H and H-K of There is No Natural Religion were Victorian facsimiles (139)? Or, if confirmed, how did we—until 1991—fail to notice a whole set of 1809 silver buttons with Blake’s portrait appearing amidst those of Nelson, Pitt and other luminaries in that crucial Descriptive Catalogue year (3)? And what of the so-called “Felpham Rummer” inscribed “Blake in Anguish Felpham August 1803” (70-72, pl. 2)? A glass goblet is solid enough, surely? Yet we missed it, and much else. Unless you have at your elbow a complete run of Blake’s back to 1977 (with past bibliographers Thomas Minnick and Detlef Dörrbecker giving way to Bentley himself), then Blake Books Supplement will be essential at your desk keeping you informed about the totality of artifacts involved in modern Blake studies. Its user will even extract oddments of innocent humor such as finding, for example, that (exotically), the Journal of Aesthetics and Art Criticism is indexed next to the Journal of Aoyama Gakuin Women’s Junior College. Much like Bentley’s photographic dressing, in a recent issue of Blake, of Blake’s life begin page 48 | ↑ back to top mask with his recently discovered spectacles (speculative spectacles, strictly), we can never be quite sure of the extent of this impish fun.

One of the most valuable sections of Blake Books Supplement is that devoted to newly recorded and newly traced copies of the illuminated books. The former includes, for example, a census of information on the German and Austrian “Lambeth” books discovered by Dörrbecker in the 1980s while the latter includes many new details of Blake’s mid nineteenth-century provenance. In the light of the “Superbibliography” with its careful interpellation from artifacts, it is now of significance that Bentley records as “Newly Recorded Copies” no less than seven individual plates and one “Newly Traced” copy of plates from Jerusalem copy J. Similarly, if less dramatically, Bentley methodically records new editions of books containing Blake’s commercial engravings and gives, for example, new locations of editions of his Blair’s Grave, including details of contemporary announcements about its publication. On their own these are matters of minor moment but cumulatively, when enriched with other similar notes, they enable us to gauge the extent of Blake’s contemporary circulation and help us visualize Blake-the-craftsman as well as Blake-the-visionary. Further help, usually in the form of addenda to the 1977 Blake Books, is also provided in the form of tables of new Blake titles and copies, lists of stab holes, collections, details of location and ownership, plate sizes, watermarks and reproductions (including reprints before 1863). Of course, this information is augmented, inter alia, by details of dimensions, color, binding orders etc.

As one might expect, over half of Blake Books Supplement is given over to a straightforward bibliography of Blake criticism, mostly postdating the first Blake Books but also filling in many of that volume’s bibliographical escapees. The global coverage is impressive with articles, books and theses recorded in most of the major and minor European languages (viz., Catalan as well as Spanish) in addition to emergent but identifiable Indian and Japanese bodies of scholarship. As one might expect, although the entries include newspaper and other ephemeral publications, the core of the bibliography of criticism consists of the mainstream output of academically oriented books and journal articles with the listings frequently bearing Bentley’s own annotations. Many of these are short synoptic quotations from the works themselves but he quite often provides his own analytical comments, sometimes including evaluative judgements about style (e.g., “rambling,” “severe”) or content (“wonderfully inaccurate,” “masterful,” “conventional,” “highly sophisticated,” “rudimentary”). More frequently, however, Bentley’s comments (not nearly as starkly reductive as I have presented here) provide a true analytical annotation, by which I mean that they elucidate information from otherwise unrevealing titles. For example, Robert Essick’s 1978 Notes & Queries piece, economically titled “William Blake and Sir Thomas Lawrence,” is annotated by Bentley to reveal the core of its information (in this case the existence of an 1830 William Etty letter stating that Lawrence sent Blake £100). By also providing analytical entries for Blake chapters in books not otherwise signally, or obviously, concerned with him, as well as cumulative annotated entries for long running journal volumes such as Blake, the Blake Books Supplement will cut down much speculative searching and retrieval.

Ours is an age of information, the age of IT. My first action on entering a library is not to go to the catalogue but to padlock my laptop within range of an electricity socket. In considering how Blake Books Supplement might be used in the future, it seems extraordinarily shortsighted of Oxford University Press not to have presented the academic market with the possibility of having (as antiquarian booksellers are fond of saying) the “very scarce” 1977 Blake Books electronically merged with Blake Books Supplement and to sell them both on CD-ROM (I am presuming that the latter, if not the former, would have been presented to the Press on disk). While Bentley’s index is very good (he indexes watermarks, for example—even if “J Whatman” comes inexplicably under “J”) and includes some attempt to index significant title words (e.g., “Enlightenment,” “Body,” “Self” etc.), what today’s scholarly community requires is “Electronic Searchability.” The indexing of names and places is exemplary (I’ve tried faulting the index but haven’t yet managed to do so) but, given the increasingly artifact-based nature of Blake studies, what if I wished to search out, for example, all leaf dimensions of 24.3 cm in the illuminated books? Or what if I wished to collect all Blakeana relating to, say, 1890 (e.g., sales, exhibitions, editions, articles, books)? Or, quite simply, to find all references to “woodcut,” both in the section on original works and in the titles or annotations of the critical bibliography? While I recognize that the physicality of modern scholarly practices are often curiously asymmetrical (why is it that I always padlock my laptop but never my Bentley?), the types of research Blake Books Supplement might potentially support is far greater than the abilities of a paper index to serve. It is also difficult, but necessary, to incorporate information from the old Blake Books and merge it with the Supplement (I am thinking, in particular, of provenance details and physical descriptions of the illuminated books). The Supplement tends to assume ownership or sight of Blake Books exactly at those points where other databases (e.g., MLA, ABELL) cannot be of much help. To such wistful electronic mergers we might also add The Marriage of Blake Records and Supplement. It seems a pity that such a Herculean set of labors, and such wonderful achievements as Blake Books/Records/Supplements should be confined to the archaic and undemocratic world of print. Perhaps enlightened opportunism at Oxford University Press might persuade them of the economic potential of selling, either in CD-ROM format or over the internet, not just Blake begin page 49 | ↑ back to top Books Supplement but the now dormant Blake Books: three OUP incomes for two copyrights. Just as the Blake internet sites have shown so splendidly, we have at our disposal the means to lead our discipline in the digitalization of literary studies: Bentley’s four Blake books ought to be there in the vanguard. Blake studies, and romanticism in general, should count itself fortunate to have been so well served, and for so long, by the dedicated (if not precisely devout) scholarship of Jerry and Beth Bentley.